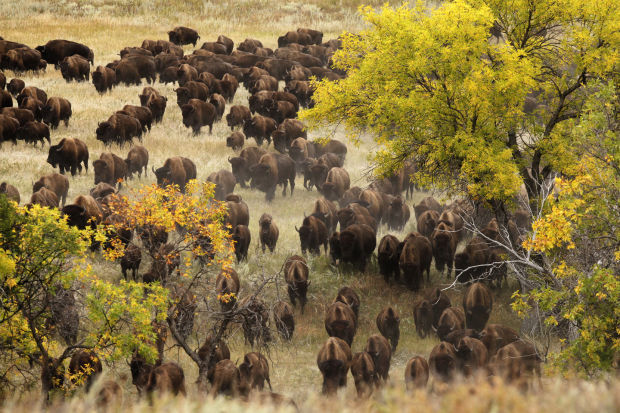 A herd of more than 1,000 buffalo makes the final push into the corrals during the 48th Buffalo Roundup in Custer State Park in 2013. 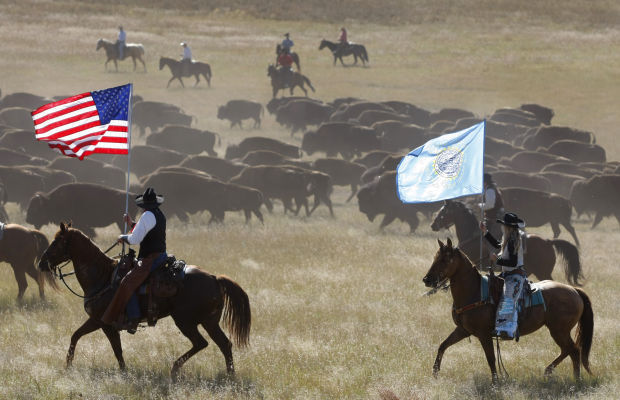 The United States and South Dakota flags are carried on horseback alongside the Custer State Park buffalo herd during the 49th annual buffalo roundup. 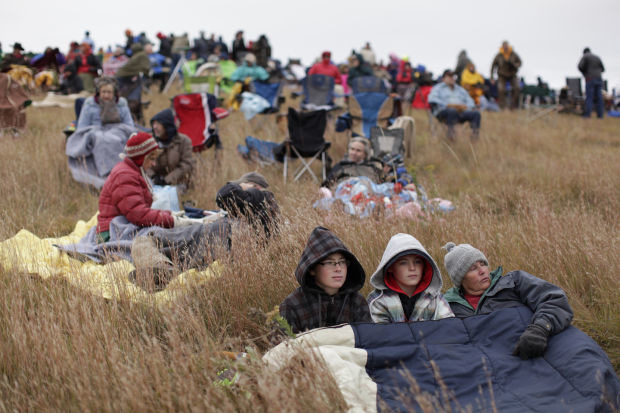 Visitors keep warm while waiting for the start of the 48th Buffalo Roundup in Custer State Park in 2013.

The crack of a whip and the slap of leather on leather by real cowboys and cowgirls driving a thundering herd of the most magnificent animals in the world.

The Custer State Park Buffalo Roundup is about as close to the Old West as you'll get.

This year’s 50th anniversary roundup, set for Friday in the park about an hour south of Rapid City, is an annual treat and even a bucket-list pilgrimage for thousands of park visitors, many of whom come from around the world to get as close as one can safely get to the legendary North American Bison.

A typical roundup draws about 15,000 patrons, but this year's milestone 50th could attract even more people to the region, showcasing the Black Hills and western South Dakota to people from across the world, and giving a late-season boost to the local tourism industry.

“There is a lure, a fascination with the Old West and visualizing what it might have looked like hundreds of years ago when there were millions of bison roaming the Plains,” said Craig Pugsley, head of visitor services at the park.

Pugsley has seen 38 of the previous 49 roundups, and it never gets old, he said.

“It’s a special experience for me. It almost brings a tear to your eye that you’re a part of the whole process,” he said.

Indeed, the roundup is all about proper management of the park’s estimated 1,300 head of bison.

“People enjoy it, but it also helps the species prosper and continue into the future,” he said.

Bison by the millions once roamed the Great Plains and were a foundation of Native American culture, but the coming of the white man to the region caused the species to be hunted to the brink of extinction.

Estimates counted fewer than 1,000 buffalo left by the early 1900s.

State Sen. Peter Norbeck helped the park, then known as the Custer State Forest and Game Sanctuary, obtain 36 buffalo from a private herd in 1914.

Park officials began selling down the herd after a range survey determined the park could manage no more than 1,450 buffalo. The first roundups were held to count and test the herd for diseases before auction.

Current management aims continue to keep the herd at no more than 1,450 animals in the summer during normal moisture years and between 800 and 900 in the winter.

Spring calving replenishes the herd, with between 200 to 300 bison sold at auction in November.

The annual roundup helps park managers determine which animals will be sold from those who will be returned to winter pasture in the park. The event has always been open to the public and Pugsley remembers when maybe 200 people showed up to watch.

In recent years spectator interest in the event has exploded with upwards of 15,000 people expected to jam two viewing areas north and south of the buffalo-handling corrals and pastures on the Wildlife Loop Road in the southeast corner of the park.

The late September influx of visitors is huge for the Black Hills economy, said Dave Ressler, executive director of the Custer Area Chamber of Commerce.

"A lot of small towns don't have much going on past Labor Day, but we're blessed that the roundup extends our season to the end of September. All of our hotel rooms are full," Ressler said.

Pugsley likens the traffic early on roundup day to the final scene in the Kevin Costner fantasy movie “Field of Dreams,” where cars are lined up at dusk to get to Costner's baseball diamond built in an Iowa cornfield.

“What’s the phrase, ‘If you build it, they will come’? That’s what it looks like at the north and south parking areas, just lines of headlights three miles long in all directions,” he said.

And it was another Costner movie filmed in South Dakota, the 1990 Oscar-winning epic “Dances With Wolves,” featuring an exciting buffalo hunting scene, that captured the attention of the world and revived interest in the American Bison, Pugsley said.

The park and state tourism organizations wanted to capitalize on the spotlight the movie brought to the state, and added an arts festival to the roundup weekend in 1994.

Now the three-day festival, starting on Thursday, draws more than 100 vendors and features entertainment and education tents. To cap the weekend, the Crazy Horse Memorial north of Custer is hosting a fall Volksmarch on Sunday, Sept. 27, making this a four-day celebration weekend for the Black Hills.

Pugsley is expecting even more spectators for the landmark 50th roundup after two touring groups, the American Bus Association and the National Tour Association, spotlighted this year’s landmark anniversary roundup one of the top events in the nation.

“We’re anticipating the possibility of more motor coaches showing up this year than we have had in the past, and there’s always been a good number,” he said.

Pugsley said the park has increased the amount of parking space for tour buses in both the north and south viewing areas, which will be manned by 80 park employees and volunteers to keep traffic moving smoothly.

“Hopefully we’ll have enough space for everyone to enjoy the event from,” Pugsley said.

On the other side of the fence, park resource manager Gary Brundige is making extensive plans for a well-run roundup as well.

For Brundige and an experienced core group of riders and workers, the roundup is about as routine as it can be when dealing with a powerful two-ton beast with a mind of it own, capable of accelerating quickly to a top speed of 35 mph.

By now, most of the herd will have been enticed by the lure of fresh grass to ungrazed pastures through gates opened by park workers in the southern end of the park.

“We get the buffalo to come down there somewhat on their own and riders will clean up the stragglers,” Brundige said.

Many of the herd's mature bulls won't be part of the roundup, having moved away on their own until the fall mating season, called the rut.

About a week out from the roundup, riders will push the herd toward the eastern end of that southern pasture, directly south of the buffalo corrals.

Roundup day will bring about 60 riders and 15 vehicles for the final three-mile push of the buffalo to the corrals.

“The buffalo, with the exception of the calves, have been through this before. They kind of know the gist of things. But there’s always a few old cantankerous cows in there that have a different mind,” he said.

Brundige said it’s an art to keep just enough pressure on the leaders of the herd to keep those cantankerous lead cows and their calves moving toward the corrals.

“Once you lose the lead, it’s basically turn around and start over again,” Brundige said.

Once in the corrals, a few of the buffalo will be tested, vaccinated and branded on Friday, he said.

The remainder of the herd will recover from the stress of the roundup in fenced off pastures near the corrals until late October when cows and calves will be tested and sorted for auction or released to winter in the park.

Park officials are bent on making the roundup stress-free for the buffalo and enjoyable for the thousands of spectators.

“There’s a lot of organization going on, a lot of pressure to make sure things go right,” Brundige said.

Pick up the Rapid City Journal and visit rapidcityjournal.com this week for full coverage of the 50th annual Buffalo Roundup.

A 32-page special Buffalo Roundup edition of Black Hills to Go will appear in Thursday's paper.

Then, on Friday and Saturday, we'll provide full coverage of the roundup, with stories and incredible imagery captured from all sides of the event.

Basics of the Buffalo Roundup

Where: Buffalo corrals on Wildlife Loop Road in the southeast part of the park

Weather: The roundup has only been postponed twice, once for heavy snow and once because of fog, so be prepared for whatever South Dakota weather might throw at you with layered clothing, rain gear and sunscreen.

Parking: Parking lots open at 6:15 a.m. and close at 9 a.m. Attendees will need to decide on one of two parking/viewing areas prior to Friday morning. To get to the north parking and viewing area, head south from the Game Lodge area on Wildlife Loop Road. The south parking and viewing area is accessed by heading east on Wildlife Loop Road from the area near Blue Bell campground. After the roundup, all vehicles will depart the way they entered.

The actual roundup begins at 9:30 a.m. Guests must stay in the viewing areas until the herd is safely in the corrals, generally around noon.

Handicap accessible parking is provided in both viewing areas. Personal vehicles are not allowed in the corrals. Some people choose to walk, and there is a free shuttle service from the viewing areas to the corrals and back to the parking lots.

Concessions: Breakfast will be available at 6:15 a.m. in both viewing areas. Once the buffalo are rounded up, lunch is served at the corrals until 2 p.m. There is a fee for both meals.

After the roundup: Testing, branding, and sorting of a small number of buffalo begins at 1 p.m. and lasts until about 3 p.m. at the corrals. Crews will work the remainder of the herd beginning October 26.

Coronavirus testing tends to drop on holidays and weekends. It should come as no surprise that testing numbers would be small when a holiday a…

A herd of more than 1,000 buffalo makes the final push into the corrals during the 48th Buffalo Roundup in Custer State Park in 2013.

The United States and South Dakota flags are carried on horseback alongside the Custer State Park buffalo herd during the 49th annual buffalo roundup.

Visitors keep warm while waiting for the start of the 48th Buffalo Roundup in Custer State Park in 2013.