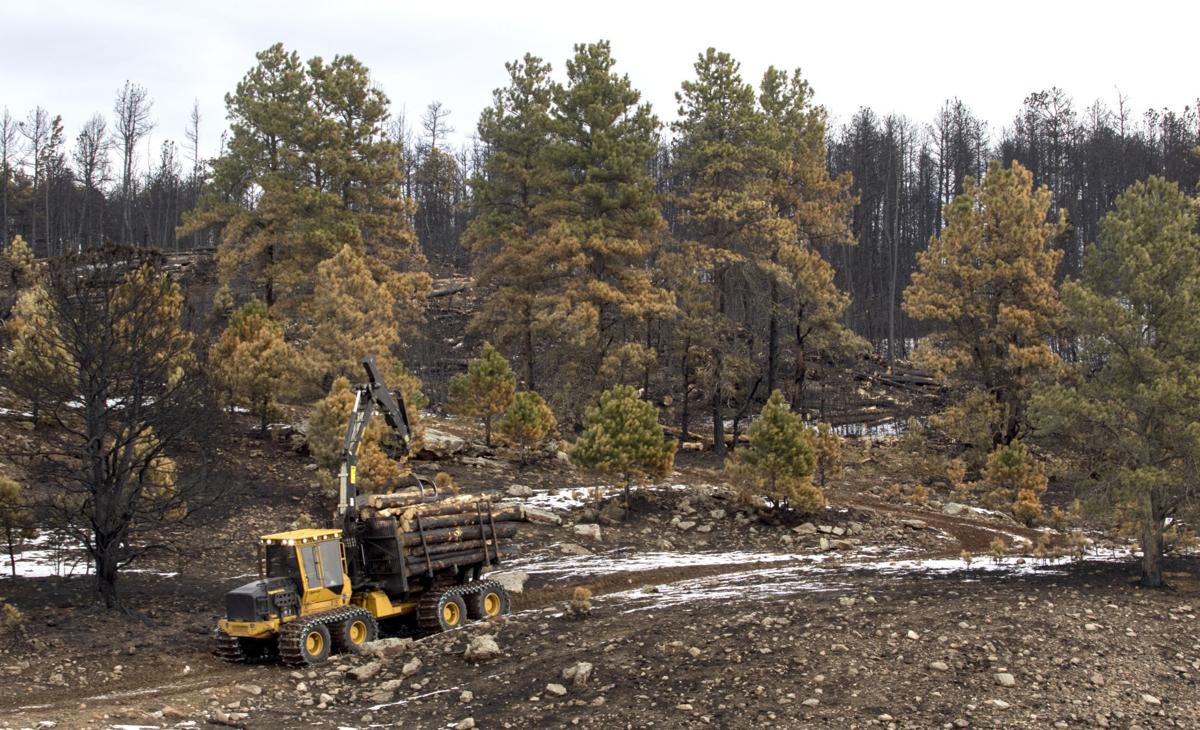 Custer State Park sold about 6,000 acres of timber damaged in the Legion Lake Fire. The timber was harvested from January to June. 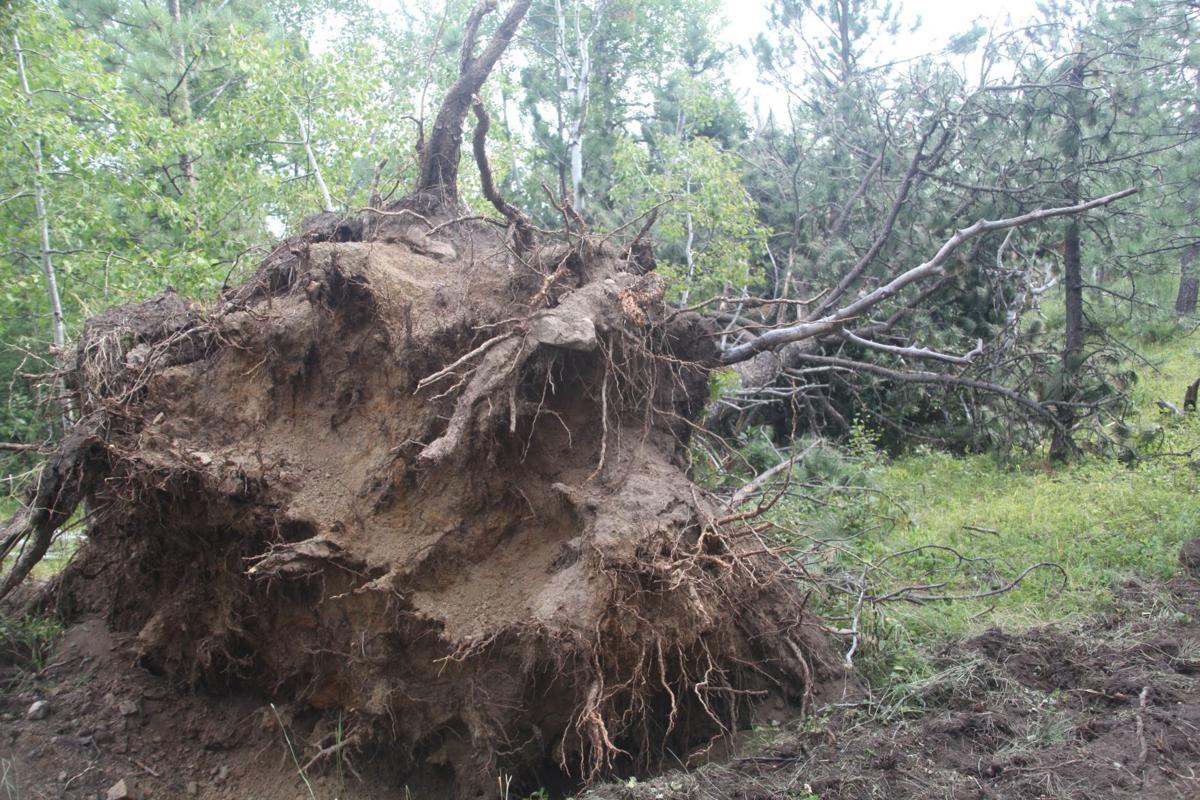 A June tornado created areas of downed and damaged trees in the northern Black Hills, where the Forest Service is working with logging companies to salvage timber.

Nearly 5,000 truckloads of timber that were salvaged from December's Legion Lake Fire in Custer State Park have since been processed into boards, wall paneling, frames for doors and windows, and other wood products.

And in the northern Black Hills, logging crews are working to salvage up to 1,400 truckloads of timber from a 19-mile swath cut through the Black Hills National Forest by a June tornado.

The Legion Lake Fire started Dec. 11 and spread from Custer State Park into Wind Cave National Park and onto private property, burning a total of 84 square miles of mixed forest and grassland.

The effort to salvage timber from the burned areas of the park began in January and continued until June. Four companies participated in the work and harvested a total of 4,939 truckloads of timber — comprising nearly 21 million board feet and weighing nearly 160,000 tons — from 6,000 acres of land in the park.

The total amount paid by the companies to state government for the timber was $303,615.95. Emily Kiel, spokeswoman for the South Dakota Department of Game, Fish & Parks, said the money will be used in fire-recovery efforts including road work, erosion control and fence-building.

The infusion of revenue will be a one-time occurrence, because the removal of so much timber from the park this year means there won't be as much timber to cut in the future.

“Long term,” Kiel said, “Custer State Park will see a loss in its commercial timber revenues of about $1 million over the next 10 years.”

Much of the timber went to Neiman Enterprises, which has facilities in South Dakota, Wyoming and Colorado. The other participating companies were the Morgan Sawmill, of Pringle; Sandford Logging, of Spearfish; and Lowell Swedlund Logging, of Custer.

Dan Buehler, resource manager of Neiman Enterprises, said most of the burned trees in the areas covered by the Custer State Park salvage operation were harvested.

“There were some trees left on the landscape due to excessive rot or steep terrain, but that was pretty limited," Buehler said.

Some of the burned bark on the timber had to be disposed, he said, but the fire’s effect on the timber's value was otherwise minimal.

Neiman processed timber from the park at sawmills in Spearfish, Hill City and Hulett, Wyo. The end products included 1x4, 1x6 and 1x8 boards, parts for door and window frames, and wood paneling. Bark that was not charred black was burned for boiler fuel or sold to another company that makes landscaping material.

Neiman Enterprises is also involved in salvaging timber from the northern Black Hills, where a June 29 tornado damaged trees in the Black Hills National Forest on both the Wyoming and South Dakota sides of the border. Affected areas included Cement Ridge, Surprise Gulch, Schoolhouse Gulch and Spearfish Canyon.

Jake Jackson, a Forest Service representative who oversees timber contracts in the Northern Hills and Bearlodge ranger districts, said the tornado crossed areas where three timber contracts were already in place with Neiman Enterprises. After the damage in those areas was evaluated, the focus of the contracts shifted to salvaging affected trees. Jackson said about 500 truckloads of timber have been salvaged from those areas so far, with a possibility for 300 to 500 more truckloads.

The Forest Service has since created two more timber sales for additional areas damaged by the tornado, and Jackson anticipates about 400 truckloads of salvage timber will be harvested from those areas.

In total, Jackson said perhaps 4 million to 5 million board feet of timber will be salvaged from the tornado-damaged areas.

Following a December wildfire, visitation from January to July at Custer State Park was down 1.7 percent this year compared to the same seven months last year.

The state Department of Game, Fish and Parks said it does not blame the downturn on December's Legion Lake Fire, because no campgrounds, day-use areas or resorts were damaged.

"We attribute the slight decrease in visitation to the cool, wet spring and summer as the area has received record-breaking rainfall," said a portion of a written statement from the department.

Today marks the one-year anniversary since The Legion Lake fire, which started on Dec. 11, 2017 and burned 84 square miles before its containm…

EDITOR'S NOTE: This is the second in a two-part series about the underlying causes of the ignition and spread of December's Legion Lake Fire. …

Corridors of Risk: Fire highlights the threat to power lines from outside right-of-way

Editor's note: This is the first of two stories about the underlying causes of the ignition and spread of December's Legion Lake Fire. Click h…

Legion Lake Fire among 41 caused by power lines since 2013

Power lines have caused 41 wildfires that have burned 57,151 acres in the Black Hills since 2013, according to statistics from the South Dakot…

A 5-ton tractor remained missing after nine tornadoes left a trail of damage across southeast Montana and northwest South Dakota on Thursday, …

Despite the weather, Buffalo roundup goes off without a hitch

One year after the massive Legion Lake Fire that burst out of Custer State Park, a scientist at the South Dakota School of Mines & Technol…

Custer State Park sold about 6,000 acres of timber damaged in the Legion Lake Fire. The timber was harvested from January to June.

A June tornado created areas of downed and damaged trees in the northern Black Hills, where the Forest Service is working with logging companies to salvage timber.