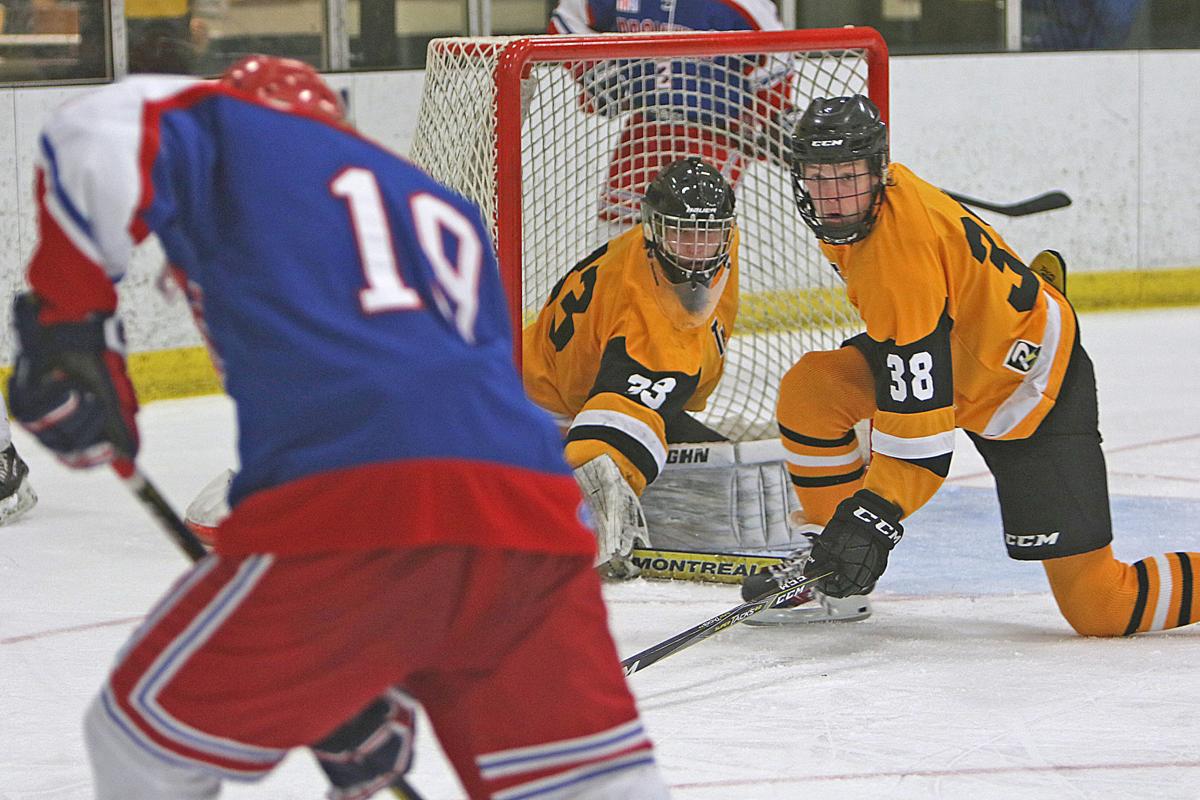 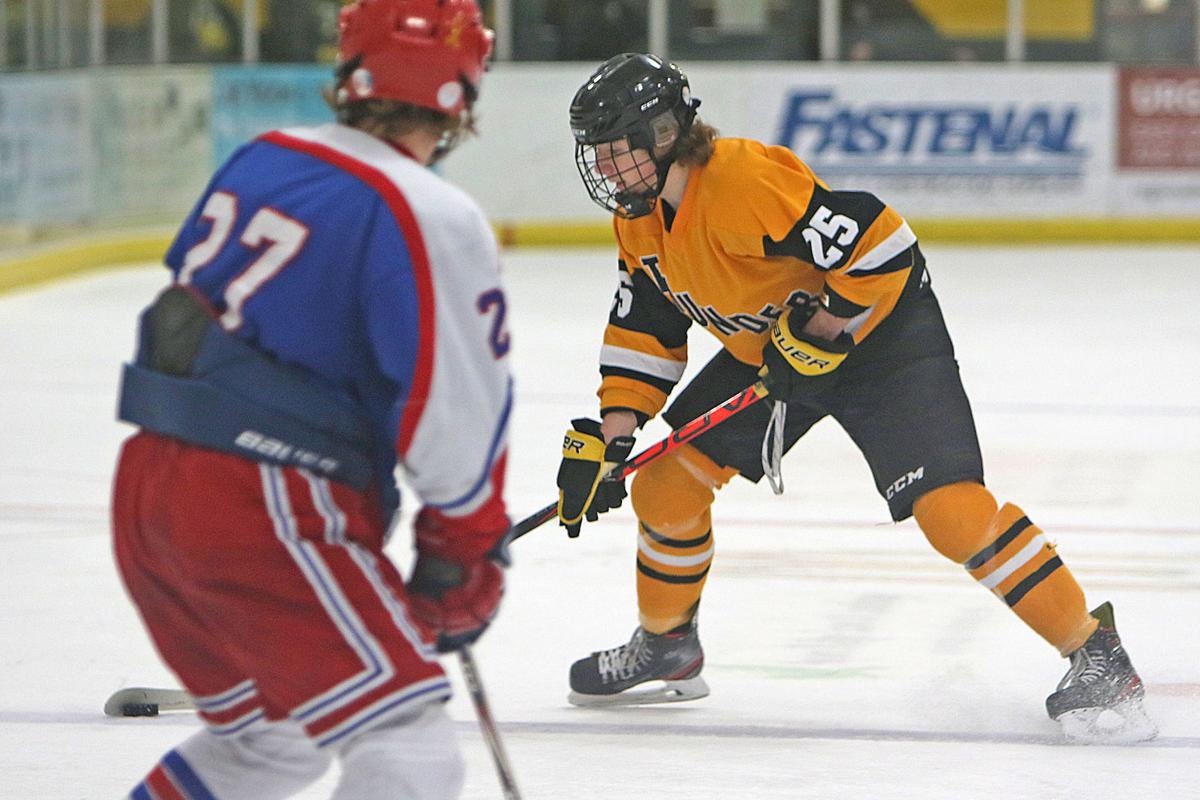 Rushmore Thunder defenseman Duncan Chisolm (25) settles the puck on the blue line before firing a shot on goal while Brookings forward Logan Bortnem (27) tries to block it during their SDAHA high school boys hockey game Sunday at the Thunder Dome in Rapid City. 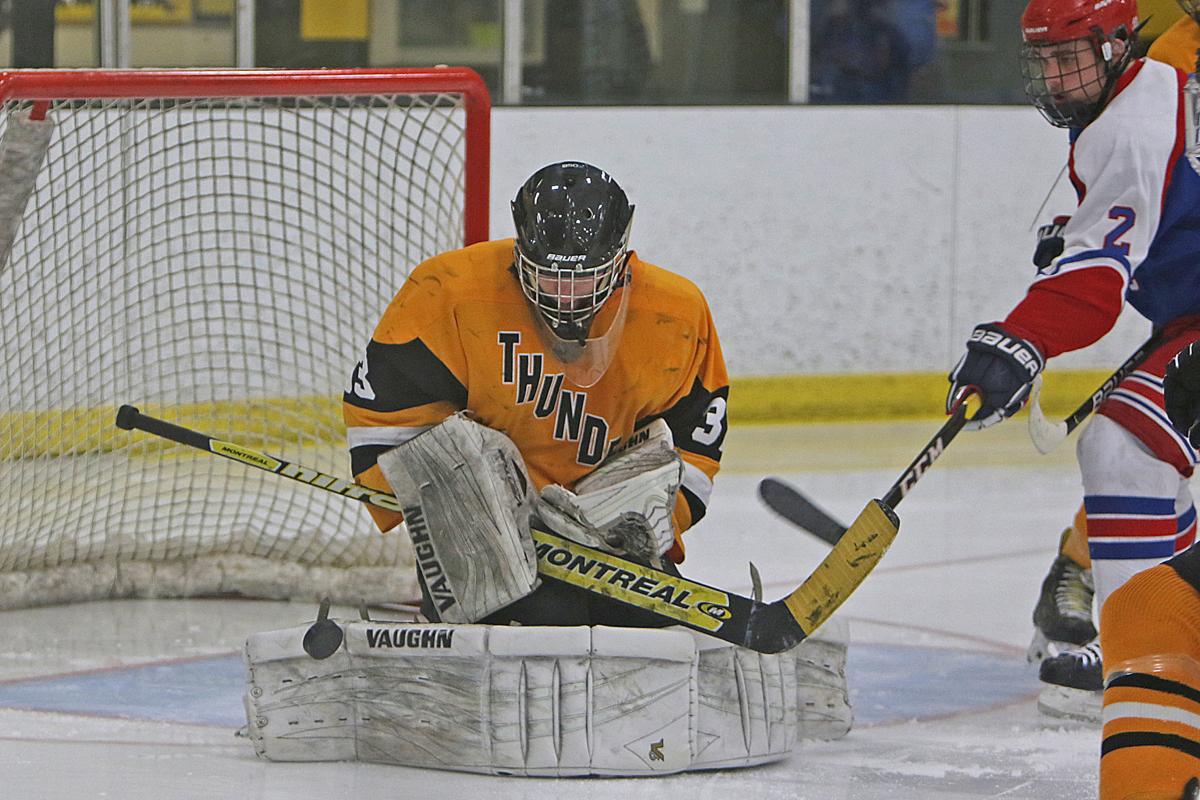 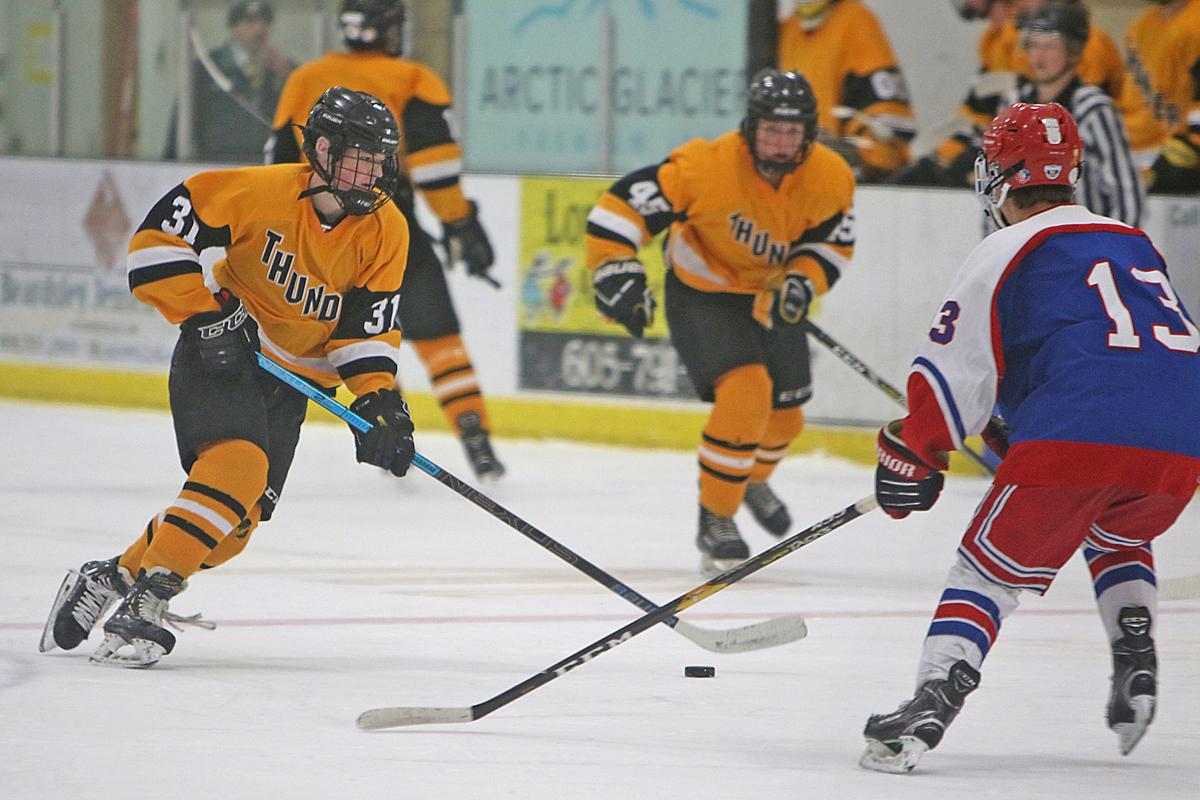 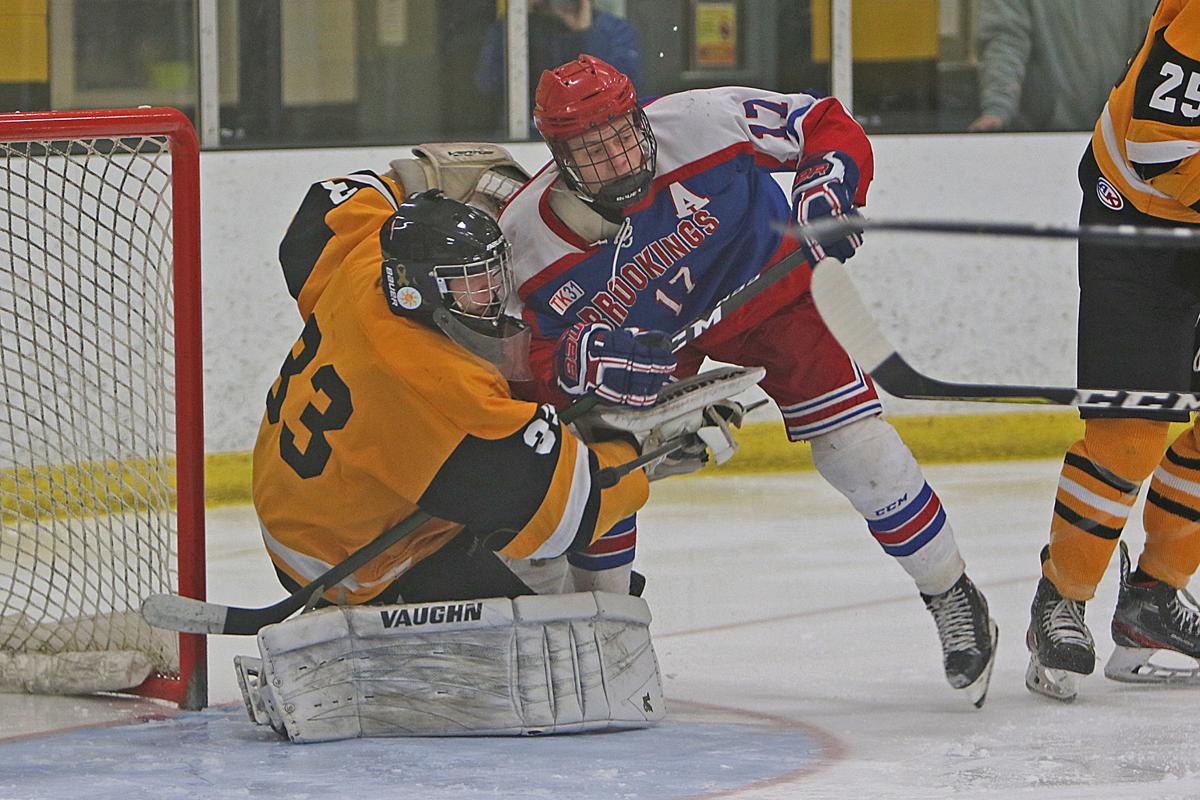 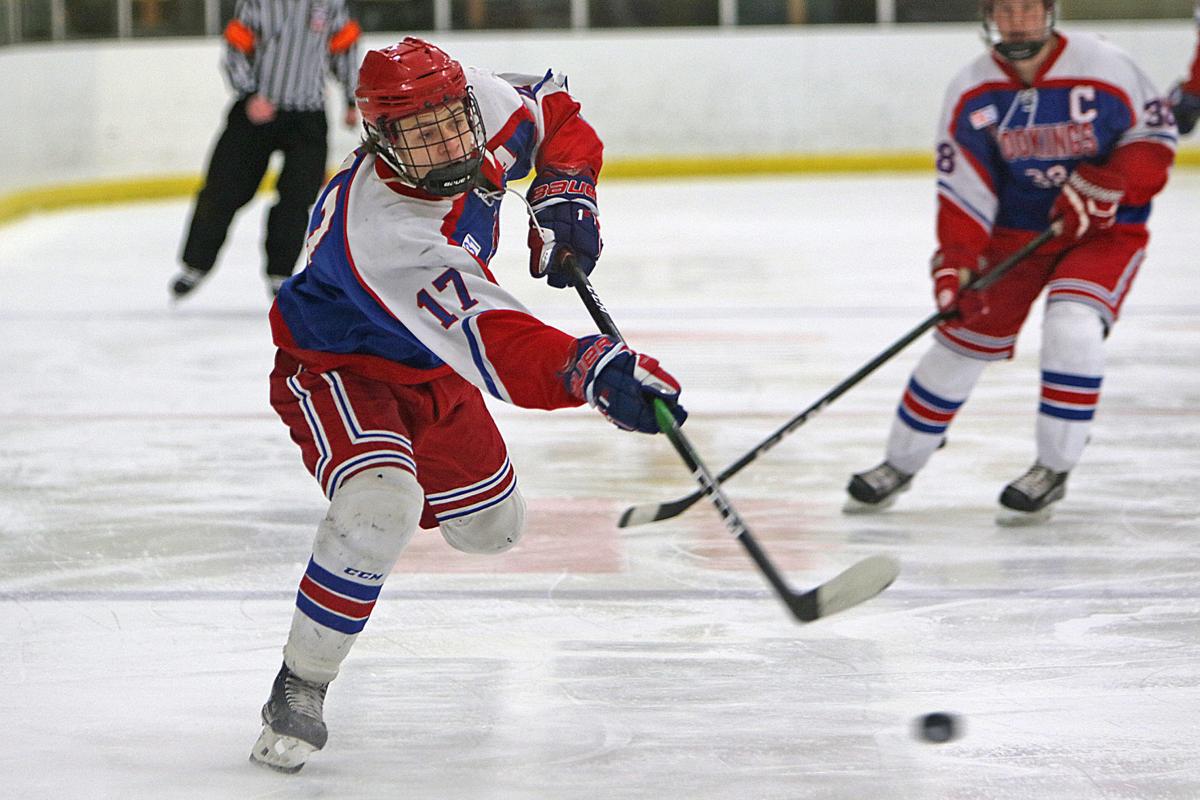 Brookings Ranger forward Maxwell Kjelden (17) fires a shot on goal during the Rangers’ SDAHA high school boys hockey game with the Rushmore Thunder on Sunday at the Thunder Dome in Rapid City.

Brookings got two goals from Breck Hirrschoff and one from Ashton Witte as the Rangers sent the Rushmore Thunder to their fourth straight loss with a 3-1 decision Sunday in SDAHA high school boys’ hockey action at the Thunder Dome in Rapid City.

Despite the losses to Brookings this weekend and Sioux Falls last week, Rushmore remains in fourth place in the boys’ varsity division with four games to play. The Rangers jumped into second place with five games left on their schedule.

“The biggest difference the last couple weeks was Brookings and Sioux Falls capitalized on their chances more than we did,” Thunder coach Brendon Hodge said. “We’re getting strong play in net, now we have to generate more scoring. Our forwards have to start bearing down and scoring.”

Hirrschoff, a forward who is in eighth-grade, deflected a clearing pass off his stick and gathered the puck to move in and score on Rushmore goalie Abe Partridge to score his first goal of the game at the 6:55 mark of the first period.

Witte pushed Brookings up 2-0 when he took a feed from Carter Shoup to score his 13th goal of the season with 2:29 left in the second period.

The Rangers extended their lead to 3-0 when Hirrschoff netted his second goal of the game and 10th of the season 3:16 into the third period.

Down 3-0 Zeke Farlee halted the shutout bid of Brookings goaltender Philip Kuechenmeister, who stopped 20 of 21 shots on his way to getting his sixth win of the season. Farlee scored his fifth goal of the year, an even-strength lamp-lighter off an assist by Hunter Walla to make it 3-1 with 10:38 remaining in the game.

Partridge stopped 25 of 28 shots Sunday and 37 of 40 shots in Saturday’s 3-2 loss to the Rangers, and was particularly good when Brookings was on the power play. Partridge kept the Rangers off the scoreboard late in the first period and early in the second while Brookings was skating 5-on-3 for 59 seconds with the Thunder’s Mason Martin and Seth Stock in the penalty box for minor penalties.

“Abe had another strong weekend for us,” Hodge said. “Most of the goals scored against us weren’t his fault. As a team, we have to give him more help in our defensive zone.”

Despite the losses, the Thunder remain in fourth place in their division with 20 points. Sioux Center, with 26 points, jumped into first place, leapfrogging idle the Sioux Falls Flyers No. 1 squad. Brookings, on the strength of a four-point weekend, also moved ahead of Sioux Falls, which has 24 points to the Rangers’ 25.

“How we bounce back from this is sticking together as a team and coming back this week and putting the work in to be successful,” Hodge said. “With only one game Friday, there should be no excuses this week with not being prepared.

“Just because we’ve lost four in a row doesn’t mean teams are going to feel sorry for us. The team needs to realize they need to put in the work at practice to be successful. It’s not going to be easy.”

The game starts at 8 p.m. at the Thunder Dome.

Rushmore Thunder defenseman Duncan Chisolm (25) settles the puck on the blue line before firing a shot on goal while Brookings forward Logan Bortnem (27) tries to block it during their SDAHA high school boys hockey game Sunday at the Thunder Dome in Rapid City.

Brookings Ranger forward Maxwell Kjelden (17) fires a shot on goal during the Rangers’ SDAHA high school boys hockey game with the Rushmore Thunder on Sunday at the Thunder Dome in Rapid City.