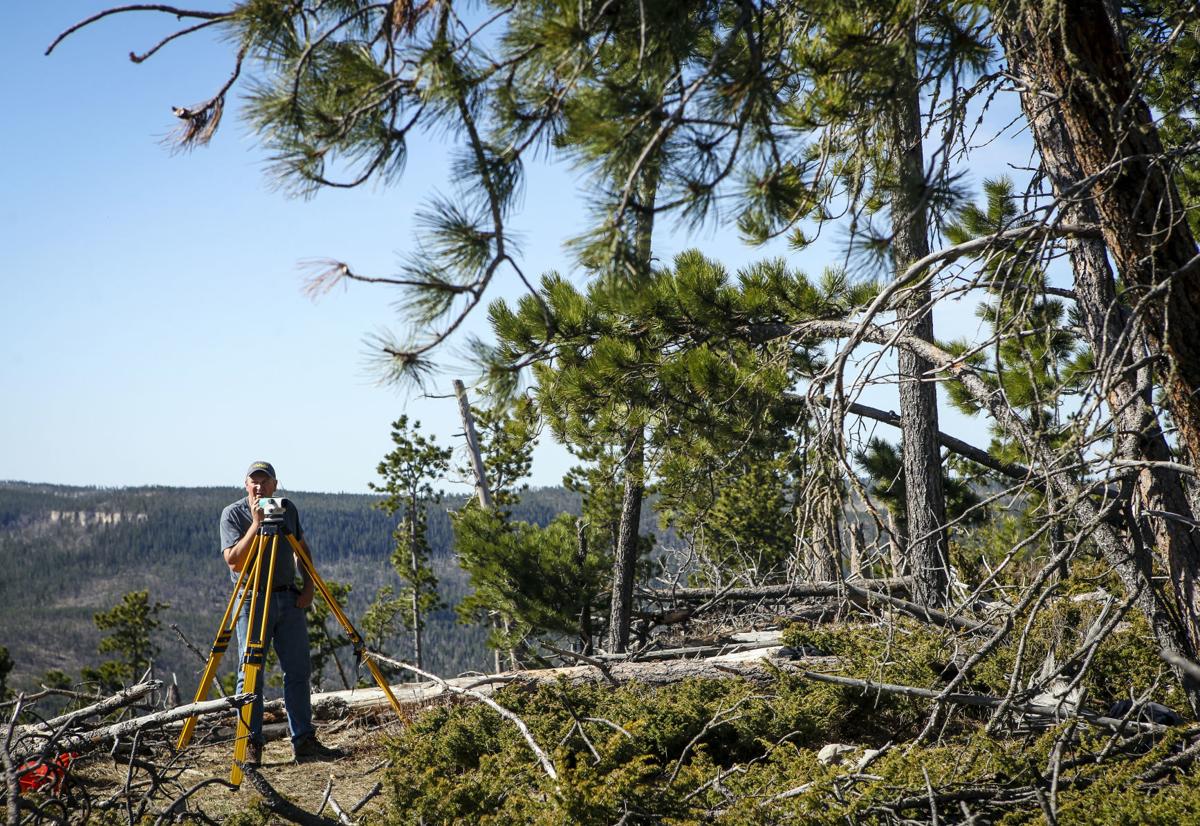 Jerry Penry uses a surveyor's level in May atop Odakota Mountain in the Black Hills National Forest. 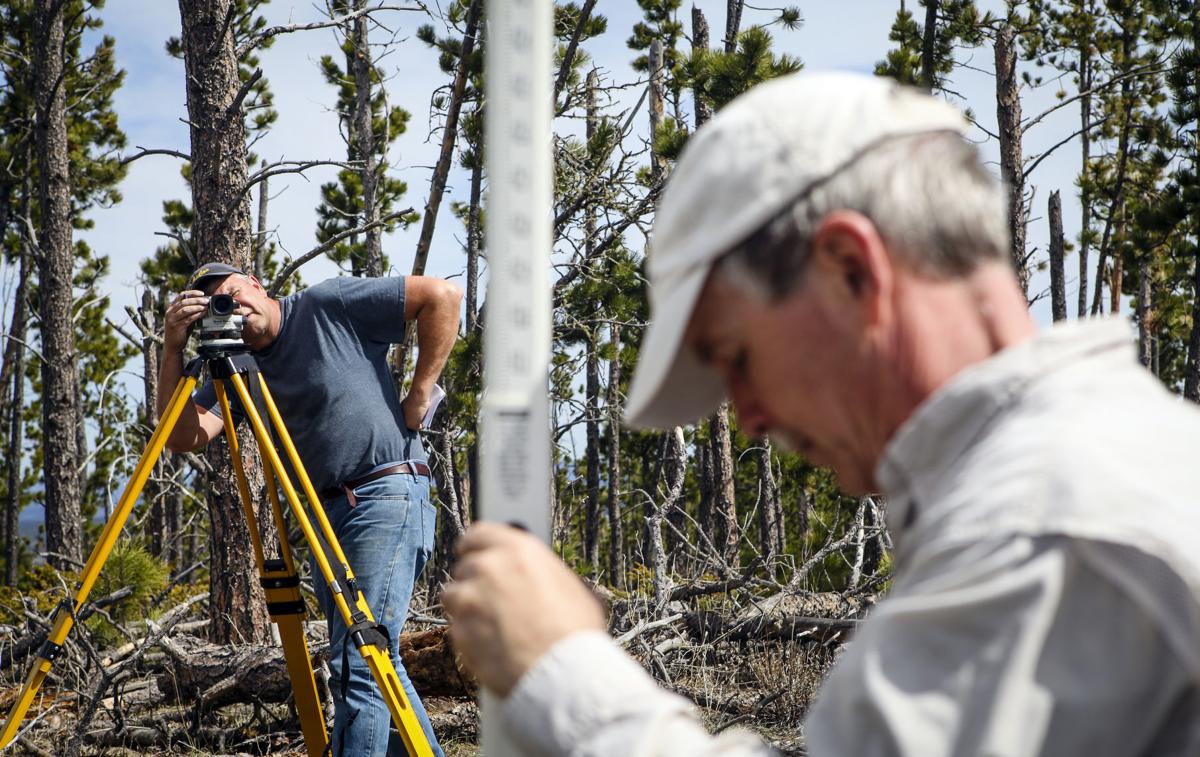 Paul Horsted, foreground, holds a leveling rod while Jerry Penry takes a reading with a surveyor's level in May atop Odakota Mountain in the Black Hills National Forest. 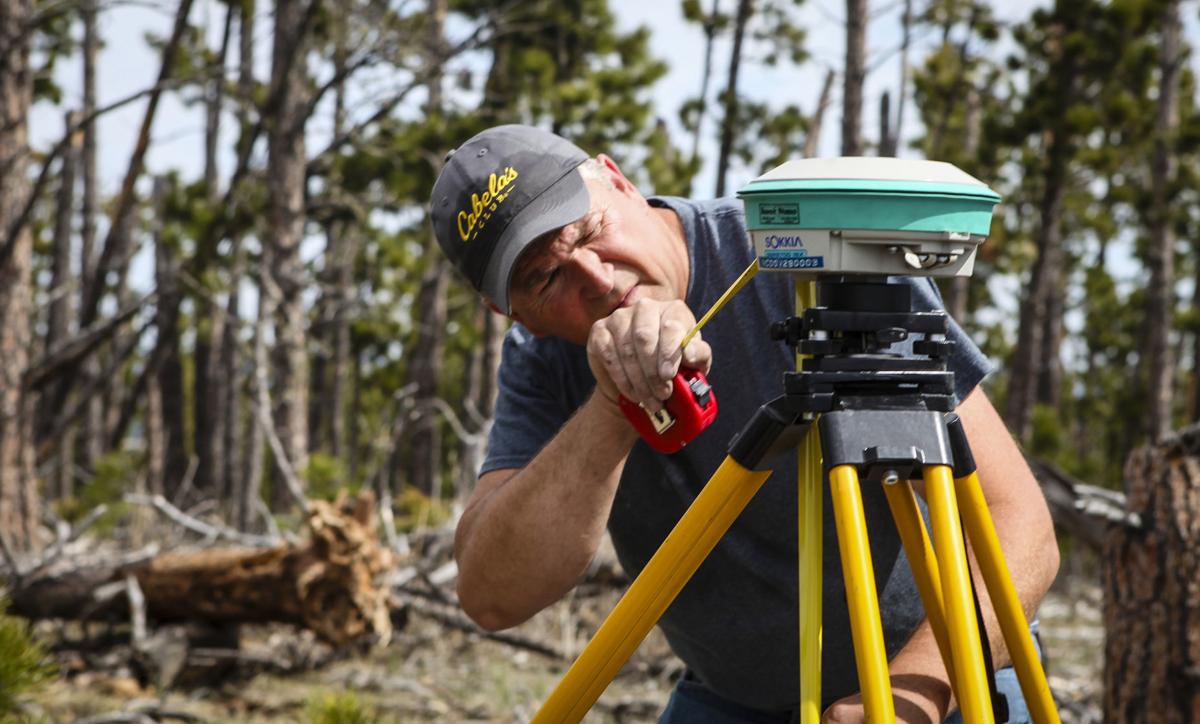 Jerry Penry sets up a GPS receiver in May atop Odakota Mountain in the Black Hills National Forest.

Jerry Penry has bad news for another one of South Dakota’s highest points.

Odakota Mountain, widely believed to be the second-highest place in the state, is a little lower than advertised.

Published elevations for the peak range from 7,200 to 7,210 feet above sea level. Penry, a professional surveyor, recently conducted perhaps the only modern survey of the mountain and pegged its actual elevation at 7,197.7 feet — about 2 to 12 feet lower than published figures.

That’s still high enough to rank No. 2 on the list of named South Dakota peaks. The No. 1 spot belongs to Black Elk Peak, which Penry surveyed in 2016 and found to be 7,231 feet, rather than the widely published 7,242 feet.

Penry is a 52-year-old professional surveyor from Lincoln, Neb., with a compulsion about precision. It bothers him that so many old and imprecise elevations — dating to the days before the Global Positioning System and other modern tools — are still on the books.

“We have the technology to get stuff right,” he said.

So, when he goes on vacation from his surveying job, he does more surveying. But he doesn’t always survey peaks. On other adventures, he has tracked down historical surveying markers and boundary monuments, and places as esoteric as the “pole of inaccessibility,” which is the farthest point from a coastline (in North America, that's in Bennett County, South Dakota).

Penry visited Odakota Mountain on a warm day in May. The peak is 45 miles west-southwest of Rapid City, by way of Hill City, Deerfield Road and a series of gravel and dirt roads.

From the final stretch of Forest Service road, it’s a hike of about a quarter-mile across snag-filled Black Hills National Forest land to the “mountain,” which is actually more of a flat prominence at the edge of a limestone plateau. The plateau runs north-to-south through the western Black Hills and includes several points above 7,000 feet in elevation.

The edge of Odakota Mountain is about 800 feet above the gulches below it, which makes for a grand view. Far off in the east, Black Elk Peak is visible.

“Odakota” is a Dakota Sioux word meaning friendship, alliance or a peaceful relationship, but the name was not bestowed on the mountain by Native Americans. The late Loretta Bradfelt, a white woman who co-owned land near the mountain’s base, proposed the name in 1968 and successfully petitioned the U.S. Board on Geographic Names to accept it.

On the day of Penry’s visit to Odakota, Paul Horsted, a well-known photographer from Custer, helped with the survey. They first set about determining the highest point on the wide, flat prominence of the summit.

Horsted manned the leveling rod, which looks like a sturdier and taller version of a yardstick, while Penry manned his surveyor’s level, which is essentially a scope on a tripod.

Here and there on the summit, Horsted set the leveling rod on the ground and held it up straight. Penry looked through the scope and read the numbers on the rod. Lower numbers indicated a higher point and vice versa.

Around and around the summit they went, crisscrossing back and forth over exposed rock and downed trees. Penry called out numbers and Horsted moved around dutifully, until they settled on what they believed to be the highest spot.

“Let’s do this routine one more time,” Penry said. “I do not want to be wrong.”

Finally, after definitively locating the high point, Penry set up a GPS receiver on a tripod and let it communicate with dozens of satellites in space for more than four hours. He ran the resulting data through the National Geodetic Survey’s Online Positioning User Service to determine Odakota’s true elevation.

A report from that service gave Penry a high degree of precision, but not quite perfection, which to him is the essence of surveying's appeal: its inexhaustible potential for ever-greater accuracy.

“In my estimation,” Penry explained in an email, “the elevation calculated should be within 0.10 feet.”

An eight-week series on the eight Black Hills peaks that stand 7,000 feet or taller.

How South Dakota's high point ended up shorter than thought

Jerry Penry knows South Dakotans might be disappointed to hear that their tallest mountain is 11 feet shorter than they thought, but he can't …

Black Hills National Forest officials are proposing to thin nearly 3,000 acres of forest in a portion of the southern Black Hills they say is …

Jerry Penry uses a surveyor's level in May atop Odakota Mountain in the Black Hills National Forest.

Paul Horsted, foreground, holds a leveling rod while Jerry Penry takes a reading with a surveyor's level in May atop Odakota Mountain in the Black Hills National Forest.

Jerry Penry sets up a GPS receiver in May atop Odakota Mountain in the Black Hills National Forest.