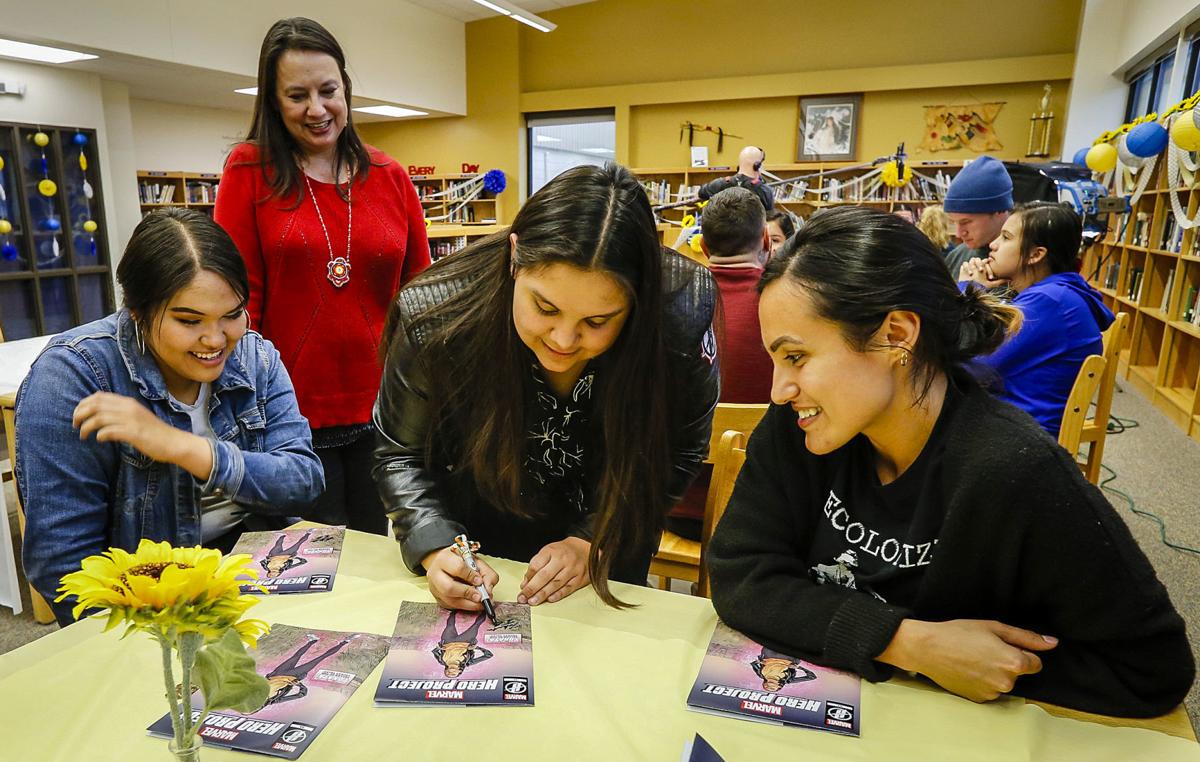 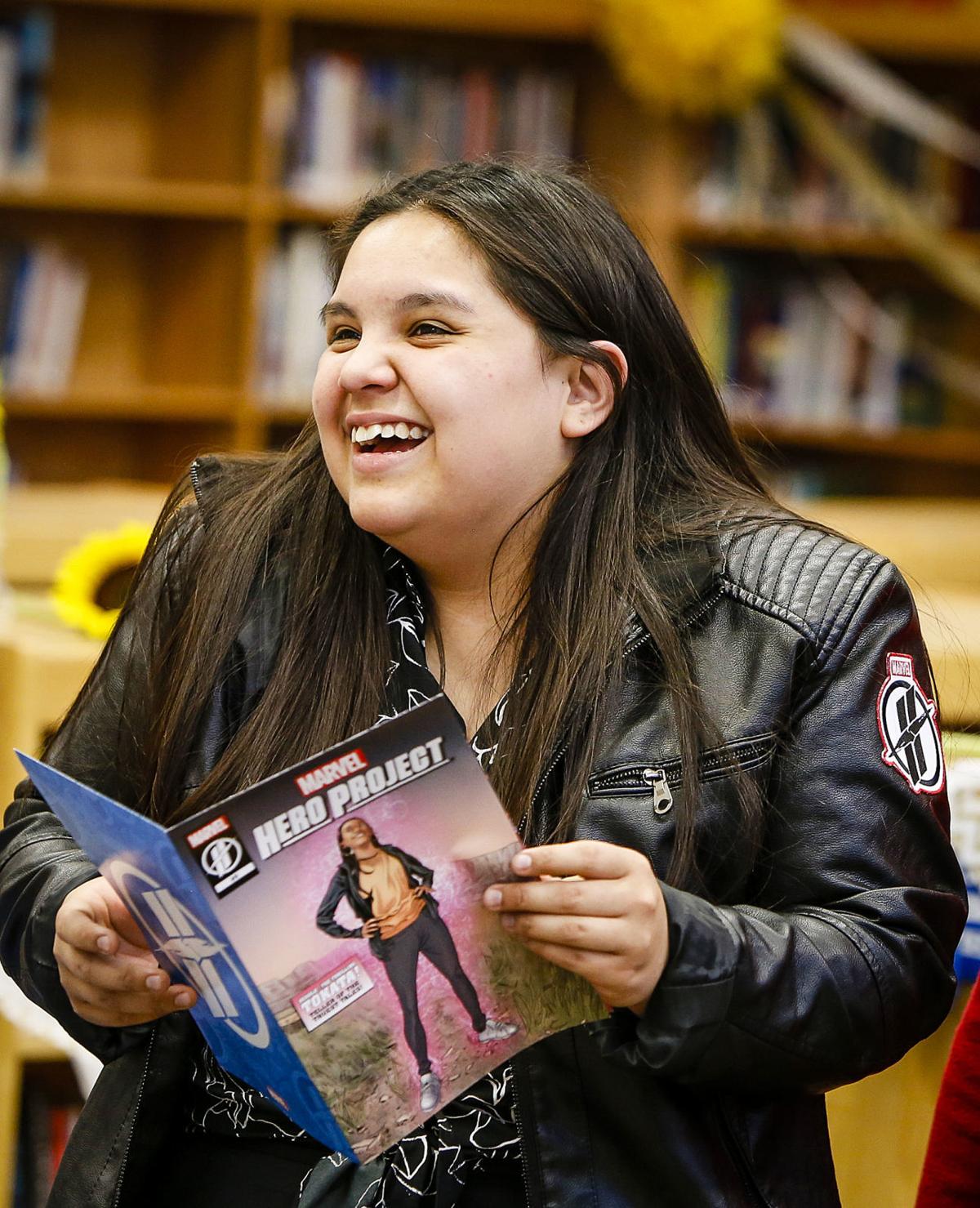 In December, Tokata Iron Eyes got to watch her episode of Marvel's Hero Project, and she got her first look at the Marvel comic book in which she is the superhero. 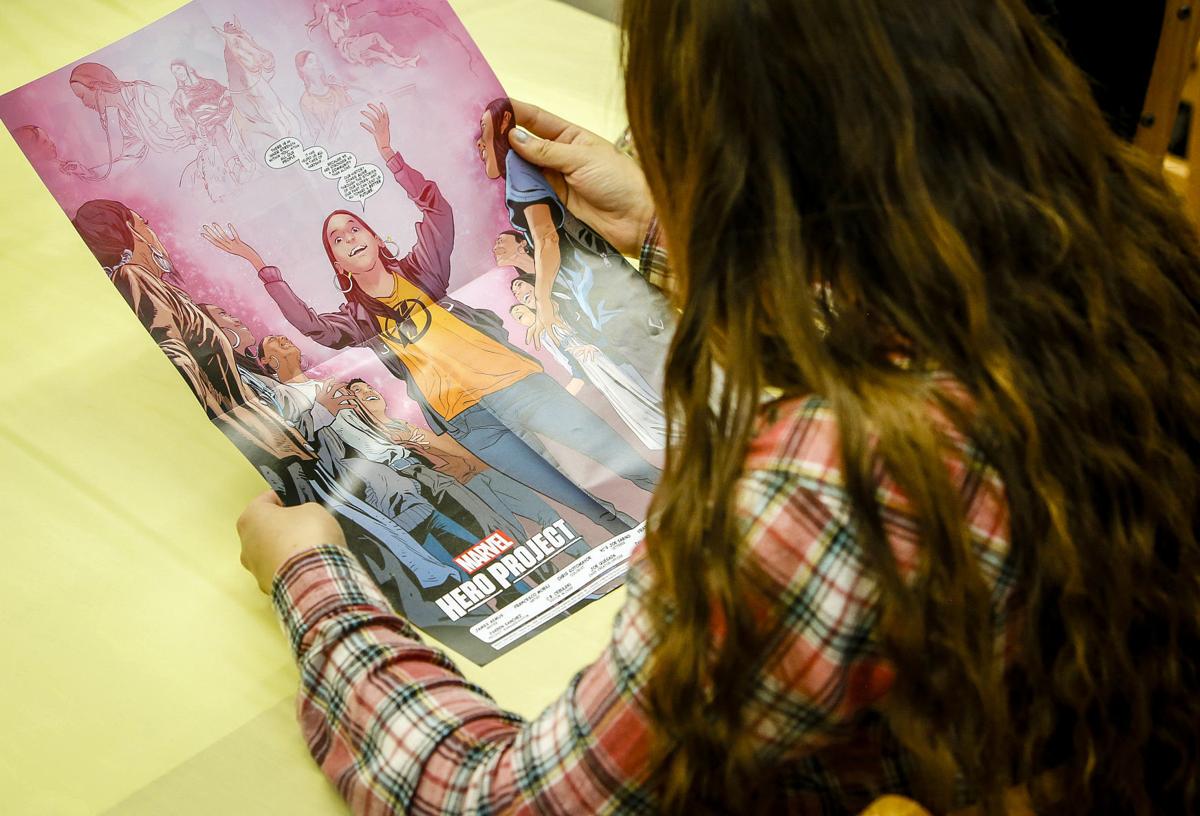 In December, Tokata Iron Eyes and her family got to preview Tokata's Marvel superhero comic book and the episode of Marvel's Hero Project that features Tokata. Tokata described the entire experience as a profound honor. "Listening to children who are coming from diverse backgrounds and letting them know their voice and their story matters is what’s going to rewrite our own narrative," Tokata said.

Marvel’s Hero Project is out to prove that superheroes live among us. One of those superheroes is activist, public speaker and high school student Tokata Iron Eyes of Pine Ridge.

Tokata, 16, will be featured in an episode of Marvel’s Hero Project streaming Friday. Her superhero moniker is “Thrilling Tokata.” The show is available exclusively on Disney+. Marvel Entertainment, the powerhouse behind superhero movies and comics, launched this new non-scripted reality series to showcase ordinary kids accomplishing extraordinary things.

“It’s a very surreal thing. Disney is a huge media outlet and there’s not a lot of representation for indigenous communities anywhere. It’s such a profound honor,” Tokata said. “It shows progress in a special way. We deserve to be the heroes of our own stories again.”

Marvel’s Hero Project highlights 20 kids ages 11 to 16. Some are overcoming disabilities. Some, like Tokata, are activists. Some see problems around them and find creative solutions, such as growing an urban garden to feed the hungry. In every episode, Marvel surprises these young heroes who dedicated themselves to performing selfless acts of bravery, kindness and betterment by welcoming them into Marvel’s Hero Project.

Tokata is included in Marvel’s Hero Project to empower indigenous youth. Last fall, Tokata gained international attention when she invited Swedish climate activist Greta Thunberg to western South Dakota. The teens appeared together at a climate rally and march in Rapid City, at Standing Rock High School in North Dakota and on the Pine Ridge Reservation, speaking about climate change and the proposed Keystone XL pipeline.

Tokata’s environmental activism began years earlier. Tokata was 12 when she spoke in a video, advocating for action in Standing Rock Sioux Nation’s battle against the proposed route of the Dakota Access oil pipeline. The video helped start the “Rezpect Our Water” social media campaign, which played a role in attracting thousands of national and international visitors to Standing Rock to fight the pipeline.

“For me, public speaking was an accessible way … to stand up for myself and our people and our rights,” Tokata said. “In general, I would consider myself a representative of indigenous youth. I feel like our perspective needs to be included in conversations. For a really long time, we didn’t have any say.

“I think the real message (of my episode) is really indigenous people and young people’s stories are so important and they need to be told. They are so instrumental to building a world everybody would want to live in,” she said.

Tokata continues to hold rallies, host letter-writing campaigns and make videos to raise awareness. Her goal is to inspire and empower other indigenous youths to be heard. Yet she’s also a junior at Red Cloud Indian School, and she’s thinking about college and tentatively planning a career in which she continues public speaking.

Filming for Tokata’s Marvel’s Hero Project started in January 2019. It continued for six months, mostly on the Pine Ridge Reservation, at Tokata’s home and school, in the community and at some of Tokata’s speaking engagements.

Each episode ends with a reveal, as Marvel surprises the kids with their very own comic book in which each kid is immortalized as a superhero. Tokata’s comic book will be available for free starting Jan. 17 in Marvel Unlimited and the Marvel Digital Comics Store. The online comic book has an audio description option for visually impaired users.

Tokata received physical copies of the comic book she can share with friends. Later, she was presented with a framed copy of her comic book cover, Hirsch said.

“Some of the best editors in Marvel are working on the show. With Tokata’s comic … we were really careful in creating a comic book using one of her favorite stories and incorporating that into her comic book,” Hirsch said. “She appreciated it and her family appreciated it.”

In December, Hirsch traveled to Pine Ridge to show the episode to Tokata and her family. Her father is Chase Iron Eyes, a Native American activist, attorney, politician and a member of the Oglala Sioux Tribe. Her mother, Dr. Sara Jumping Eagle, is an Oglala Lakota. She’s a pediatrician at Standing Rock, and an environmental activist.

“It was cool,” Hirsch said. “Her family appreciated it and thought it was done in the right way, and that to us as producers was the most meaningful thing of all. … I think she knows the episode could be a big deal for her community and that’s what it’s all about for her.”

“When we got to see the episode for the very first time, it was very beautiful in the way it merged these two worlds I’ve been living in of being a spokesperson and being a kid,” Tokata said. “It’s show a true portrait of who I am and what life looks like.”

Tokata believes her episode highlights the resiliency of indigenous people and the value of young people’s ideas.

“That trauma and those deep hurts weren’t very long ago. Those were our grandmas and great-grandparents. To recognize the strength of these communities is imperative,” Tokata said.

“One thing that should always be said … is we need to start listening to our children in all capacities. We’re at a stage in this world where we need everyone’s voices and stories listened to. We need to really start recognizing each other on a very human basis … if we’re going to create real change together,” Tokata said. “Being able to recognize the power children have in their dreams and the ability to care and be compassionate, those are skills the adult world is often lacking.”

I think we need to rethink the hanging of stuff on the Presidents downtown. Please donate your things to the Corner Stone Mission on Main Stre…

In December, Tokata Iron Eyes got to watch her episode of Marvel's Hero Project, and she got her first look at the Marvel comic book in which she is the superhero.

In December, Tokata Iron Eyes and her family got to preview Tokata's Marvel superhero comic book and the episode of Marvel's Hero Project that features Tokata. Tokata described the entire experience as a profound honor. "Listening to children who are coming from diverse backgrounds and letting them know their voice and their story matters is what’s going to rewrite our own narrative," Tokata said.