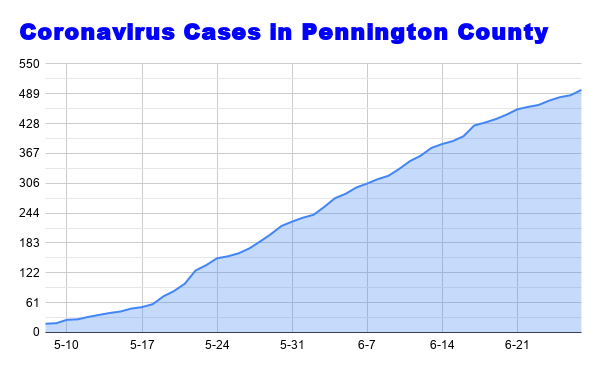 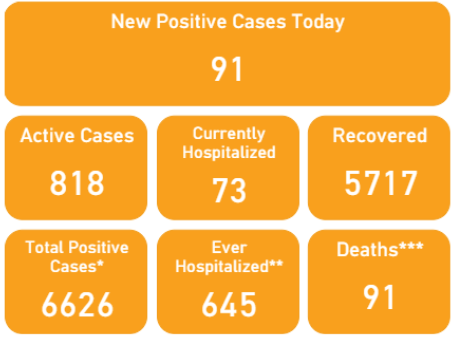 Three more coronavirus deaths were reported Saturday by the South Dakota Department of Health. Two of those who died were Pennington County residents. Five county residents have died this week. There have been 16 people die from Pennington County since the beginning of the pandemic. The other death Saturday was from Minnehaha County. Of the three deaths reported Saturday, two were women and one was a man. Two were in their 60s and one was in their 70s.

There were 91 new cases of coronavirus reported Saturday across South Dakota after 1,085 tests were completed Friday. That brings the state's total to 6,626 and the number of active cases rose by 23 to 818 across the state. With the three reported Saturday, the total number of deaths in South Dakota is now 91. There are 79 people hospitalized with CVID-19 illnesses and 36 of those are in the Monument Health system as of Friday's report.

Pennington County added 11 more new cases on 98 tests Saturday to bring the total of positive tests here to 497 with 135 cases still listed as active. Oglala-Lakota County reported the most new cases of any county in the state Saturday with 15 new cases on only 42 tests. That brings their number of active cases up to 42. Meade (nine tests), Lawrence (19 tests) and Custer (3 tests) counties each added one new case in Saturday's report.  Fall River County completed six negative tests Friday.

A Sturgis teenager was sentenced Friday to 55 years in prison after he fatally shot and hid the body of a Wyoming girl inside his closet last fall.

“None of us would have ever expected to work through a pandemic, let alone be the primary caregivers in a pandemic.”

The South Dakota Department of Health reported 55 new cases of coronavirus and two new deaths related to the disease Saturday morning. A total…