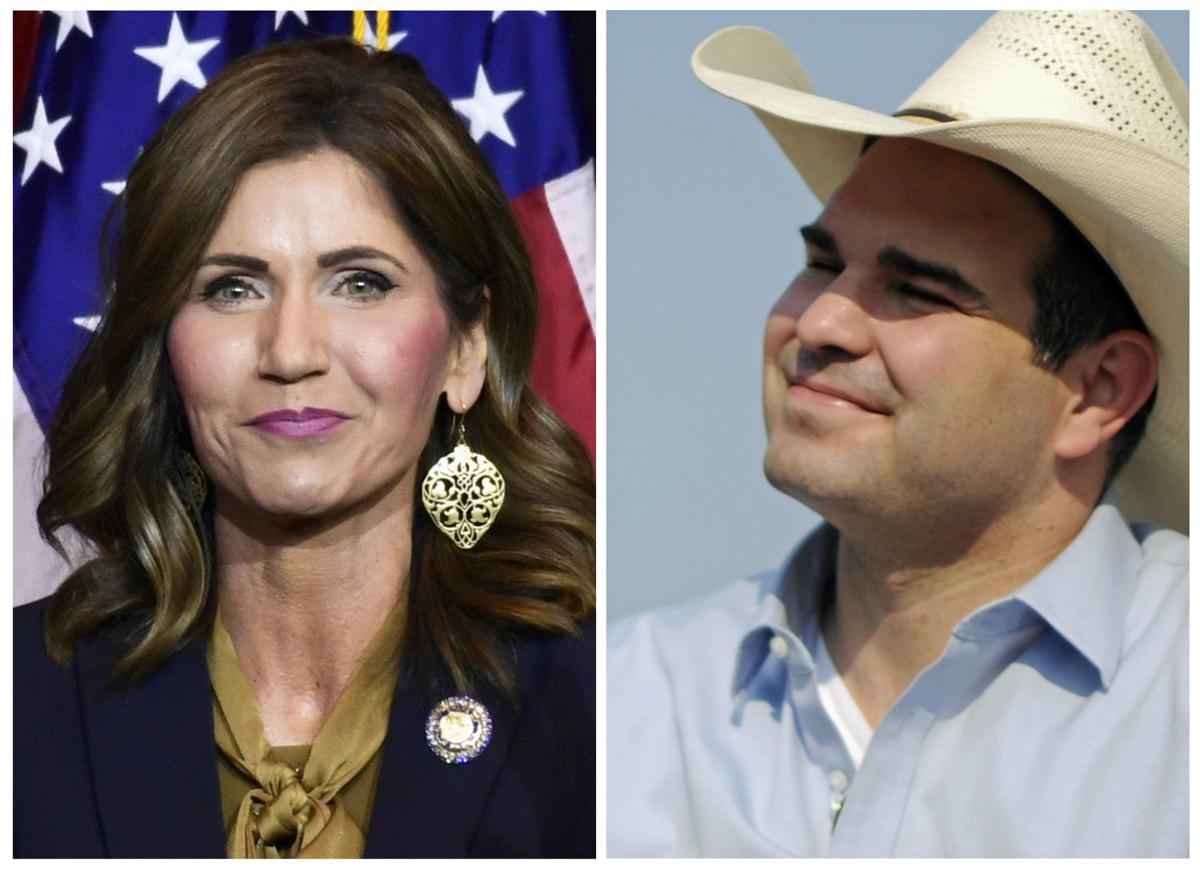 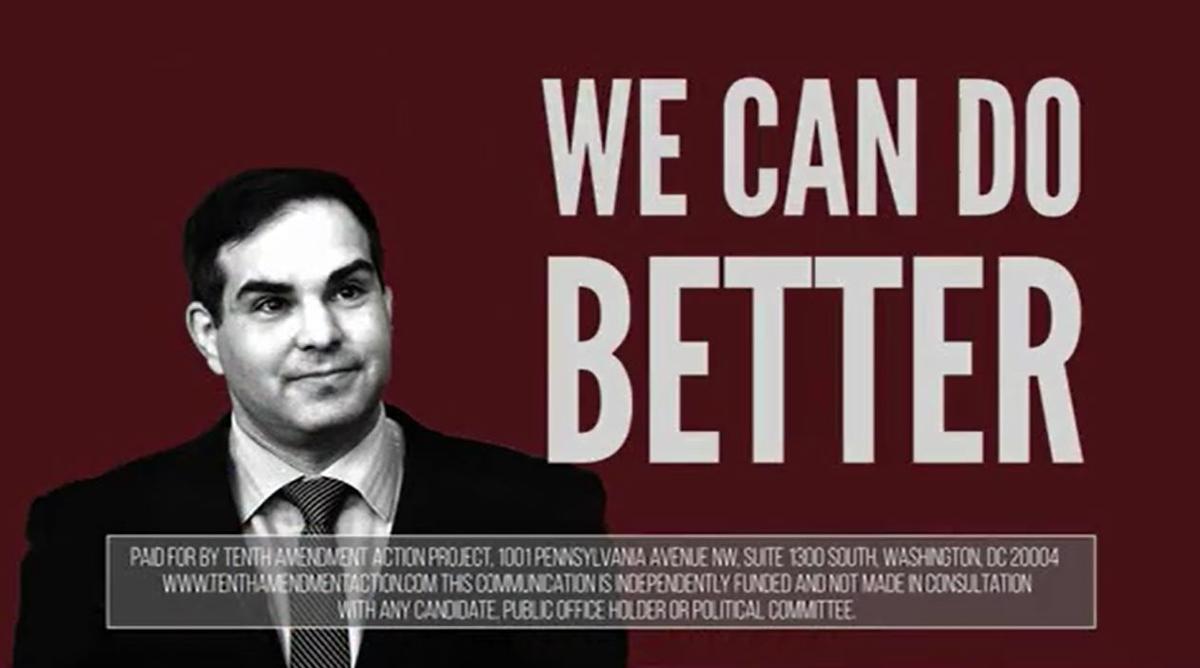 A screenshot from a television ad sponsored by the Tenth Amendment Action Project during the 2018 South Dakota governor race.

An out-of-state political action committee that ran advertisements supporting Kristi Noem and opposing Billie Sutton in the race for governor of South Dakota received $95,000 from undisclosed sources during the final week of the campaign.

The money was raised by a corporation — apparently a 501(c)4 nonprofit — that does not disclose its donors. The corporation then gave the money to a type of political action committee known as a super PAC, which appears to have spent most or all of the money on independent expenditures in the South Dakota governor race.

The contributions from the corporation to the super PAC — one for $75,000 on Oct. 31 and another for $20,000 on Election Day, Nov. 6 — occurred late enough in the campaign that they did not show up on the super PAC's campaign-finance reports until a post-election report, which was filed with the Federal Election Commission on Dec. 6.

Two campaign-finance experts interviewed by the Journal, Austin Graham and Brendan Fischer, of the nonpartisan and nonprofit Campaign Legal Center in Washington, D.C., said the situation undermined the transparency of campaign-finance disclosures but may have been lawful. Graham called it "a classic instance of dark money" and said similar tactics are increasingly in use across the country.

The Federal Election Commission was unavailable to comment on the situation, because its media relations office is closed during the partial shutdown of the federal government.

The corporation that raised the $95,000 is Tenth Amendment Project Inc., which filed its founding paperwork in March 2017 with the Virginia State Corporation Commission. The paperwork says nothing about the corporation’s purpose.

The corporation contributed the money to the similarly named Tenth Amendment Action Project, which is a super PAC with a Washington, D.C., address that filed its founding paperwork in February 2018 with the FEC.

James McKay, who said he is the president of the corporation and also runs the political consulting firm Norway Hill Associates, of New Hampshire, declined to disclose the source (or sources) of the $95,000. He said the corporation raises money from across the country.

“We file with the IRS and follow all the rules associated with that,” McKay said, “and so those donors are not public.”

McKay said the corporation is a 501(c)4 nonprofit, but the Journal was not able to independently verify the corporation's nonprofit status, because the corporation did not show up in the Tax Exempt Organization Search on the website of the Internal Revenue Service, and a spokesman for the IRS declined to comment on the legal status of individual organizations. Fischer, of the Campaign Legal Center, said it's possible the relatively new nonprofit has not yet had to submit a Form 990, which is a report that nonprofits must file annually with the IRS.

The purpose of Tenth Amendment Project Inc., McKay said, is to “support various projects at the state level to find solutions that aren’t based in the federal government.” The corporation's name refers to the U.S. Constitution’s Tenth Amendment, which says, “The powers not delegated to the United States by the Constitution, nor prohibited by it to the States, are reserved to the States respectively, or to the people.”

McKay said any assumption that the corporation was established to collect campaign contributions and hide the identities of the donors would be “totally wrong.” He said the corporation collects donations and decides how to spend the money.

Fischer, of the Campaign Legal Center, said the situation as described by McKay would be considered lawful. To be considered unlawful, Fischer said, there would have to be evidence that the donors gave money to the nonprofit corporation with an understanding that the money would be passed along to the super PAC.

McKay appears to work with a national law firm, Clark Hill PLC, to manage the corporation and the super PAC. The address of the firm's political law team in Washington, D.C., is listed on the paperwork for both entities. The super PAC's treasurer, Julie Dozier, whose email address is included in FEC filings, did not immediately reply to a message from the Journal.

As a super PAC, the Tenth Amendment Action Project can raise and spend unlimited amounts of money to independently support or oppose candidates, so long as there is no coordination with the candidates. Super PACs arose from controversial court rulings, including the U.S. Supreme Court's 2010 decision in the Citizens United case.

During the 2017-2018 election cycle, the Tenth Amendment Action Project super PAC raised a total of $281,000, according to campaign finance reports filed with the FEC.

The $95,000 from an undisclosed source or sources that was contributed by Tenth Amendment Project Inc. comprised about one-third of the super PAC's fundraising.

The other two-thirds of the money came from individuals and companies who are named in the super PAC’s campaign finance reports. The five biggest contributions were $50,000 from Eldon Roth, of Dakota Dunes, who is president of BPI Technology and founder of Beef Products Inc.; $25,000 from the Sioux Falls-based biofuels company Poet LLC; $25,000 from the Rapid City, Pierre & Eastern Railroad; $25,000 from Grant Verstandig, of Arlington, Va., who is CEO of Rally Health Inc.; and $25,000 from Wilson Trailer Co., of Sioux City, Iowa.

Some of the other contributions came from people whose names are recognizable to many South Dakota voters, including $10,000 from venture capitalist and former South Dakota lieutenant governor Steve Kirby, of Sioux Falls; $5,000 from Premier Bankcard and First Premier Bank CEO Dana Dykhouse, of Sioux Falls; and $3,500 from Anheuser-Busch executive August A. Busch III, of St. Peters, Mo.

The super PAC spent a total of $275,597.72, according to its FEC reports. The money went to vendors, including media placement firms and consultants, who in turn conducted $272,772.42 of independent spending on behalf of the super PAC in the South Dakota governor race, according to reports of communication expenditures on file with the South Dakota Secretary of State's Office.

During the June Republican primary campaign for governor, which pitted Noem against Marty Jackley, the Tenth Amendment Action Project super PAC sponsored $89,057.25 worth of advertising and get-out-the-vote phone calls. The reports filed by the super PAC in South Dakota do not make it clear which candidate was supported or opposed by the spending.

During the general election, the super PAC sponsored $183,715.17 of communication expenditures in South Dakota. Half of that money was spent on media placements and get-out-the-vote phone calls to support Noem, and the other half was spent on the same kind of activity to oppose Sutton. The media placements included pro-Noem television ads, and anti-Sutton television ads that described him as a liberal and equated him with U.S. Sen. Bernie Sanders and former U.S. Secretary of State Hillary Clinton.

Noem, a Republican, won a 3-percentage point victory over Sutton, a Democrat, in the general election. The candidates' own campaign committees raised more than a combined $10 million during the 2017-2018 election cycle, according to a Journal analysis of campaign finance reports filed with the South Dakota Secretary of State's Office.

"The Kristi for Governor campaign did not coordinate with either organization and has no knowledge of their contributions beyond the information publicly available," the statement said.

An advertisement sponsored by the Tenth Amendment Action Project during South Dakota's 2018 race for governor.

An advertisement sponsored by the Tenth Amendment Action Project during South Dakota's 2018 race for governor.

SIOUX FALLS | The year in South Dakota featured a historic campaign for governor that saw voters elect the first woman for the job.

SIOUX FALLS | In the weeks since Billie Sutton came closer to the governor's office than any Democrat in decades, his campaign has been unusua…

A screenshot from a television ad sponsored by the Tenth Amendment Action Project during the 2018 South Dakota governor race.