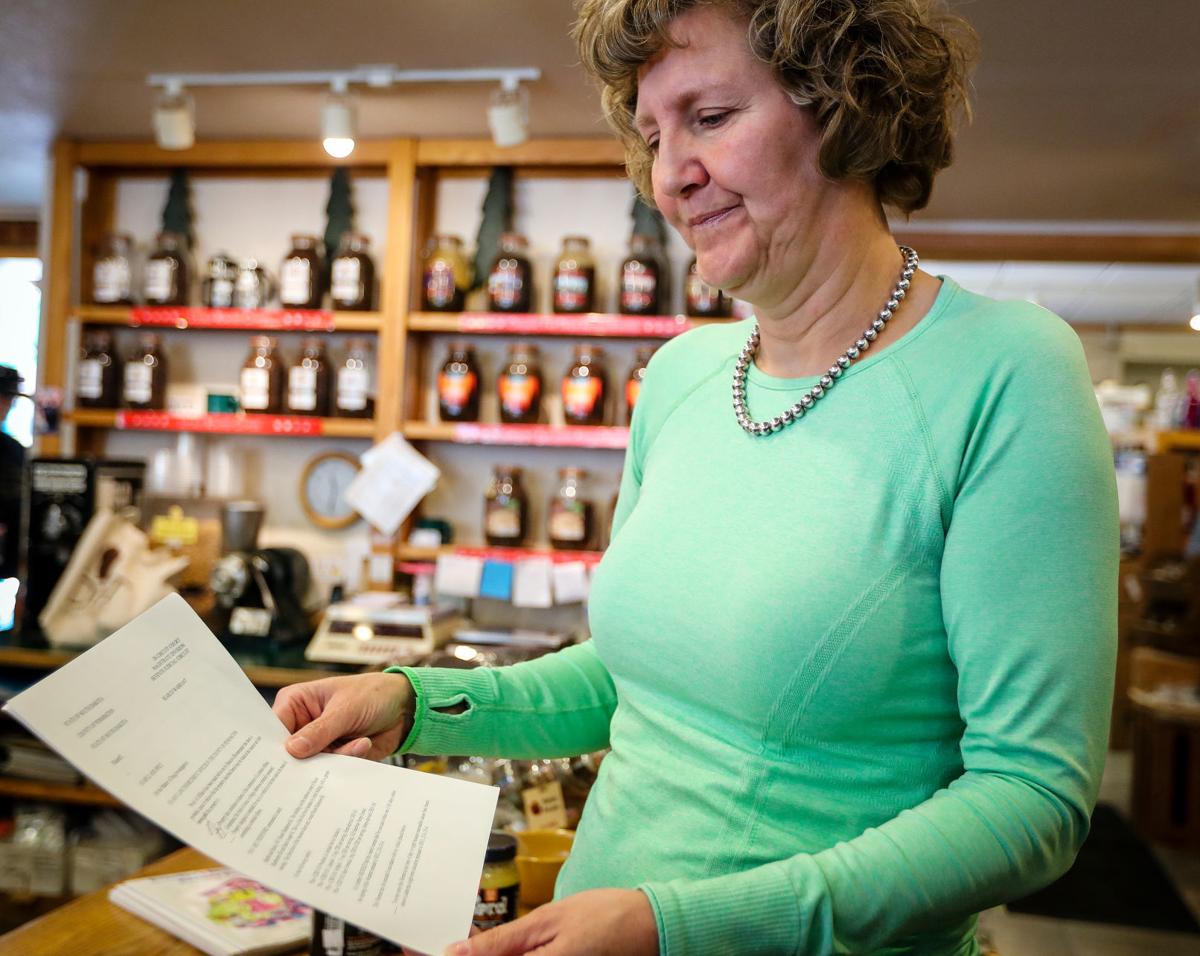 Carol Pugh holds the warrant she was given during a raid of CBD oil products from her Staple & Spice Market store in downtown Rapid City. Police said the products contained THC but no charges were filed. 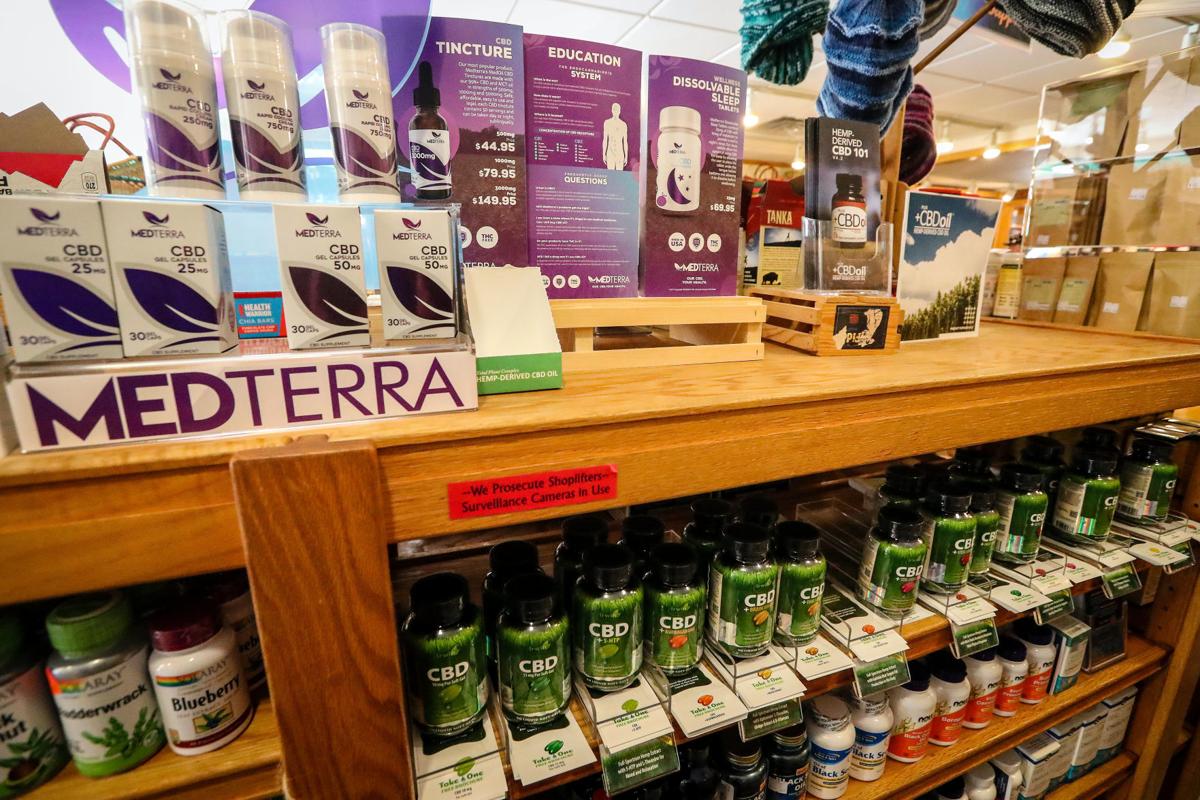 The shelf in Staple & Spice Market where Plus CBD Oil was displayed before Thursday's raid by the Rapid City Police Department and the Pennington County Sheriff's Office. 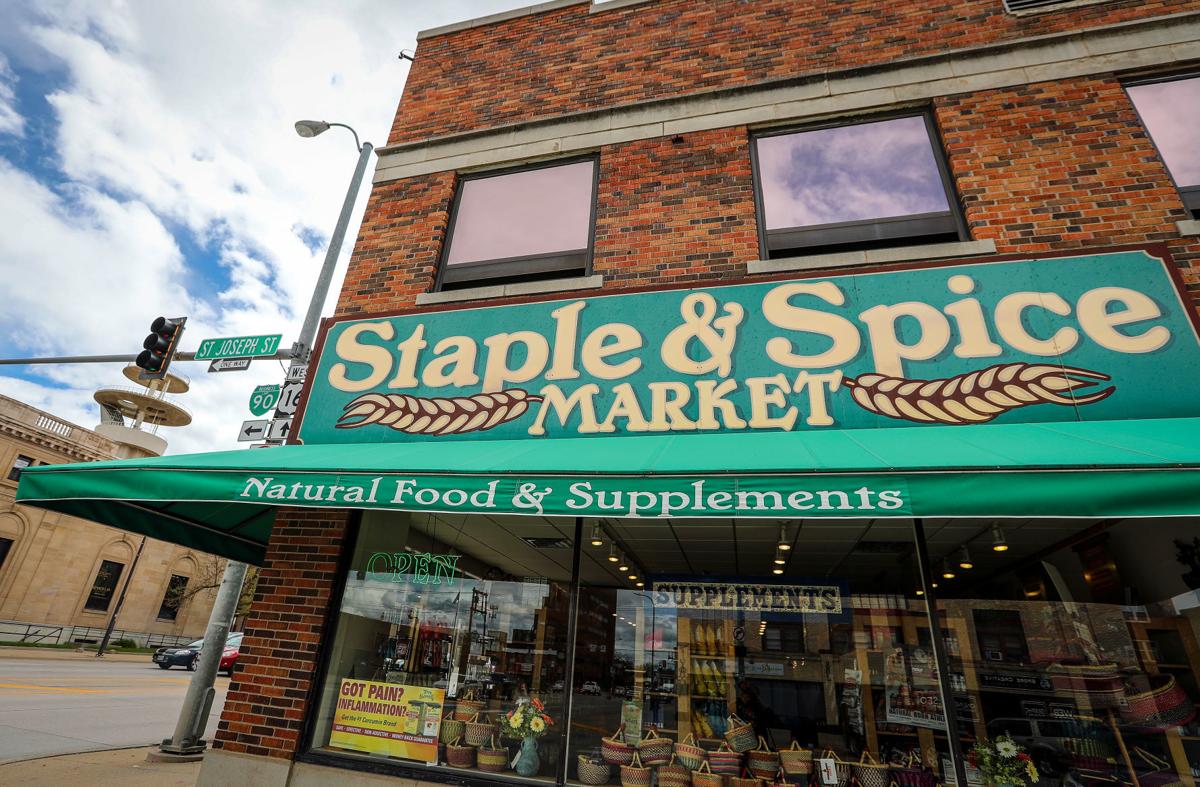 "Concerns were raised about the content of the products being sold," department spokesman Brendyn Medina told the Journal.

The products were taken Thursday afternoon from the Staple and Spice Market, a health-food store that has occupied the corner of St. Joseph Street and Mount Rushmore Road, in different iterations, since 1921, according to current owner Carol Pugh.

"I thought it was safe to sell," Pugh said at her store Friday morning. "I did what I thought was my due diligence as a retailer of 28 years."

"I think I'm getting the shaft here," she added.

The seizure comes after Pennington County State's Attorney Mark Vargo and Attorney General Jason Ravnsborg came to different conclusions on the legality of CBD oil. Ravnsborg has said he considers all hemp and CBD oil illegal. Vargo told the Journal in April that he won't prosecute hemp-derived CBD oil cases since it's not marijuana and not listed as illegal in South Dakota. Rapid City Police Chief Karl Jegeris and Pennington County Sheriff Kevin Thom said at the time they would follow Vargo's direction.

The CBD products were seized because they contain THC, the psychoactive chemical found in marijuana that is considered illegal by both prosecuting agencies, the police department said in a news release.

"We recognize confusion exists regarding CBD products," Jegeris was quoted as saying in a press release Friday morning. "However, we have the responsibility to take enforcement action regarding illegal drug distribution in our community, including products that contain THC."

The search was conducted by Rapid City police officers and deputies from the Pennington County Sheriff’s Office, Medina said. He said Jegeris was not available for an interview on Friday.

Vargo said late Friday afternoon that he has yet to see any documentation related to the search so he doesn't know if he will charge anyone with a crime. He said to prosecute, it must be proved that the products contain THC and that the person knowingly distributed products with the chemical.

"The bottom line is I believe CBD, in and of itself, is not illegal," Vargo said. But he said CBD with THC is "clearly illegal" since THC (Tetrahydrocannabinol) is listed under South Dakota Codified Law 34-20B-14.

Tim Bormann, spokesman for Ravnsborg, said the office's Division of Criminal Investigations wasn't involved with the investigation, search warrant or seizure, and the Attorney General's Office won't be prosecuting the case.

Pugh said Rapid City law enforcement officers came into her store to serve the warrant around 4:50 p.m. on Thursday. The warrant, signed by a magistrate judge with an illegible signature from the state court in Rapid City, says officers can search for various products made by Plus CBD Oil, a San Diego-based company that creates hemp-derived CBD products.

An inventory sheet shows that officers took 16 individual or bundled packages. The items were worth about $3,000 but will be reimbursed by the manufacturer, Pugh said.

She said that a Rapid City police officer told her that one of the agency's detectives previously purchased items from the store, tested them and found they are positive for THC. Pugh said the detective must have been undercover because her staff doesn't remember selling the products to a police officer.

The news release also said the products were tested at a forensic lab and "returned positive results for measurable amounts of THC content."

Pugh admits that the seized products have a "trace amount" of the chemical but her other CBD products — which were not seized — have no THC. She said the Plus CBD Oil bottles say they have a THC concentration of .03-percent, and the recently passed federal farm bill allows industrial hemp to contain up to .3 percent.

She said her 30 years in the Air Force taught her that "if there's a gray area, I'm going to stand for that." "The people want this product and I'm willing to put my reputation and my store's reputation on the line."

Debra White Plume, a 64-year-old Pine Ridge resident shopping for CBD oil Friday morning, said she uses the products for her arthritis, fibromyalgia and other conditions.

It's "real sad that a medicine from a plant that's supposed to help people is locked in jail," she said, adding that she knows many people who have been helped by CBD and THC.

White Plume also said she thinks there is a "better way" for law enforcement to spend their time.

Pugh says she there are about 10 businesses in Rapid City that sell products from Plus CBD Oil and they hope there will soon be more clarity on issues related to CBD.

"We don't know what the true rules are or what you are going to be held accountable for," she said.

Pugh also said she feels the seizure goes against the Republican value of freedom. "I'm not sure that's where we're going with this."

It's been one month since law enforcement raided a local health food store and seized hemp-derived CBD oil that they said contains THC, but no…

Carol Pugh holds the warrant she was given during a raid of CBD oil products from her Staple & Spice Market store in downtown Rapid City. Police said the products contained THC but no charges were filed.

The shelf in Staple & Spice Market where Plus CBD Oil was displayed before Thursday's raid by the Rapid City Police Department and the Pennington County Sheriff's Office.