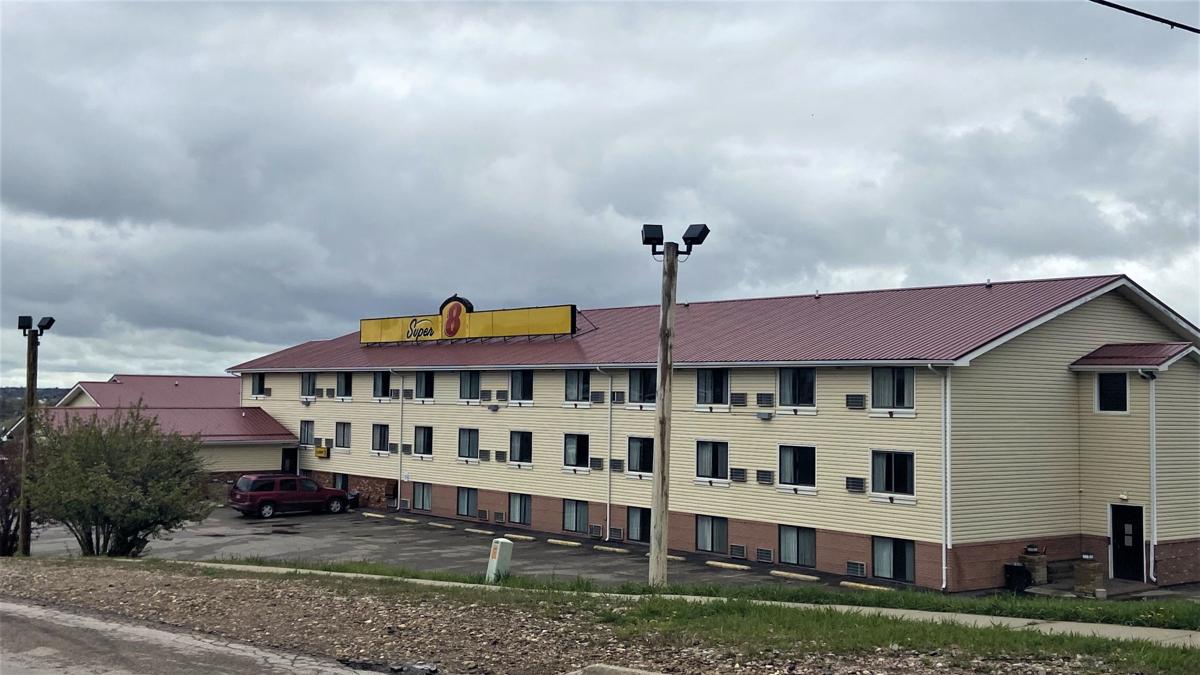 The Super 8 Rushmore Road hotel, located at 2520 Tower Road in Rapid City, was closed Friday and a sign posted on the door says the hotel will be closed for several days due to COVID-19 exposure. 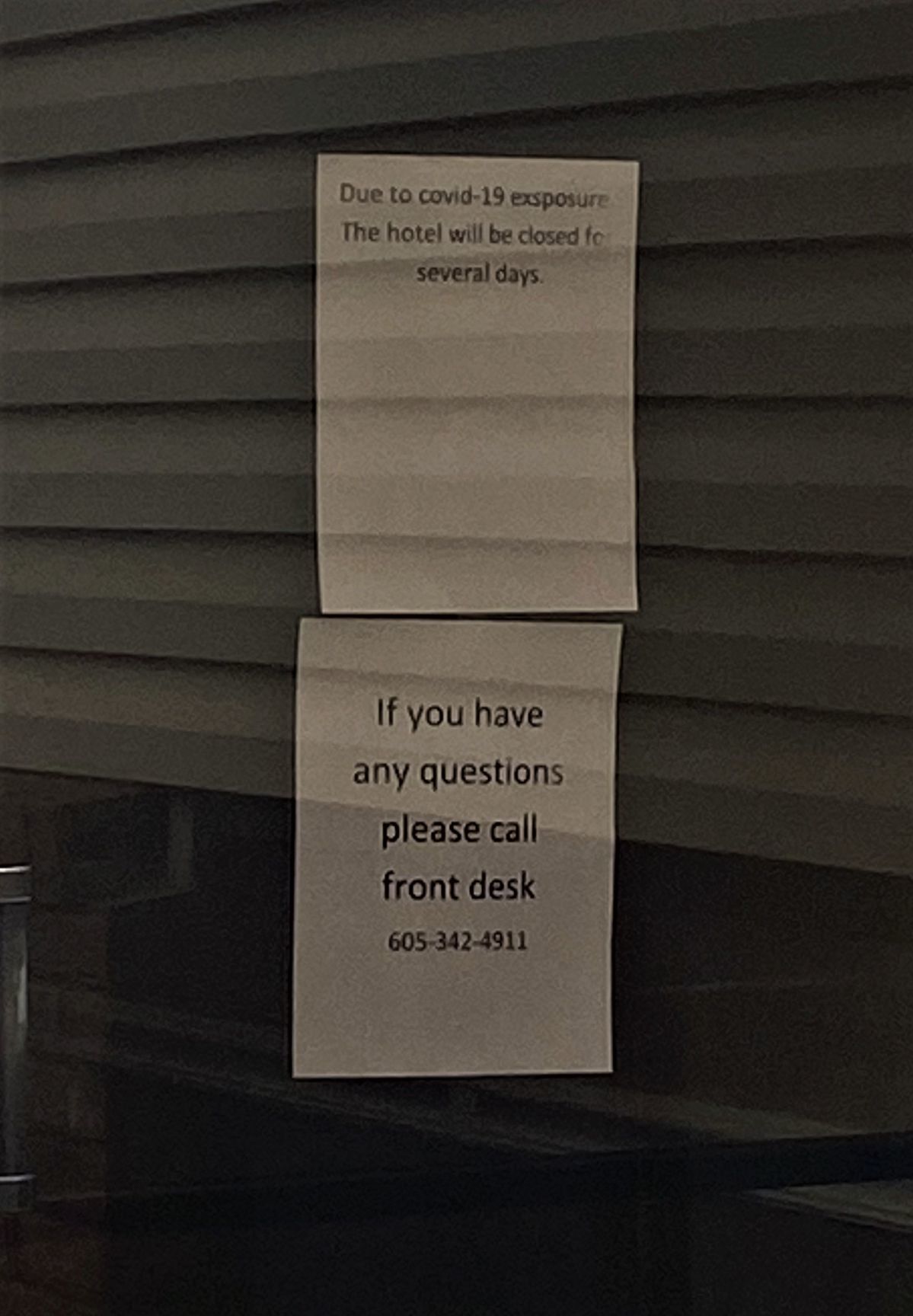 A sign on the door of the Super 8 Rushmore Road hotel at 2520 Tower Road in Rapid City.

The Super 8 Rushmore Road hotel is closed after an employee who became ill last week is suspected of dying from complications related to the coronavirus.

Tej Sakaria, managing partner of the Super 8 at 2520 Tower Road in Rapid City, said Friday the hotel was closed Tuesday after an employee's daughter reported that her father had tested positive for the coronavirus and it was likely the cause of his death on May 9.

The name of the employee has not been released.

Sakaria said the man last worked at the hotel on May 5 and was sent home because he was not feeling well.

"At that time with everything going on right now, we told him to go home and not come to work anymore until he gets better. We didn't know if it was a cold or anything like that, so we didn't have much knowledge about what was happening," Sakaria said. "On Saturday, I get a call from my other employees who said the staff member's daughter called and said he died Saturday."

Sakaria said the hotel did not know what the cause of death was until the man's daughter called Tuesday and said he tested positive for COVID-19.

Sakaria said he immediately contacted the Department of Health to receive guidance and then closed the hotel so that staff members could self-quarantine and get tested for the virus.

"At that time when I found out, I needed to make a quick decision as to what to do. So, I called the state Health Department and mentioned what happened," he said. "They told me a case worker would call me back and give me an idea if they were worried about community spread."

Sakaria said Friday he has not yet received a call back from the state.

"It's frustrating because it is such a unique situation we're going through right now, and we're having a hard time figuring out what the right thing to do to help protect all of our patrons who come to the hotel and my staff members," he said. "It would be nice to have contact to help give us an idea of what further precautions we need to take."

The Department of Health responded to an inquiry by the Journal by saying "we are investigating the case and don’t have information that a public notice is necessary at this time."

Sakaria said he took immediate action after he was told the employee had tested positive for the coronavirus.

"As soon as I found out, within a few hours, I had all the guests check out and all staff members locked up and closed," he said. "I just didn't want to risk anyone else if there was any exposure. I had them all self-quarantine, especially my staff members since they are all very important to me."

Sakaria said he referred his employees to Monument Health to get tested but is not sure how that went.

"We called and the nurses out there said 'You can try the test now, but if they aren't showing any symptoms, it might not show up,'" he said.

Monument Health spokesman Dan Daly declined to comment when contacted by the Journal.

Sakaria said he has remained in contact with his employees since he sent them home.

"So far, everyone is reporting they are OK and feeling well, not showing any symptoms, which I am happy to hear. My heart goes out to the family of the staff member who died. It is really a sad situation," he said.

The Super 8 hotel in Rapid City is an independently-owned franchise of Wyndham Hotels & Resorts. Gabriella Chiera, director of global communications for Wyndham, sent a statement to the Journal Friday expressing condolences to the employee's family.

"The health and safety of team members and guests is always our priority, and even more so now as the world navigates this evolving pandemic," Chiera said. "While this hotel is an independently owned and operated franchise, we’ve been in touch with the hotel’s owner to help support the team through this situation. Out of an abundance of caution, the hotel has proactively elected to close for two weeks. We understand that, during this time, the hotel will be conducting precautionary deep cleaning efforts and that the hotel’s team is preparing to reopen when it is safe to do so."

Sakaria said the deep cleaning should be completed over the weekend. He hopes to reopen next week.

"Since the last time he worked was on May 5, we are waiting at least 14 days to reopen. But I only want to do that if my staff members and the guests are safe. That's the most important thing," he said.

The Super 8 Rushmore Road hotel, located at 2520 Tower Road in Rapid City, was closed Friday and a sign posted on the door says the hotel will be closed for several days due to COVID-19 exposure.

A sign on the door of the Super 8 Rushmore Road hotel at 2520 Tower Road in Rapid City.