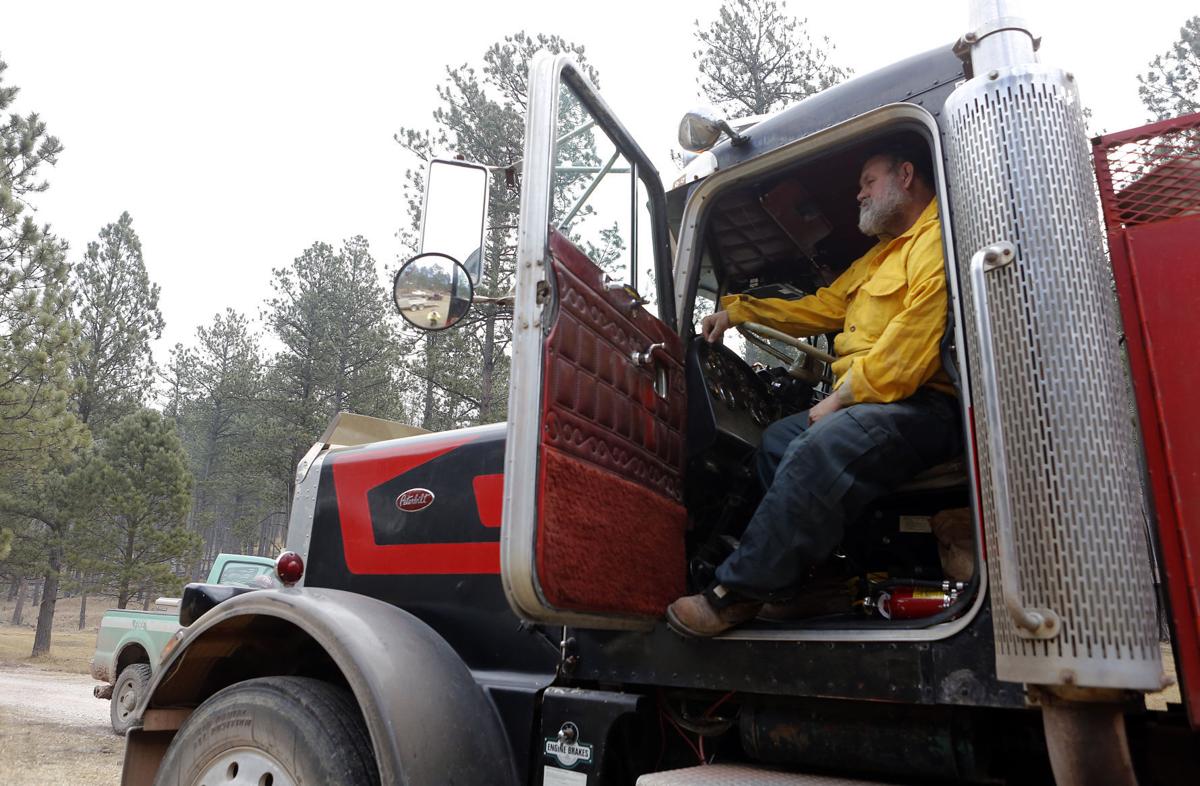 Pringle volunteer firefighter Robert Whitney works on providing water tender support Thursday morning on the Whitetail Fire near Custer. Whitney said he has been working as a volunteer firefighter for more than 30 years. South Dakota departments are finding it hard to attract young volunteers to bolster their ranks. 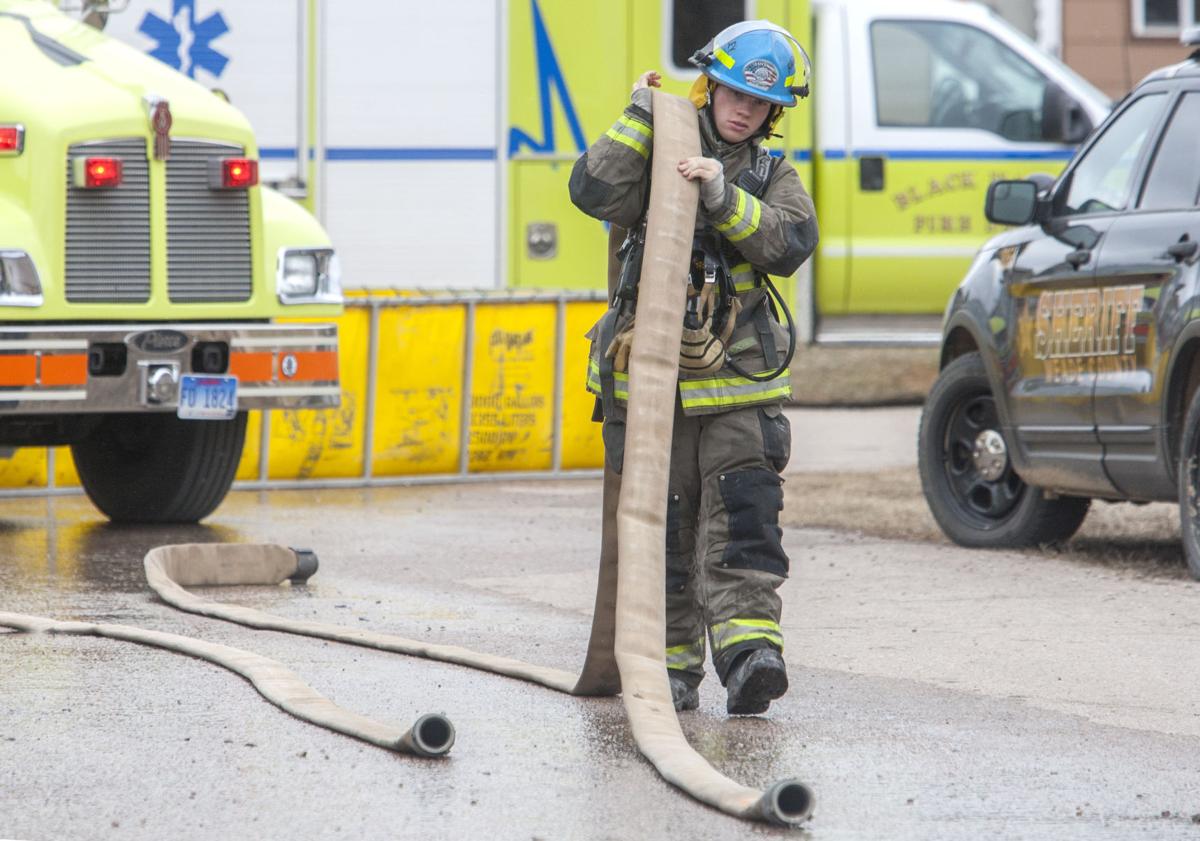 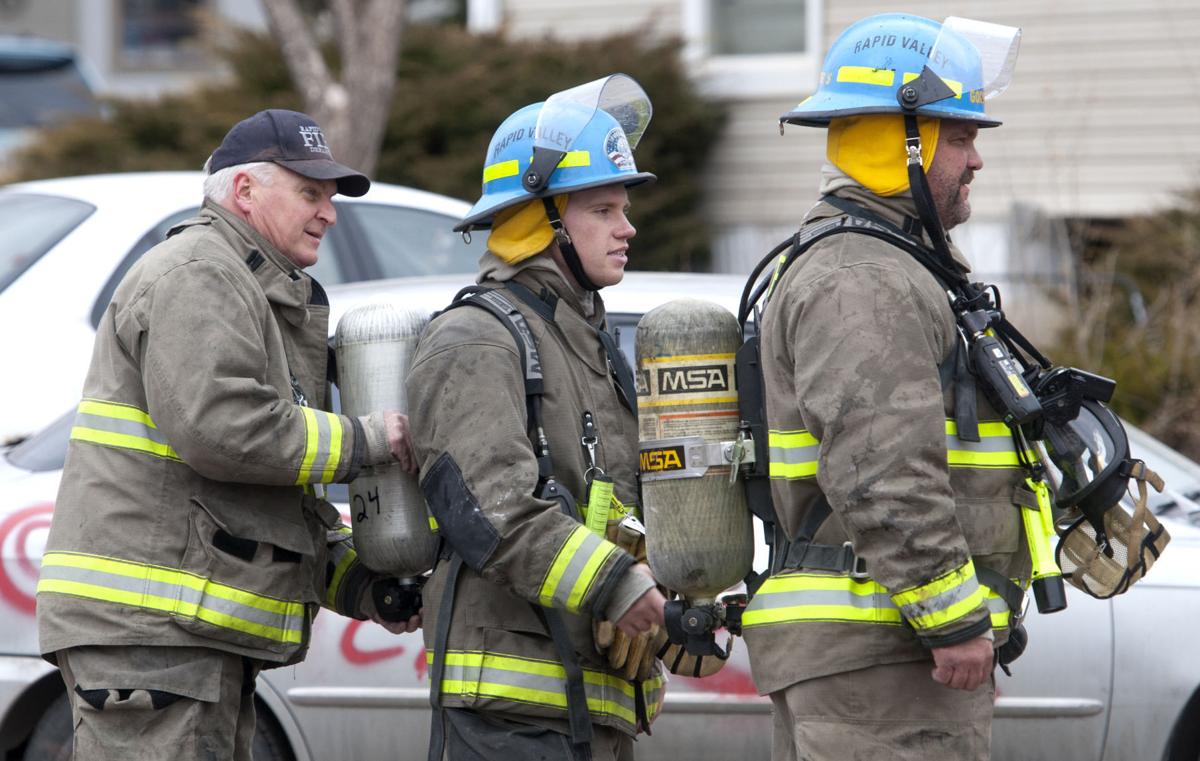 All across South Dakota, a state that relies heavily on volunteer fire departments to protect life and property, those departments are facing an increasing battle to attract and keep volunteers at a time when call volumes and the need for their services are increasing dramatically.

As fire department calls for both fires and medical emergencies continue to rise, the number of volunteer firefighters willing to respond has remained virtually stagnant. Meanwhile, the age of volunteers continues to rise in a state where only five of the 337 fire departments are not fully or partially staffed by volunteers.

Many volunteer fire departments — which comprise 70 percent of all departments across the country — are left wondering what the future holds.

According to a report from the National Volunteer Fire Council, the number of fire department calls has tripled over the past 30 years, from about 12 million in 1986 to nearly 34 million in 2015. Departments average one call every 24 seconds.

The NVFC report cites emergency medical calls as the main cause for the spike in calls. Local volunteer firefighters like Rockerville VFD Assistant Chief Gary Sortland and Rapid Valley VFD Chief Marshall Keefe say that trend is playing out in West River South Dakota as well.

“When we started the emergency medical service (about 15 years ago), that almost doubled our call volume,” Sortland said.

He added that the number of calls his 27-person department responds to tends to increase by about 10 to 15 each year. Rockerville’s service area comprises 60 square miles with a population that bulges from 2,000 people in the winter to almost 15,000 in the summer due to tourism.

Keefe estimated that about 70 percent of his agency's calls are for medical emergencies and not fires.

“If someone is having a heart attack or chest pain or breathing differently or in a car accident, that’s a big chunk of what we do.”

Keefe said his department serves between 12,000 and 15,000 people and responded to more than 500 calls last year with a team of 35 volunteers. Regarding the increased demand on his department, Keefe said, “it’s something we’re learning and will have to adapt to.”

Charlie Kludt is president of the South Dakota Firefighters Association and is both a career firefighter at Sioux Falls Regional Airport and a volunteer firefighter in the town of Viborg, 40 miles southwest of Sioux Falls. Dousing fires and saving lives since 1993, Kludt said stagnation in the number of emergency medical technicians and ambulance workers has coincided with volunteer fire department struggles, affecting both groups.

“Ambulance services are suffering the same way the fire departments are,” Kludt said. “I think there is a lot more of a demand for fire departments to be assisting on medical calls more than what there was in the past.”

Kludt, the son of a firefighter, said the challenges in recruiting new volunteers stem from the increased demands on people’s time, as well as the highly demanding nature of the job.

“Nowadays there just seems to be so many more things that seem to be family oriented activities that are taking up their time,” Kludt said, explaining that many communities in South Dakota are “bedroom communities,” meaning people are out of the area all day working and come home only to sleep at night. “They’re not home. It wouldn’t do me any good to volunteer when I’m not around.”

Keefe said many volunteers simply decide that they are too busy to help.

“One of easiest things for people to cut when they’re busy is their volunteer service,” he said.

The national report cites the increased calls, time demands and training requirements as the cause of decreased recruitment and retention, noting the aging and more transient nature of many communities as a contributing factor.

Then there’s the highly demanding nature of firefighting, and Kludt said many people simply don’t have “the proper desire or attitude to handle the demands of a fire department or medical service.”

In 2015, 47 volunteer firefighters died in the line of duty, with stress, overexertion and heart attacks as the biggest causes of death. Other health and safety risks include cancer and behavioral health problems such as post-traumatic stress disorder, depression and suicide.

As fewer young adults join local departments, the ranks of volunteers continue to age, especially in small communities. While communities with populations between 10,000 and 24,999 have 28.4 percent of their volunteers ages 30 years or younger, and 19 percent of their department 50 years or older, communities with populations under 2,500 see those numbers invert, with 22.9 percent 30 years old or younger and 31 percent 50 years or older.

“The population that is willing to volunteer, I believe, is getting older and older,” said Gail Schmidt, fire chief at Rockerville Volunteer Fire Department. Assistant chief Sortland said the age of the Rockerville crew is “in the 40-plus range.”

“We really can’t get too many of those 25-year-olds,” he said, citing the older population in their area. Schmidt said that could become a problem in the future as older volunteers aren't in as solid physical condition as they once were.

“The ability to do that physical aspect is less and less as we get older.”

In the past few years, some volunteer fire departments in South Dakota have been forced to discontinue service, Kludt said. In those cases, other area departments are notified and work together to absorb the service area. The cause is usually a lack of manpower, not money.

“They just didn’t have the people to handle the few calls they did have,” Kludt said.

Keefe, Schmidt and Sortland said they had never turned away a volunteer because of the start-up cost of training, which the NVFC estimates can cost up to $20,000 including equipment and training, and take three to four months to complete.

Volunteer fire departments are primarily funded by taxing citizens within the department’s service area, through budgeted funding from the city or county, or through fundraising efforts, Kludt said.

To keep costs in check, departments often work together to provide training to volunteers from across the region at the same time and location. They also work together to fight fires, often responding to wildfires or structure fires in tandem in what are known as mutual-aid calls. The NVFC estimates that volunteer fire departments save localities almost $140 billion per year.

The Rockerville VFD had the highest number of calls, 147, in 2016 since it began serving the community in the 1960s, Schmidt said. Expressing a bit of worry for the future, she was quick to point out that firefighting of the past, present and future will always be about teamwork.

“The brotherhood that exists in the fire service is amazing,” she said. “It’s just a big family, and it’s a great atmosphere.”

As the pressure continues to mount on fire departments to do more with the same or less, Schmidt said that brotherhood and inter-department coordination will be paramount.

That was highly apparent on Saturday morning when a fire at a home on Virginia Lane just north of Rapid City drew response from the North Haines VFD, Rapid City Fire Department Station 7, Rapid Valley VFD, Black Hawk VFD, Box Elder VFD, Piedmont VFD, and the Meade County Sheriff’s Office. No one was injured, but the home was a total loss.

“No one department can do it on their own,” Schmidt said.

Your Two Cents for April 17

Children fleeing violence, drug wars, and poverty caused by the U.S. addiction to drugs and money deserve our compassion. Where is our governo…

Pringle volunteer firefighter Robert Whitney works on providing water tender support Thursday morning on the Whitetail Fire near Custer. Whitney said he has been working as a volunteer firefighter for more than 30 years. South Dakota departments are finding it hard to attract young volunteers to bolster their ranks.