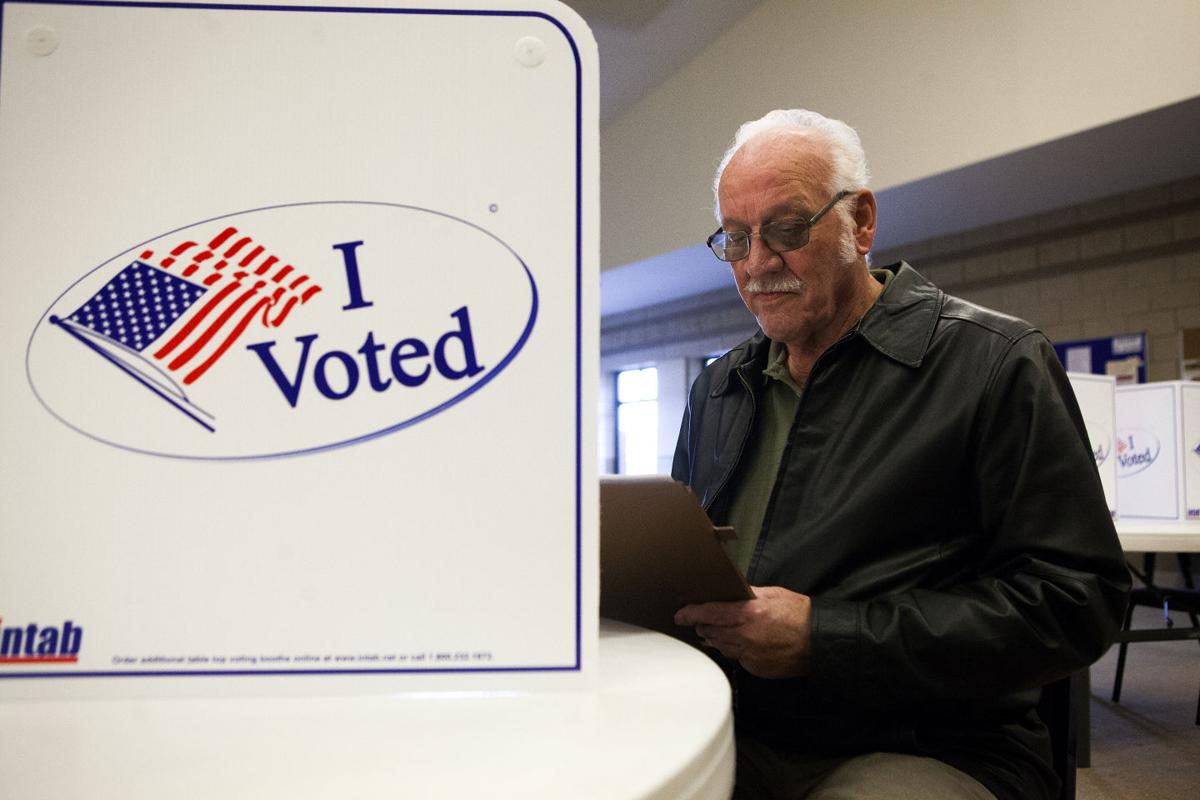 Clifford Harms fills out his ballot in the wheel tax election Tuesday afternoon at Calvary Lutheran Church. Pennington County voters soundly rejected the tax, which would have paid for road and bridge projects. 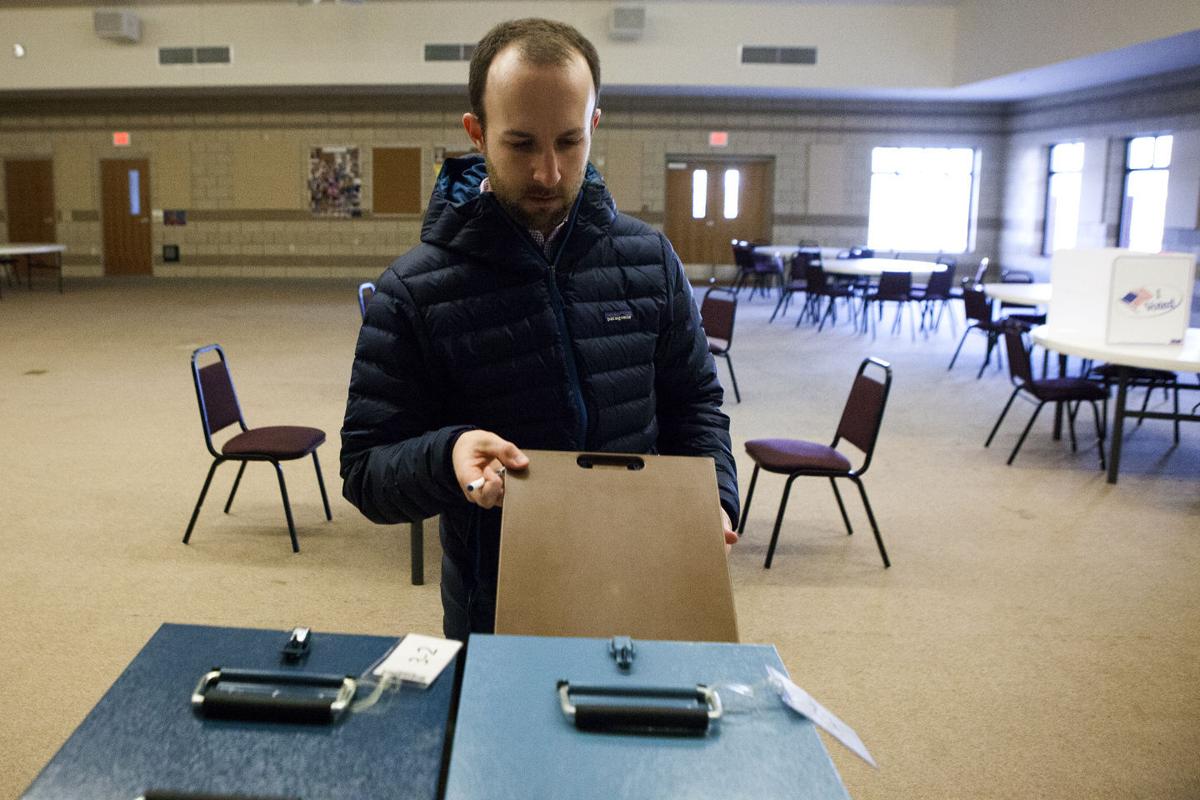 Casey Madson casts his ballot on the proposed wheel tax Tuesday afternoon at Calvary Lutheran Church. A turnout of just more than 15 percent of registered voters killed the tax.

Pennington County residents on Tuesday voted overwhelming to reject the wheel tax that would have raised an estimated $2.5 million annually to pay for highway and bridge projects.

According to the final count by the Pennington County Auditor's Office, 59.6 percent of voters rejected the wheel tax, while 40.4 percent voted in favor. Turnout was 15.3 percent of registered voters.

The result means residents will not have to pay a wheel tax that would have required either a $3, $4 or $5 tax per wheel, per vehicle, at the time of registration or renewal. The lightest vehicles would have paid the $3 tax, the heaviest the $5. The maximum tax per vehicle would have been $60.

Tonchi Weaver, who represents the group Citizens for Liberty that organized the effort to put the wheel tax on the ballot, was gratified saying, "People still care to have a voice in their own government, and that's how it should be."

Commissioner Lyndell Petersen who voted in favor of the wheel tax, was resigned to the outcome, saying, "The system was applied and gave us a result. Now the challenge for the Highway Department and commission is to set the best course for moving forward. "

The vote eliminates the county's chances of receiving funding from the state Bridge Improvement Grant program, known as BIG, and leaves the Highway Department budget with $2.2 million in cuts.

In its 2015 session, the South Dakota Legislature passed a series of increases in fuel taxes and other transportation-related fees. A portion of those increases goes into the BIG program. The Legislature also included a requirement that only counties with a wheel tax may apply for BIG grants.

Thus, without a wheel tax, Pennington County will lose out on a possible $1.3 million state grant for bridges. Estimates are the county will contribute about $1.6 million to the BIG pot, which will be allocated to other jurisdictions.

Proponents said the wheel tax would have produced a reliable source of highway money, ensuring that necessary repairs and road projects would be done. Further, the proponents said, it would allow the county to tap into the BIG pot.

Pennington County resident Larry Zenor last week said he was voting for the wheel tax, explaining, "I think it’s a fair tax. Wheels that do the damage should do the repair."

Opponents argued that another tax will add to the burden taxpayers already are shouldering. And, they added, the state should not be allowed to coerce a county into imposing a tax.

Sandra Hellwig, a Pennington County resident, said she planned to vote against the tax. “I don’t think they spend our tax money wisely," she said of county officials. "It seems like they spend too much on frills and not enough on the basic services you expect the government to provide.”

Commissioners will meet at 7:30 a.m. today to certify the results of the election.

Commissioners have a few options for repairing the Highway Department budget in the future.

The department first must adjust its 5-year plan for maintenance projects to account for the budget shortfall.

Filling the budget shortfall with these saved funds would wipe out the all of the department's reserves.

County commissioners who voted in favor of the wheel tax said they would consider raising property taxes or using stored CPI to increase highway funding in future budgets if the wheel tax failed.

Stored CPI is a reference to the portion of the allowable Consumer Price Index, or CPI, increase that counties do not impose. For example, if the CPI is up 1.5 percent in a year, and a county raises its property tax by only 1.3 percent, the amount equal to the remaining 0.2 percentage points can be carried forward for optional use in a future year. Pennington County has about $2 million worth of stored CPI.

According to Tom Wilsey, superintendent of the Highway Department, several scheduled bridge and road improvement projects would be postponed if the wheel tax failed.

Your Two Cents for April 29

Your Two Cents for April 30

I'm not sure why there has to be controversy about legalizing marijuana. It's harmless and the voters want it. Regulating it is just another m…

Clifford Harms fills out his ballot in the wheel tax election Tuesday afternoon at Calvary Lutheran Church. Pennington County voters soundly rejected the tax, which would have paid for road and bridge projects.

Casey Madson casts his ballot on the proposed wheel tax Tuesday afternoon at Calvary Lutheran Church. A turnout of just more than 15 percent of registered voters killed the tax.