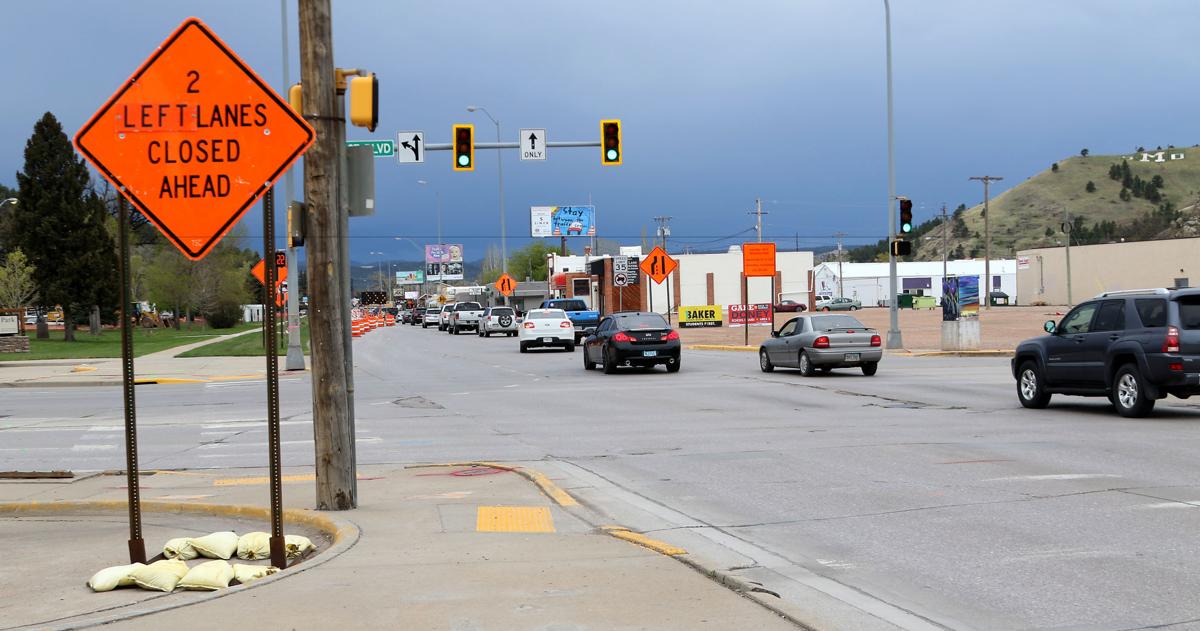 Construction projects on West Main and Omaha streets have caused traffic congestion for weeks. One of the projects could be completed by early next week.

The end is near for some west side Rapid City commuters who for weeks have had to endure daily gridlock due to simultaneous construction projects on West Main and Omaha streets.

Public Works Director Dale Tech said Wednesday that West Main, which has been reduced to one lane west of Mount Rushmore Road, should fully open early next week. The infrastructure project has led to traffic backups of several blocks from 4 to 6 p.m. on weekdays.

Work will continue throughout the summer on Omaha Street, which has been reduced to one lane from just west of Mount Rushmore Road to Deadwood Avenue. The Department of Transportation is doing the reconstruction of West Omaha Street. The city is doing the project on West Main Street.

Construction began on West Main and St. Joseph streets between West Boulevard and West Street around March 22 to install new waterlines and storm sewer as part of the multi-phase 12th Street Reconstruction Project. The work on St. Joseph Street, which is also reduced to one lane along Halley Park, is expected to last through the summer.

Tech said he understands the frustration of drivers, who in some cases have been stuck in traffic for as long as 45 minutes while traveling on West Main Street or inching down Omaha Street for blocks.

“There’s an old saying about when’s the best time to plant a tree? Well, it was 20 years ago and infrastructure is the same,” he said. “To wait, it might be inconvenient and it might cause some delays, but things don’t get any cheaper and these projects that we concurrently have going on, they’ve been identified for at least five years if not 10 years.

“We just urge patience,” he said. “There’s been talk about a zipper merge and different ways to handle traffic, and it really boils down to drivers just need to show respect to one another and kindness. If someone needs in your lane of traffic, just let them in and hopefully people will return the favor to you, too.”

Tech said the city coordinates projects with the Department of Transportation and meets annually with them and other communities to discuss the timing and location of construction projects.

Susan Sorbel, owner of Antique and Furniture Mart on West Main, said her business now sees half of what it saw before traffic was reduced to one lane.

"We're really looking forward to it being open, they've been working hard," she said.

Rapid City Police Department spokesperson Brendyn Medina said the police department adapted to the challenges posed by the construction projects that frustrated so many drivers.

“As you can imagine, our police officers get pretty good at knowing the most effective shortcuts through the city when responding to emergencies,” he said. “Additionally, our officers assigned to the western sectors are very much aware of the construction and work to maintain their presence on that side of town accordingly.”

Tessa Jaeger, Rapid City Fire Department public information officer, said the department has stations and apparatus strategically placed throughout the city and as a result response times have stayed the same during construction on West Main Street.

Tech said the city was planning on additional construction on St. Joseph Street this year but decided to move it to next year due to the reconstruction project.

Construction projects on West Main and Omaha streets have caused traffic congestion for weeks. One of the projects could be completed by early next week.