Steve Wozniak is a gadget guy.

On this day, he’s carrying “something like seven” electronic devices, including an HTC Android phone and, not surprisingly, an iPad from Apple, the company he co-founded in 1976.

“I almost always carry the latest. I like gadgets so much. I like people who develop new approaches to making our lives more simple,” he said. “I just like to be exposed to the world because it stimulates my mind — and I can afford it, too.”

The engineer and Silicon Valley icon known as “Woz” will share his enthusiasm for technology at 7:30 p.m. Monday, April 29, at the Rushmore Plaza Civic Center theater in “An Evening with Steve Wozniak.” The event, sponsored by the John T. Vucurevich Foundation, is sold out.

“I’m very, very proud of the company,” Wozniak said of Apple. “I like to use Apple stories for the ideas I get across. I’ll be speaking about our start, our culture and how we developed our reputation: really only building products that you are in awe of, where your mouth drops open and you say, ‘I’ve got to have that.’ It’s the art and beauty of something that helps you as a person.”

In a recent phone conversation, it was hard to keep up with Wozniak as he spoke enthusiastically — almost without a breath — about his passion for electronics, which started as a child.

“I look back now to science-fair projects and I say, ‘How could anyone that young have done those projects?’ Some had hundreds and hundreds of computer parts. It was a lot of the right learning in the right order to lead up to it. But I wanted it. I fell in love with electronics and computers and knew it was what I wanted to do.”

He became so good at tinkering and do-it-yourself that if he got a description of a computer, he could design it in a couple of days.

While at the University of California-Berkeley, Wozniak met Steve Jobs, then in high school. The two founded Apple Computer Inc. in 1976 with Ronald Wayne, first creating the Apple I computer out of a garage.

“We got along with absolutely no money. You just enjoy being with your friends, telling them what you came up with,” he said.

Wozniak developed the next model, Apple II, which included a central processing unit, keyboard, color graphics and a floppy-disk drive. The user-friendly model established Apple as a major player in microcomputing. By 1983, Apple had a stock value of $985 million.

“Even with Apple, all we talked about was making people’s lives better and making them masters of their own lives,” he said.

In their partnership, Wozniak was in charge of inventions and technology; Jobs, who died in October 2011, was responsible for the sales and marketing.

“For the first five years, basically I just designed things I loved for myself. Steve could find ways to turn them into money,” said Wozniak, who left full-time employment at Apple in 1987.

“I did not want to be a businessman. I didn’t want to run people’s lives. Steve wanted some bigness in the world and wanted to be the top-level decision-maker.”

Wozniak said Apple really took off when Jobs, who had been running his own separate firm, returned to Apple in 1996 and oversaw the release of the iPod, the iPhone and iTunes, attracting millions of loyal customers and reinvigorating the company.

“When he came back, he had the business maturity,” Wozniak said. “He’d always been the smartest person in the room, just not the most mature.”

A hot ticket for locals

Those kinds of insider tidbits are appealing to Apple "evangelists" like Fred Hadd, manager and co-owner of Computer Village in Rapid City. Hadd said he heard Wozniak speak about a year and a half ago. He and most of his staff will attend Monday's talk.

"We were so excited he was coming," Hadd said. "He gives a very interesting talk on the history of his relationship with Steve and Apple."

Wozniak said he enjoys speaking to groups about education, the early application of computers and entrepreneurship. He’s especially at home in front of engineering students.

“You can see it in their eyes. I always stick around so they can meet me, shake my hand and they can tell me what they’re working on,” he said. “Student audiences are very important. That was where I developed my inspiration and my ideas, and where I absolutely had that freedom in life.”

Wozniak's Rapid City speech sold out in less than a week, said Carmen R. Hansen, program officer and event coordinator for the Vucurevich Foundation, which has brought 21 speakers to the community since 1993. Hanson said Wozniak was chosen based on recommendations from speaker bureaus, and for his expertise in technology and the way we communicate.

And that may change in the next 10 years, Wozniak said. He thinks that mobile devices will become even more important, and more personal.

"I think mobile devices are going to be more like a friend that’s looking out for your needs, speaking to you, knowing your insides better than even you do,” he said. “I think computers are really going to have consciences and feelings. We don’t know how the brain is wired, how it’s done. But we’re going to stumble on it.

“Look how many people are walking around, texting on their cellphones. It’s another limb of themselves. This love for technology has never been higher.”

What Woz has done

Here are some of Steve Wozniak's accomplishments:

Wozniak (played by Josh Gad) is also featured in the now-delayed film “Jobs,” starring Ashton Kutcher as Steve Jobs. “I saw one clip and it turned me off,” Wozniak said. “Nothing in it is how things really happened.” He’s more enthusiastic about an Aaron Sorkin project that he was a consultant on. The film is just three three scenes shown in real time, set backstage at the release of three Apple products. It shows “Steve’s way of thinking compared to other people and his conflicts in the company. That movie, I’m just on edge for,” Wozniak said. 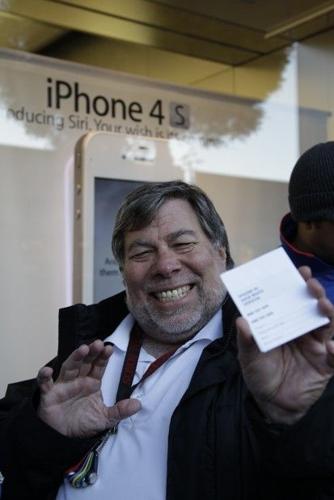 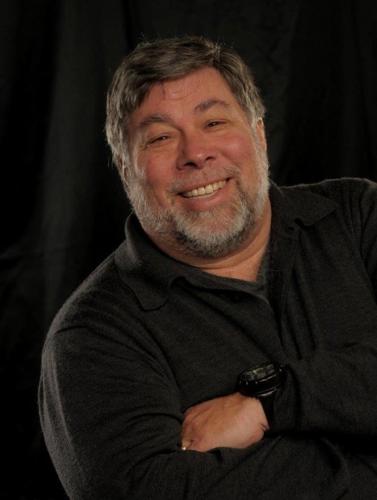 Steve Wozniak will speak about Apple, Steve Jobs, the way we communicate  and the future of technology at "An Evening with Steve Wozniak" Monday, April 29, at the Rushmore Plaza Civic Center theater. The event is sold out.