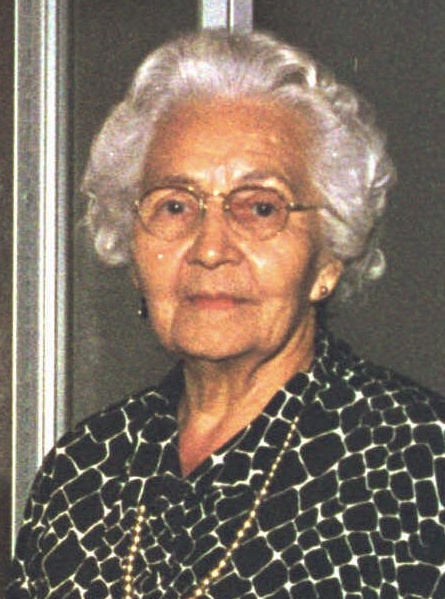 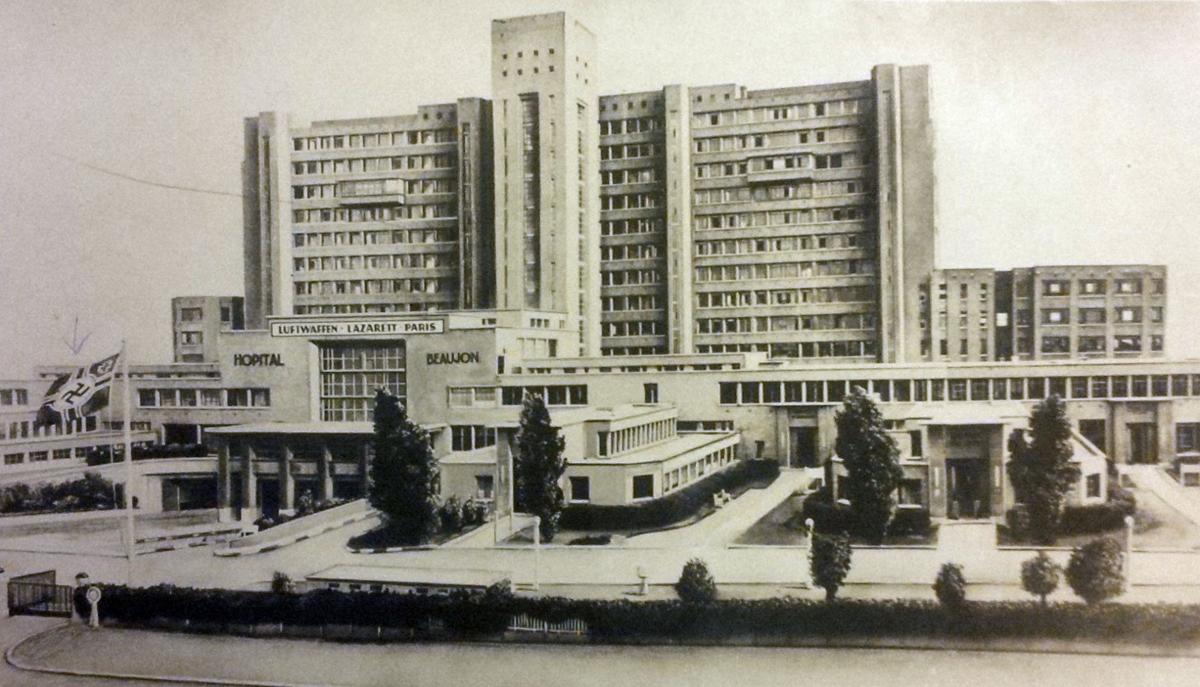 The 1,000-bed hospital in Leige, Belgium, where Lt. Marcella LeBeau was stationed for a year during World War II, shortly after her arrival. She said the first thing she noticed was the Nazi swastika still flying over the medical facility.

She was born in 1919, in her parents’ humble reservation home on the banks of the Moreau River in the long-gone village of Promise, now buried beneath the rippling waters of Oahe Reservoir.

And in her long life, veteran and nurse Marcella LeBeau showed great promise and perseverance, ministering to World War II wounded in the wake of D-Day and the Battle of the Bulge, mentoring several generations of Lakota, and nurturing lifelong friendships that have sustained her through time and troubles.

“The way I looked at it, we lived through a lot of historical trauma, inter-generational trauma, and educational trauma and I always considered myself a survivor,” the white-haired 96-year-old retired nurse said last week.

Survivor indeed. Today, on Veterans Day, a grateful nation has the opportunity to say "Thanks" to her and millions of others who risked their lives, or lost their lives, in combat and in support roles.

Then on Saturday, Wigmuke Waste Win or Pretty Rainbow Woman, LeBeau’s Lakota name, will tell her story at 9 a.m. at Ellsworth Air Force Base’s South Dakota Air and Space Museum. Her appearance is one in a series of events sponsored by the Black Hills Veterans Writing Group.

According to the founder of the group, which has documented the struggles and real-life stories of hundreds of Black Hills veterans, LeBeau’s journey has been one of surmounting profound challenges and witnessing remarkable scenes.

“Marcella LeBeau had many cultural currents flowing through her life that could have defeated her,” said Brad Morgan. “She was a young Lakota woman who decided to expand her horizons by going to college to become a nurse. She soon found herself an eyewitness to the devastation unfolding across Europe in 1944.

“That was fine with her because, above all else, her people were warriors,” Morgan added. “She ministered to the medicinal and emotional needs of young combatants far from the sheltering world they were familiar with back home. Even today, she remains active as a tribal elder and role model.”

Early life was not easy for young Marcella, whose great-grandfather, Joseph Four Bear, signed the Fort Laramie Treaty of 1868 “under duress.” Her mother died when she was just 10 years old, and Marcella and her siblings were sent to the Cheyenne Agency Boarding School, which she said was an abusive environment she disdained.

“We begged our father to get us out of the old agency school because we weren’t getting a good education there,” she said. She received her high school diploma from the St. Elizabeth Mission School in Wakpala, northwest of Mobridge, then attended St. Mary’s School of Nursing in Pierre, graduating in 1940.

Her first nursing job was at the Fort Thompson Hospital, where she and her friend, Marie Weaver, fell into an easy routine. But that all changed when a physician challenged them to leave South Dakota.

“This young doctor kept telling us, `You’re young and educated. Why don’t you go out and see the world?’” LeBeau recalled. “He’d tell us that every so often. So we decided we would take a job, and we found that at Pontiac General Hospital in Michigan. It paid $140 a month with room and board, which seemed like a lot back then.”

Settled into a new life in Michigan, and with the world at war, she said it became increasingly clear that the U.S. was going to be involved in the European conflict for the foreseeable future. So, just two decades after the U.S. had granted citizenship to Native Americans, the member of the Two Kettle Band of the Cheyenne River Sioux Tribe, joined by her best friend, enlisted in the Army Nurse Corps.

“On the radio every day, there was a call for nurses in the Army,” she remembered. “So my friend and I decided to volunteer for the Army Nursing Corps, and we signed up through the Red Cross. We thought we would serve together, but she went to Colorado and I went to California. She went to the Pacific, and I went to the Atlantic.”

As Allied troops prepared for the D-Day invasion in the spring of 1944, LeBeau found herself attached to a barracks-type field hospital in England. Once forces had landed at Normandy, France, on June 6, casualties soon began arriving in England.

She remembered being busy for days on end tending to patients on the surgical ward. For a brief respite from the duties, she attended one of bandleader Glenn Miller’s last concerts, staged in a cow pasture in the English countryside. It was one of 71 performances Miller and his band performed for troops in England over a five and a half month period.

Miller, who had led the most popular big band in the late 1930s and early ‘40s, producing such hits as “String of Pearls” and "Moonlight Serenade,” had joined the Army Air Force in 1942 at the age of 38.

“They had GIs dressed in skirts and they imitated the Andrews Sisters," LeBeau said. "That was really funny and so good. One of the songs they performed was `In the Mood.’ Just yesterday my granddaughter ordered that song online for me.”

Weeks later, Miller’s plane disappeared, LeBeau said. According to news accounts at the time, foggy, freezing weather should have grounded the flight on Dec. 15, 1944, but Miller was eager to entertain D-Day invasion forces then in Paris. He hitched a ride with a friend aboard a single-engine Noorduyn Norseman that left a Royal Air Force Field called Twinwood Farm and vanished over the English Channel.

Ten weeks after D-Day, Marcella boarded a Dutch ship and spent the next three days battling storms to cross the same channel, landing at Utah Beach.

“We had to climb down a rope ladder to a landing barge, which took us ashore,” she said. “We stayed in a cow pasture for a time, and there was a lady who put on a banquet for us. I remember she sang the French national anthem with tears streaming down her face.”

By truck transport, LeBeau went to Paris, which had just been liberated. They passed through towns reduced to rubble and worked at hospitals so recently liberated, the German swastika still flew over them. Finally, she and her compatriots arrived at Liege, Belgium, where she would spend the next year tending to the wounded in the wake of the Battle of the Bulge.

“I didn’t know what war was, which may have been my saving grace,” she said of her time at the 1,000-bed hospital. “But I was never afraid. We were so busy doing our work, there wasn’t time to be afraid. We were told to be packed and be ready to be evacuated on a moment’s notice.”

Marcella said her best memory of her service was the lifelong friendships she developed with her tentmates, Esther and Bette. Her worst memory revolved around a church service she wasn’t sure she’d survive.

“The chaplain had this service on Christmas day, and Esther and I went,” LeBeau said. “You could hear the buzz bombs overhead. Soldiers would cover their heads and lay on the ground. The minister just kept on praying. We couldn’t even hear him because of the noise from the buzz bombs and the ack-ack guns.”

As the war was winding down in 1945, she and Bette were sent on holiday to the French Riviera, a remarkable departure from their tent life, mess halls and endless hospital duties.

“It was wonderful,” she recalled with a sigh. “We spent a week there, just resting. It was beautiful, swimming pools, good food, everything was provided. It was certainly different than our regular day.”

In her 96th year of life, LeBeau said she looked back and retained great pride in her military service more than a half-century ago.

“It was a great honor and privilege to serve,” she said. “I have great respect for veterans. They are my heroes.”

Although she couldn’t recall a particular anecdote from her days overseas, her 56-year-old daughter, Gerri, said she and her seven siblings were raised on stories from World War II. Though she said their mother had never sought the limelight, the time she spent helping wounded soldiers heal and the 31 years she spent in nursing had made a difference.

“She’s a woman of compassion,” said Gerri LeBeau, a program coordinator for the Great Plains Tribal Chairmen's Health Board in Rapid City. “Consider the people she has impacted, not just her family members, but the people she has inspired. She inspired me to go into health care, to be a better person.

“She’s been a mentor to so many and she doesn’t even often realize it.”

One particular story had become a part of their family lore and would never be forgotten, she added.

“The story that always gets everybody is the one about Eugene Roubideaux,” Gerri LeBeau said. “While serving in Belgium, a fellow nurse approached my mom about a young man from South Dakota and wondered if she could go talk to him because he was depressed after both his legs had been amputated.

“She told us she would visit him every day. She even brought him newspapers from home,” Gerri said. “One day she went to visit him, and he was gone. He’d had been sent home. For years, she was never sure where he went.

“Years later, as a nursing supervisor in Eagle Butte, my mother was staging a workshop and met a young woman. A couple of days later the woman from Yankton called and told her she was Roubideaux’s daughter,” she said. “A few days after that, my mom called Eugene and asked him if he remembered the nurse who had stood by his bedside so many years before.

The 1,000-bed hospital in Leige, Belgium, where Lt. Marcella LeBeau was stationed for a year during World War II, shortly after her arrival. She said the first thing she noticed was the Nazi swastika still flying over the medical facility.