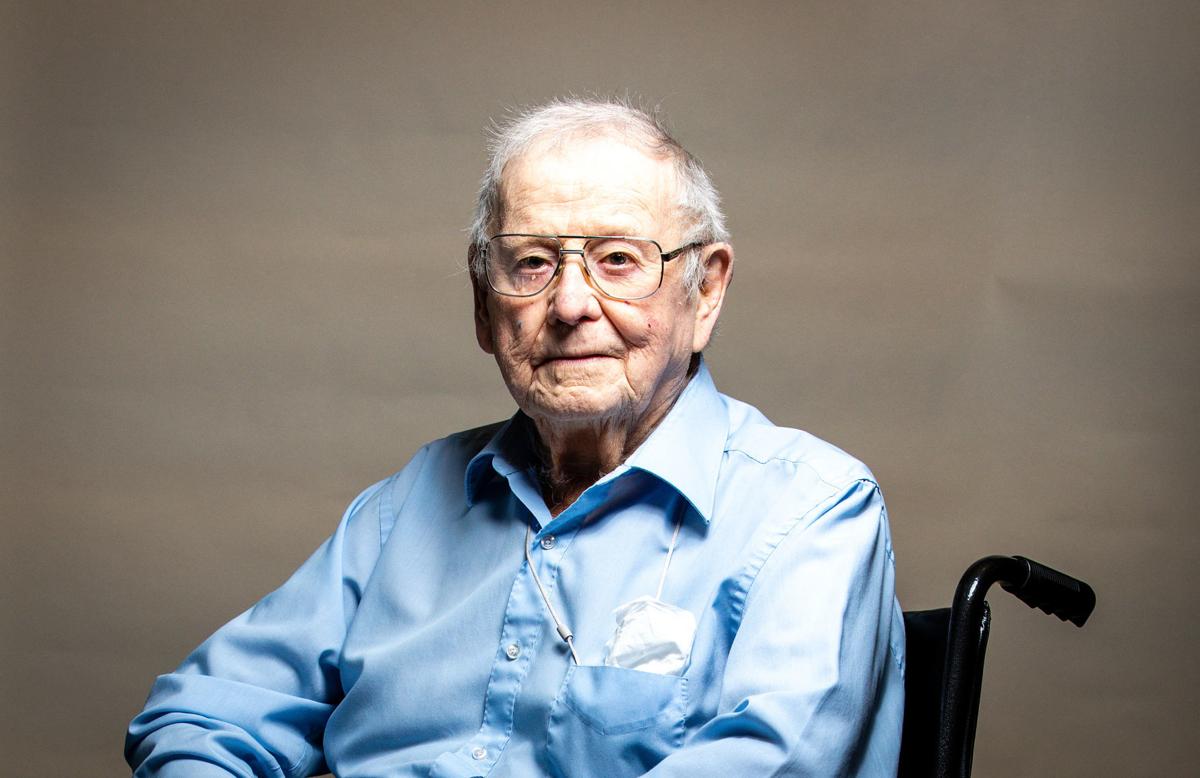 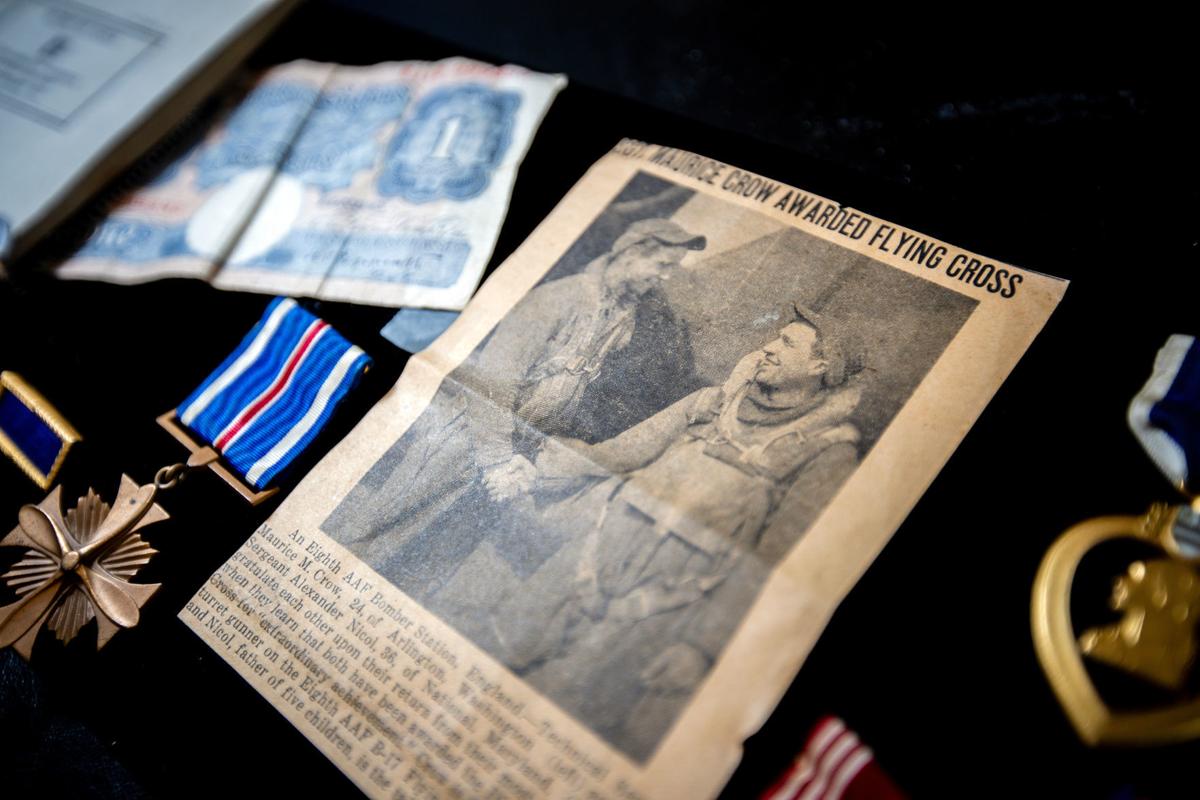 A newspaper article announcing the awarding of the Flying Cross to Morry Crow. 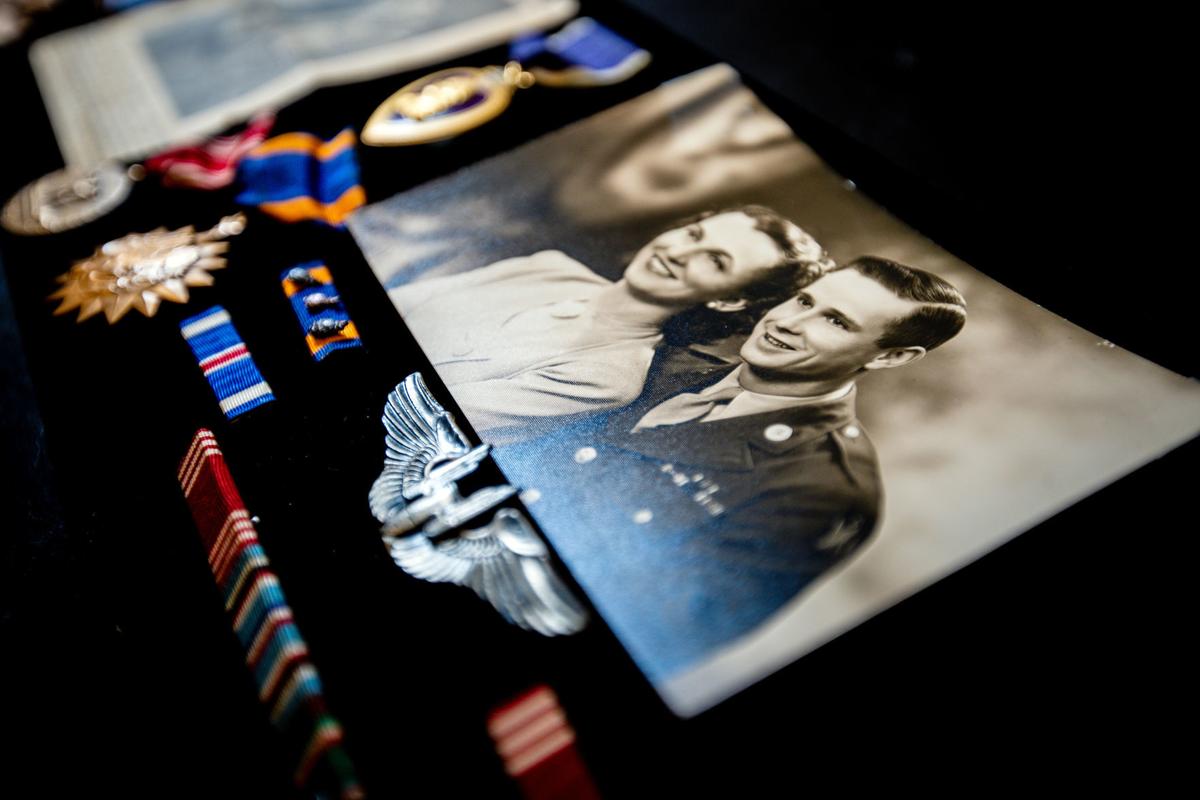 A photograph of Morry Crow with his wife, Lucille. 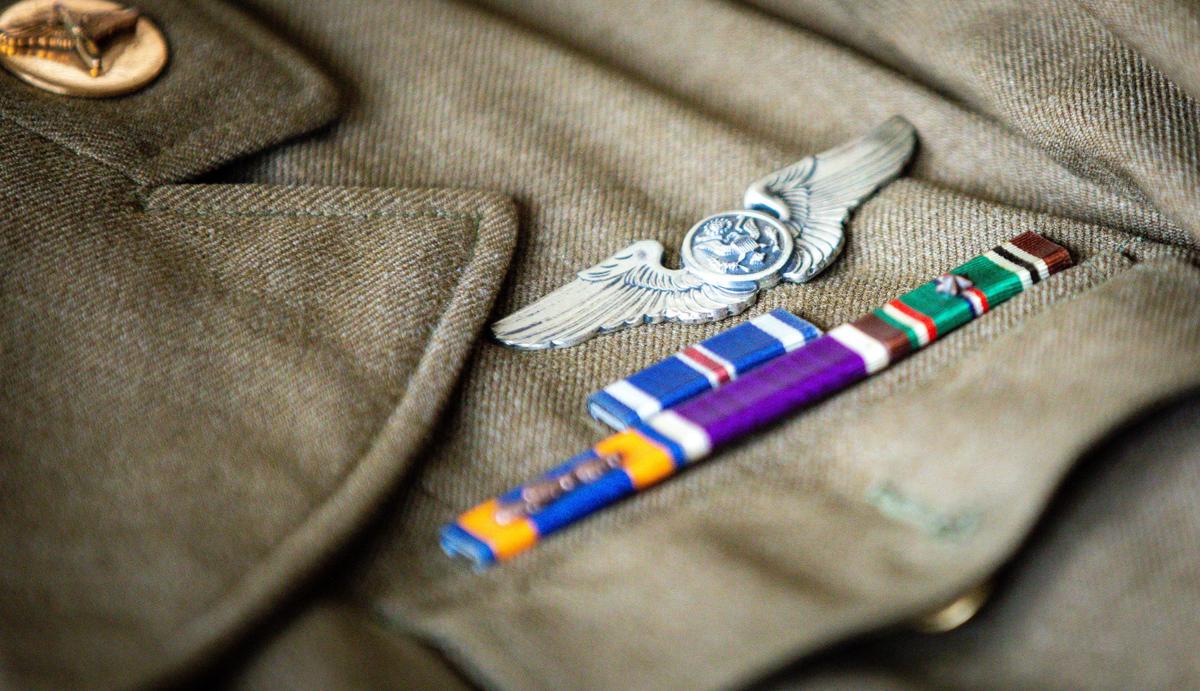 Morry Crow’s dress uniform with his wings and medals. 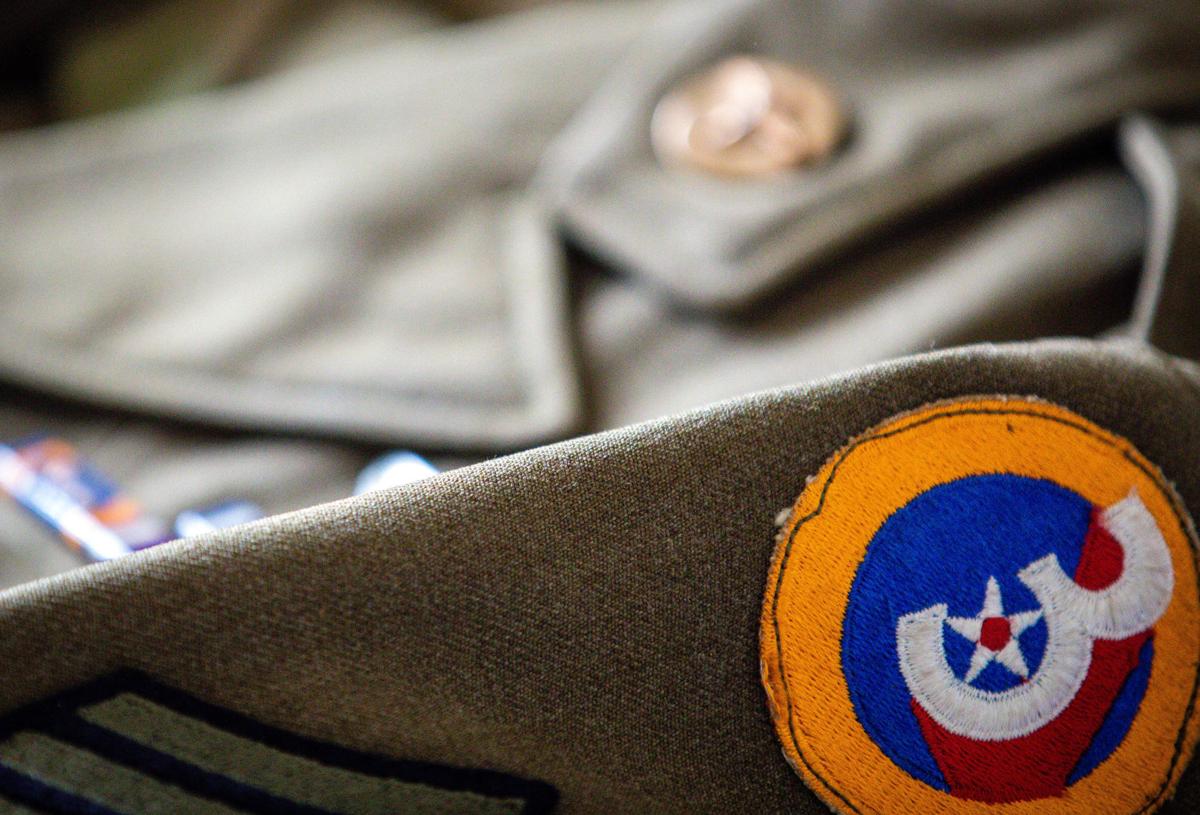 Morry Crow is an everyday hero.

Crow completed 30 missions as an aerial gunner in World War II. He flew missions in Norway and Germany and survived harrowing incidents during those missions. But while 10 of the 21 planes in his squadron didn't return, he and his crew were part of the "Lucky Bastards Club" as they were humorously anointed.

On three separate occasions, Crow was standing in the turret area behind the cockpit — with temperatures falling as low as 67 degrees below zero — when enemy fire damaged his plane. Once he was knocked out only to regain consciousness hanging by his own protective gear with shrapnel embedded in his thigh.

"It never even bled," Crow said. "It must have been really hot when it went in."

That firefight lasted for hours. The pilots involved said the fighting between the Flying Fortresses and German Messerschmitts lasted longer than most naval battles, according to newspaper reports at the time.

Catching burning hot shrapnel in his thigh wasn't even the worst injury Crow has endured in his life. One freak injury almost kept him from serving the country.

The tale of the accident that claimed his toe isn't for the faint of heart. Crow worked in a shingle mill. He slipped on some slick shingles and his foot slid under a machine. When he pulled off his boot, he found his severed toe in his sock. There was no ambulance service so Crow had to drive himself 3.5 miles to the hospital and ended up on crutches for a month.

"It took me about a year to recover my strength and balance," Crow said. "But after that year, I was playing baseball again."

Crow couldn't enlist even though he tried. The doctors quickly disqualified him because he had lost that toe. But a few months later when he was drafted, the missing toe was no problem and he headed off to the the Air Force.

Crow said his motivation to serve was simple. "Patriotism," he said.

When he was in training, he could have chosen a role on the ground crew but he selected the much riskier job of aerial gunner. When they started training, the airmen were told that many of them probably wouldn't make it back and several of them left for other positions, but not Crow.

"I knew I had to live with myself the rest of my life," Crow said.

He flew 30 missions with the 8th Air Force, 332nd Bomb Group. Those missions resulted in Crow receiving a Purple Heart, a Distinguished Flying Cross and a Presidential Commendation.

His home was in Washington state, but when he returned from the war, he was stationed at Ellsworth Air Force Base. It was here in Rapid City that he met the love of his life, Lucille. They were married 60 years and eight months before she passed away in 2006. She worked in local banks for more than four decades. Crow ran a bulldozer, digging basements and completing other projects. They moved to Silver City in 1972 just before the flood ravaged the Rapid City area.

He still owns a cabin in Silver City.

Crow said for years he couldn't believe how good he felt considering his advanced age. He worked out on a stationary bike every day. He said the past few weeks, he hasn't been able to keep that schedule and it bothers him that he can't get around as well as he could.

But Crow isn't afraid of a fight now any more than he was more than 75 years ago. He is still planning on being in the Veterans Day Parade on Monday in Rapid City and he is looking forward to the Silver City Ice Cream Social and his 100th birthday next April.

Until then, he enjoys spending time with his friend Bill Casper and the company of the employees at the Good Samaritan Society's St. Martin's Village.

"I appreciate every minute Bill spends with me," he said of their weekly cribbage games. "And the employees and people who take care of me here are the best. There are none better."

A newspaper article announcing the awarding of the Flying Cross to Morry Crow.

A photograph of Morry Crow with his wife, Lucille.

Morry Crow’s dress uniform with his wings and medals.