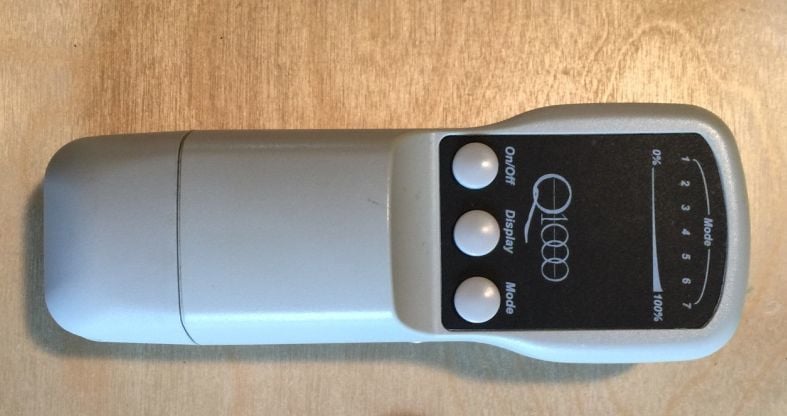 A Q1000, one of the laser medical devices made and sold by Larry Lytle. 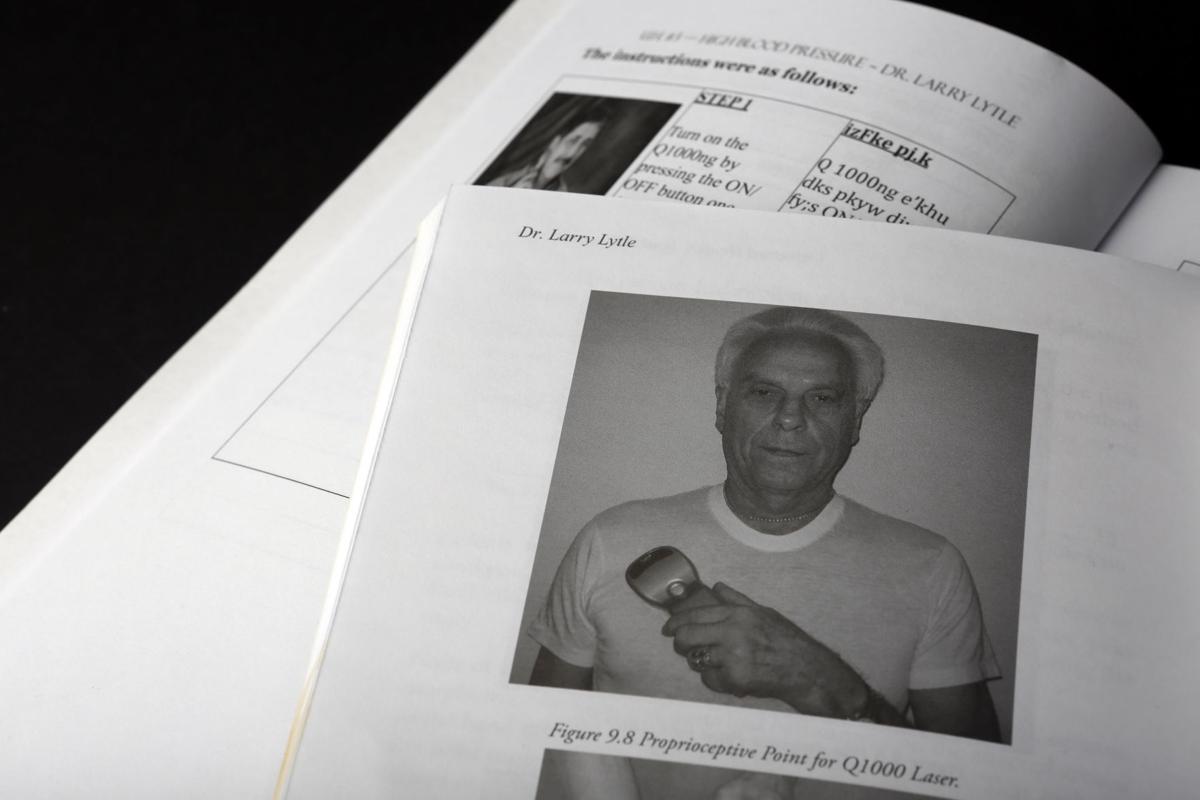 In this self-published book, Larry Lytle demonstrates the variety of ways he says his QLaser can be used.

An 83-year-old Rapid City man was sentenced Friday to 12 years of custody for his leadership of a nearly $17 million medical-laser scheme.

It was acknowledged by the judge and by the attorneys on both sides of the case that the sentence could be one of death for Larry Lytle, who will have to reach 95 years of age to complete his prison term.

Based on Lytle's old age and his various medical conditions, the judge recommended that Lytle be evaluated for possible placement in a medical facility managed by the Federal Bureau of Prisons.

Lytle's sentencing came near the end of seven hours of proceedings at the federal courthouse Friday afternoon and evening in Rapid City, during which two of Lytle’s co-conspirators were also sentenced.

All three could be ordered to pay restitution, but resolution of that issue was postponed for 90 days while more information about victims is gathered.

One of the prosecutors, Kevin Koliner, of the South Dakota U.S. Attorney’s Office, told U.S. District Judge Roberto Lange that the cases were extraordinary for South Dakota.

Lytle, who was a prominent member of the Rapid City Council during the 1970s, began selling his handheld medical laser devices as early as 2001 after his dentistry license was revoked for malpractice during the 1990s.

Lytle obtained clearance from the U.S. Food and Drug Administration in 2009 to market some of his laser devices for treatment of pain associated with osteoarthritis of the hand. But instead of complying with that limited clearance, Lytle and dozens of distributors claimed in marketing materials and sales presentations that the devices could treat hundreds of medical conditions ranging from headaches to serious diseases including AIDS, cancer, Lou Gehrig’s disease and Alzheimer’s. Meanwhile, Lytle told the FDA that he was selling the devices for veterinary use only.

Although some customers continue to believe in the effectiveness of the devices, others have said the devices were useless at best and harmful at worst. There were no peer-reviewed scientific studies to support the marketing claims that the device could treat hundreds of medical conditions.

About 20,000 devices were sold — including many to customers who were elderly or suffering from serious medical conditions, who attended sales presentations — for gross revenue of nearly $17 million. Several victims who gave statements by video recording or in person Friday said they spent between $3,800 and $9,000 apiece for their devices, which were called QLasers.

In 2015, a federal judge issued a temporary injunction and then a permanent injunction ordering a halt to the sale of the devices. A later investigation found that Lytle, Weir and Kossovskaia conspired to continue selling hundreds more devices in violation of the court orders.

For those violations of the previous court orders, Lytle, Weir and Kossovskaia had all pleaded guilty prior to Friday — Weir and Kossovskaia to the charge of conspiracy to introduce misbranded medical devices into interstate commerce with the intent to defraud and mislead, and Lytle to the same charge plus a charge of criminal contempt.

In recent days, Lytle had made last-ditch attempts to withdraw his guilty plea and fire his lawyer, Ellery Grey, but both motions were denied. Lytle had earlier tried to renege on his plea agreement, and in recent weeks had sent a threatening letter to prosecutor Ross Goldstein, of the Consumer Protection Branch of the U.S. Department of Justice.

As a result of his antics, Lytle’s pretrial release from custody was revoked last week, and he had been housed at the Pennington County Jail since April 11 after many months of living at home with an electronic ankle monitor. He was brought to court Friday in black-and-white striped jail clothes. He used a walker to get around the courtroom.

When Lytle was given a chance to speak, he delivered a 45-minute oration that did not include an apology or an expression of regret. He described his QLaser devices as “tomorrow’s medicine here today.”

“I make no apologies for the QLaser,” he said. “I believe in it.”

Even after his sentence was pronounced, Lytle continued making defiant statements, at one point rising to say, “I do not accept or consent to incarceration on behalf of the defendant” — a statement that was ignored by the seemingly perplexed Judge Lange.

The marathon proceedings started with statements from victims and then progressed through the sentencing of each defendant individually. Arguments came from lawyers on both sides, and each of the defendants gave their own statements.

The most emotional and pointed moments of the day came when the Rutherford family addressed Lytle directly. Walter Rutherford said his wife so believed in her QLaser that she forsook conventional medical treatment in favor of laser therapy — a decision that Rutherford said hastened her death.

Three of Rutherford’s minor children stood with him as he gave his statement, and two gave their own statements. Rutherford’s teenage daughter pointed at Lytle and raised her voice as she tearfully recounted her mother’s suffering.

“My mom,” the girl said, “died believing in something that was never going to help.”

In laser case, Lytle lands in jail for alleged violation of release conditions

Admitted laser swindler Larry Lytle has paid $637,000 in restitution so far as he awaits sentencing, according to federal court records.

Larry Lytle changed his mind once again and decided to take a plea deal.

Alleged medical-laser swindler Larry Lytle reneged on his eight-day-old plea agreement Wednesday, which in turn wiped out an agreement to drop…

A U.S. magistrate judge ruled Friday that an elderly Rapid City couple may resume living together but may not discuss their criminal case.

Laser Man: The Rise and Fall of Larry Lytle

A Rapid City man has been ordered to pay $12.08 million to customers he defrauded and misled into buying his medical laser devices.

A Q1000, one of the laser medical devices made and sold by Larry Lytle.

In this self-published book, Larry Lytle demonstrates the variety of ways he says his QLaser can be used. 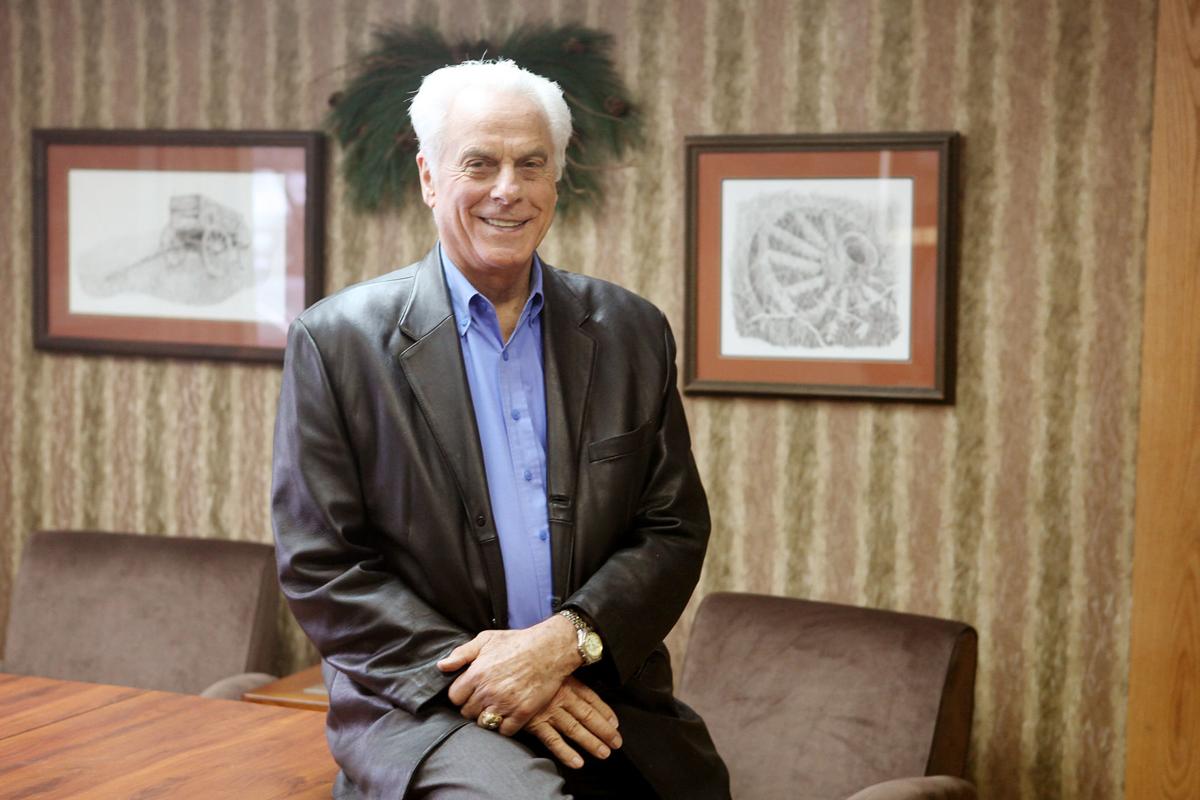 This photograph shows Larry Lytle at his office in Rapid City in December 2011. At the time, he was selected as one of the Rapid City Journal's "12 to watch in 2012" news feature.