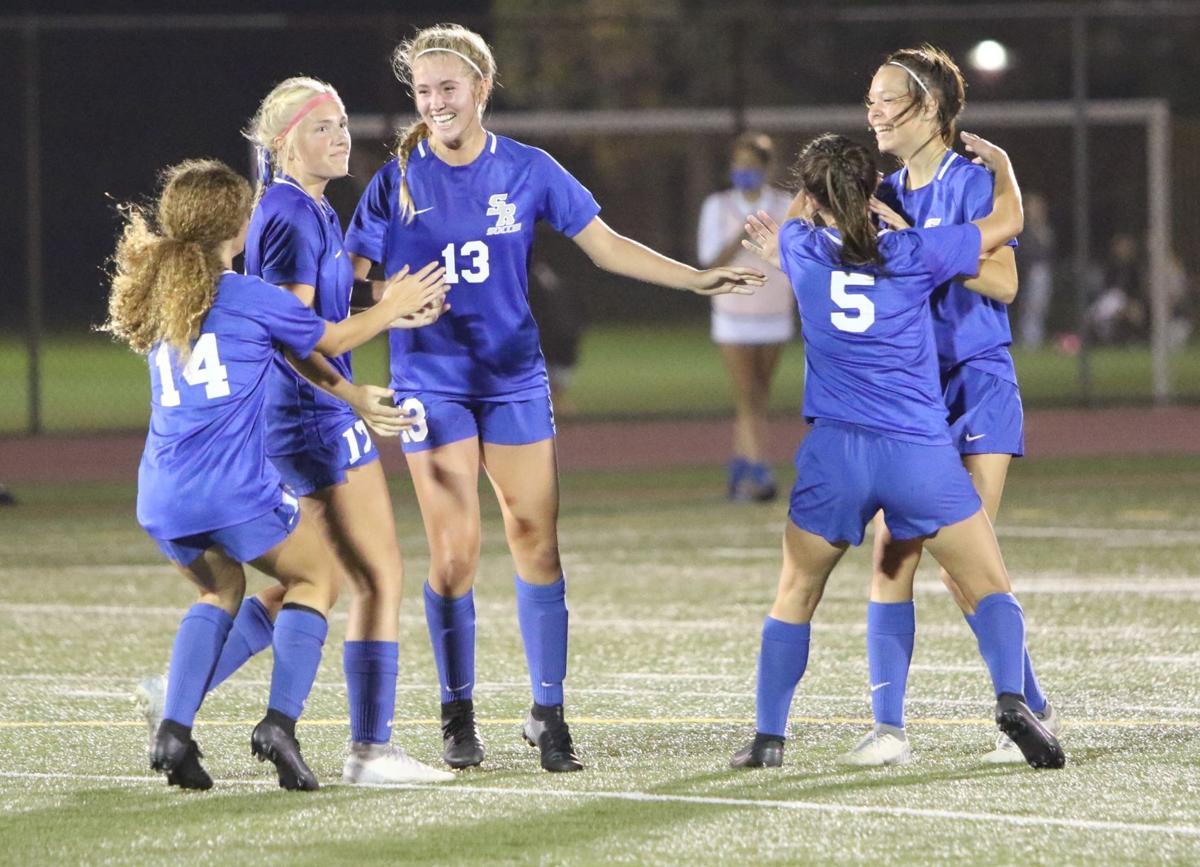 Shea Ellender, 13, celebrates with her Rapid City Stevens teammates after scoring a goal from over 60 yards to tie Tuesday's game with Rapid City Central 3-3 at Sioux Park. 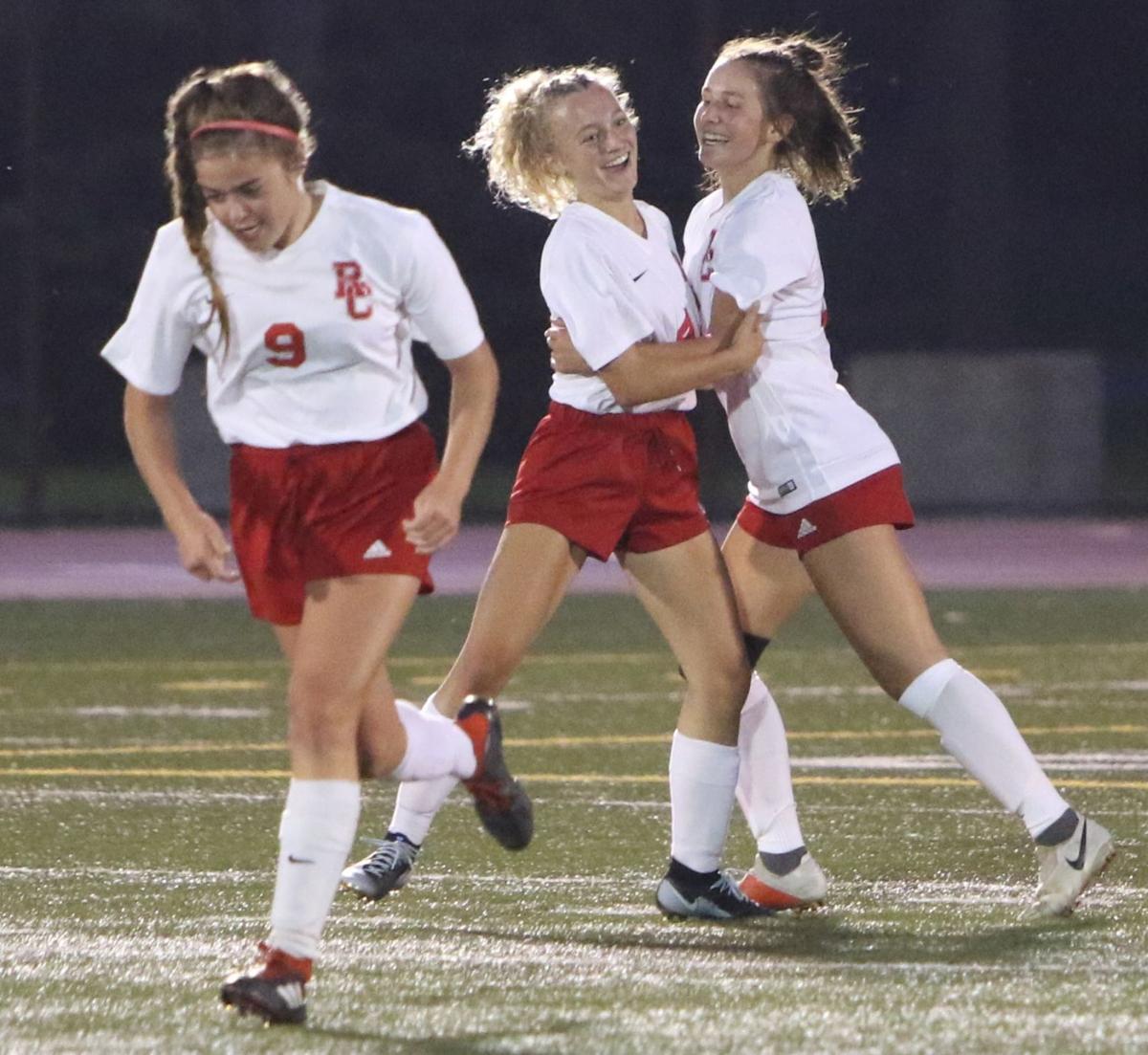 Shea Ellender was only trying to get the ball into enemy territory.

Down a score in the final six minutes, Rapid City Stevens needed an equalizer, and Ellender wanted to help make that happen by sending a kick more than 60 yards toward the opposing goal, where her teammates could take of business.

But instead, the ball found its way into the net after bouncing over the goalkeeper to level the match 3-3 with Rapid City Central.

“I had no idea it was going to be able to go in. I was just going crazy, so happy, and just amazed,” Ellender said. “I don’t even know if I can wrap my head around it. It just blows my mind, and it was huge luck I would say.”

The score stood at the final whistle following several late pushes by the Raiders, who notched their first draw of the season Tuesday night at Sioux Park in girls soccer action.

“Last time (against Central), we clearly had the heart and desire to be out here,” Stevens head coach Luis Usera said. “This time I would say, for most of the game, they had more heart than us, but when it mattered we found some heart.”

A win would’ve meant a fourth-place position and a first-round home playoff game for the Cobblers, who were that close to a victory over their rivals.

“Last game we just came out soft. (Stevens) came in with high pressure and they got in our heads, and the girls got snippy on each other and they just broke down. Tonight, just the opposite,” Central head coach Mark Morgan said. “They played well the entire game, a couple of minutes of letup when we got a little tired, but tonight they had very positive attitudes, just solid teamwork and we got back to our game, which is moving the ball.”

The contest remained scoreless through the first 34 minutes — where neither squad put a shot on goal through the midpoint of the first half — until Makaen Degeest scored the match’s first goal off a second-effort corner kick to put the Cobblers (6-1-3) on the board.

The Raiders (8-1-1) responded a minute later with a goal of their own from defender Taylor Witt on a corner kick, before Keyera Harmon fired in a right-to-left goal from outside the box a minute after that to make it 2-1 Central.

Stevens’ Abbie Noga leveled the match before halftime on a goal, assisted by Leah Arnold, in the 39th minute.

“We’re trying to talk about the difference between being a good team and a great team, and a great team, no matter what’s going on, finds a way to put the ball in the net,” Usera said. “They found a way to (tie), and these girls are starting to believe. We’ve got some adjustments to make, but the girls found it in them to not let that get in their heads.”

Degeest tallied her second goal in the 49th minute to put her team back ahead, and the next 25 minutes were scoreless until Ellender’s goal from deep came in the 75th minute. The Raiders had a few ensuing opportunities to grab their first lead of the night, including two set pieces and two corner kicks, but failed to convert.

“The win would’ve been really big for us. It would’ve been a big help points-wise, but that’s a tough read when a ball is bouncing, and it’s coming in hard and at a funny angle,” Morgan said. “She misread it a little bit, but that’s an easy thing to do.”

Stevens hosts Spearfish Sept. 29 for its regular-season finale, while the Cobblers wrap up their regular season slate Saturday against Spearfish.

Shea Ellender, 13, celebrates with her Rapid City Stevens teammates after scoring a goal from over 60 yards to tie Tuesday's game with Rapid City Central 3-3 at Sioux Park.