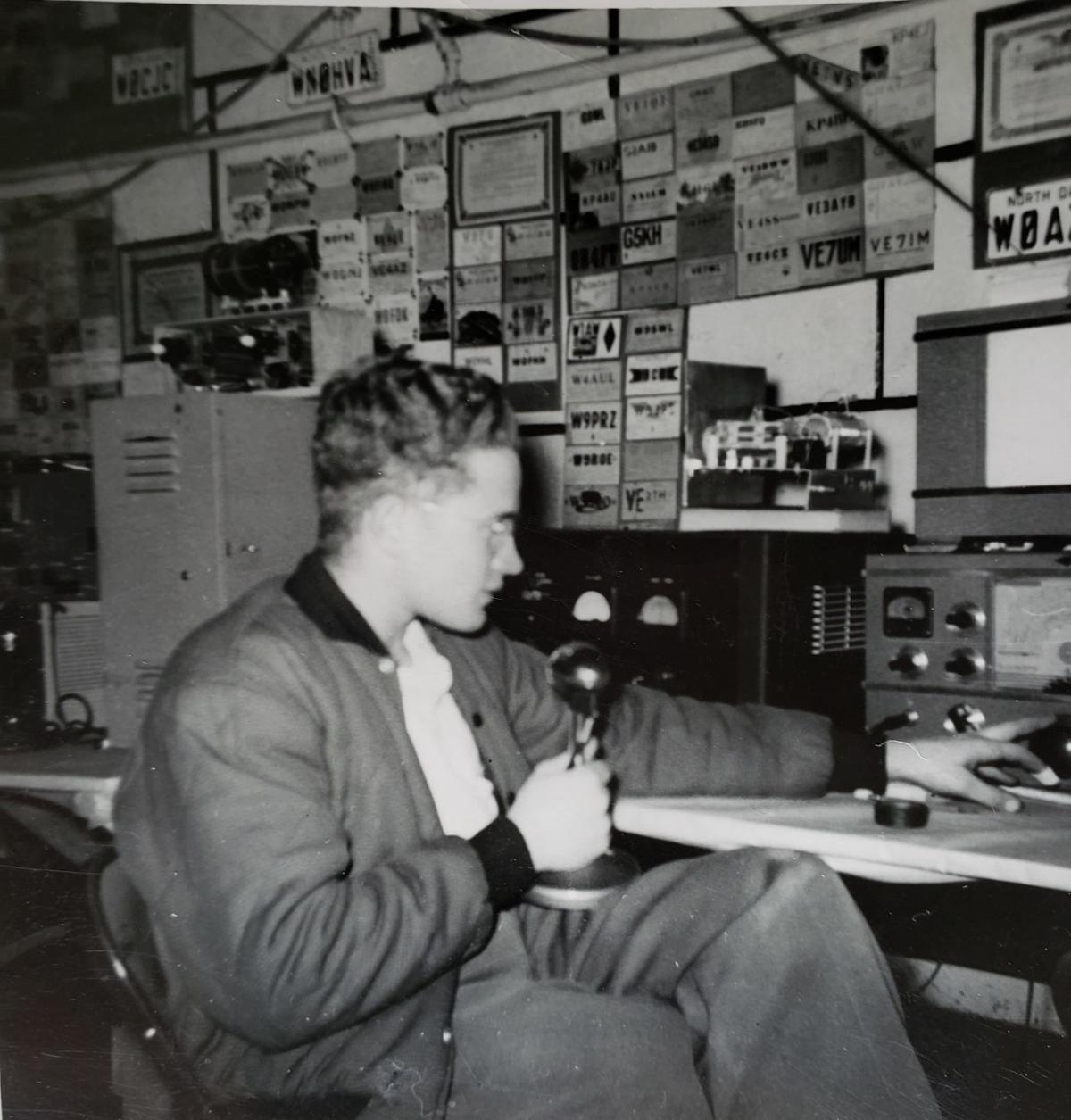 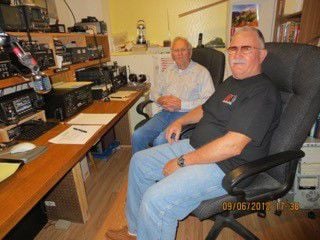 Lewis Rohrer, in front, shared this photo of himself and a radio buddy in the room Rohrer calls his "ham shack."

Sapphire Lane lost its signature radio antenna and tower this month when the neighborhood’s amateur radio operator, Lewis Rohrer, signed off from his longtime hobby.

“It was the landmark of Sapphire Lane,” Rohrer said, chuckling as he recalled that when his neighbors had company, they gave directions “look for that big tower and we live near that.”

For Rohrer, selling his tower and antenna that stretched to 70 feet high, and selling some radio equipment, wraps up a lifelong passion. Radio put him in contact with people around the world. A radio operator from Selby bought Rohrer’s antenna and tower, dismantled them and removed them June 12.

“I’ve enjoyed it and I’ve done my thing,” Rohrer said.

Rohrer was a longtime member, former president and former treasurer for the nonprofit W0BLK Black Hills Amateur Radio Club. Rohrer, known by his call sign K0LEW, was one of between 75 and 80 amateur radio operators in the Black Hills.

Rohrer grew up on a farm in North Dakota during the Depression and World War II. From childhood, Rohrer had a fascination with mechanical things, especially radio.

“My dad always subscribed to ‘Mechanix Illustrated’ and when he wasn’t reading it, I devoured it as a young lad and read articles about radio,” Rohrer said.

“About 1940 or 1941 there was an article about ordering a crystal radio kit. I scrounged what money I had and ordered that and built it. … I wound my own coil and used a (detector called) a cat whisker on a little round piece of galena crystal, and I really ate that up,” he chuckled. “We never did have electricity on the farm. The radio was strictly powered by the airwaves (radio signals).”

“They just boomed in our little farmhouse and it was late at night and I know I’d fall asleep with my earphones on, listening. That’s what really got me into it — building my own radio,” he said.

Rohrer and his family moved from the farm, and in the mid-1940s Rohrer had the opportunity to join the Bismarck amateur (ham) radio club.

“I tried to learn more about radio but I struggled with radio tube theory that you had to (know) to get licensed,” Rohrer said. “In the 1950s, I joined the Air Force and finally did more studying. I finally got my first license (from the Federal Communications Commission), which was a novice license. It was strictly Morse code stuff.”

“As a novice, it was a hobby. You talked to other people that were on the air that did American Morse code. I think it was five or eight words a minute. Today nobody uses code anymore,” Rohrer said.

Rohrer, who jokes that he always wanted to move south, has lived in South Dakota since 1956 when he was stationed at Ellsworth Air Force Base during the Korean War. After four years in the Air Force, Rohrer spent his 30-year professional career as a banker. Banking gave him skills that aided his radio hobby.

Rohrer upgraded to become a general class license holder, and then held an advanced license for many years, he said. One of his friends talked him into taking the test to earn an extra class license, which is highest level of license of amateur radio operators.

“It’s a lot of theory and algebra and trigonometry … because you had to calculate out antennas and circuits and design circuits,” Rohrer said. “I guess during my professional career I did a lot of math because it came easy and then I finally got the extra class license.”

Rohrer still has his extra class license, which he first earned 35 years ago, and his call sign remains active. He retired from banking 30 years ago, and Rohrer recalled many opportunities and adventures radio has brought him in his retirement years.

“I talked all around the world to various (ham radio operators) in different countries, and that was fun. English is the international language to talk on ham radio. People that would try to speak English would do their best and speak slow, but we made it through and talked about mainly radio. No politics and no religion. That was subjects you stayed away from to make sure everything was friendly,” Rohrer said. “If I would be wanting to contact anybody on the airwaves, I would call and say this is K0LEW, Rapid City, South Dakota, listening for anybody that would like to talk to me.”

A tradition that’s fading is for amateur radio operators to exchange postcards. Rohrer estimates he’s got a stack of thousands of postcards from all over the world.

“In past years, when we would talk to a ham we hadn’t talked to before, we would mail a QSL, a 3-by-5 card with the date we contacted them and the frequency and maybe a short note,” Rohrer said. “But with postage costs, it’s kind of a lost art.”

Rohrer was part of amateur radio emergency services in the Black Hills. Among his many contributions over the years, he designed a system for emergency use for Pennington and Meade counties using a digital form of radio instead of code or voice.

“You had to have the proper equipment in order to listen in, so it was fairly secret from the general population,” Rohrer said. “In an emergency, you don’t want to just pass out information.”

During an emergency such as the 1972 flood, radio operators could use a laptop computer and necessary equipment and travel among Red Cross or other shelters trying to track down relatives or provide other communication as needed, Rohrer said.

When the 1972 flood hit, Rohrer was in demand for his flying skills he’d learned in the Air Force, not his radio expertise. At the time, Pennington County Sheriff Glen Best owned his own plane, and Rohrer had a pilot’s license.

“I flew Glen’s plane up and down Rapid Creek trying to see if I could find bodies. That was my expertise at the time,” Rohrer said.

During Desert Storm and Desert Shield, Rohrer became a military operator on military frequencies. Military-affiliate radio stations were appointed by the government, he said.

“We had special call signs to get onto the military frequencies to pass traffic between the United States and Saudi Arabia. I believe I was the only one in the Black Hills area (in that program) that talked directly to Saudi Arabia and Kuwait,” Rohrer said.

In those days before smartphones, texting and Zoom, Rohrer provided a vital service to military families. He didn’t pass along military information to Saudi Arabia and Kuwait. Instead, he gave Black Hills area families a means to communicate with deployed loved ones.

“I had my radio system here in my home tied into the telephone circuit so I could catch a GI on the radio and switch it to my phone and call his wife or girlfriend, and they could talk back and forth. I enjoyed doing that because I was retired at the time and always looking for something to do,” Rohrer said.

Radio never failed to give him something to do. Rohrer installed and removed radio antennas on the KOTA radio tower and at Terry Peak for other amateur radio operators. He gave demonstrations of ham radio for tourists at Mount Rushmore, and for the public at special events.

His wife had been a teacher, so Rohrer also gave presentations in local fifth- and sixth-grade classrooms.

“I took my portable stations and I’d take it into the classroom and set up the antenna wherever I could run a coaxial cable into the classroom and make contacts and let the kids talk to various people. I took my portable computer and set that up and I’d send international Morse code and the computer would print it out in English so the kids could see what I was sending and receiving,” Rohrer said. “The kids ate that up. That was fun. They seemed to get a big charge out of that.”

None of those students got involved in ham radio, Rohrer said. Radio doesn’t seem to intrigue younger generations.

“In this day and age it’s hard to get young people interested in amateur radio. They’ve got cell phones. They don’t need to learn what radio is all about to talk to people wherever. Unless they’ve really got an interest in radio, it’s tough,” Rohrer said.

Lewis Rohrer, in front, shared this photo of himself and a radio buddy in the room Rohrer calls his "ham shack."