Become a Member
Read Today's E-edition
Share This
Max Coatta, against former team, records hat trick to give Rush comeback win over Idaho
Share this
1 of 3 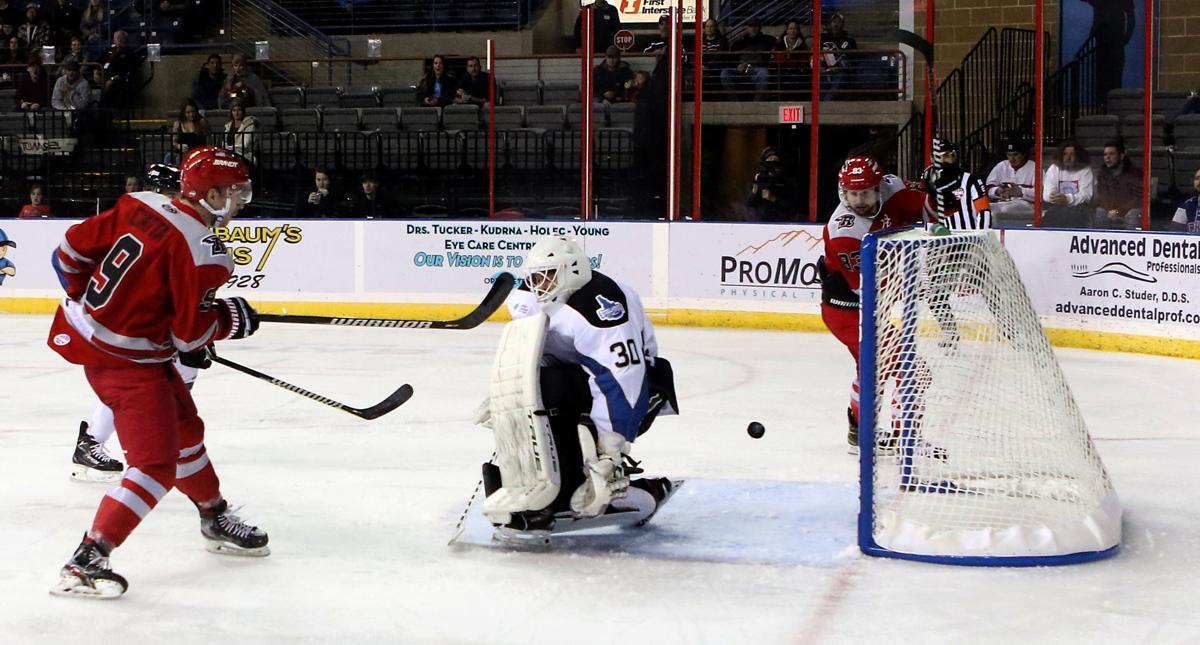 Rush forward Max Coatta (9) shoots the puck past the Idaho goalie to tie the game in the second period Friday night at The Monument Ice Arena. Coatta had a hat trick in the 4-2 win. 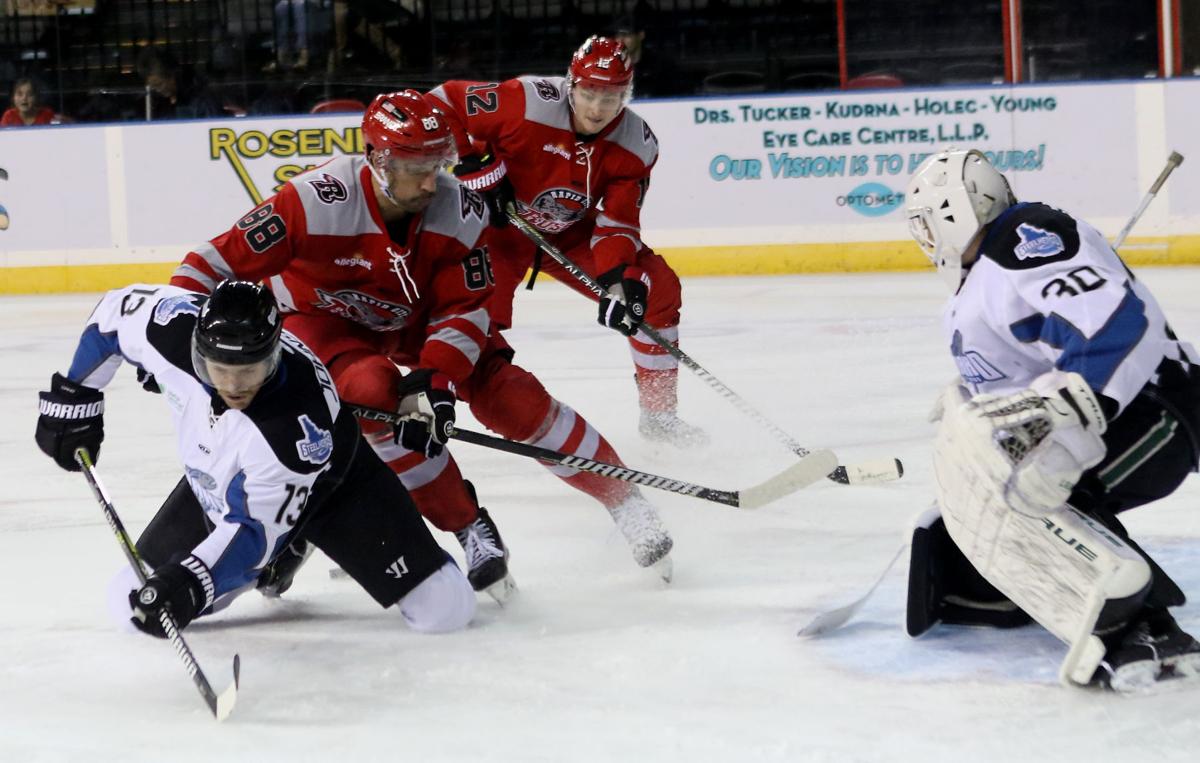 Rush forward Garrett Klotz takes down a defender as Tanner Schachle tries to find the puck for a shot. 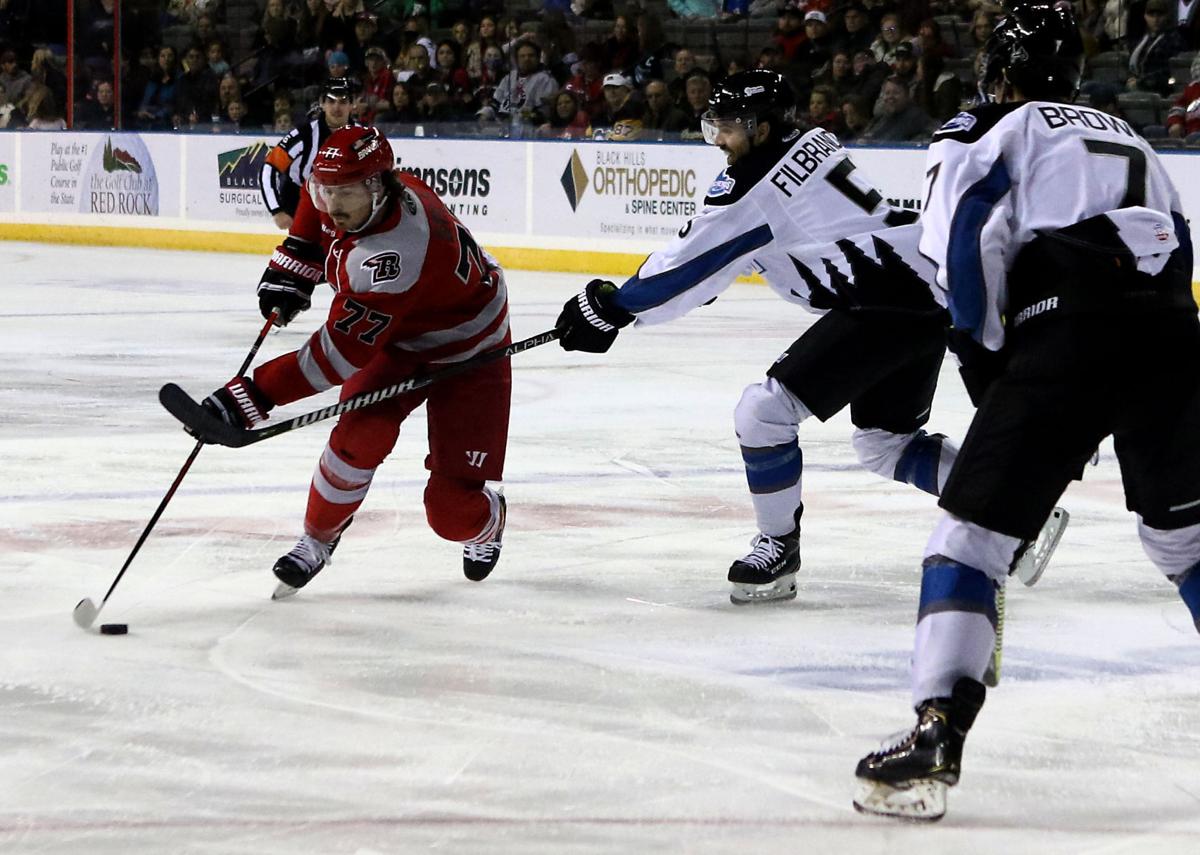 Rush forward Stephen Baylis drives the puck toward the crease Friday night against the Idaho Steelheads.

Before a 68% capacity crowd at The Monument Ice Arena, the Idaho Steelheads roared out to a 2-0 lead and seemed poised to extend the Rush losing streak to five games.

Max Coatta and company had other plans.

The 5-foot-10 Minnesota native, who spent the 2019-20 season in the Gem State, potted the game-tying, go-ahead and insurance goals to record his first-career hat trick and lead Rapid City to a 4-2 comeback victory.

“Any time you can help your team win it’s a good feeling,” Coatta said. “We had a slow start tonight, but I thought as a group we really bounced back in the second, and that was a big character win for our group.”

Coatta tallied seven goals and six assists in 42 games for the Steelheads (5-5-0) during their 2019-20 campaign, but with the hat trick he has already accumulated four goals and one assist for the Rush (3-4-1) this season.

“For a guy who works that hard every single day and is a constant pro, he needed something like that,” said Rush head coach Scott Burt, who was an assistant with the Steelheads when Coatta was there. “And that got our whole group going.”

Lukas Parik, the 20-year-old Czech, got his third start between the pipes and bounced back from a shaky opening frame and recorded 25 saves to pick up his inaugural ECHL win.

“It feels good, and the guys really played well in front of me, so they made it much easier,” Parik said. “It’s not even about me, our team just got our game to another level.”

Parik surrendered his first goal after stretching out of the crease to make a stop, leaving Will Merchant to bury an open rebound at 10:48 of the first period.

Zack Andrusiak made it 2-0 when he shoved in a puck on a power-play chance that Parik tried to fall back on to cover up but failed to freeze at 18:19. Rapid City, which went on to kill the next four power plays, has now allowed a power-play goal in four straight contests.

Coming out of the box following a delay-of-game infraction, Chase Harrison grabbed hold of a puck and fired a halfhearted wrister off the blue line that found its way to the back of Matt Jurusik’s net to get the Rush on the board at 2:26.

Five and half minutes later, Jake Wahlin corralled a turned-over puck in the offensive zone and unleashed a shot that Jurusik deflected, falling to Coatta, who stuffed in the equalizer at 7:56 and sent the game into the final period deadlocked at 2-2.

Fireworks popped off in the third period when Garrett Klotz, fresh off a two-game suspension, dropped his mitts and went toe-to-toe with Andrusiak at 8:28, resulting in an instigating minor. During their fight, newly-acquired Tanner Schachle, playing in his second Rush game, got into it with former Rush skater Darren Brady, resulting in game misconduct penalties for both, which sent the pair to their dressing rooms early.

A cross-checking infraction gave Rapid City just its second man-advantage of the night, and Coatta capitalized by directing a shot on net on an offensive zone entry that ricocheted off Jurusik and trickled into the net for the go-ahead goal at 11:37.

He added his third in the final-minute scramble by sniping an empty net from the top of the right circle with 35.5 seconds left, sending about a dozen chapeaus to the ice.

“It was up to them,” Burt said of his squad. “We could’ve gone one way or we could’ve gone the other way, and they just stuck to the systems, they bought in and they continued to grind.”

Parik moved to 1-1-1 on the young season with the win.

“He gave us an opportunity to win. That’s for sure. He kept us in there,” Burt said of Parik. “They had some pretty good, grade-A chances that we gave up, and for a young guy to do that, I know he was very excited for that. A long-time coming for him.”

The Rush and Steelheads, now at 1-1 in the series, will play the rubber match Saturday. Puck drop is slated for 7:05 p.m. at The Monument Ice Arena.

Rush forward Max Coatta (9) shoots the puck past the Idaho goalie to tie the game in the second period Friday night at The Monument Ice Arena. Coatta had a hat trick in the 4-2 win.

Rush forward Garrett Klotz takes down a defender as Tanner Schachle tries to find the puck for a shot.

Rush forward Stephen Baylis drives the puck toward the crease Friday night against the Idaho Steelheads.