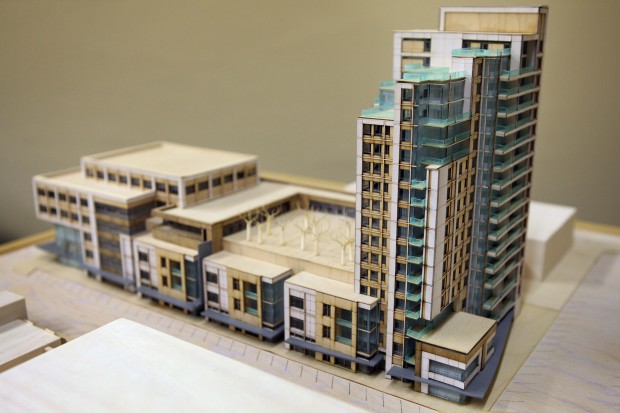 This is a model of Presidents Plaza shown in November 2011. Developers have since reduced the height of the proposed residential tower by two stories. (Ryan Soderlin/Journal staff) 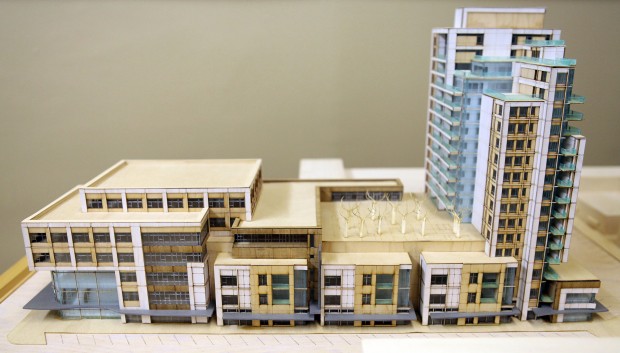 This is a model of the Presidents Plaza. It was taken on Nov. 7, 2011. (Ryan Soderlin/Journal staff)

The Rapid City Council provided a resounding show of support Monday for Presidents Plaza voting 10-0 in favor of a request to lift a $5 million cap on tax-increment financing for the long-anticipated public-private development.

The council's action will free up $11.7 million in TIF money for the project's public improvements, including $9.2 million for a public parking garage with 575 to 600 stalls, and allow the mixed-use development to continue forward.

As proposed, the $41 million to $48 million proposal for Sixth and St. Joseph streets would feature 80,000 square feet of commercial space, including a hotel and convention center, 30 condominiums and up to 600 parking spots.

"We're taking a piece of property that hasn't had anything on it for 35 years, and we're going to put it back on the tax rolls," said Ward 4 Alderman John Roberts, who supported the change. "That's what TIFs were intended to do. They're intended to generate economic growth within our city."

The amended master development agreement approved Monday will restore the TIF money for the project to the same levels approved in 2007 when the TIF district was created - $11.7 million for public improvements and up to $11.4 million in financing interest.

The $5 million cap was put in place in 2009 by the previous development team. The new group, Presidents Plaza LLC, took the project over in February after its predecessors struggled to secure the needed private financing for more than a year.

Hani Shafai, president of Dream Design International and partner in Presidents Plaza LLC, said the project will be a benefit to the entire community, turning a city parking lot that generates no property taxes into a $40 million building that pays $800,000 a year in real estate taxes.

Shafai also provided more details on the project's scope Monday. According to his presentation, the exterior of the building would be identical to the Rushmont project he proposed for the same spot in 2007, including a residential tower that would be about 17 stories tall.

The council vote came after more than two hours of public testimony and debate, with Mayor Sam Kooiker, state Sen. Stan Adelstein and developer Steve McCarthy among those speaking out against lifting the cap.

Kooiker, who asked the council to re-bid the project, said when the new development group took over the project, it promised a transfer, not a transformation.

"An RFP process is a process that brings integrity ...," Kooiker said.

Adelstein, who also owns property downtown, questioned how the project could meet the five-year deadline for using TIF money as required by state law. The deadline for the downtown TIF is May 7, 2012.

"You will not be able to pay anything after the time is up in May," Adelstein said. "There is no way it's going to be built by that time."

But acting City Attorney Tamara Pier said the city's interpretation of state law is that as long as the improvements are under contract for construction within the five-year window, they qualify for TIF reimbursement.

Ward 3 Alderman Dave Davis, who also voted in favor of the amendment, said Presidents Plaza LLC has a valid contract with the city and warned of potential legal consequences if the city arbitrarily decided to request new proposals.

"To vote any other way than to go forward is voting against your own integrity," Davis said. "I find that very difficult to do."

After the vote, Ward 2 Alderman Steve Laurenti said he misunderstood the motion and had meant to vote against the amendment, but the official record will be a 10-0 vote.

Do you think the Rapid City Council should have lifted the $5 million cap on tax-increment financing for Presidents Plaza?

This is a model of Presidents Plaza shown in November 2011. Developers have since reduced the height of the proposed residential tower by two stories. (Ryan Soderlin/Journal staff)

This is a model of the Presidents Plaza. It was taken on Nov. 7, 2011. (Ryan Soderlin/Journal staff)