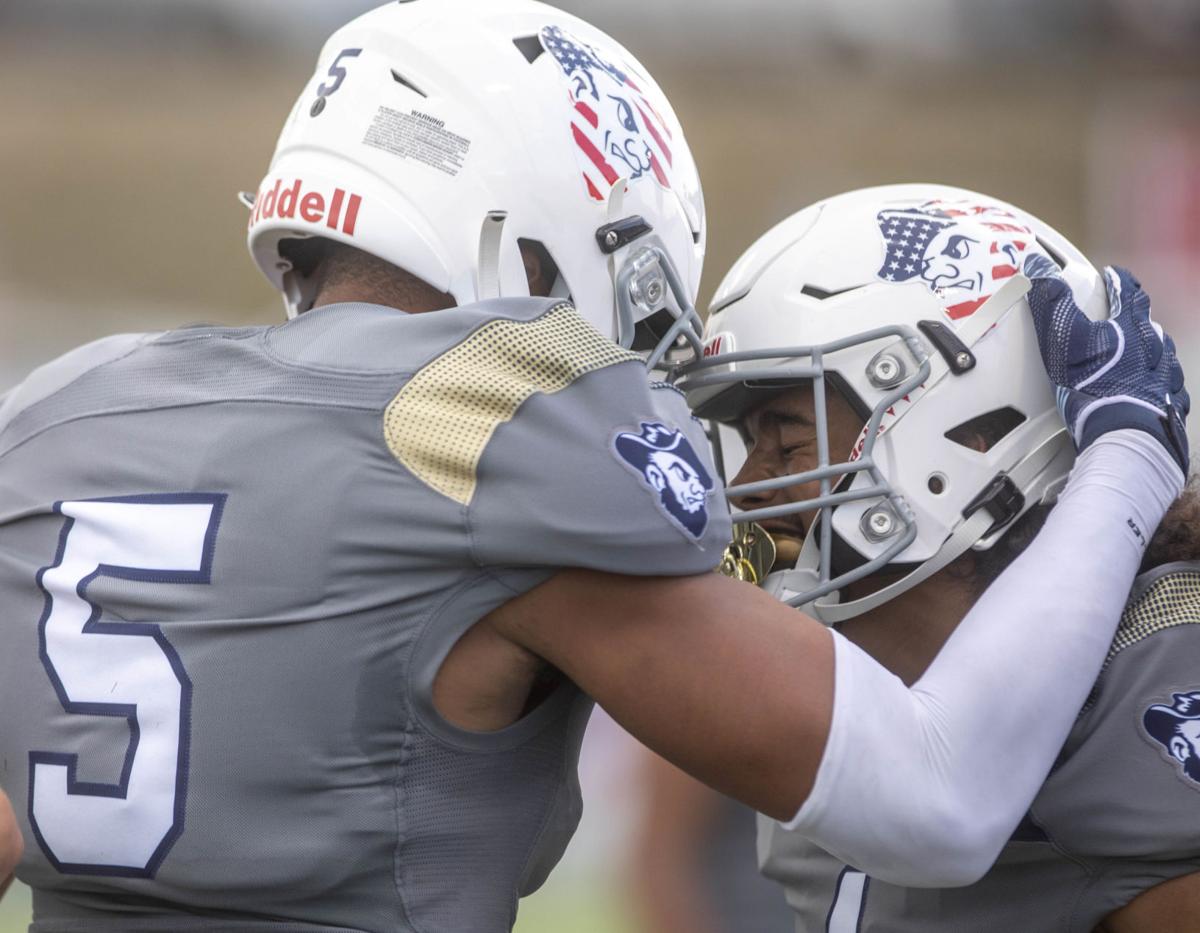 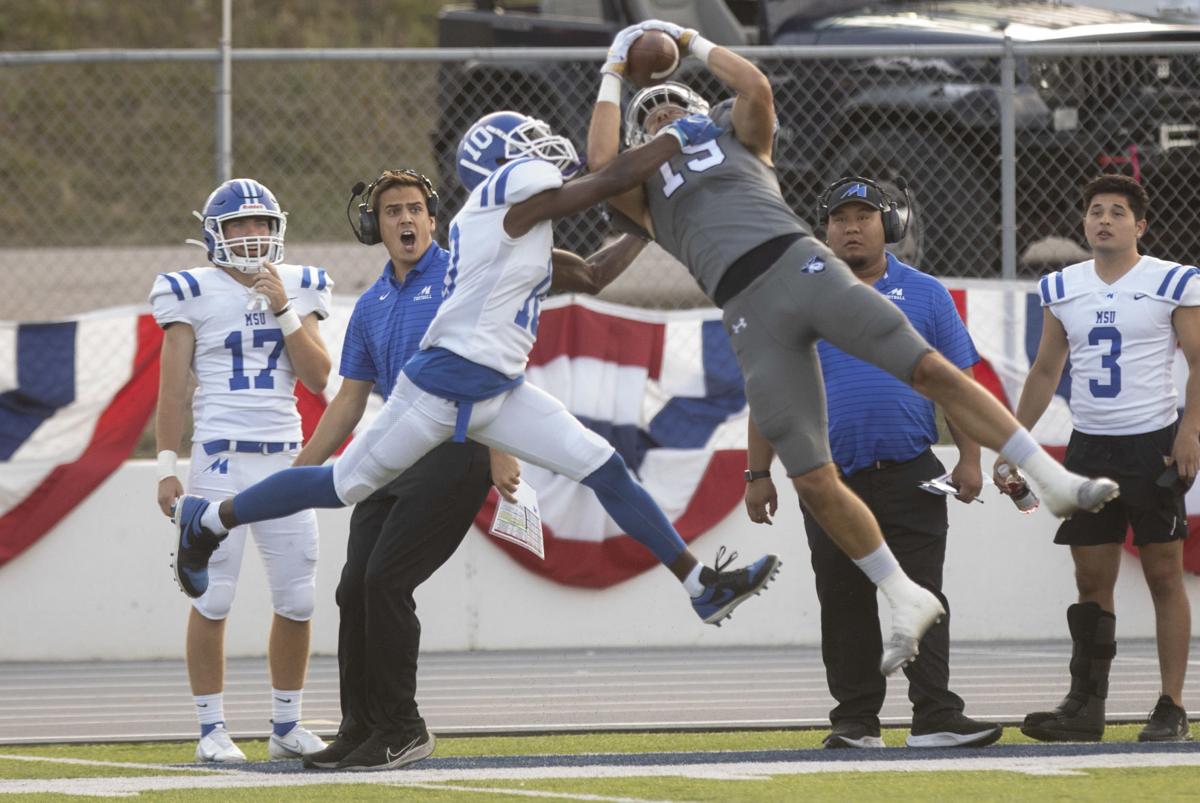 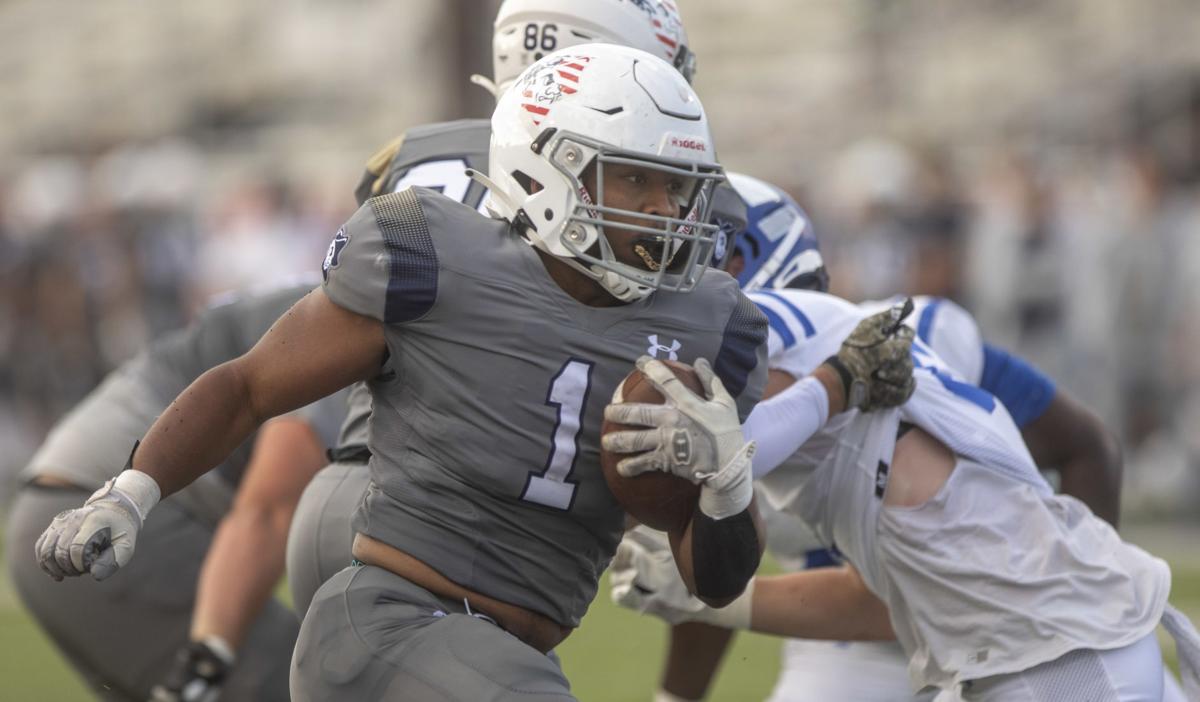 South Dakota Mines freshman Orlando Westbrook-Sanchez III runs into the end zone for a touchdown on Saturday at O'Harra Stadium in Rapid City. 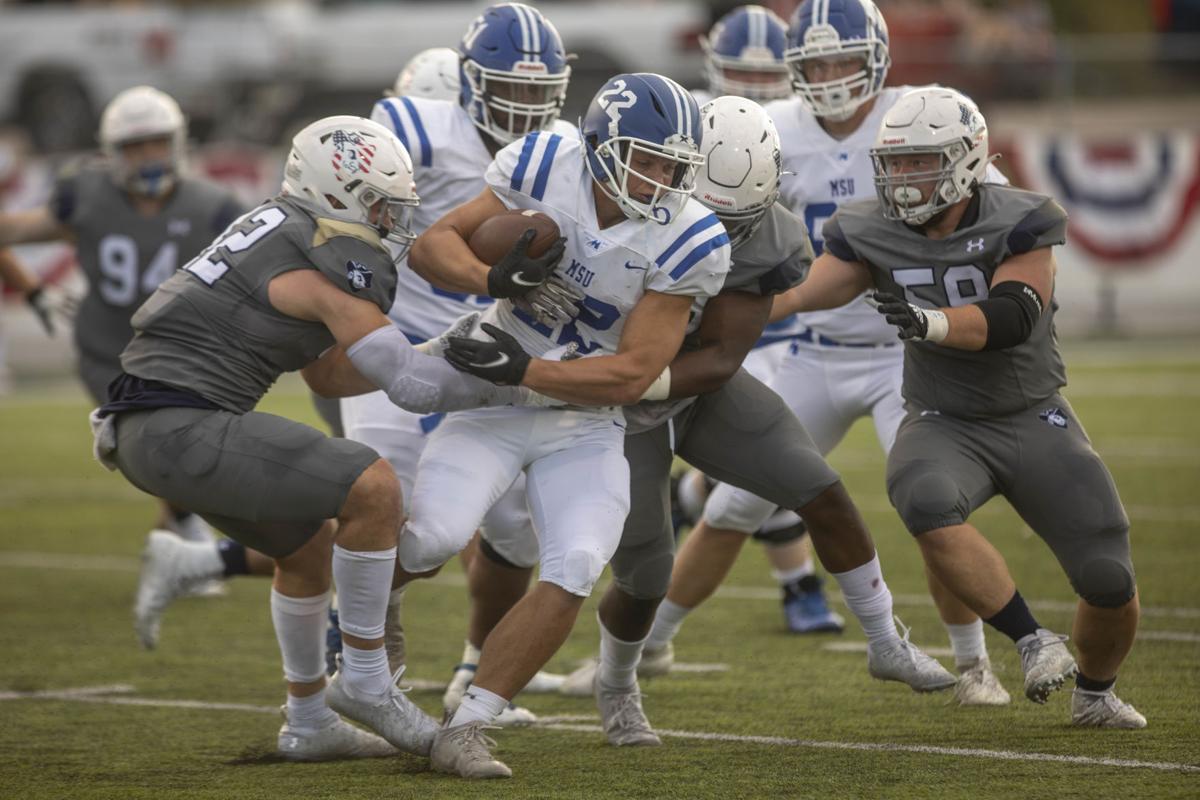 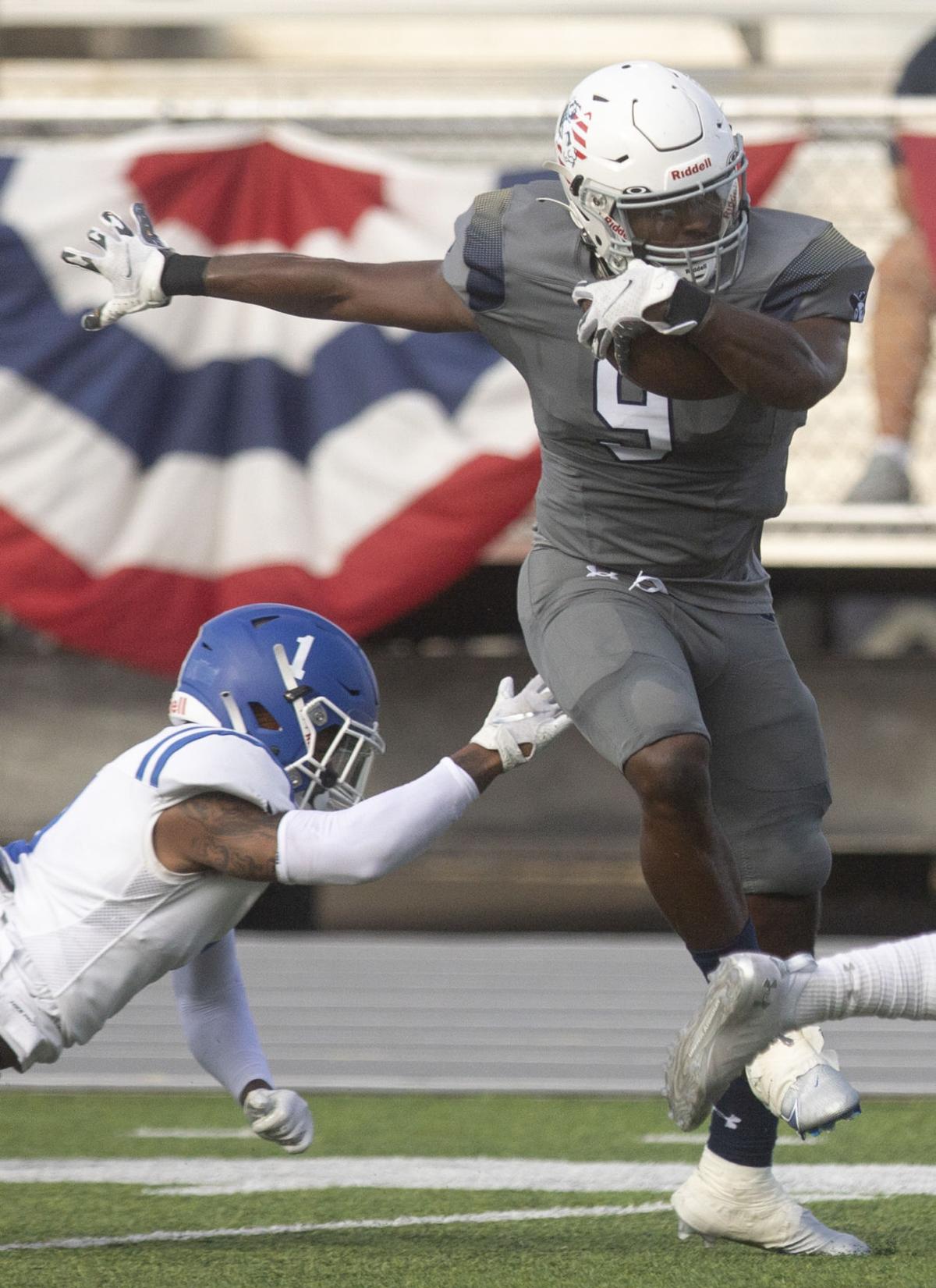 South Dakota Mines senior Ahmad Lewis runs into the end zone for a touchdown on Saturday at O'Harra Stadium in Rapid City. 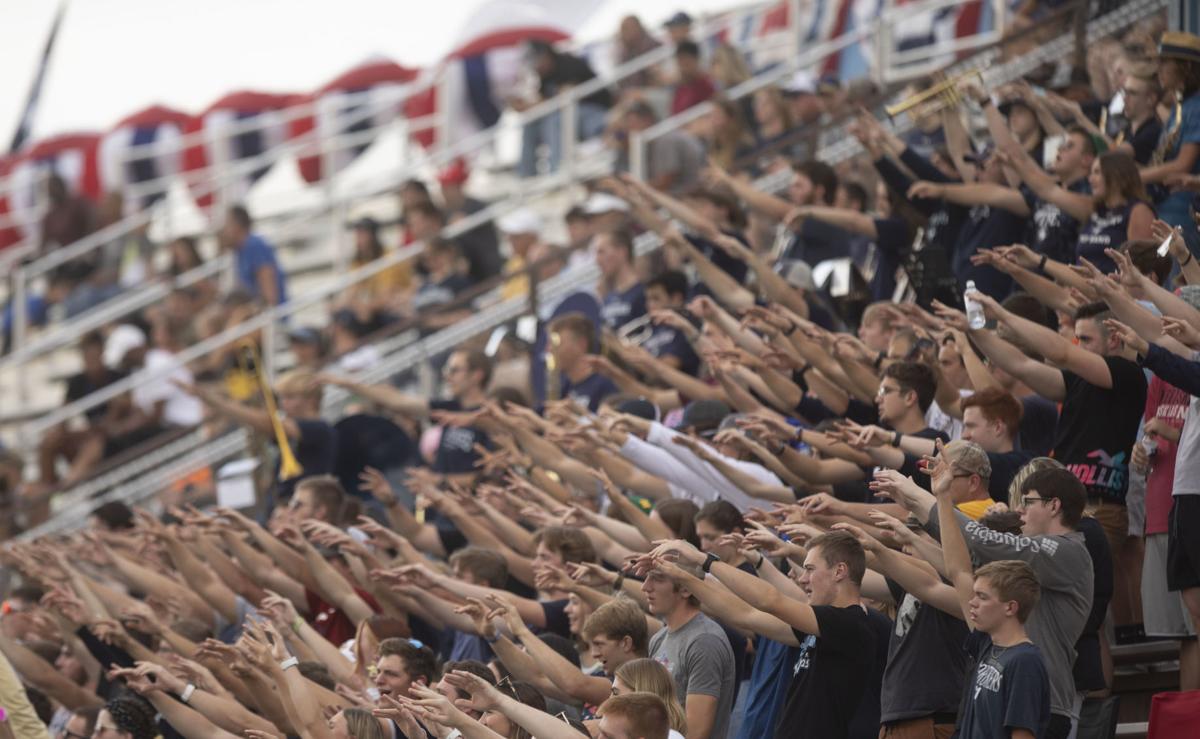 South Dakota Mines fans hold up their hands during kick off on Saturday at O'Harra Stadium in Rapid City. 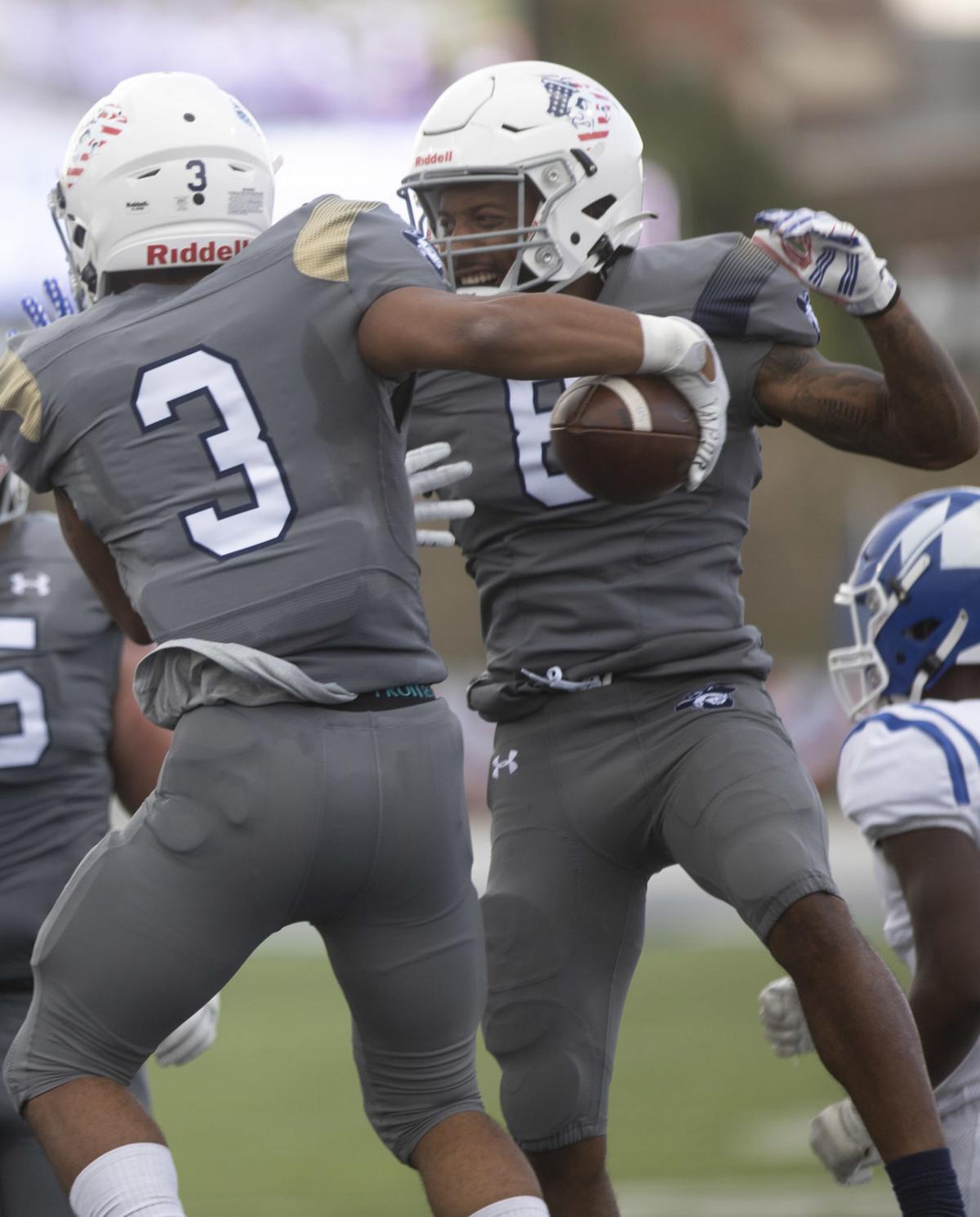 Don't blame Mayville State quarterback Gavin Goulette if he hears footsteps for a couple of days.

He likely wished he would have Saturday as he was nailed twice by South Dakota Mines junior linebacker Gavin Chaddock from the blindside and lost the ball both times on fumbles in the first half. He lost 65 yards on the two hits and two more sacks by Otutoa Afu.

The Mines defense was all over the Comets, especially in the first half when they led 45-0 en route to a 52-7 win at O'Harra Stadium.

The Hardrockers came out on fire against the former Dac-10 foe Mayville State, a NAIA program, scoring two touchdowns in the first three minutes and leading 31-0 at the end of the first quarter.

While the Mines offense was efficient for much of the game, the defense was dominant, not allowing a first down until early in the fourth quarter, and the only Comet score on that same drive against Hardrocker reserves.

"We knew we had to come out and start the game fast," Mines head coach Charlie Flohr said. "They were a lesser of an opponent than we saw last week and that was one of the main reasons we wanted to start out fast ... get our offense some momentum, keep their offense off the field. I was very proud of our kids and how they started the game."

Mines won the coin toss and elected to receive the opening kick, and didn't waste any time in getting on the scoreboard, marching 75 yards on seven plays, scoring on a 1-yard TD run by Ahmad Lewis. The Hardrockers had four plays of 10 or more yards on the drive, including a 25-yard pass from Jayden Johannsen to Collin Zur.

Chaddock got the first of his two forced fumbles when he blasted Goulette from behind, with Justin Broekemaier recovering the fumble. One play later Lewis scampered in from 8 yards out on a pass from Johannsen for a quick 14-0 lead, just three minutes into the game.

"It was awesome. We had a good game plan going into it and they just didn't want to block me, so I just took advantage of it. I used my speed and made a couple of plays," Chaddock said. "It's definitely a weird feeling. You expect someone to block you and it is wide-open green. You have to take advantage of those plays and those opportunities will fall out."

Chaddock didn't need to use his brawn on the next possession, but stepped in front of a Goulette pass on the 35-yard line, and the Hardrockers took advantage and drove 30 yards on five plays, scoring on a 2-yard TD run by Orlando Westbrook-Sanchez III.

"On that play, I didn't have any responsibility, I was just a robber," Chaddock said. "I saw the guy come out and he was getting covered, and the quarterback was not looking at me so I just stepped up and made the play. I should have taken it to the house, but my running back vision was a little off. I'm going to have to work on that."

After a three-and-out by Mayville State, Mines made it 24-0 on a 29-yard field goal by Connor Taylor with 3:29 remaining in the first period.

The Hardrockers got an interception by Kendahl Johnson — his second of the season — and they went 21 yards on four plays when Johannsen hit Isaiah Easton from 6 yards out to make it 31-0, still with a minute remaining in the opening quarter.

"We just knew that we came into the game that it was all on us with our execution, our alignments and our assignments," said Collin Zur, who had three catches for 90 yards. "If we took care of that, the scoreboard would take care of itself. We attacked the game with that kind of mindset and getting out to an early lead. We try to capitalize every time we have the ball, especially when we get it inside the red zone. When you get it in that spot on the field, you have to have that will to go in and score."

There was a lull in the scoring for the Hardrockers before Spencer Zur came in at quarterback and hit his brother, Collin, on a 41-yard TD pass for a 38-0 lead with 5:54 remaining in the first half.

Collin Zur said it is always special to play football with his brother.

"We’ve played football together since third grade," he said. "I just enjoy playing with him so much. Obviously we are on the same page because he has been throwing to me for all of these years. On that touchdown, he put it where I could catch it, away from the DB, and I did the rest."

Mines added one more score in the first half on a 2-yard TD run by Lewis — his third of the first half — to make it 45-0. The score was set up when the Mayville State punter couldn't handle the snap and was tackled on the 7-yard line.

With Mines now basically going with reserves, Mayville State not only got its first first down of the game early in the fourth quarter but its lone score, when Goulette hit a wide open Donte McJoy on a 34-yard TD pass.

"I told them that if they score, that's fine, as long we're going hard and executing the best that we can, then I'll take plays like that," Flohr said of his reserves on defense.

Mines came right back and got its only score of the second half on a 5-yard touchdown run by Kaleb Roth with 7:21 to play. Roth had runs of 13 and 14 yards on the drive.

Goulette was just 4-of-13 passing for 65 yards, the one TD and three interceptions. With the sacks, the Comets, 0-3, had 13 total yards rushing. Mason Ollman had 35 yards on the ground on 18 carries.

Mines had six tackles for losses in the contest. Cooper Fargen led the way with seven tackles, while Jarrett Meyer and Hunter Newsome had five tackles each.

"We stuck together and we fought for 60 minutes and played a great all-around game," Chaddock said. "We focused on the run and the pass and everyone balled out. Even when our backups went in they balled out. It is just the preparation we put in each week, the film, studying, looking at formations and play rec."

While Lewis had the three touchdown runs, he ran the ball just eight times for 38 yards. Westbrook-Sanchez III led the way with 75 yards on nine carries and Roth added 73 yards on 10 carries. As a team, the 'Rockers had 289 yards for 40 rushes.

"It encourages us and it increases our energy to go out there and score," Collin Zur said. "We play off of each other. Defense will have a great stop and we'll go out and have a great drive. If one side of the ball is having a rough time, the other side needs to go out and pick it up. As much as it is offense, defense, special teams, we approach it as a team game, all three phases."

"It's the conference opener and it is a rivalry game," Flohr said. "Coach (Jay) Long is going to have that team ready to go. It has been a competitive game for the last four or five years. We're expecting our kids to go down and play hard for a full 60 minutes."

Navy ship is treated to a light show from Mother Nature

Navy ship is treated to a light show from Mother Nature

South Dakota Mines freshman Orlando Westbrook-Sanchez III runs into the end zone for a touchdown on Saturday at O'Harra Stadium in Rapid City.

South Dakota Mines senior Ahmad Lewis runs into the end zone for a touchdown on Saturday at O'Harra Stadium in Rapid City.

South Dakota Mines fans hold up their hands during kick off on Saturday at O'Harra Stadium in Rapid City.