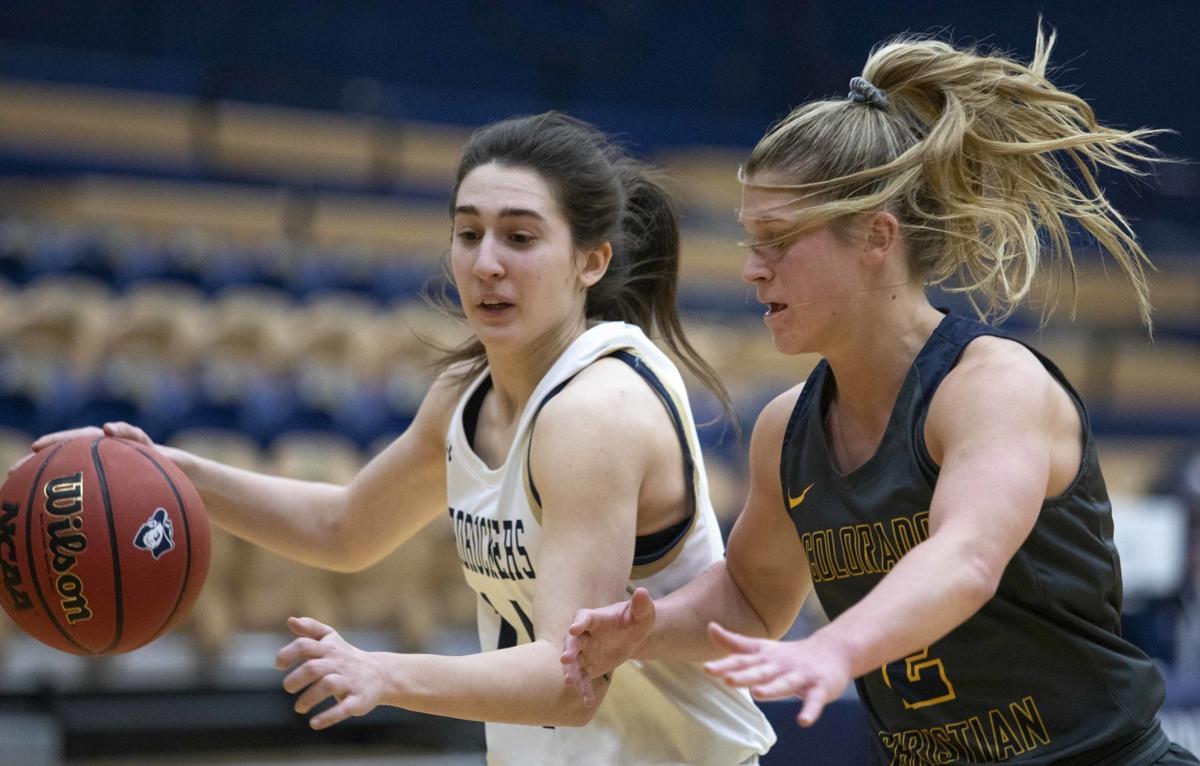 Anna Combalia of South Dakota Mines dribbles down the court as Colorado Christian University's Olivia Christy guards her on Saturday at Goodell Gymnasium. 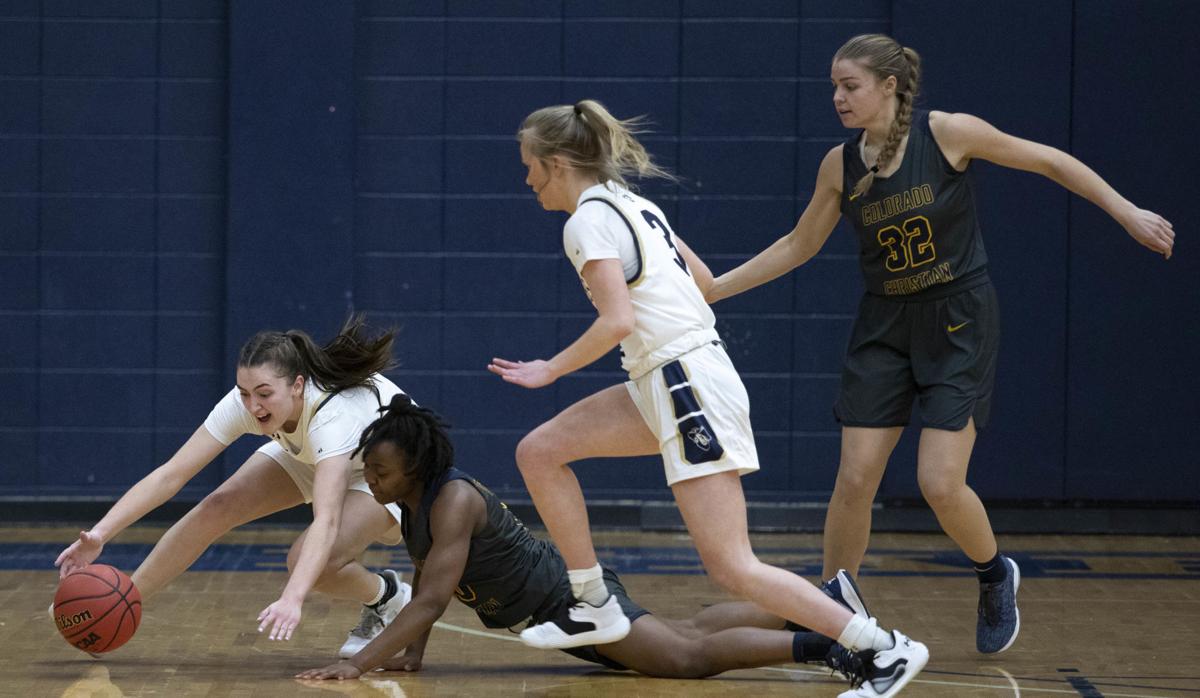 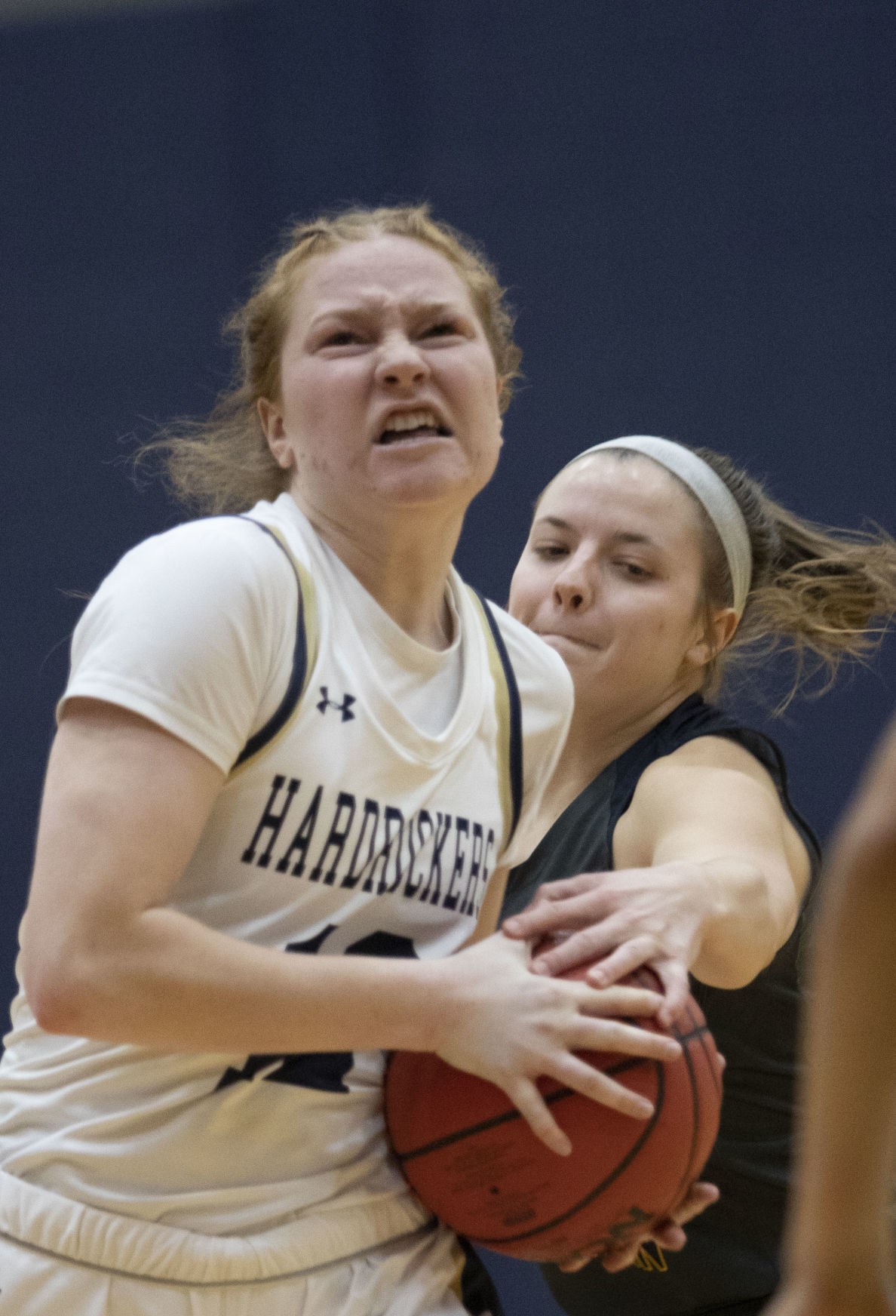 Ryan Weiss (left) pulls up for a layup around a block by Colorado Christian University's McClain Walker on Saturday at South Dakota Mines. 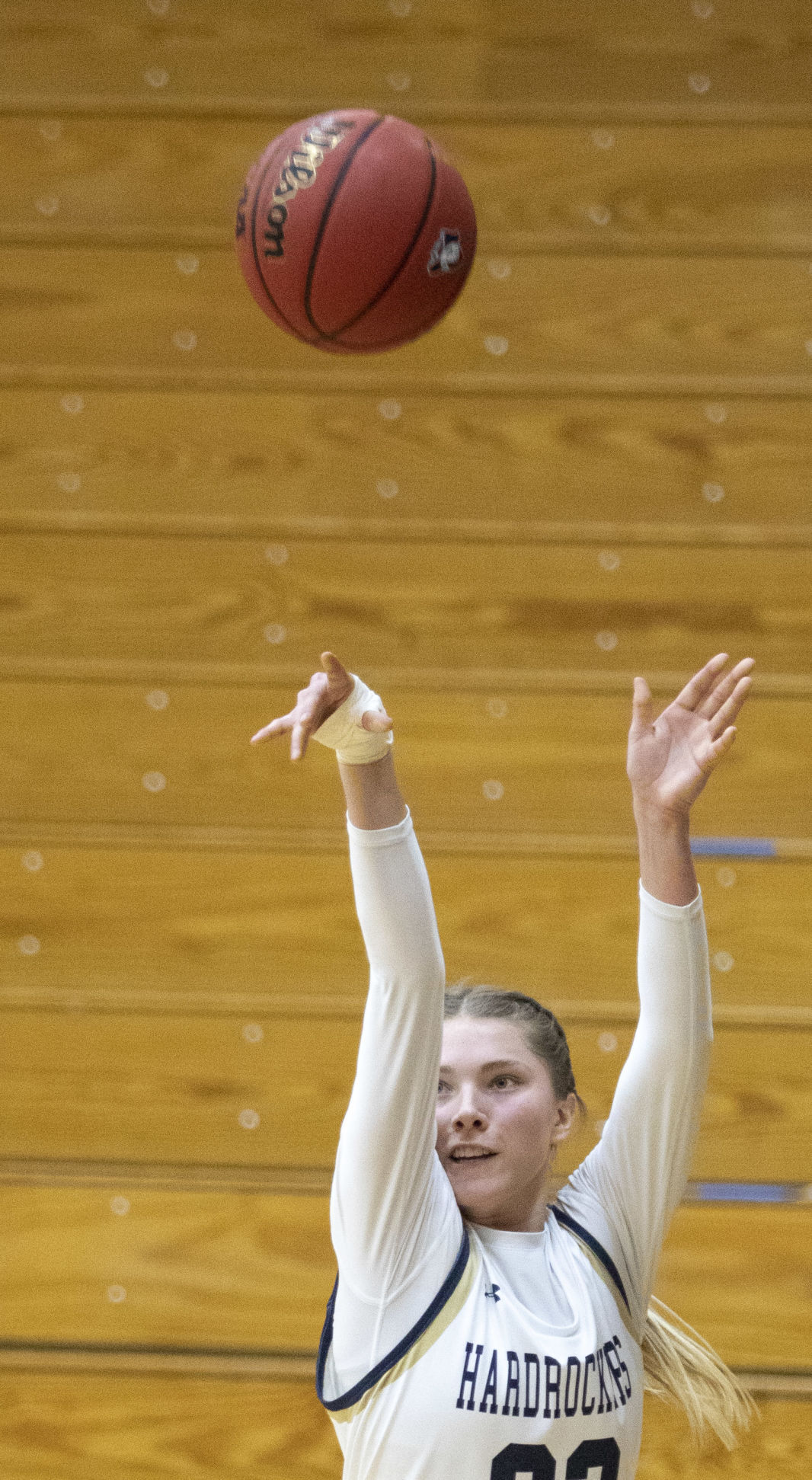 Juneau Jones jumps up for a 3-pointer on Saturday at South Dakota Mines.

The South Dakota Mines women’s basketball team did what it needed to do against a struggling Colorado Christian team, running past the Cougars 71-41 Saturday afternoon to close a five-game home stand at Goodell Gymnasium.

Mines never trailed against the Cougars, who are now 2-11 on the season, and led by as much as 34 points in the second half. The Hardrockers are now 9-6 in the Rocky Mountain Athletic Conference play and 9-7 overall.

Mines head coach Jeri Jacobson said the Cougars have been hit with some injury problems, and one of their top players, Lourdes Gonzalez, was just back after missing time since the Christmas break. Still, she said they did what they needed to do.

The Hardrockers couldn't have asked for a better start leading 11-2 at the end of the first quarter and 21-3 midway through the second. At that point, the Mines defense held the Cougars to 3.7% shooting from the field (1-of-27).

“We did have some breakdowns, but for the most part we did a great job of communicating and getting contests on the better shots, and that is the biggest thing that we stress, we don’t want anybody getting wide open shots,” Jacobson said. “We did that throughout the whole game pretty consistently."

Colorado Christian finally began to warm up, but the Hardrockers still led comfortably 31-14 at the halftime break.

Mines continued where it left off offensively to open the third, leading 45-23 with Bailey Johnson and Ryan Weiss both hitting two 3-pointers.

The Hardrockers took a 52-28 lead into the fourth quarter and led by as much as 34 on four straight points by freshman Sydnee Durtsche.

Johnson led the Hardrockers with 17 points, all but two points from beyond the 3-point arc as she hit 5-of-7 3-pointers.

“It did feel good, but I couldn’t have done it without my teammates, they were getting me the ball and I just knocked them down,” Johnson said.

Jacobson said the thing about Johnson is her consistency on defensively.

“She brings so much value to our team besides just scoring points,” Jacobson said. “Tonight it was nice to see. She is in the gym every single day working on her shot. It was nice to see that pay off and see her to hit the bottom of the net.”

Johnson, a Rapid City Central graduate, returned to the Black Hills with fellow Cobbler Juneau Jones after two years at Casper College. She is enjoying her return home.

“I love it. It’s too bad that my parents can’t come to the games, but it is really great playing back home, and I just love it here so much,” Johnson said

“I thought we really moved the ball well and took the stuff we talked about in practice and applied it to the game. That is always exciting to see,” Jacobson said.

Colorado Christian warmed up a bit after the horrendous start and hit 16-of-65 from the field for 24%, hitting just 1-of-18 3-pointers. Brookelyn Hurlkbut and Sam Nunez both scored 11 points.

“We really stress defense and shutting down their good players. The players that hit the most shots are averaging the most and we just focus on them and what their tendencies are and shut them down,” Johnson said.

Mines now hit the road, albeit for two short trips against its rivals – at Black Hills State Thursday and Chadron State Saturday.

Jacobson said it should be a good week for the players and the fans.

"It is always fun and it will be fun to have fans again,” she said. “I know that is something our players are looking forward to. We talked today and I was like, 'there's no energy in the gym because it is so empty.' It will be fun to play in front of fans, and they will be able to play in front of their parents and we'll get back to rivalry week."

The Hardrockers beat both Black Hills State and Chadron State the first time around at Goodell Gymnasium.

“We’re excited for it, getting BH again at their home and Chadron. We have to just keeping playing tough D and shutting down their good players, and it will just come naturally,” Johnson said.

Highlights from the 2021 Golden Globes

Highlights from the 2021 Golden Globes

Anna Combalia of South Dakota Mines dribbles down the court as Colorado Christian University's Olivia Christy guards her on Saturday at Goodell Gymnasium.

Ryan Weiss (left) pulls up for a layup around a block by Colorado Christian University's McClain Walker on Saturday at South Dakota Mines.

Juneau Jones jumps up for a 3-pointer on Saturday at South Dakota Mines.