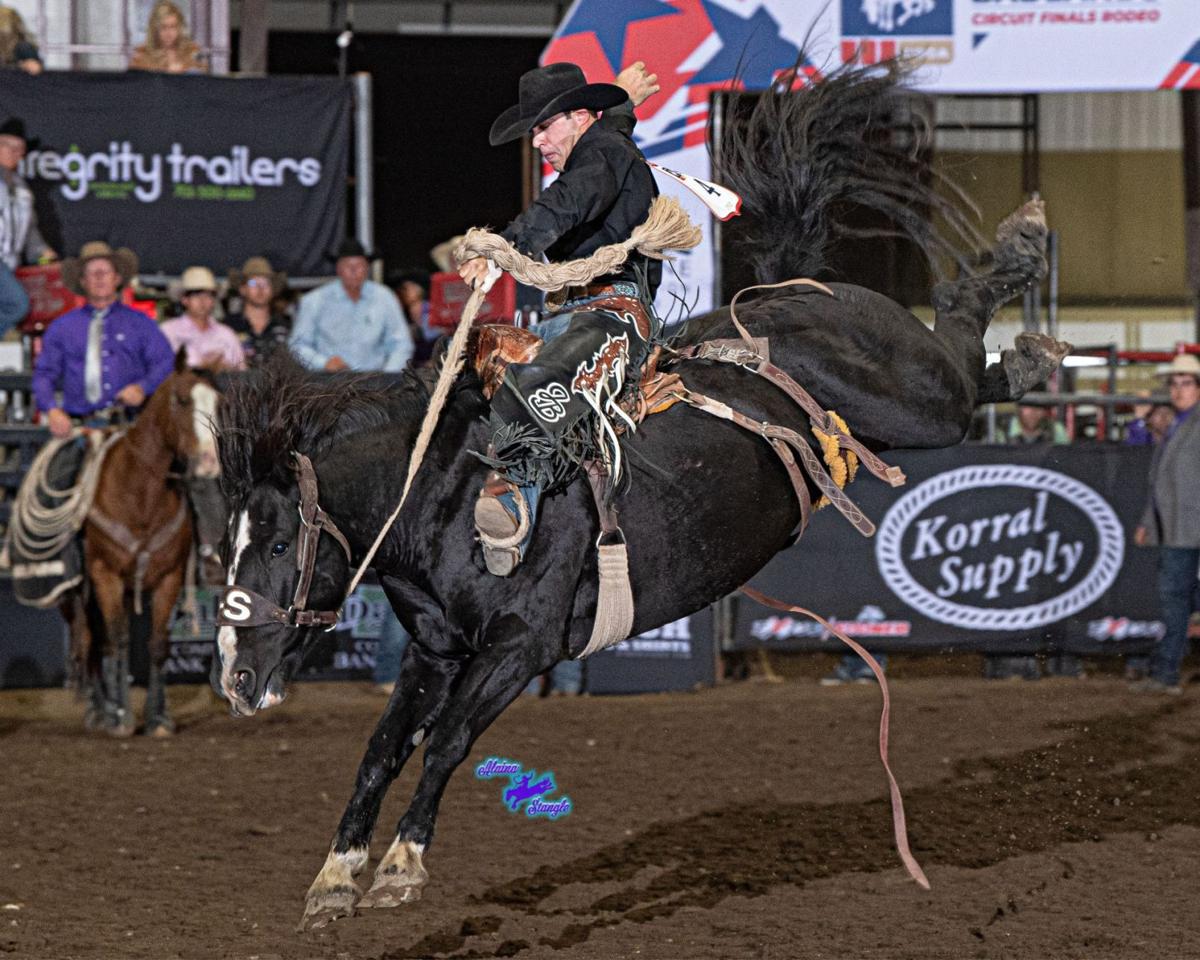 Jade Blackwell, Rapid City, wins the Badlands saddle bronc year-end title. This is his first year-end win. He won the average title in 2018. 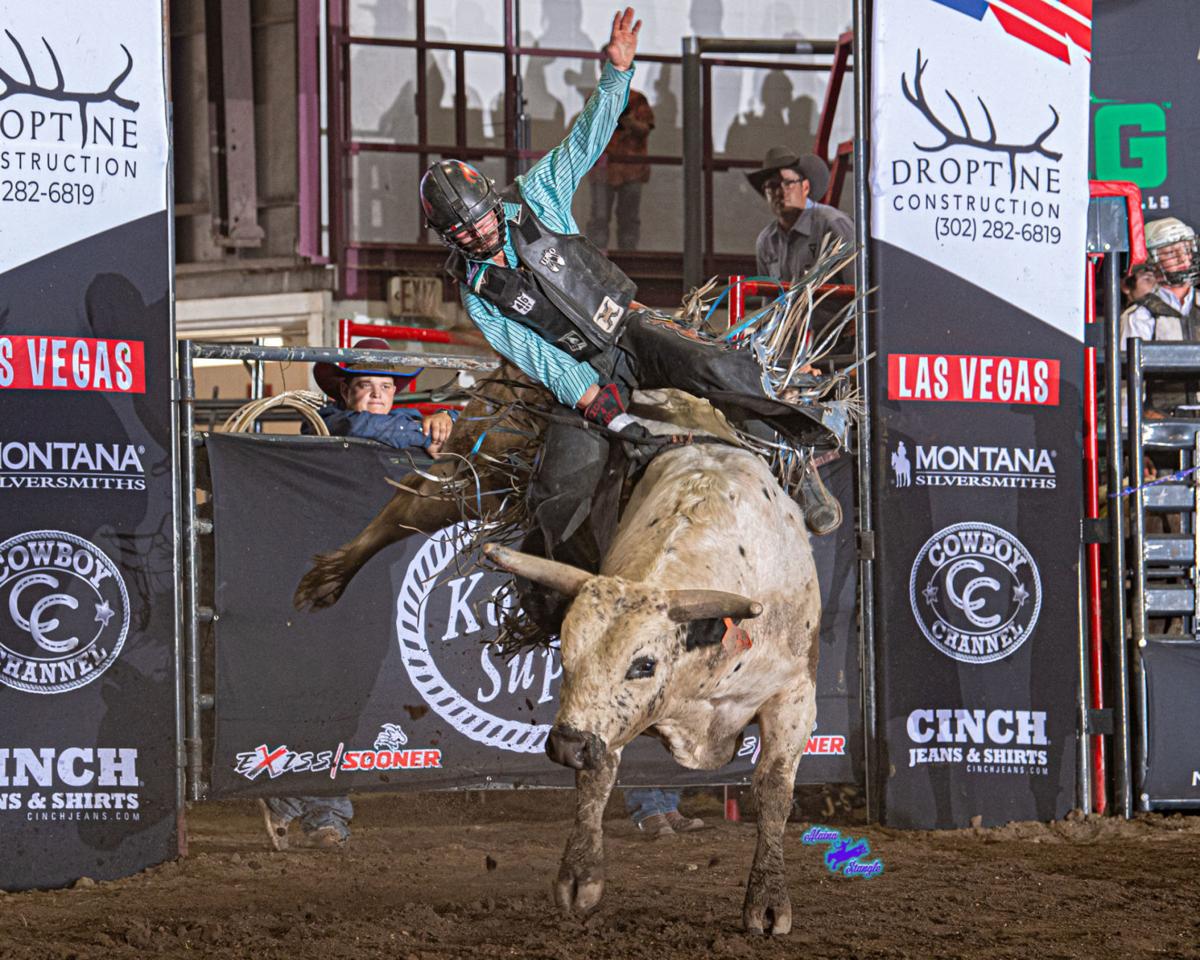 Chance Schott, McLaughlin, is the 2021 Badlands year-end bull riding champion. He, along with the other champions, will represent the Badlands Circuit at the National Circuit Finals Rodeo in 2022. 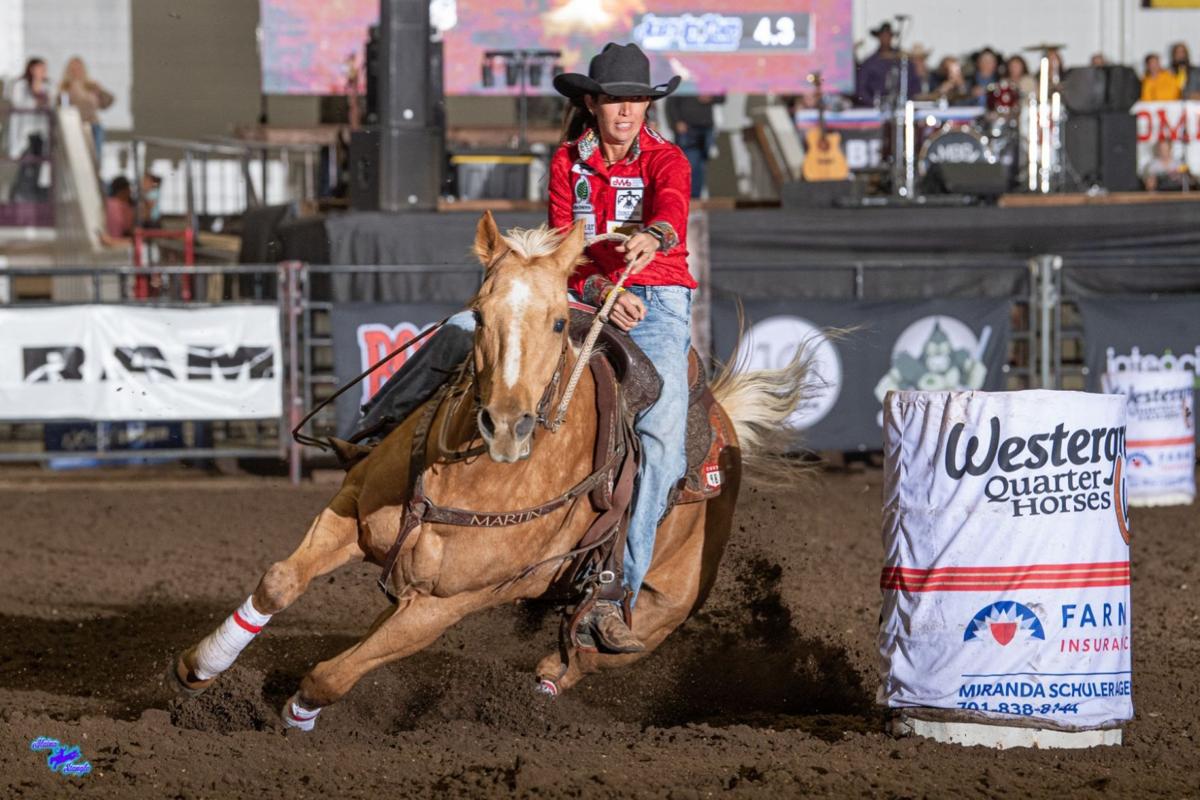 Two sisters came into the finals sitting first and second in the breakaway roping, but when it was over, only one was still at the top.

Rickie and Taylor Engesser of Spearfish came into Sunday’s round in first and second place, respectively, but things didn’t go smoothly for either cowgirl in the round.

Rickie, the younger of the two, broke the barrier, adding a ten second penalty to her time.

“I didn’t do my job,” she said. “I got antsy in the box, and I broke the barrier.” And Taylor didn’t fare well, either, drawing a tough calf to rope and recording a no-time.

Even with Rickie’s 10-second penalty on Sunday, she won enough through the regular season to finish as year-end champion.

The sisters traveled together all summer and enjoyed competing at the same rodeos.

“It’s a pretty big blessing to make it (to circuit finals) for both of us,” Rickie said. “We’re competing against each other, but we’re each other’s biggest supporters.

“I wanted her to win (the year-end title) just as bad as she wanted me to win it. Ideally, it would have been really cool if we had tied. She’s my biggest fan and my biggest blessing.”

The average title, the fastest combined times through the 3 rounds, went to Sawyer Gilbert of Buffalo.

Gilbert, who is 19 years old, roped three calves in a combined time of 8.7 seconds to win the average championship.

She had a business plan for this year, her second qualification to the Badlands Circuit Finals.

“I was riding my good paint horse, and wanted to take care of business," she said. "I knew if I got them roped in all three rounds, they’d probably pay me for it. That was my game plan.”

Gilbert is also ranked second in the world standings and on her way to a qualification for the National Finals Breakaway Roping, the Women’s Pro Rodeo Association world event in December. But it hasn’t gone to her head.

“You attack it one day at a time. It’s a run at a time. At the end of the day, it all comes down to one calf," she said.

She’s won more than $50,000 in the world standings this year, which has swayed her to quit college and rodeo full time.

“I didn’t go back (to college) this year because I wanted to be a breakaway roper,” she laughed, and she probably won’t return. “I know my mom wants me to, but she’s having a hard time arguing about it now.”

Ty Breuer, Mandan, N.D., rode three horses for a combined total of 250 points to sweep the average, and finish the season with more than $21,000 in earnings.

He had the year-end title sewn up before circuit finals even began, but the win is still special. “It always feels good to get a win here,” he said.

Breuer has won either the year-end or average title a total of seven times, from 2014-2018. He hasn’t missed qualifying for a circuit finals since 2009, except for last year, due to a bicep injury.

The 31-year-old has also competed at the National Finals Rodeo, pro rodeo’s world championship, five times and finished as high as thirteenth in the world standings in 2017.

In the bull riding, Chance Schott repeated as the year-end titlist for the circuit.

Even though the McLaughlin man only made two out of three qualified rides, he won enough money to earn year-end accolades.

“I had a couple of good Sutton (Rodeo Co.) bulls, and I wasn’t able to capitalize on them” in rounds one and two, he said. “But I was able to clear my mind and pull it all together today.”

Schott, who finished the year in the top twenty-five in the world standings, was the 2020 year-end and average titlist.

“This (buckle) is pretty special,” he said. “The first one holds a special place in my heart, but I still really like this one, just as much.”

Out of the field of 12 bull riders, only three were able to made qualified rides on two bulls; no one covered all three bulls.

The Badlands Rookie of the Year award went to Riley Curuchet, Kaycee, Wyo.; the Badlands All-Around was won by Riley Wakefield, O’Neill, Neb.

Deadwood, S.D.’s Days of ’76 rodeo won the title of Badlands Circuit Rodeo Committee of the Year.

Jade Blackwell, Rapid City, wins the Badlands saddle bronc year-end title. This is his first year-end win. He won the average title in 2018.

Chance Schott, McLaughlin, is the 2021 Badlands year-end bull riding champion. He, along with the other champions, will represent the Badlands Circuit at the National Circuit Finals Rodeo in 2022.