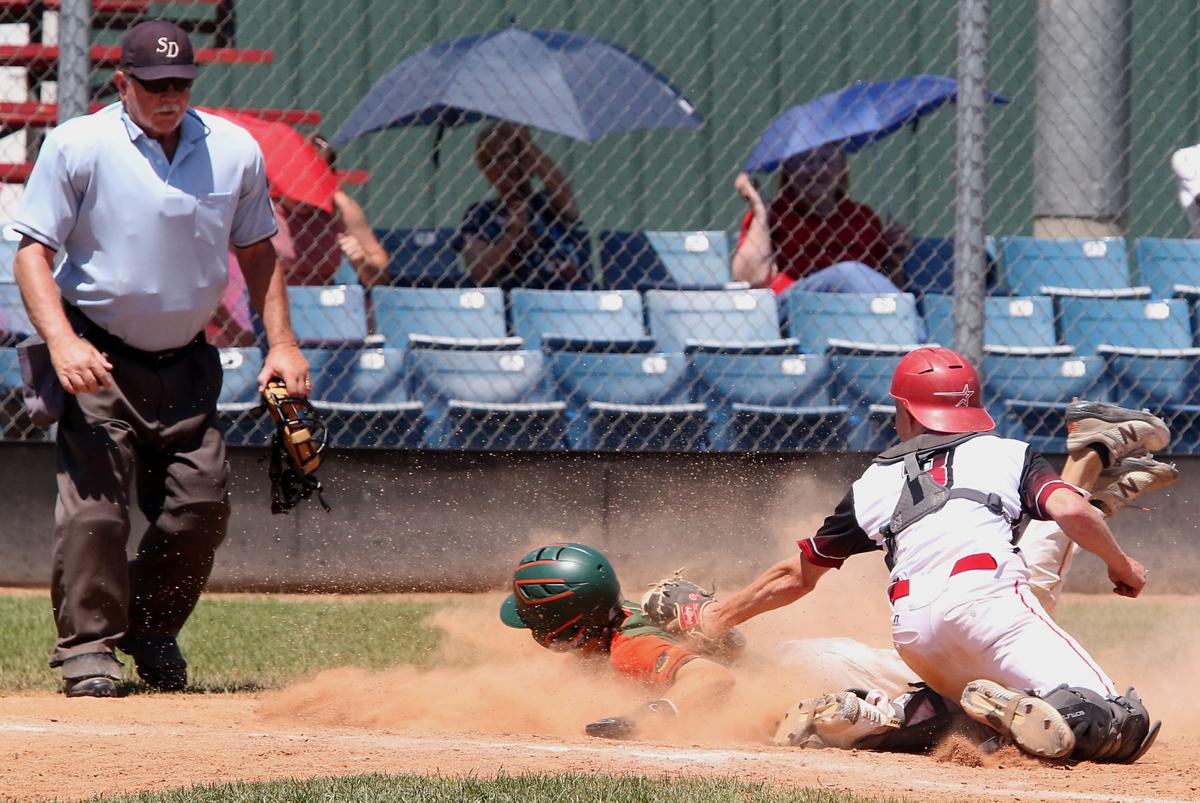 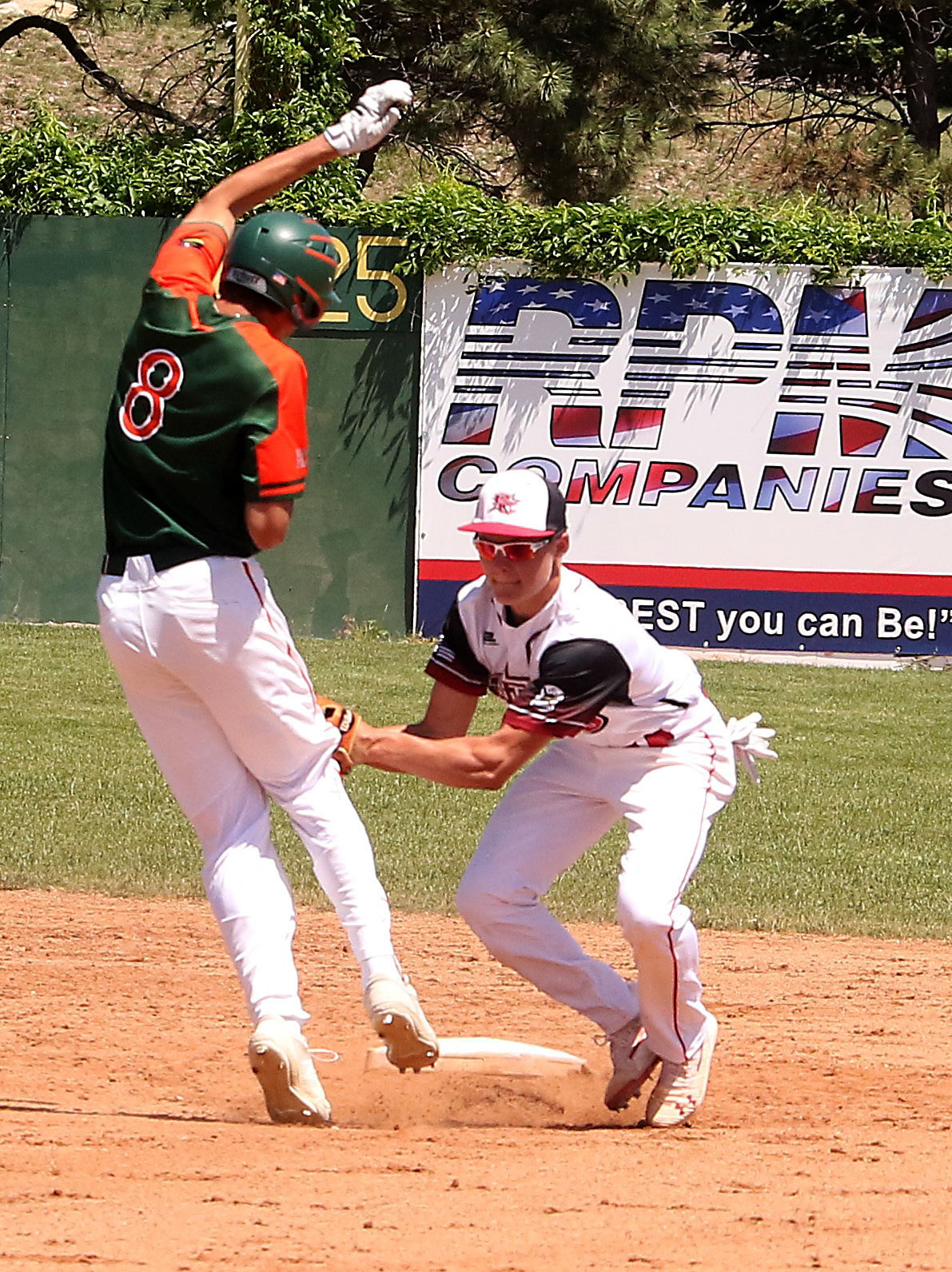 Post 320 shortstop Mason Melhaff comes across the bag to make a play on a grounder up the middle. Melhaff made the tag on a West Fargo base runner but couldn't complete the double play. 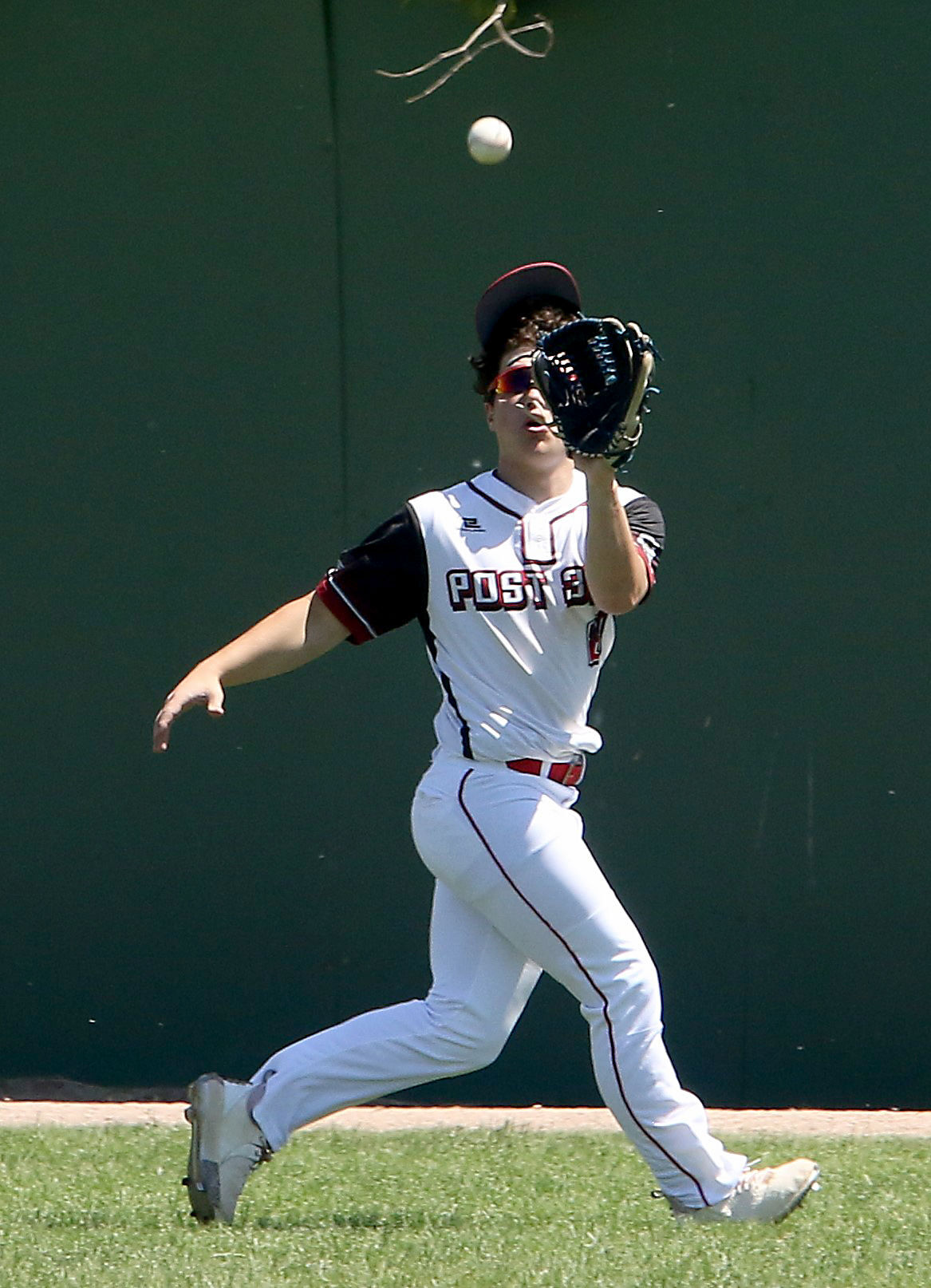 After a week off from competition, the Rapid City Post 320 Stars took a little while to get going offensively, and their early struggles defensively might have been the difference in a tough 9-6 loss to West Fargo, N.D., Monday afternoon at Pete Lien Memorial Field.

The Stars used a big five-run fifth inning after having no runs and one hit through four. Three early errors basically cost them three runs in the three-run defeat to a West Fargo team that is now 10-1 on the season.

"We did real well to come back and take the lead, but the biggest thing that has been the story for our entire year is the errors that cost us," Post 320 manager Brian Humphries said. "We gave up three errors and rather than it being 5-4 in that fifth inning, it could have been 5-1 if we just not had the errors earlier in the game that cost us three runs."

West Fargo took a 4-0 lead through four innings against Post 320 starter James Rogers, who pitched well and had a bit of bad luck at times.

The Patriots opened the game with a solo home run by leadoff hitter Brandon Jacobson in the top of the first. In the top of the third, West Fargo scored a pair of two-out runs when Anthony Villaueva's ground ball was misplayed by Stars third baseman Isaac Dike, scoring Jacobson. Lance Oster then scored on a throwing error by catcher Peyton Ness, making it 3-0.

West Fargo made it 4-0 in the fourth on a RBI double by Tyler Rued.

"It's not just an error and we strand him on base, it is an error that costs us two or three runs, and all of the sudden it is difficult to be able to come back against them," Humphries said. "You can't give a team three chances and they took advantage of it; they did a very good job of hitting the baseball."

After being shut down by West Fargo pitcher Skyler Hoard through four innings, the Hardhats found their offensive game in the fifth.

Post 320 loaded the bases with one out on a single by Ryan Rufledt and walks to Logan Miller and Dike. Mason Mehlhaff got the Stars on the board with a RBI single and Gage Darrow followed with a two-run single.

With two outs, Ness came through with a big two-run double to put Post 320 up for the first time, 5-4.

The Stars, however, couldn't quite hold off the Patriots, who won for the sixth time in seven games in their swing through Wyoming and South Dakota since Friday.

Post 320 looked as it would get out of a jam in the fifth with a double play, but Cooper Broachardt scored on a wild pitch by Rogers to tie the game at 5-5.

The Stars had two baserunners on in the bottom of the sixth on two walks, but couldn't get them home.

West Fargo regained the lead in the seventh with four runs on three hits, one walk and one hit-by pitch. With the bases loaded, the Patriots scored on a walk and hit-by-pitch by Rogers, a RBI sacrifice fly by Brennan Haman off of reliever Xander Dansby and a run-scoring single by Casey Clemenson.

The Hardhats got one run back in the bottom of the seventh but couldn't get any closer. Ness had a RBI ground out, scoring Gage Darrow, and after Jett Wetzler was hit by a pitch, Clemenson was able to get to Garret Grismer to ground out to end the game.

Post 320 had five hits by five different players, with Ness leading the way with three RBI and Gage Darrow two runs batted in.

Monday's game was the first in over a week for the Stars at Pete Lien Field as Post 320 hosted the Jim Scull Tournament Thursday through Sunday, some 60 games in the four days.

"We took a little time once we got through the first time through the (batting) order," Humphries said. "We started to get our timing a little better."

Rogers took the loss, giving up nine runs (six earned) on nine hits in six innings, with Dansby giving up one hit in one inning.

Jacobson led West Fargo with three hits and one RBI, while Oster and Broachardt added two hits each.

Hoard got the win, giving up five runs on five hits in 5 1/3 innings, with Quade Peters pitching 1 1/3 innings, yielding one run and Clemenson getting the final out.

Monday's contest was the final home game this season for the Stars.

"Now is the hardest part of our season with these tournaments," Humphries said. "We go to New Mexico on Friday. We have a big game at Sturgis and we play in Aberdeen on our way to the Gopher Classic (Minnesota). We have a good 20 games left and hopefully we are able to finish strong."

Post 320 shortstop Mason Melhaff comes across the bag to make a play on a grounder up the middle. Melhaff made the tag on a West Fargo base runner but couldn't complete the double play.