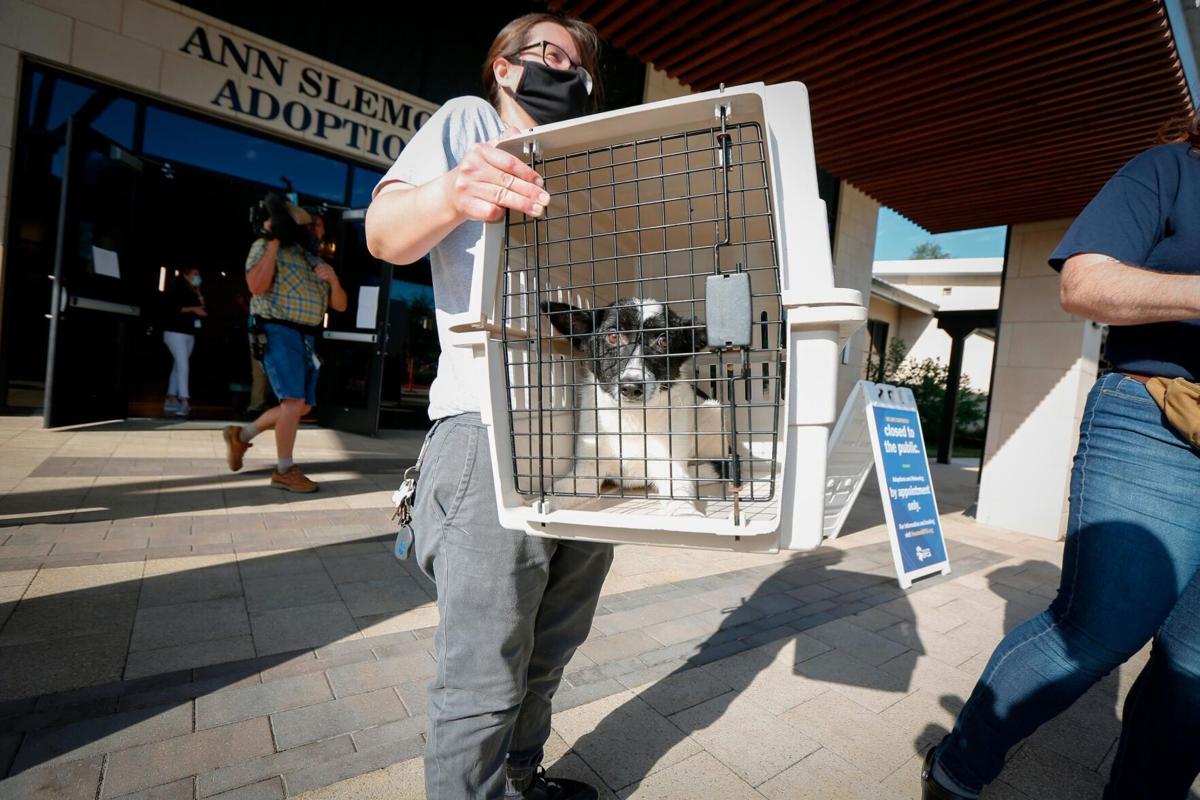 Katy Gay carries a dog as the Houston SPCA sent about 25 dogs and over 100 animals total to the Austin Humane Society as Hurricane Laura threatens the Texas coast. 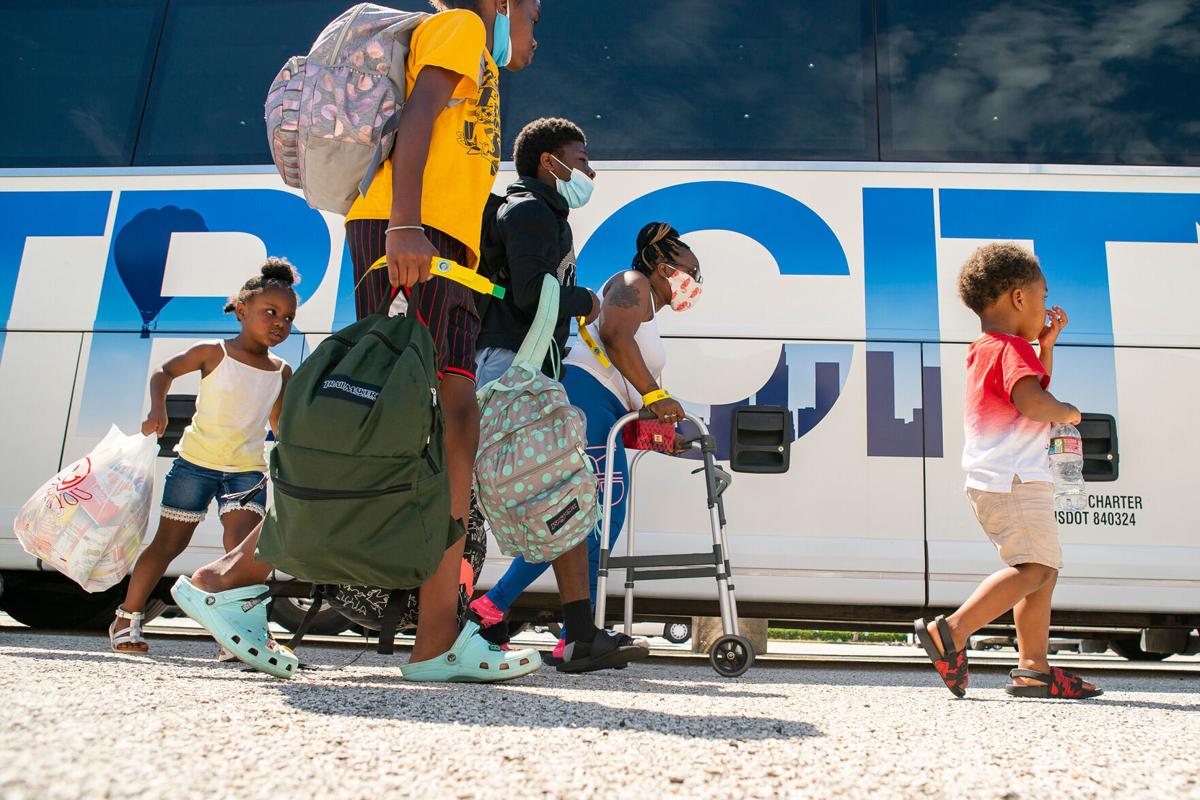 A family walks to a charter bus that will evacuate them from Galveston Island to Austin in anticipation of impact from Hurricane Laura on August 25, 2020, at the Galveston Housing Authority offices in Galveston.

Hurricane Laura has hit Category 3 strength over the Gulf of Mexico, hours before it is expected to bring potentially deadly flooding and ruinous damage to eastern Texas and Louisiana.

Laura was moving over the Gulf early Wednesday with maximum sustained winds of 115 mph -- the lower range of a Category 3 -- and it may strengthen to a Category 4 sometime before landfall late Wednesday or early Thursday.

Texas and Louisiana officials are urging people to get out of the storm's path, in part because Laura is expected to push enormous amounts of water -- storm surges of up to 15 feet -- over low land that is ill-equipped to handle it.

"Those barrier islands are not ... 15 feet high. The water will go right over the top. You must be gone," CNN meteorologist Chad Myers said.

Even when Laura was just at a tropical storm moving over the Caribbean, it killed at least nine people.

And with the Gulf Coast facing the storm next, officials are racing to prepare.

The American Red Cross has pre-positioned 700 workers and relief supplies in the area, the group said.

"We urge people along the Gulf Coast to get ready now; listen to the advice of local officials and evacuate immediately if asked," Greta Gustafson with the American Red Cross told CNN via email.

Mandatory evacuations were issued Tuesday for "at risk" areas of Chambers County, Texas, according to a County Emergency Management post on Facebook. Jasper and Hardin Counties, two smaller Texas counties, have issued mandatory orders as well.

"As Hurricane Laura approaches Texas, this waiver will ensure that Texans are able to evacuate efficiently ahead of the storm," Abbott said in a statement. "I urge Texans in the area to continue to take all necessary precautions as Hurricane Laura nears the coast and heed the guidance of local officials."

And shelters in Texas have been preparing for two threats -- stocking personal protective equipment, preparing for social distancing measures and making testing available for coronavirus while the state prepares for Hurricane Laura, Abbott said in a press conference.

'Prep now or get out now'

Laura may fluctuate in intensity Wednesday, but is expected to make landfall later Wednesday or early Thursday near the Texas-Louisiana state line as a Category 3 or higher, the National Hurricane Center said.

Destructive winds will be one of the big problems. A Category 3 landfall would mean winds above 110 mph near the storm's center -- strong enough to damage well-built homes and knock out power for days.

But the storm's eyewall isn't the only place to watch. "Hurricane-force winds ... are also expected to spread well inland into portions of eastern Texas and western Louisiana," the National Hurricane Center said.

Even before landfall, winds of tropical-storm force -- 39 mph and greater -- should reach the area of the Texas-Louisiana state line, perhaps by 2 p.m. CT, Myers said.

"After that, you can't do anything, You can't put boards up. You need to prep now, or get out now, if you are ... from probably Sabine Pass (the Texas-Louisiana state line) and off to the east," Myers said.

• 4 to 7 feet from Morgan City, Louisiana, to the mouth of the Mississippi River.

From Wednesday through Friday, Laura is expected to produce rainfall of 5 to 10 inches, with isolated maximum amounts of 15 inches, across parts of northwestern Gulf Coast.

Over the lower to middle Mississippi Valley, 2 to 4 inches of rainfall with isolated totals of 6 inches are expected, the National Hurricane Center said.

Laura's impending arrival comes as the Gulf Coast avoided a powerful storm in Marco, which significantly weakened before reaching the US.

Abbott noted that there were more evacuations announced than before Hurricane Harvey struck.

Houston is the largest city in the region. It is particularly vulnerable to flooding and could see big impacts from Laura. The concrete-filled city has notoriously poor drainage systems and a propensity to flood, such as during the overwhelming rainfall from Hurricane Harvey in 2017.

Mandatory evacuations in Jasper and Hardin Counties fall just north of Beaumont, Texas, which was hard-hit during Harvey.

Deaths in the Caribbean

At least nine people have died in the Caribbean, including several in the Dominican Republic and Haiti, due to Laura.

The victims include a 7-year-old boy who died along with his mother after a wall collapsed in their home in the Dominican Republic. Another person died after a tree fell on a house.

Five people were killed in Haiti, including a 10-year-old girl, the country's civil protection agency said.

CNN's Eric Levenson and Judson Jones contributed to this report.

Satellite images show Laura has become “a formidable hurricane." Get the latest here, including the storm's path, evacuation orders, photos and more.

Katy Gay carries a dog as the Houston SPCA sent about 25 dogs and over 100 animals total to the Austin Humane Society as Hurricane Laura threatens the Texas coast.

A family walks to a charter bus that will evacuate them from Galveston Island to Austin in anticipation of impact from Hurricane Laura on August 25, 2020, at the Galveston Housing Authority offices in Galveston.