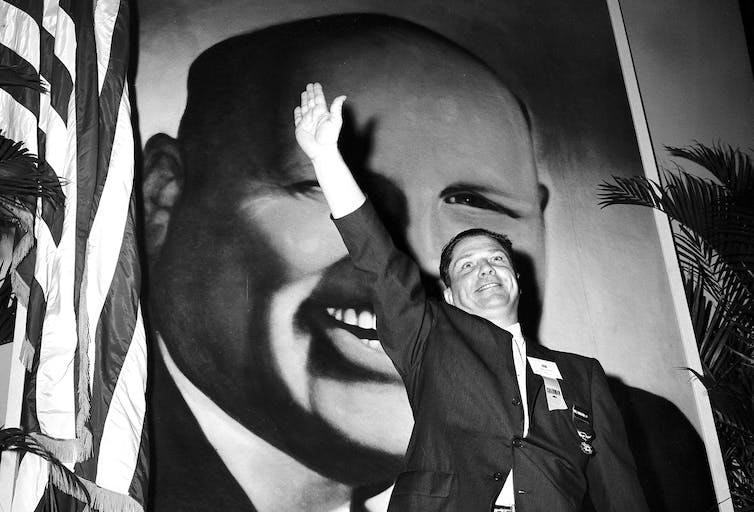 Jimmy Hoffa waves to delegates at the opening of the 1957 Teamsters Union convention in Miami Beach, Florida. AP Photo

On July 30, 1975, Jimmy Hoffa, the former president of the Teamsters Union, disappeared.

He’d gone to a restaurant in suburban Detroit apparently expecting to meet a couple of mafia figures whom he had known for decades. He’d hoped to win their support for his bid to return to the union’s presidency. A few customers remembered seeing him in the restaurant parking lot before 3 p.m.

Sometime after that he vanished without a trace.

The FBI has long assumed that Hoffa was the victim of a mob hit. But despite a decades-long investigation, no one has ever been charged with his murder. His body has never been found.

Yet even though his physical remains are missing, Hoffa lives on in our collective cultural consciousness.

He’s been the subject of countless true crime books, most famously Charles Brandt’s “I Heard You Paint Houses.” He inspired an episode of “The Simpsons.” And he crops up in tabloids such as the Weekly World News, which claimed to have found him living in Argentina, hiding from the vengeful Kennedys.

Ever since I started researching and writing on the history of the Teamsters, people have asked me where I think Hoffa’s body is located. His story, I’ve learned, is the one aspect of labor history with which nearly every American is familiar.

Hoffa’s disappearance transformed him from a controversial union leader into a mythic figure. Over time, I’ve come to realize that Hoffa’s resonance in our culture has important political implications for the labor movement today.

The rise and fall of the ‘Teamsters Teamster’

Hoffa became a household name in the late 1950s, when Robert F. Kennedy, then serving as chief counsel for the Senate Rackets Committee, publicly grilled him about his mob ties.

While other witnesses avoided answering questions by invoking their Fifth Amendment rights, Hoffa, the newly elected leader of the nation’s largest and most powerful union, adopted a defiant stance. He never denied having connections with organized crime figures; instead, he claimed these were the kinds of people he sometimes had to work with as he strengthened and grew his union in the face of employer opposition. He angrily dismissed any allegations of corruption and touted the gains his union had won for its membership. 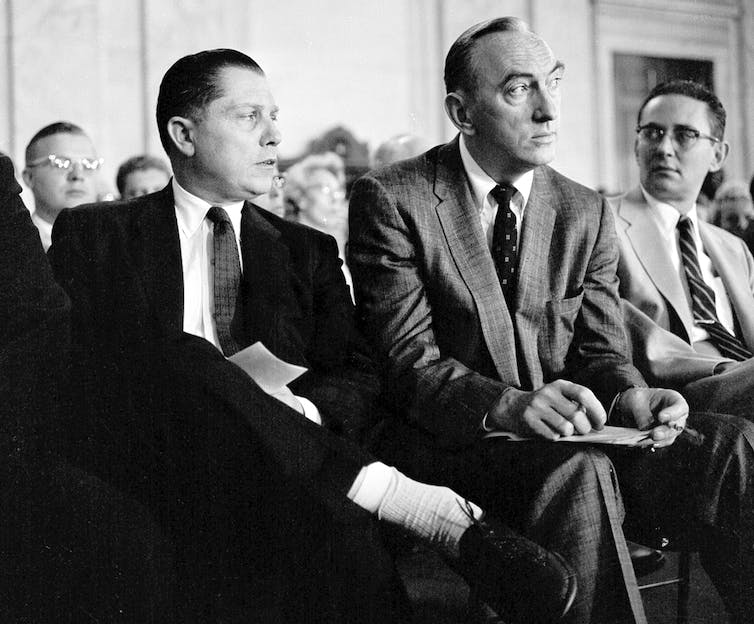 The verbal sparring between Kennedy and Hoffa became the most memorable part of the hearings.

To the benefit of big business, it turned Hoffa into a menacing symbol of labor racketeering.

But to his union members, it only enhanced his standing. They were already thrilled by the contracts Hoffa had negotiated that included better pay and working conditions. Now his members hailed him as their embattled champion and wore buttons proclaiming, “Hoffa, the Teamsters Teamster.”

His membership stayed loyal even as Hoffa became the target of a series of prosecution efforts.

After becoming attorney general in 1961, Kennedy created a unit within the Department of Justice whose attorneys referred to themselves as the “Get Hoffa Squad.” Their directive was to target Hoffa and his closest associates. The squad’s efforts culminated in convictions against Hoffa in 1964 for jury tampering and defrauding the union’s pension fund. Despite that setback, Hoffa’s hold on the Teamsters’ presidency remained firm even after he entered federal prison in 1967.

When he finally did leave office, Hoffa did so voluntarily. He resigned in 1971 as part of a deal to win executive clemency from the Nixon administration. There was one condition written into the president’s grant of clemency: He couldn’t run for a position in the union until 1980.

Once free, Hoffa claimed that his ban from union office was illegitimate and began planning to run for the Teamsters presidency. However, he faced resistance not from the government but from organized crime figures, who had found it easier to work with Hoffa’s successor, Frank Fitzsimmons.

Hoffa’s meeting at the restaurant on July 30, 1975, was part of his efforts to allay that opposition.

Some theorize that the mafia had him killed in order to ensure that he would not run against Fitzsimmons in the Teamsters’ upcoming 1976 union election.

But after no arrests and multiple fruitless excavations to try to locate his body, Hoffa’s case remains, to this day, unresolved. 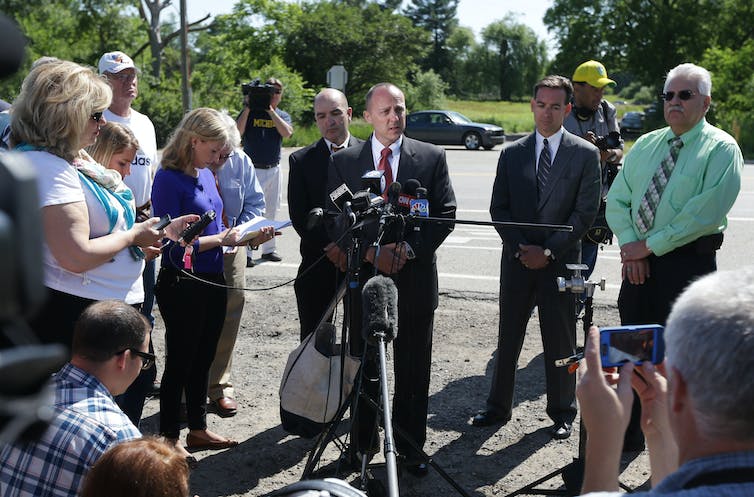 In this June 2013 photograph, Robert Foley of the FBI’s Detroit division announces that the FBI had come up empty after an excavation, based on a tip, to uncover Hoffa’s remains. AP Photo/Carlos Osorio

From man to myth

In Andrew Lawler’s history of the Lost Colony of Roanoke, he writes, “To die is tragic, but to go missing is to become a legend, a mystery.”

Stories are supposed to have a beginning, a middle and an end. But when people go missing and are never found, Lawler explains, they’ll endure as subjects of endless fascination. It allows their legacies to be re-written, over and over.

These new interpretations, Lawler observes, “can reveal something fresh about who we were, who we are, and who we want to be.”

The myth of Hoffa lives on, even though almost five decades have passed since that afternoon in July 1975.

What shapes has it taken?

To some, he stands for an idealized image of the working class – a man who’d known hard, manual labor and worked tirelessly to achieve his success. But even after rising to his leadership post, Hoffa lived simply and eschewed pretense.

As a Washington Post article from 1992 put it, “He wore white socks, and liked his beef cooked medium well… He snored at the opera.”

Meanwhile, his feud with the Kennedys pitted a populist “tough guy off the loading docks” against “the professional class, the governing class, the educated experts.” The Washington Post piece ties Hoffa’s story to that of another working-class icon. “Watching Hoffa go up against Bobby Kennedy was like watching John Henry go up against a steam hammer – it was only a matter of time before he lost.” 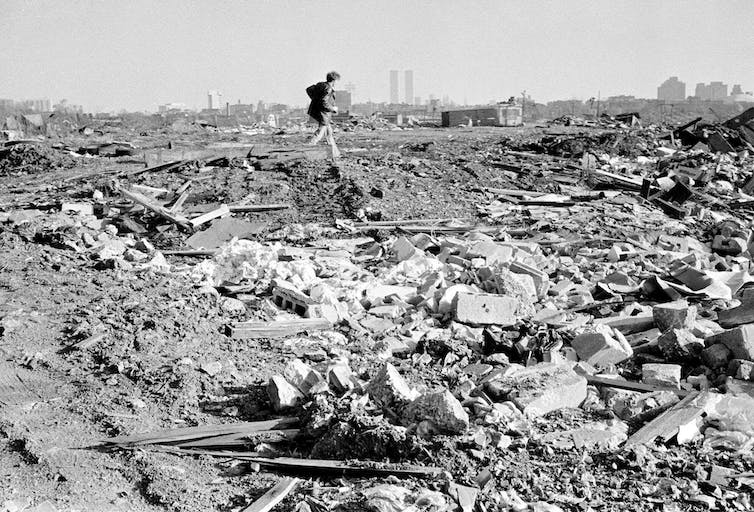 A man walks over rubble in Jersey City, N.J., one of the locations where authorities searched for the body of missing former Teamster boss Jimmy Hoffa. AP Photo

But Hoffa’s myth can also serve as a morality tale. The New Republic, for instance, described how Danny DeVito’s 1992 film reworks Hoffa’s life into the story of an “embattled champion of the working class” who makes “a Faustian pact with the underworld.”

In the movie, Hoffa’s Teamsters are caught in hopeless picket line battles with mob goons who the anti-union employers have hired. In order to get those goons to switch sides, Hoffa makes a bargain with mafia leaders. But the mafia ultimately has Hoffa killed when he tries to defy their control, becoming the victim of his own unbridled ambition.

Finally, the underworld’s mysterious role in Hoffa’s death keeps his story compelling for Americans who have a fascination with conspiracy theories. It supports the idea of an invisible cabal that secretly runs everything, and which can make even a famous labor leader disappear without a trace.

Hoffa’s story is often intertwined with theories about the Kennedy assassination that attribute the president’s murder to an organized crime conspiracy. Both Hoffa and Kennedy’s murders, in these accounts, highlight the underworld’s apparently unlimited power to protect its interests, with tentacles that extend into the government and law enforcement.

Did Hoffa taint the labor movement?

Over two decades after he went missing, a 1997 article in The Los Angeles Times noted that “No union in America conjures up more negative images than the Teamsters.”

This matters, because for most Americans who lack first-hand knowledge about organized labor, Hoffa is the only labor leader’s name they recognize. And as communications scholar William Puette has noted, “the Teamsters’ notoriety is such that for many people in this country the Teamsters Union is the labor movement.”

A union widely perceived as mobbed up – with a labor leader notorious for his Mafia ties – has come, in the minds of some Americans, to represent the entire labor movement. That perception, in turn, bolsters arguments against legislative reforms that would facilitate union organizing efforts.

The other themes in Hoffa’s myth have similar negative implications for labor. He represents a nostalgic, white, male identity that once existed in a seemingly lost world of manual work. That myth also implies that the unions that emerged in those olden times are no longer necessary.

This depiction doesn’t match reality. Today’s working class is diverse and employed in a broad spectrum of hard manual labor. Whether you’re working as a home health aide or in the gig economy, the need for union protection remains quite real.

But for those working-class Americans who see their society controlled by a hidden cabal of powerful, corrupt forces – like the puppet masters who supposedly had JFK and Hoffa killed – labor activism can appear quixotic.

For these reasons, the ghost of Jimmy Hoffa continues to haunt the labor movement today.

Deep knowledge, daily. Sign up for The Conversation’s newsletter.

Beware of falling iguanas! It's so cold in Florida they could fall out of trees

"Don't be surprised if you see iguanas falling from the trees tonight," tweeted the Miami National Weather Service office.

Portraits of Barack, Michelle Obama to go on national tour

The official portraits of Barack and Michelle Obama will go on a five-city national tour beginning in June 2021.

The president has made it a priority to roll back clean-water protections since his first weeks in office, calling the rules an unnecessary burden on businesses.

97,000 gallons spilled from tank at winery leak into California river

A tank door opened Wednesday, spilling a stream of wine into the Russian River.

A second confirmed U.S. infection of a new viral respiratory illness was reported in Illinois and up to 63 cases are suspected across the country, news agencies reported Friday.

The impeachment trial of President Trump quickly burst into a partisan fight. The Senate rejected a number of amendments to impeachment rules; votes and debate continued past midnight Eastern time.

Firefighter Springsteen reported to swear in. Then his dad and mom showed up.

Bruce Springsteen's son was sworn in this week as a firefighter with the Jersey City Fire Department: "We're very proud," said The Boss.

The impeachment trial of President Trump quickly burst into a partisan fight. The Senate rejected a number of amendments to impeachment rules; votes and debate continued past midnight Eastern time.