A white middle school teacher in Pflugerville, Texas, has been fired after telling his students his race “is the superior one.”

When a white Texas middle school teacher told his students in November 2022 that he was “ethnocentric” and thought his race was “superior,” he attempted to explain his position by arguing that he was hardly the only person who held such a view.

“Let me finish …” the teacher is seen telling his students on a now-viral video as they began to push back against his remarks. “I think everybody thinks that; they’re just not honest about it.”

The teacher in question has since been fired. His termination is hardly surprising given that he was captured on video making blatantly racist remarks in a public school classroom. But as we discovered while performing a study at a predominantly Black school with mostly white teachers, many of them — whether consciously or unconsciously — often harbor negative racial views and stereotypes about Black students and their families. The key difference is they verbalize those negative views in less obvious ways than the Texas teacher.

At the school we studied, the negative views were not isolated occurrences, but rather a part of a culture of coded racial stereotypes, which we argue encourages the disciplining of Black students at disproportionately higher rates. 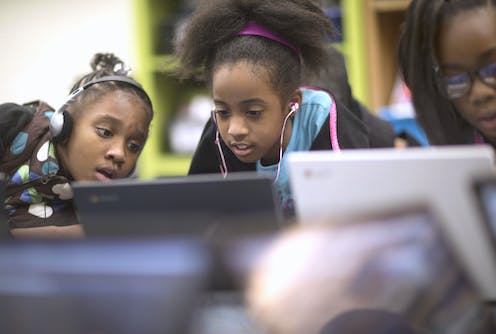 Our findings were published in a peer-reviewed study that appeared in Urban Education in 2022. They are based on a study that began in 2015 when administrators at a predominantly Black high school asked our research team for help understanding why the predominantly white teaching staff was struggling to form positive relationships with the students. In the first part of our partnership with the school, we found that while Black students made up 89% of the student body, they represented 97% of all disciplinary infractions. Conversely, while white students made up 8% of the student population, they received only 1% of the disciplinary referrals. This early quantitative finding confirms studies from across the nation that showed that, even when controlling for rates of misbehavior and poverty, Black students are still disproportionately disciplined compared to their white peers.

We are education researchers who specialize in cultural and racial justice issues. We believe our findings shine light on how often educators hold racial biases against the students they’ve been entrusted to teach.

The racial biases came to light as we conducted focus groups with teachers and students to ask them about their school’s culture and experiences with classroom discipline.

Of the teachers who participated in the focus groups, 84% were white. During focus group discussions, 36 out of 38 teachers voiced a stereotype at least once, though some did so up to 10 times. While some teachers pushed back against stereotypes they heard, and even more often acknowledged systemic racism in the lives of their students, the teachers still frequently used stereotypes when discussing their students and families.

In a series of focus groups, we asked educators from the school to reflect on their experiences in the school, interacting with students, and their thoughts on the school discipline practices. We were particularly interested in hearing their thoughts on the types of infractions for which students were disciplined and how specific punishments were decided on. For example, why were some students who disrupted class sent back from the office to the classroom immediately, but others received 10 days of in-school suspension?

The majority of the focus group questions were not focused on race explicitly. Even so, we still noticed an undercurrent of racially coded stereotypes as the teachers reflected on the statistical trends in school discipline and on their school culture as a whole.

For example, in one focus group, a white teacher notes that when the then-vice principal, a Black man, went to the school as a student, “we had a much more diverse student body. So, he had an opportunity to see different types of behavior. And I think a lot of these kids that we have, the chronic misbehaviors, they don’t have that option. They’re in a class, class by class where they’re all very similar socioeconomic background, and that really makes a difference, I think. Their parents are working and are unable to monitor them. Maybe they didn’t have such a successful high school experience, so they don’t have the tools that some of the other kids – we still have a few of them, fortunate to have a number in my classes.”

The teacher directly connects the presence of “chronic misbehaviors” with a change in the school’s demographics. The teacher opines that in the past, when the student body was nearly equally Black and white, that Black individuals, such as the then-vice principal, in his example, could observe better behavior in school. The teacher therefore communicates an anti-Black stereotype in a coded way, implying that Black students needed white students to “see different types of behavior.”

In a different example, two white teachers began talking about how parents at their school didn’t care about their children. At one point, they pretended to be parents, with one of the teachers even making a joke that one of the parents completely forgot they even had a child:

Nothing about this interaction is racially explicit. But the teacher’s joke invokes a stereotype of Black parents as disengaged from their children’s lives by using a stereotypical African American vernacular — “wooord.” When white teachers at a predominantly Black school make statements like these, they are upholding the stereotype that Black parents lack concern for their children — even if that is not the teachers’ intention.

A way of bonding

Using a theory that measures the speed of bonding, we found that when teachers used anti-Black stereotypes, they often bonded with each other more quickly and effectively. Certain types of communication — often ones that happen nonverbally — can help individuals bond with each other. These bonds then make individuals feel better about themselves and their community. In the data, teachers often used nonverbal communication or noises like “uh-huh,” laughter, and conversational rhythm, while stereotyping their students.

For example, in the “Hey, you know you have a baby, right?” joke, both teachers laughed as a result of the joke. Just as importantly, the rest of the teachers in the room also laughed. Laughter is an important display of bonding. In other interactions, teachers used verbalizations like “mhmmm” or “This is it” to support each other as they engaged in stereotyping their students.

Based on what social psychologist Russell Fazio has found, if teachers are given time to reflect on their potential biases, they have a better chance of removing those biases from their teaching. Through systematic and sustained professional learning, teachers can become aware of their implicit and explicit biases and how those biases may impact their behavior. This type of professional learning must be coupled with structural reforms to re-professionalize teaching to achieve lasting, anti-biasing results.

Since our study was completed, the educators, school and district have sought to revamp their disciplinary policies and school culture, including deep discussions about how their biases might affect how they discipline students. The school has begun to use restorative justice practices, an alternative approach to discipline that focuses on humanizing individuals and repairing harm after a wrong occurs. The school hired a full-time staff person to support restorative justice. According to the current principal, in the year following, suspensions dropped by 47% in one year and chronic absenteeism dropped by 7%.

Olivia Marcucci does not work for, consult, own shares in or receive funding from any company or organization that would benefit from this article, and has disclosed no relevant affiliations beyond their academic appointment.

This article is republished from The Conversation under a Creative Commons license.

What student loan forgiveness could mean for Black Americans

A white middle school teacher in Pflugerville, Texas, has been fired after telling his students his race “is the superior one.”