When the three stars of the game are announced at The Monument Ice Arena, players usually skate a few feet onto the ice, throw a t-shirt into the crowd and return to the tunnel.

Lukas Parik decided to soak in the moment and skate a full lap around the ice, pumping up the crowd after giving the performance of lifetime.

“It’s amazing, games like today when I can help my team as much as I can,” he said. “It feels great.”

The 21-year-old rookie netminder was flawless between the pipes Wednesday, turning away all 43 shots that came his way and recording a shutout victory as the Rush took Game 5 of the Mountain Division Finals series with a 3-0 win to stay alive in the Kelly Cup Playoffs.

“He was the best player on the ice,” Rapid City head coach Scott Burt said. “He is a different bird, and he was saving it for this game.”

After surrendering 15 goals in three previous games of the series, Parik had a turnaround performance no one saw coming.

“I just needed the trust from my whole team and my coaches, and sometimes that’s all you need. Just that trust,” said Parik, a Czech Republic native who fully embodied South Dakota by sporting a brown leather cowboy hat after the game. “It’s a whole team performance. It’s not just me. I could’ve seen 40 more shots had the guys not blocked them.”

As the series dragged into its third straight day, fatigue set in and the contest became a battle of tired legs as the Grizzlies (7-4-1) looked to close out the series for the second consecutive night and the Rush (6-3-1) aimed to stave off elimination once again.

Rapid City was drastically outshot, registering only 16 shots, but it capitalized on its chances in the first 40 minutes as Gabriel Chabot tallied two goals in the first period and Alec Butcher added an insurance marker in the second. Calder Brooks, Brett Gravelle, Logan Nelson, Avery Peterson and Callum Fryer spread the helpers around, collecting one assist apiece.

“The more (Parik) gains experience in the playoffs, the more it’s going to help his career, and tonight we needed him,” Burt said. “Our guys are tied, and you could tell. That wasn’t our team. I thought that was the worst game we’ve played all playoffs, but Lukas stood on his head for us.”

The series flips back over to West Valley City, Utah for the final two games of the series, slated for Monday and Tuesday. Only twice in the ECHL since 1989 has a team successfully overcome a 3-0 series hole. Burt was an assistant coach on the Idaho Steelheads team that did it in 2018.

“It drains you when you’re down three games to nothing and you have to fight back,” Burt said. “Every ounce of energy that you have, you have to give. Guys have to understand that and guys have been doing that the last two games.”

Chabot, who has played in every single game and taken every single shift of the season, including the postseason, got the Rush on the board at 7:45 of the opening frame when he buried a wrister from the point on a power play, directing a shot through traffic and beating the stick side of Grizzlies goalie Trent Miner, who missed Games 3 and 4 due to an AHL call-up.

Chabot doubled the lead at 17:18 of the first after his initial attempt on net was blocked by a defender. The 5-foot-8 second-year pro took a second-chance swipe at the puck and found the top-shelf, far side of the net while tumbling to the ice.

Butcher also showed some flash with his goal, finishing a wraparound stick-side and slipping the puck under the pads of Miner at 5:50 of the second period.

Despite their fatigue, the Rush were penalized only once, a holding call on Fryer in the middle frame they successfully killed off. The Grizzlies weren’t as disciplined, however, committing three penalties, highlighted by Austin Crossley’s fighting major midway through the third and subsequent ejection.

After a hard check into the boards by Colton Leiter, Crossley dropped the mitts and started throwing unreciprocated punches at Leiter, and was given a game misconduct. Rapid City, which registered only three shots in the final frame, didn’t score on the five-minute power play, but drained valuable clock.

Utah pulled Miner twice in the final 2:32 of regulation for an extra attacker but Parik saved the remaining 6-on-5 shots he saw.

Puck drop for Game 6 is scheduled for 7:10 p.m. Monday at the Maverik Center in West Valley City, Utah. 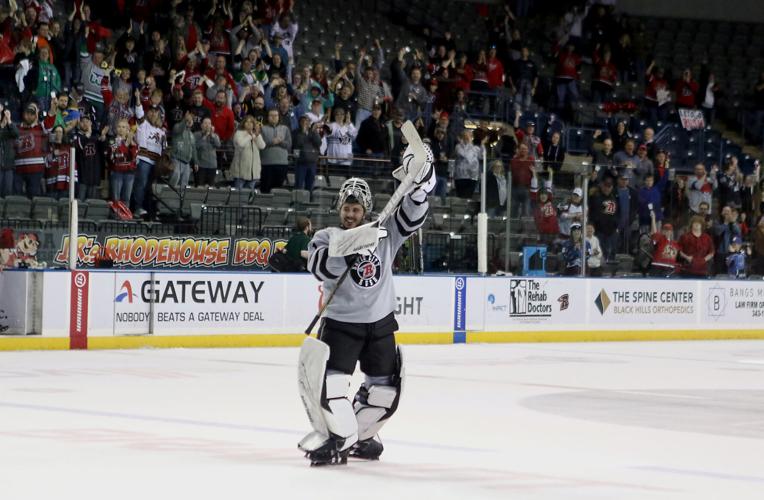 Rapid City goalie Lukas Parik celebrates with the Rush fans Wednesday night in the Monument Ice Arena after making 43 saves in a 3-0 shutout win over Utah. 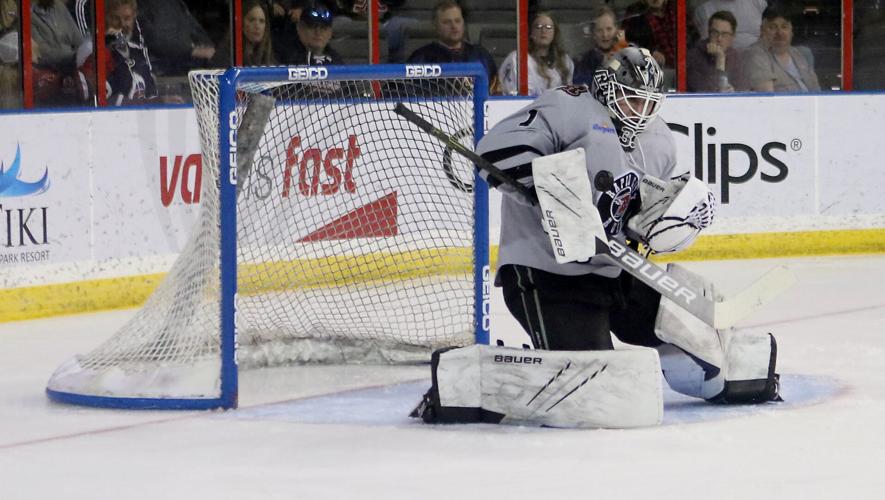 Rapid City goalie Lukas Parik uses his body to block a shot in the Monument Ice Arena Wednesday night. Parik made 43 saves in a 3-0 shutout win over Utah. 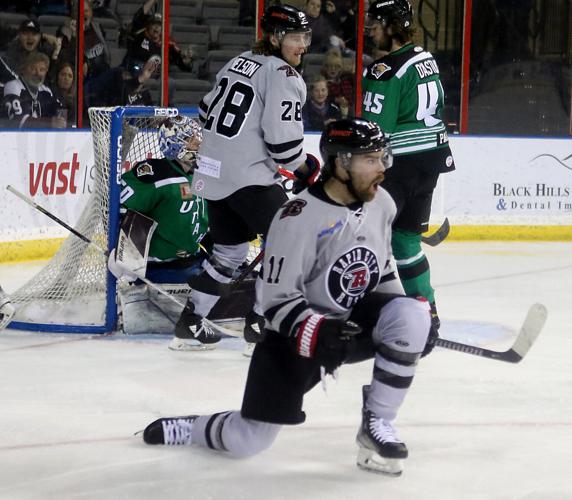 Rapid City forward Alec Butcher (11) celebrates scoring the third goal of the game for the Rush in a 3-0 win on the Monument Ice Arena Wednesday night.