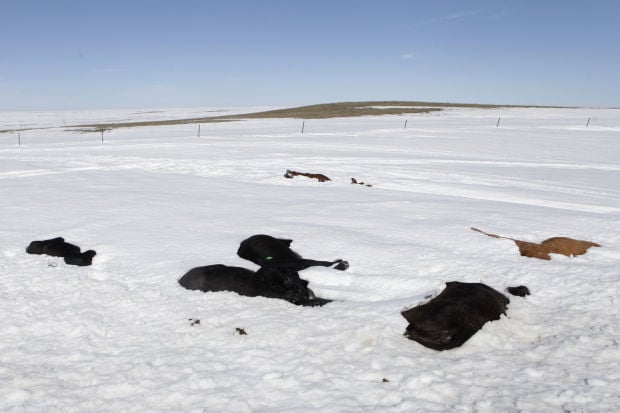 Cattle could be seen in the ditch off Highway 34 east of Sturgis on Monday. It is estimated that thousands of cattle died as a result of the early October blizzard. 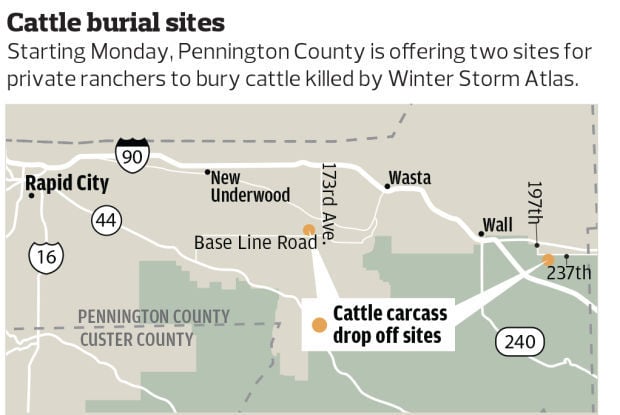 In a bid to help ranchers dispose of thousands of cattle killed in last week's blizzard, Pennington County plans to open two mass-burial pits for free public use starting Monday.

Pennington County, like many other counties around the Black Hills, has been scrambling to figure out how to remove a sea of dead cattle that froze to death in the storm. The carcasses have become fodder for wild animals and are a growing public health concern.

On Thursday, Pennington County commissioners voted to open two mass-burial sites to the public. Both are currently being excavated just south of New Underwood and Quinn.

The sites were originally intended to handle the estimated 200 to 300 dead cows that lay dead on Pennington County roads, but the board decided that it will also open the pits to the public when excavation is complete.

"To me it would be government at its best to work with people to make that happen," Commissioner Ken Davis said.

On Friday morning, in response to a comment made by a county spokesman on Thursday that suggested ranchers could be charged for dumping, the county clarified that the drop sites would be free for all ranchers in Pennington County.

The county also added that exact dump locations would be announced on Monday morning.

Cattle another casualty of October blizzard

Thousands of cattle across the region were lost to this weekend's devastating blizzard.

'How can we feel safe?': Uyghur on Chinese government policy

Cattle could be seen in the ditch off Highway 34 east of Sturgis on Monday. It is estimated that thousands of cattle died as a result of the early October blizzard.