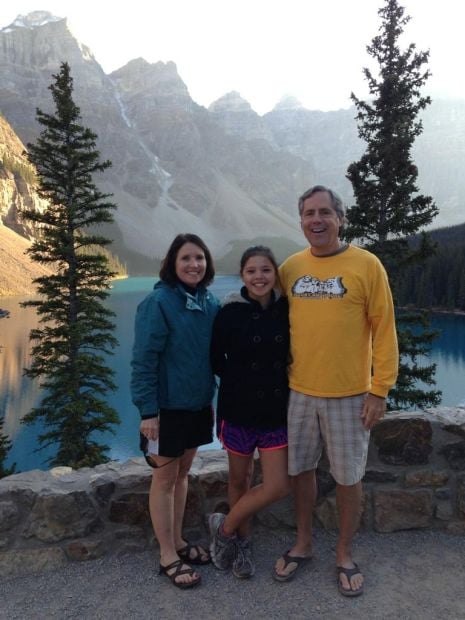 State Sen. Phil Jensen, his wife Janet, and their daughter Tabitha pose for a family photo in September at Banff National Park in Alberta, Canada. 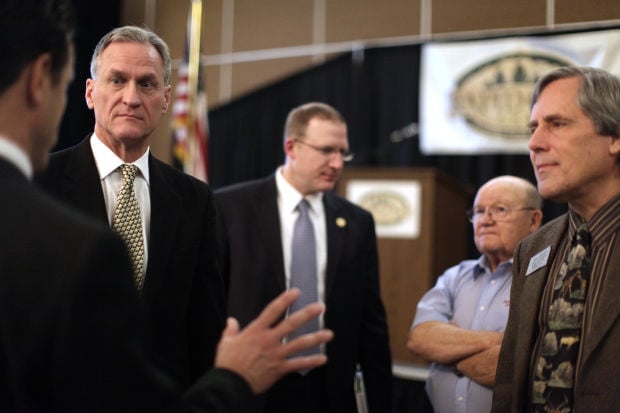 Gov. Dennis Daugaard speaks with Scott Craig of the Heritage Foundation, foreground, and Sen. Phil Jensen of District 33, far right, before the governor speaks to the Chamber of Commerce during a luncheon at the Rushmore Plaza Civic Center. 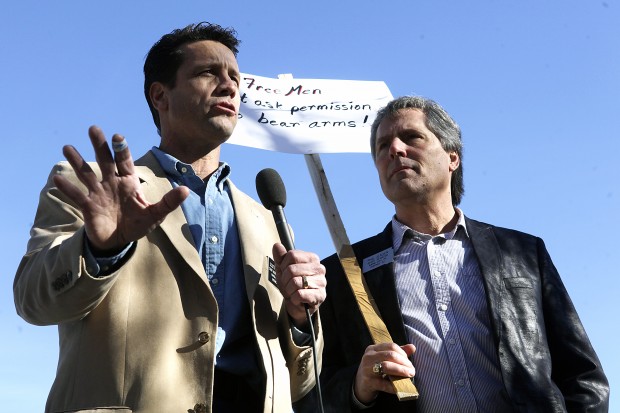 It was July 10, 2003, and Phil Jensen, a life-long Kansas boy and red-blooded Republican, was set for a big move.

Jensen and his wife were relocating from Wichita to Rapid City to live closer to family. It was then, while piling up furniture, clothes, and a thousand household trinkets into the back of a U-Haul, that an idea struck him.

Using a black marker and a 6-foot chunk of poster board, he taped a sign to the truck's driver's side: "Moving to South Dakota to Vote Senator Daschle Out."

At the time, Sen. Tom Daschle, a South Dakota Democrat and a party leader, had led filibusters against two judges nominated by President George W. Bush — a move that had grated Republicans like Jensen.

His sense of irritation was shared, apparently, by other motorists across the northern plains. Jensen said he was greeted by honks and waves for the entirety of his 700-mile journey — culminating in a particularly warm display of gratitude from a man who approached him at a Nebraska truck stop.

"He said, 'well, God bless you, God bless,'" Jensen said with a laugh.

After he arrived in Rapid City, stories of Jensen's playful stunt helped ingratiate him into local Republican circles. He made friends and built contacts. In 2008, encouraged by those connections, he ran for the state Legislature and won, serving in the House from 2009-2012.

Today, Jensen, 61, a state senator representing District 33 in Meade and Pennington counties, also works as a dealer for Saladmaster cookware. Politically, he checks many of the usual Republican boxes: He believes in a free-market economy, backs small government and supports few, if any, regulations on guns. He and his wife are evangelical Christians.

But where Jensen differs from many of his Republican colleagues in the state house, he says, is that he is a true conservative.

While he doesn't like to point fingers — "you're going to get me in trouble" — Jensen believes too many members of his party are Republicans in name only.

Conservative to the core

As his case in point, Jensen said he is appalled that only a handful of senate Republicans, like himself, are fighting the implementation of Common Core education standards. Those standards are being rolled out across the country, including in Rapid City, to create a set of testing standards for what K-12 students should know in math and reading.

Jensen opposes Common Core because he sees it as mandate that conflicts with South Dakota's autonomy. He still struggles to understand why more Republicans aren't fighting with him.

"It's unbelievable," he said. "Some are Republicans because that's the only way they can get elected in their district."

Jensen's strong views occasionally draw heat from his colleagues. This session, Jensen sponsored Senate Bill 128, which would have allowed businesses to deny service to people based on their sexual orientation and not fear a lawsuit.

Lesbian, gay, bisexual and transgender advocates, and even some Republicans, decried the legislation as discriminatory. Sen. Mark Kirkeby, R-Rapid City, called it “a mean, nasty, hateful, vindictive bill.” It was killed in committee.

But Jensen remains a supporter of SB 128. He calls it a bill that would have ensured the freedom of businesses to choose their clientele.

"It's a bill that protects the constitutional right to free association, the right to free speech and private property rights," he said.

Jensen goes so far as to say that businesses should have the right to deny service based on a customer's race or religion – whether that's right or wrong, he says, can be fairly addressed by the free market, not the government.

"If someone was a member of the Ku Klux Klan, and they were running a little bakery for instance, the majority of us would find it detestable that they refuse to serve blacks, and guess what? In a matter of weeks or so that business would shut down because no one is going to patronize them," he said.

He said that the bakery used in Jensen's example would have flourished a century ago, before the passage of civil rights legislation that helped protect African-Americans and other minority groups from discrimination.

"The free market didn't do away with slavery," Patton said.

Courage of his convictions

A glance at Jensen's Senate web page shows he was prime sponsor on a litany of bills rooted in deeply conservative ideals.

His bill that would have removed the prohibition against carrying guns in the state Capitol drew significant attention before failing.

On some occasions, it appears Jensen acts on his beliefs without considering the full impact of a proposed legislative measure.

Jensen supported another bill this session, killed last month, that would have required drug testing for welfare recipients. He said he believes that taxpayers have a right to know that their money is being spent appropriately.

But asked whether he thinks recipients of other forms of government assistance should be drug tested, like farmers who receive subsidies, Jensen wasn't so sure.

"You got me there," he said with a laugh.

It's that kind of political stand that groups like the liberal American Civil Liberties Union of South Dakota find poorly thought out and particularly troubling.

Heather Smith, the group's executive director, calls it a policy based on the false premise that welfare recipients use drugs more than other sectors of society.

While Jensen's views may not be popular with civil rights activists, some of his bills are less political. He successfully pushed for a ban on exploding targets that have started fires in the Black Hills; he pushed for but lost on an earlier archery season for deer; and tried but failed to get free fishing licenses for state residents over 85.

Some of his business-friendly legislation has earned him a few fans.

Jensen pushed a bill this session that would make it easier for producers to sell raw milk. He's a big supporter of the unpasteurized product: he's been drinking it for three years, and he believes it offers nutritional benefits that are absent in pasteurized milk.

The bill was ultimately tabled and a working group was set up to produce a new set of raw milk regulations. But his advocacy for the legislation has earned him plaudits from members of the raw-milk lobby.

"He's a strong advocate for raw milk and food freedom in general," said Gena Parkhurst, secretary of the Black Hills chapter of Dakota Rural Action. "And we couldn't ask for a stronger supporter. He's awesome."

At the end of the day, whether you agree with him or disagree with him, Jensen hopes, at the very least, you can respect he's a lawmaker who has the courage of his convictions.

State Sen. Phil Jensen of Rapid City has put himself in the national spotlight — and not in a good way — for a remark made last week that busi…

David Johnson, a Rapid City arborist, announced Thursday that he will face state Sen. Phil Jensen in this year’s Republican primary for Distri…

State Sen. Phil Jensen, his wife Janet, and their daughter Tabitha pose for a family photo in September at Banff National Park in Alberta, Canada.

Gov. Dennis Daugaard speaks with Scott Craig of the Heritage Foundation, foreground, and Sen. Phil Jensen of District 33, far right, before the governor speaks to the Chamber of Commerce during a luncheon at the Rushmore Plaza Civic Center.