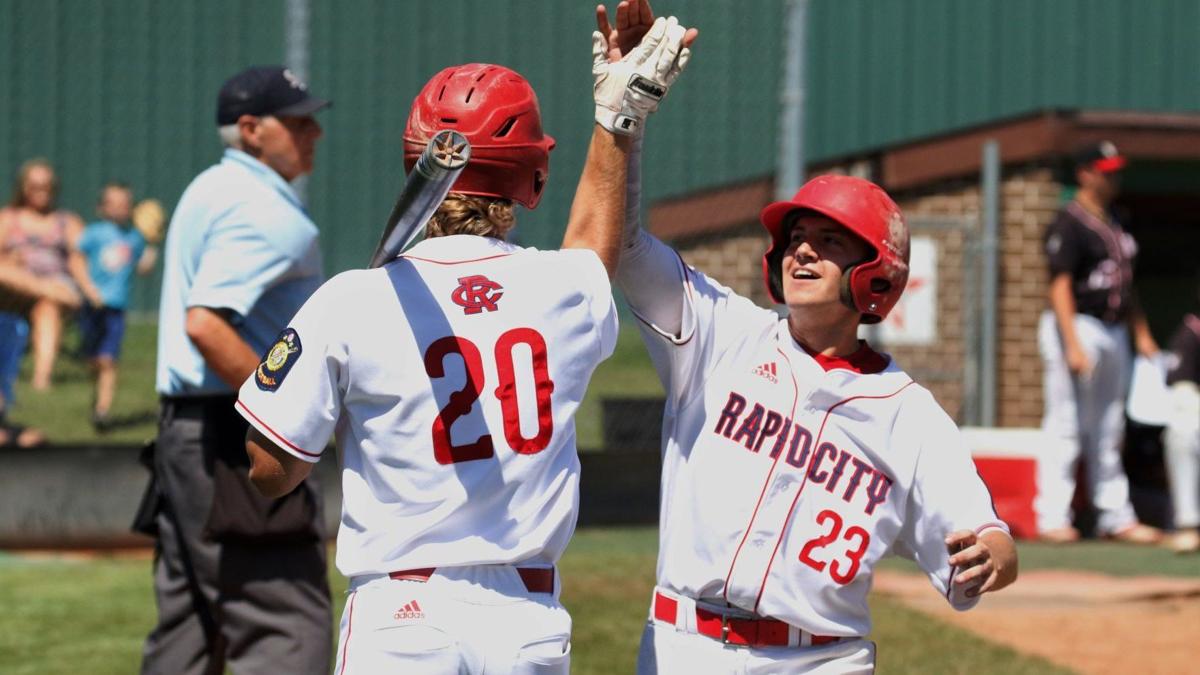 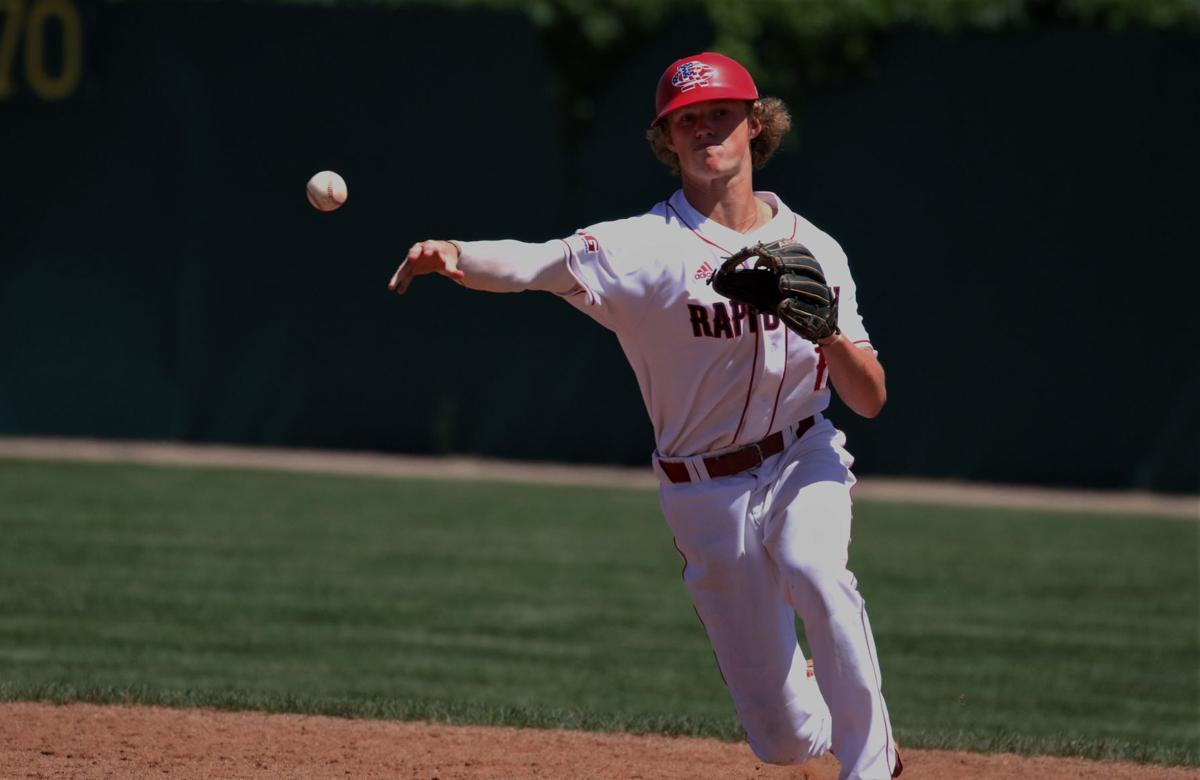 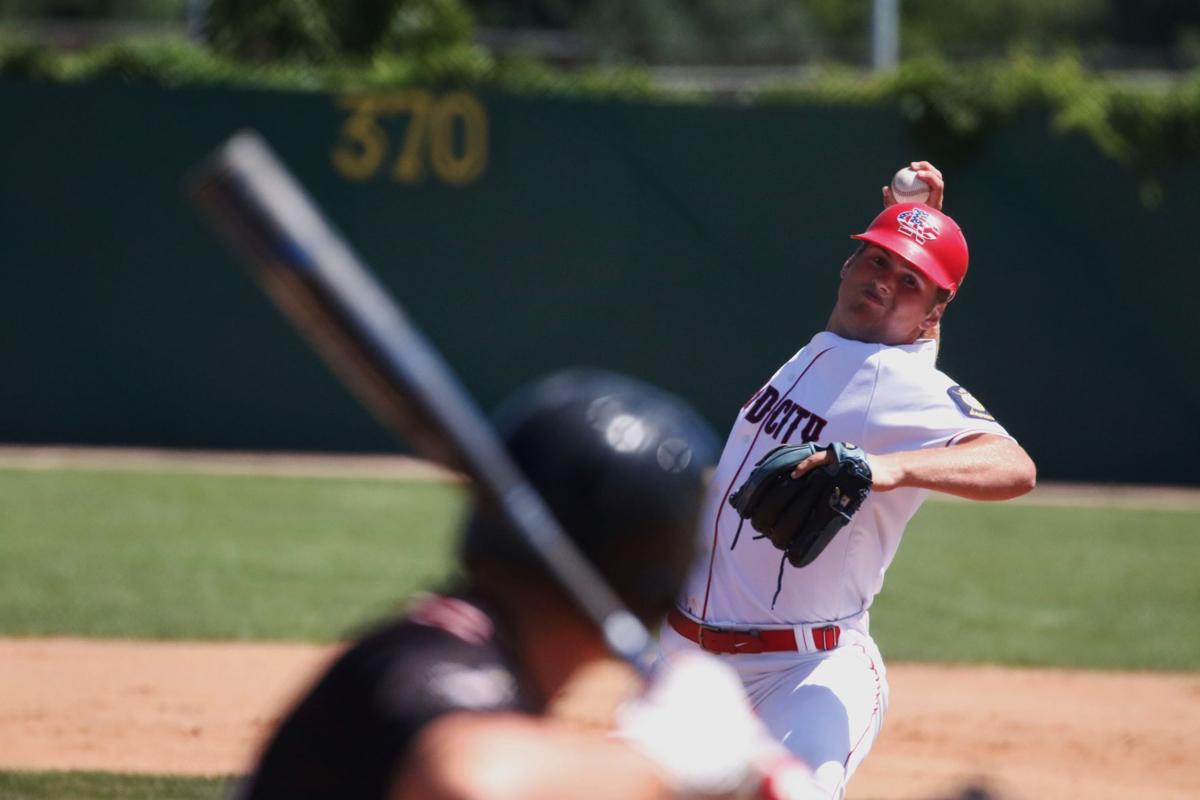 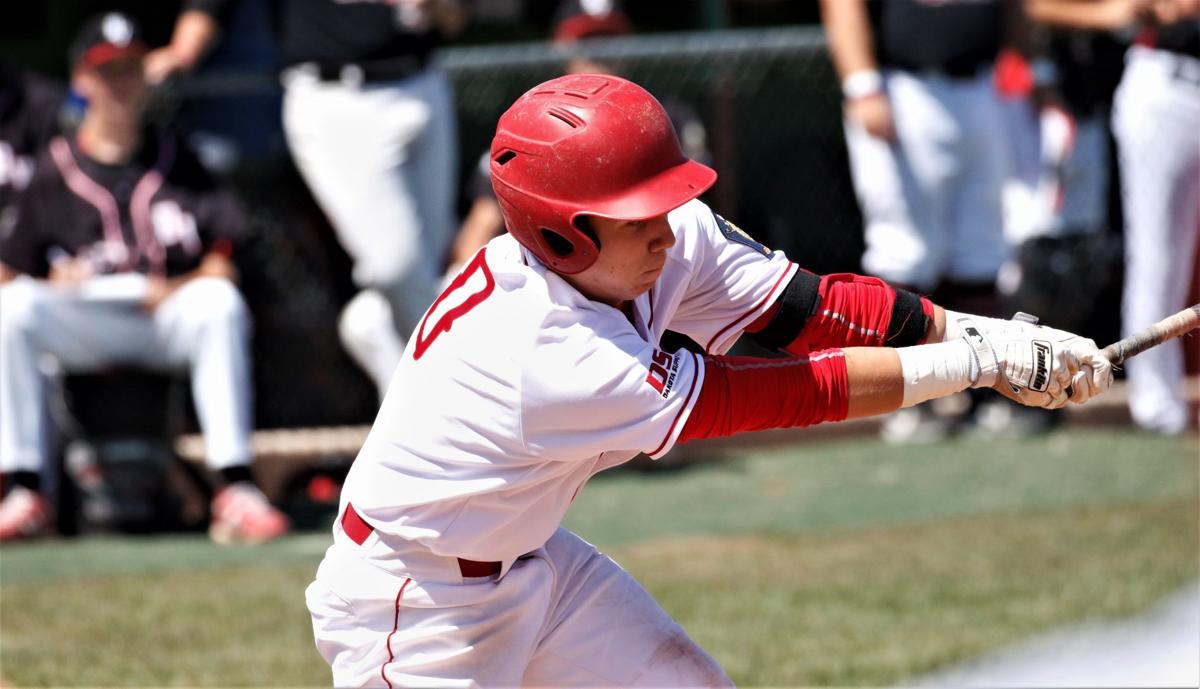 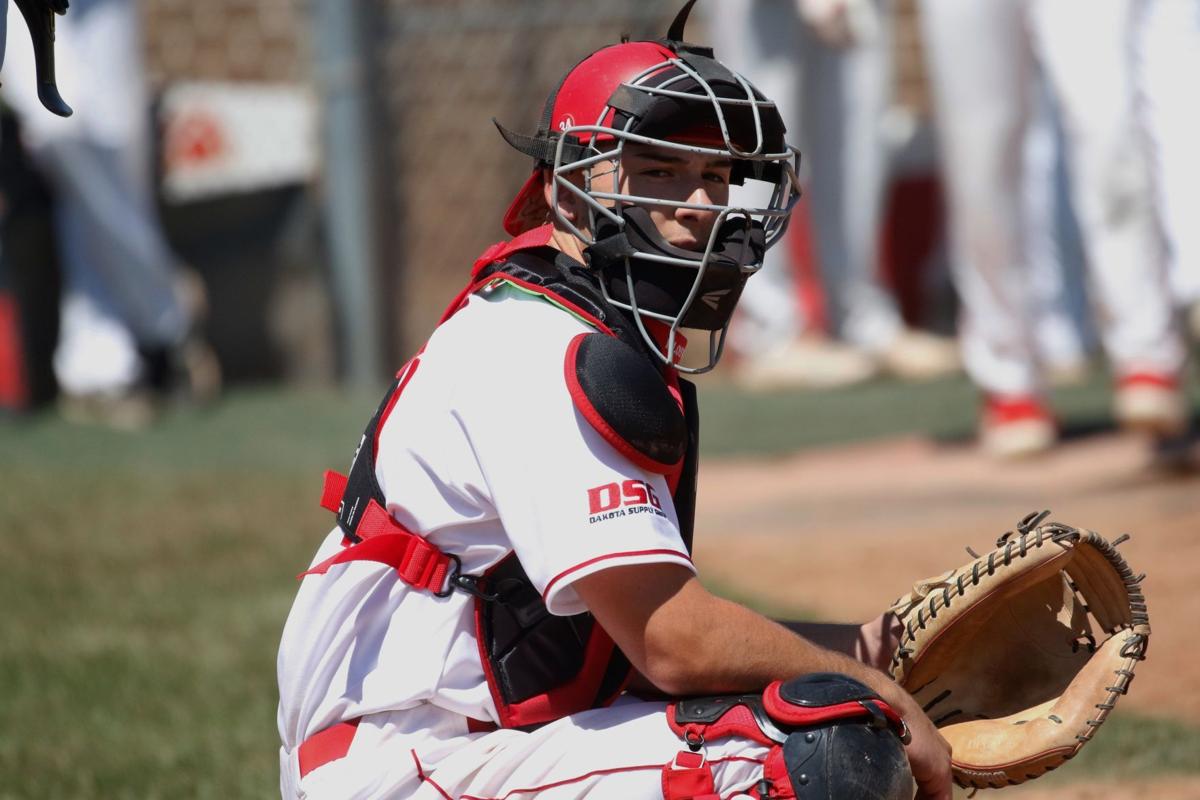 Rapid City Post 22 catcher Dalton Klosterman checks for a sign from the dugout against Brandon Valley Sunday in the South Dakota American Legion State A baseball title game at Pete Lien Memorial Field. The Hardhats captured their 43rd state title with a 9-1 win. 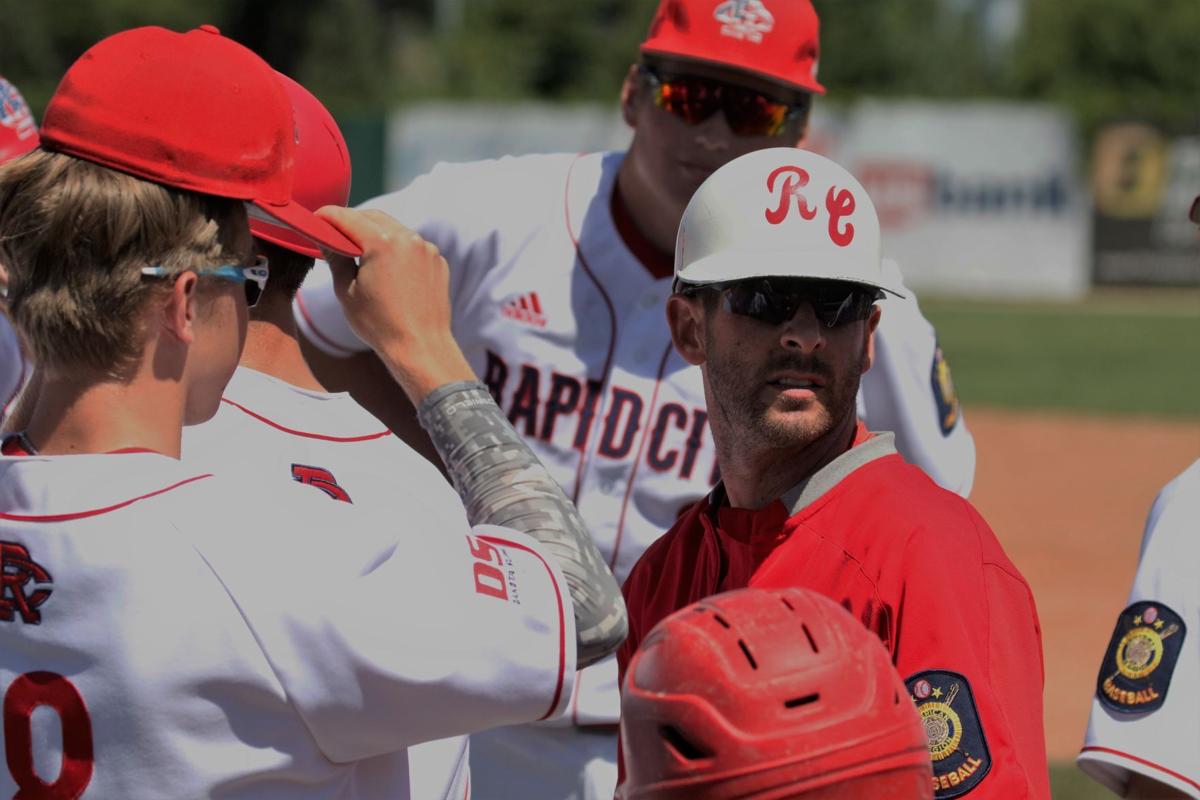 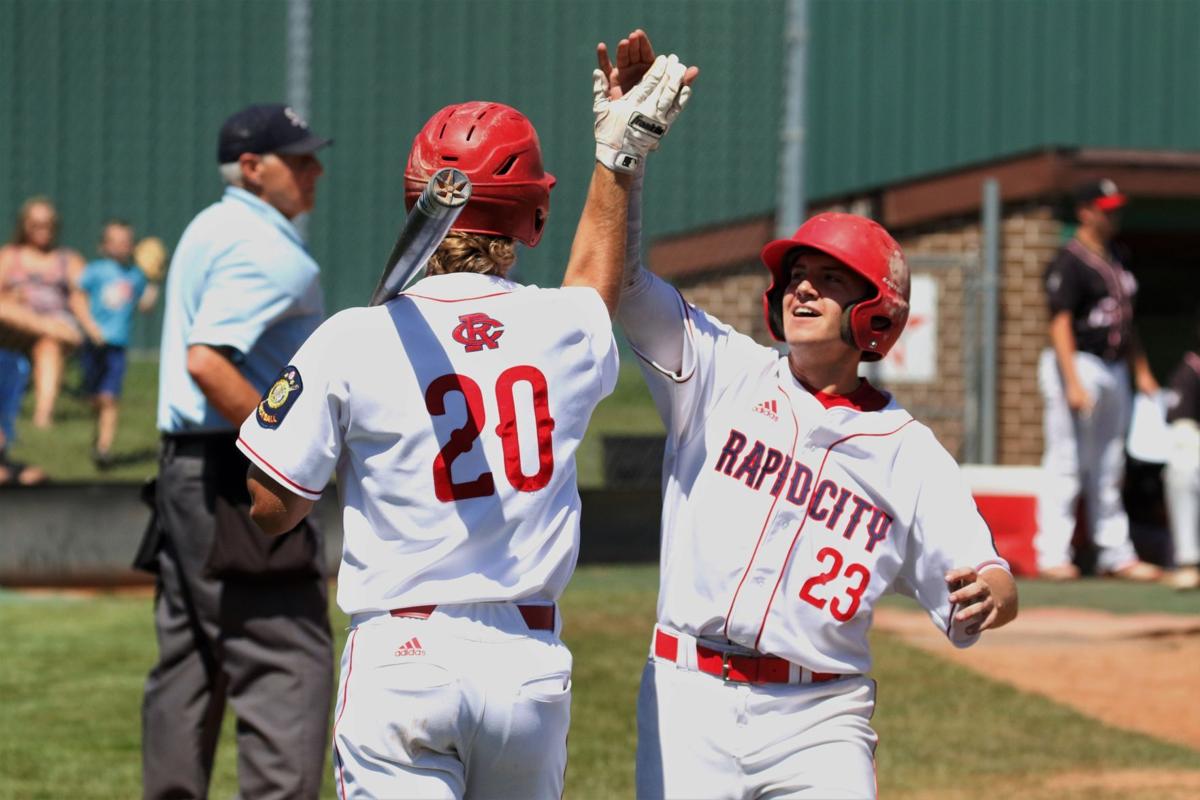 In a season that almost didn't happen because of the COVID-19 pandemic, the Hardhats went into the South Dakota American Legion State A playoffs as the top seed and played like it, capping a 7-0 postseason with three wins over the weekend at Pete Lien Memorial Field.

Post 22 had a little cushion of being unbeaten going into Sunday, but didn't want to take a chance of playing two games against a strong Brandon Valley team, the No. 2 seed of the tournament.

The Lynx showed why Saturday in the semifinal game, coming back from an early 6-0 deficit before falling 7-5. After another early 6-0 lead for Post 22 on Sunday, the Hardhats kept their pedal to the metal and never looked back.

“We wanted to take advantage of the first game, we didn’t want to have to stress about a second one," Post 22 shortstop Ryan Bachman said. "We wanted to play like it was one game, and I think it was our best game of the year. I think Jake (Goble) threw his butt off and we played great defense behind him. We got big outs when we needed to get them and big hits when we needed them."

Goble continued his strong late-season pitching, holding the Lynx scoreless through five innings before allowing the lone Brandon Valley run in the sixth, giving way to closer Tad Scherbenske, who shut the door for the final five outs.

Goble said that it was a team effort and credited the defense behind him.

“I just needed to throw strikes, get people out with some bad contact, and keep the ball on the ground to let the defense get outs,” he said. “That’s what I did.”

Brandon Valley opened the game with a threat, putting its first two hitters on base, advancing them to second and third with one one out. That's where they stayed.

“They had runners on first and second with no outs, and we got out of it. That was big momentum,” second baseman Colton Hartford said. “Dalton had a huge double to kind of open it up. We were kind of tense before then, but once we got some runs on the board, we played our game.”

Post 22 took a 1-0 lead on a RBI single by left-fielder Hunter Tillery, followed by Klosterman's double that scored right-fielder Blake Weaver and Tillery.

First baseman Dylan Richey, the tournament's most valuable player, made it 5-0 with a two-out single, scoring Klosterman and Bransen Kuehl, who reached on a walk.

Klosterman said the Hardhats had to beat the Lynx to the punch when it came to making noise on the scoreboard and in the dugout.

“We knew that when Brandon Valley comes out they are loud and they try to match our energy,” Klosterman said. “We weren’t going to let them do that, so we came out early and got some runs, and we had a more relaxed, comfortable lead. We stayed relaxed and played our game today.”

Goble was given a  6-0 lead in the bottom of the fourth on a RBI single by Hartford, scoring Klosterman, who also singled.

The Lynx got their lone run in the sixth on one single and three walks, prompting the Hardhats to bring in Scherbenske, who with the bases loaded got a force at home on a ground ball to third baseman Matthew Hegre and a fly out to Kuehl at center.

The Hardhats put the game away with three runs in the bottom of the sixth on a RBI single by Bachman, a run-scoring hit-by-pitch by Hegre and a RBI sac fly by Weaver.

Brandon Valley put a pair of baserunners on in the top of the seventh, but Scherbenske got Jaxon Haase to fly out to Weaver in right field to end the game and set off yet again a Post 22 state title dog-pile celebration.

“We played a full game today, and it was fun to watch,” Post 22 manager Kelvin Torve said.

Goble picked up the win, scattering five hits in 5 1/3 innings, walking six and striking out seven.

“Jake Goble came out and he continued to do what he has done all year,” Torve said. “He threw strikes and got out of trouble. When you have somebody like that competing, it makes it a little easier at the plate.”

Klosterman led the six-hit Post 22 attack with a pair of hits, as he and Richey both drove home two runs. Hartford, Bachman, Hegre, Weaver and Tillery all had one RBI.

Klosterman, who was injured Friday night on an awkward slide at third, said that when the injury happened he was kind of worried that he couldn’t help the team as much as he wanted to.

“But then I got cleared Saturday, I knew I was good to go,” he said. “I knew that if I got another chance to get on the field, I really had to show up and help my team by being a leader, and that is kind of what happened.”

“Everything came together at the right time,” Richey said. “I couldn’t have won MVP without runners on base, and without the guys behind me.”

Seven different players had one hit for Brandon Valley, which closed the season at 30-13. Haase earned the Big Stick Award in the tournament as he was 6-of-11 hitting with four RBI.

“I was nervous playing them. They are a very good team and they beat us two of three during the regular season,” Torve said. “I knew they were going to be tough. They were yesterday and they were today as well. The score may not indicate it, but I wasn’t relaxed until we got that last out, because they are a dangerous club.”

The Hardhats fell to Renner 6-4 in last year's title game, which proved to be fuel that drove the team this season.

“It feels good this year after how heartbreaking it was last year,” Weaver said. “Every day we thought about that moment and how we didn’t want to do it again. When that moment came, we would come through and do everything right. I felt good about how we played, we played well together, and I just love everybody here.”

Catcher Thomas Maguire said it is the exact opposite of last year’s feeling.

“To be able to go out on a win is pretty awesome," he said

Another state title was the perfect way for the eight seniors on the team to end their careers with the program.

“We have been playing together since we were young," Kuehl said. "We just had a bigger urge, considering last year, and we just wanted to win."

The championship was the second in three years under Torve, who also won state titles while playing for legendary manager Dave Ploof.

The Rapid City Police Department and Pennington County Sheriff's Office are searching for 31-year-old Drew Vanosdel, who is a suspect in a vio…

Rainfall on opposite corners of the country

Rainfall on opposite corners of the country

Rapid City Post 22 catcher Dalton Klosterman checks for a sign from the dugout against Brandon Valley Sunday in the South Dakota American Legion State A baseball title game at Pete Lien Memorial Field. The Hardhats captured their 43rd state title with a 9-1 win.