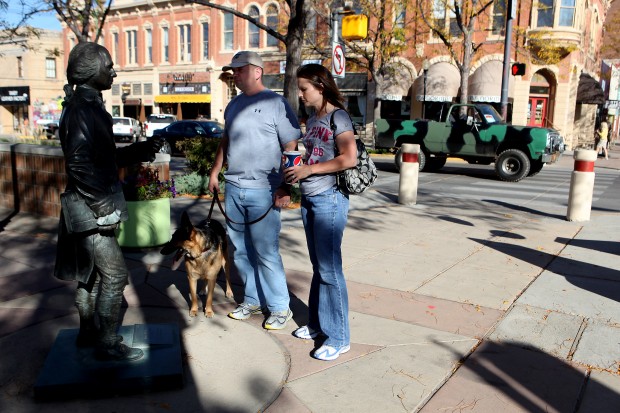 From left, Joe Leo and Amanda Leo, Iowa, walk with their dog Zena through downtown Rapid City on Thursday afternoon, October 7, 2010. The Leos spent nearly a week visiting sites around the Black Hills but made a special trip through downtown to see the statues of presidents. (Kristina Barker/Journal staff) 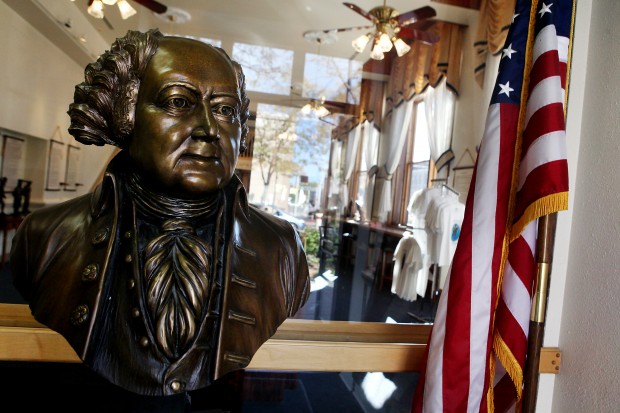 The bust of John Adams, sculpted by John Lopez, greets visitors to the President's Information Center in downtown Rapid City. The City of Presidents life-size statue project will conclude on Saturday with the unveiling of three presidents. Each of the presidents that have finished their term in office will have a corner in downtown. (Kristina Barker/Journal staff) 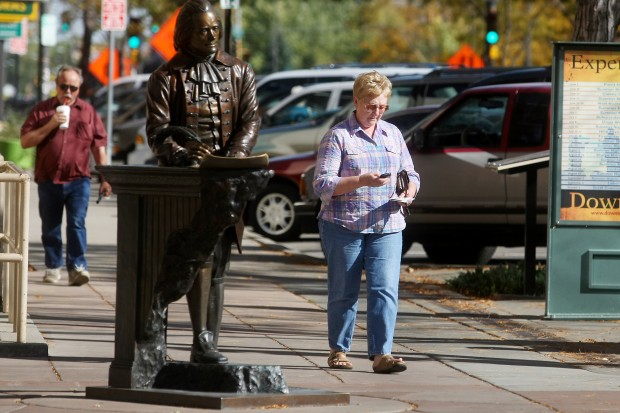 It all started with a statue of Abraham Lincoln.

In the late 1980s, the Gutzon Borglum "Seated Lincoln" from Keystone went on display in front of the Hotel Alex Johnson, and an idea hatched in the mind of Rapid City businessman Don Perdue.

"I saw all of these people taking pictures of Lincoln," Perdue said. "What if we had a whole downtown of presidents?"

When the bronze statues of Chester A. Arthur and George W. Bush are unveiled Saturday at the Elks theatre, that idea - a marriage of public art and downtown economic development - will have finally become reality. A statue of Bill Clinton will be unveiled later this year after foundry issues delayed his arrival.

After a decade and more than $2 million in private donations, all 43 of our nation's past presidents will have found their home on street corners in downtown Rapid City this year.

"Everyone thought we were foolish and it would never happen," Perdue said. "But by God, it did."

The difference that investment has made in Rapid City is apparent whenever people gather around John F. Kennedy or Ronald Reagan or George Washington for a photo op, a daily sight during the summer tourist season, Mayor Alan Hanks said.

"The City of Presidents project was really the start of the revitalization of downtown Rapid City," Hanks said. "All too often, we don't realize what we have - an incredible connection with Mount Rushmore. We have 3 million people coming through Rapid City - what Don Perdue did is found a way to get people more interested in coming to downtown and spending more money downtown."

Perdue said the goal was always economic development - the statues get people downtown and once there, walking from one street corner to the next, browsing the shop windows as they go.

"We need to get people out of their cars," Perdue said.

The first statues - George Washington, John Adams, Ronald Reagan and George H.W. Bush - were unveiled in late 2000. Every year since, the City of Presidents Foundation has unveiled another four, two from modern times and two from historic.

But Perdue's idea would not have gotten off the ground had he not met Dallerie Davis, the foundation's vice president and an artists' representative, at a Lincoln Day dinner in 1999.

"The more we talked about it, the better it sounded," Davis said. "It really was a matter of having the artists ready and available who could do the work."

She arranged for five artists native to South Dakota to sculpt the presidents - John Lopez, Lee Leuning, Edward E. Hlavka, James Michael Maher and James Van Nuys. Each statue cost an average of $50,000, and Davis said the artists should be credited as donors for all the extra time and effort they invested into making each statue unique.

"We were really determined not to just put a guy in a suit on the street," Davis said. "We wanted it to speak to his personality as a president."

Certain statues posed more of a challenge than others, Davis said.

For Richard Nixon, board members hoped to capture both the angst and dignity of a tumultuous presidency. The statue at Fifth and St. Joseph streets shows the only president to resign from office sitting pensively in a chair of Chinese decor.

For Franklin D. Roosevelt, Davis said the board debated whether to show his disability, something Roosevelt tried so hard to mask while in office. Ultimately, Hlavka created a statue that from the front, shows a strong Roosevelt at a radio podium, but from behind, shows the leg brace and cane. He is located at Fifth and Main streets.

The path to 43 president statues hasn't always been smooth, though.

In 2001, a dispute between the Rapid City Council and the city's Public Art Committee over the statues' placement led to the citizen committee filing a lawsuit against the city.

Committee members alleged the city did not follow its own rules for placing public art for the first four statues, but a Seventh Circuit judge later ruled in favor of the city.

Over the last 11 years, the project's success has won over even its early detractors, Davis said. This summer, the information center on Main Street ran out of brochures - after printing 10,000.

Davis said the Perdue family also extended a line of credit to the foundation to make sure the project stayed on schedule, so they will continue to fundraise after Saturday's unveiling. As of Friday, six of the 43 statues still require sponsors.

Pat Hall, owner of Premier Properties in Rapid City, sponsored two presidents with his three brothers, Fred, Bill and Mike, in honor of their father, Walt, and mother, Melba.

Hall said he and his brothers couldn't think of a better way to pay tribute to their family, which has been in Rapid City for multiple generations. And despite the early controversy, Hall said they were positive from the beginning that the project would benefit Rapid City.

"Don Perdue's heart was in the right place," Hall said. "It was for the good of Rapid City."

"It's putting the city of Rapid City more on the map."

And while Saturday's unveiling may be the last annual event for the City of Presidents, both Davis and Perdue said they would like to continue on as future presidents leave office.

They have lined up a future sponsor for Barack Obama, Davis said, and identified up to 80 street corners.

What: City of Presidents statue unveiling

From left, Joe Leo and Amanda Leo, Iowa, walk with their dog Zena through downtown Rapid City on Thursday afternoon, October 7, 2010. The Leos spent nearly a week visiting sites around the Black Hills but made a special trip through downtown to see the statues of presidents. (Kristina Barker/Journal staff)

The bust of John Adams, sculpted by John Lopez, greets visitors to the President's Information Center in downtown Rapid City. The City of Presidents life-size statue project will conclude on Saturday with the unveiling of three presidents. Each of the presidents that have finished their term in office will have a corner in downtown. (Kristina Barker/Journal staff)