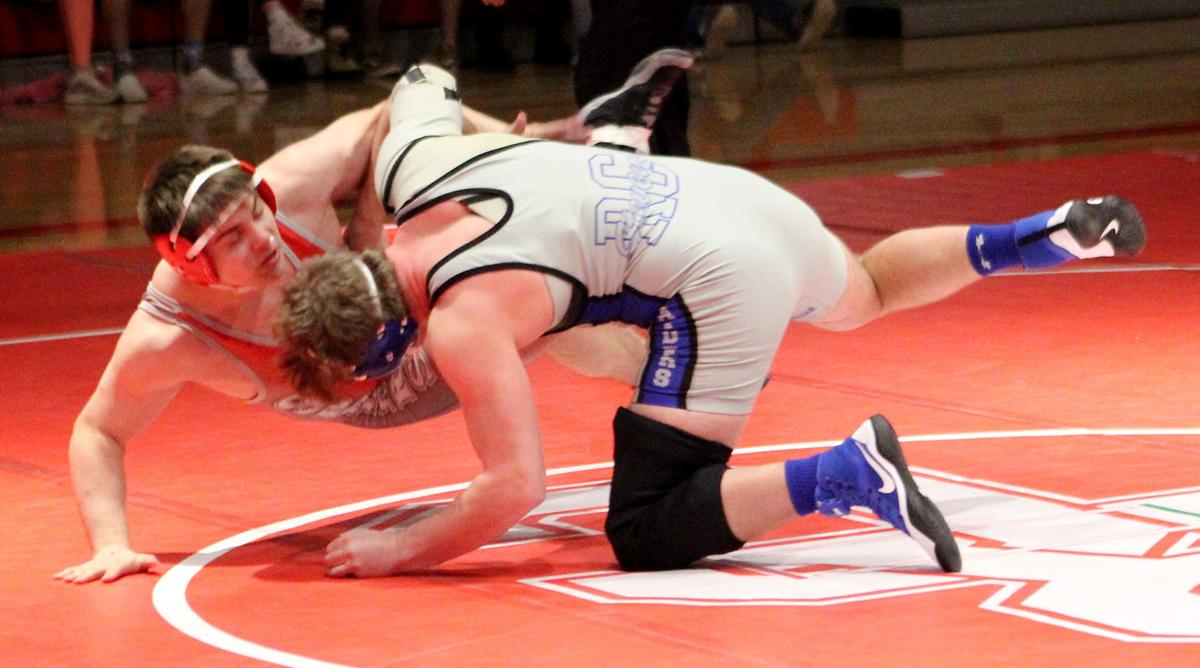 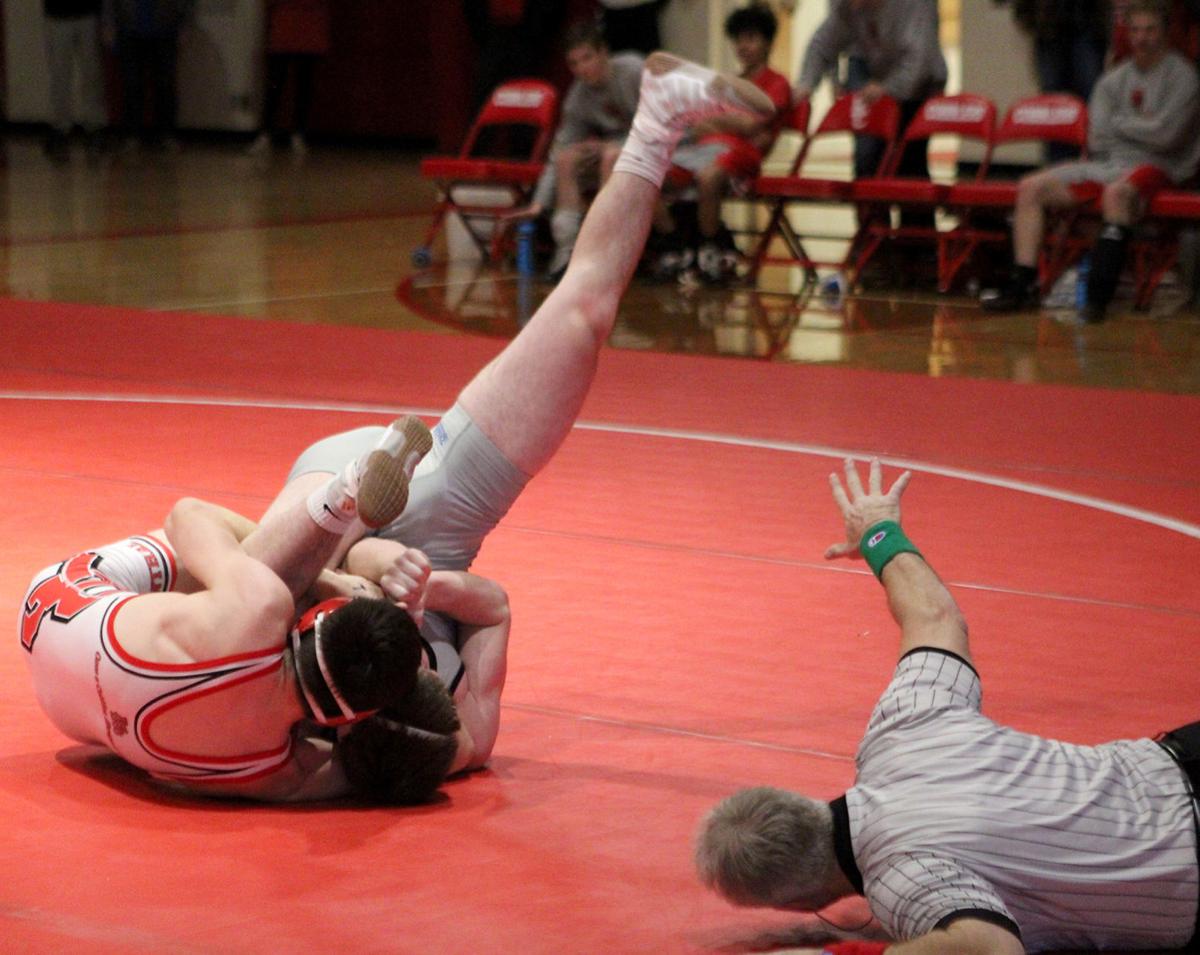 Wyatt Jungclaus gets a pin for Rapid City Central in the 170-pound match against Jayden Alexander of Rapid City Stevens Thursday night at Naasz Gymnasium. 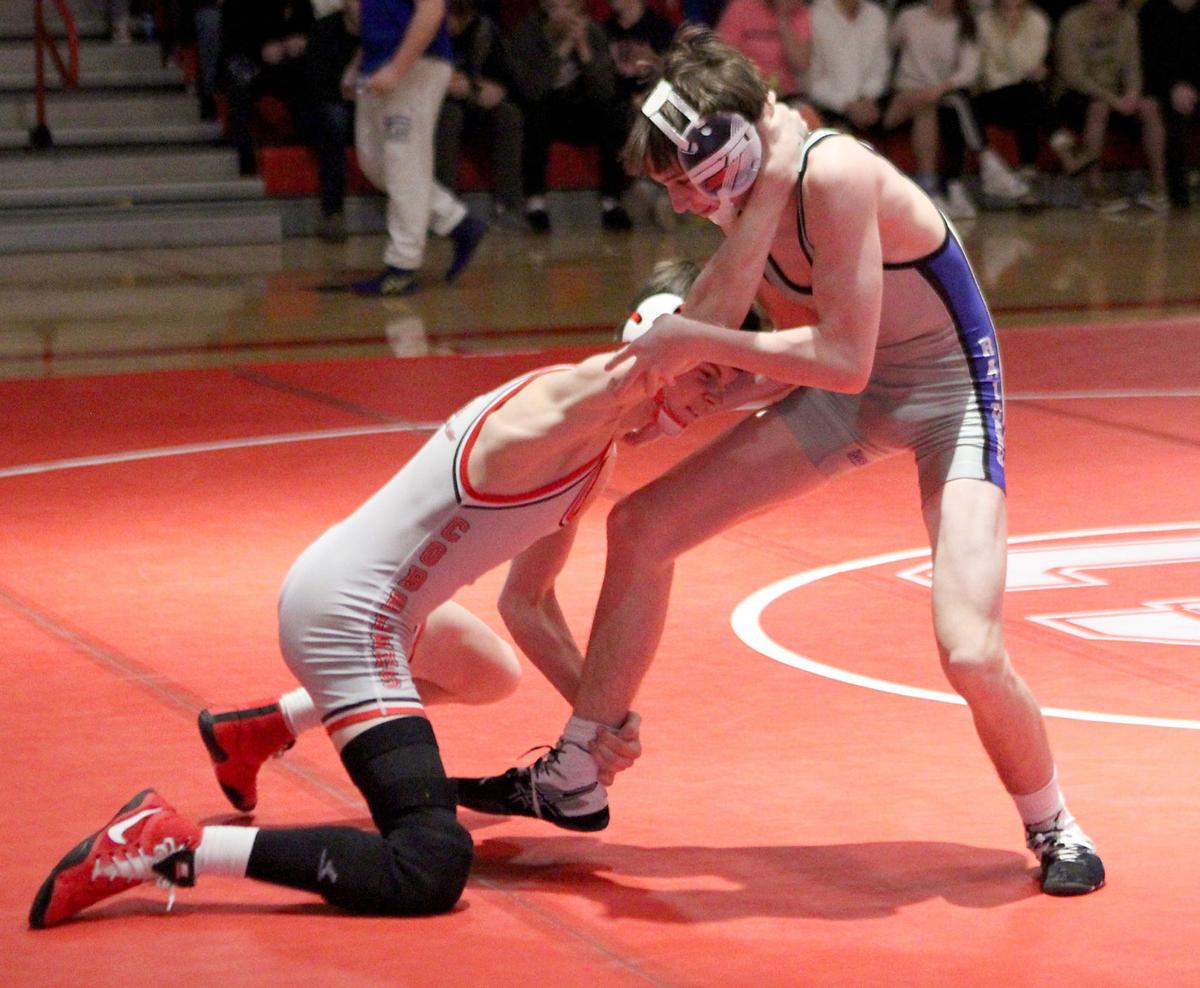 Rapid City Central's Cael Larson controls Hunter Casey of Rapid City Stevens before he got the fall in the first period Thursday night at Naasz Gymnasium. 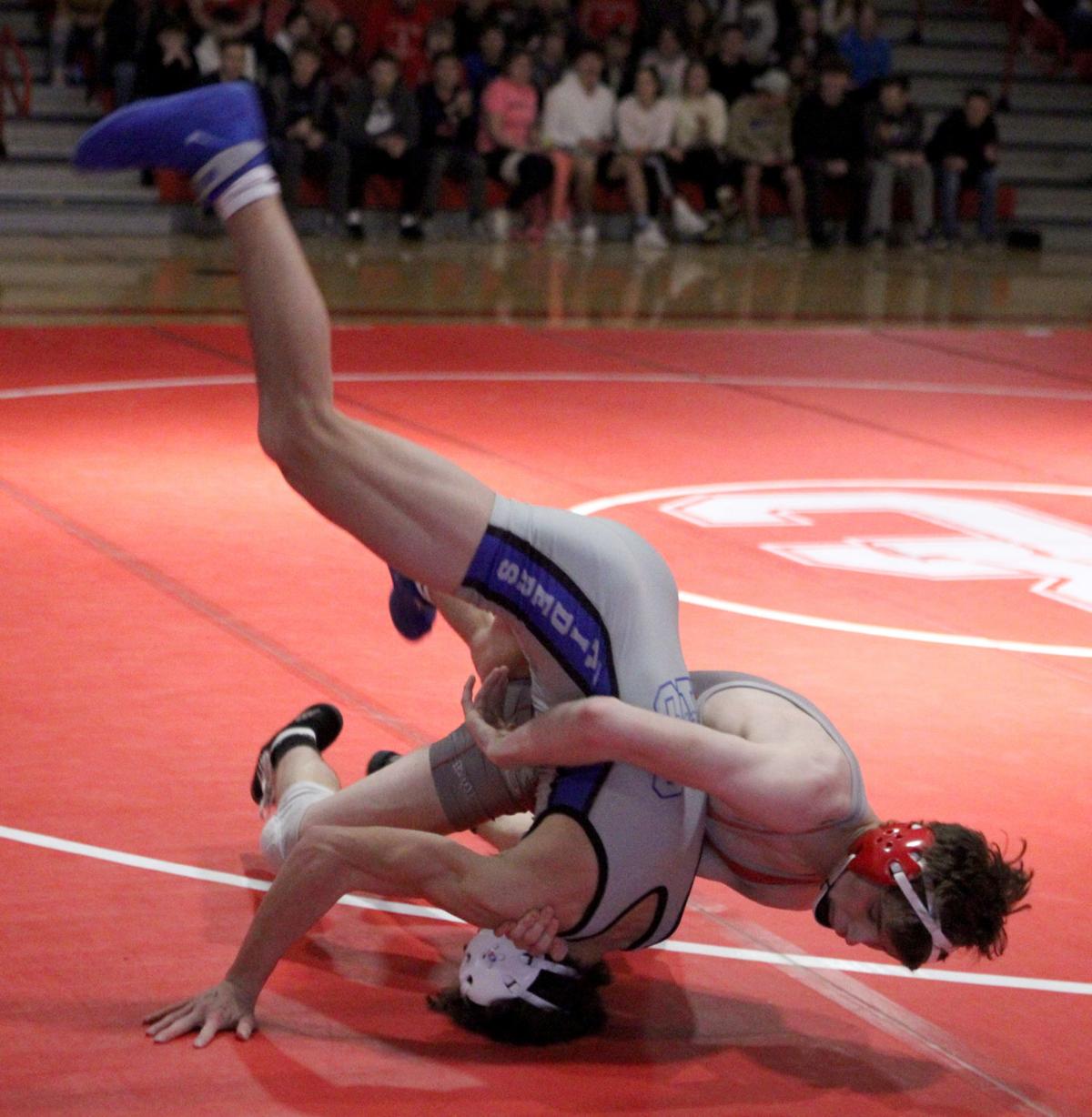 In a match punctuated by a plethora of pins, third-ranked Rapid City Stevens capitalized on six pins, including falls in the final four matches, to upend Rapid City Central 48-28 in dual wrestling at Howard Naasz Gymnasium Thursday night.

Sophomore Jack Schoenhard had the first Raider pin, a 44-second stick of Cobbler Logan Brown (:44 seconds) in the first match of the evening. Cooper Voorhees, No-1 ranked in Class A and 41-0 on the season, added another at 160.

And after Wyatt Jungclaus, the top-rated 170 pounder, won by fall over Jayden Alexander (:54) to give Central its final lead of the night (28-24), the Raiders reeled off consecutive pins by Caleb Brink (182), True Synhorst (195), Ryan Brink (220) and Eli Huot (285) to close out the Raiders third consecutive dual win over the Cobblers in the crosstown rivalry.

Decision winners for the Raiders included Corter Doney, 6-3 over Dakohta Reynolds a 132, and top-ranked 138 pounder, Declan Malone, over third-ranked Kaden Kraye by a 3-0 score in easily the most competitive match of the evening.

“I had beaten him 3-0 (Bismarck Rotary) in an earlier match, and it was a close match, so I knew it was going to be tough tonight,” said Malone, who relies on quickness and a stubborn unwillingness to surrender points to compile a 30-4 season record. “I know if I don’t give up points, I’m going to be very tough to beat. And I kind of knew what shots he was able to do and I was able to counter it. And as soon as I got on top, I knew he wasn’t going to score.”

A strategical decision by Stevens coach Travis King late in the match added to the Raiders late match push. With the match nip-and-tuck through the 160, King opted to bump his grapplers up a weight from 170 through 195, a move that helped setup the 24-point Raider run at the end of the match.

“I was thinking that after we lost the 113 match, we wanted to make sure that we took care of the upper weights,” King said. “They were stacking up in the middle weights, and as soon as they sent Jungclaus out at 170, we sent out Alexander out allowing us to move the other kids up. Caleb (Brink), True (Synhorst), and Ryan (Brink) are upper classmen and I felt comfortable putting them out there.”

Jungclaus (49-4) expressed disappointment at missing a chance for a mat meeting with Caleb Brink (37-8 and fourth-ranked at 170), although he understood the wisdom behind the decision.

“I was expecting to wrestle him, though I will see him next week at regions,” Jungclaus said. “But I do think him moving up really helped them out with him getting a pin. Before that we had kind of traded pin-for-pin and then they bumped and got another one.”

Central coach Lance Pearson, while understanding the rationale behind the late weight move, admitted that he would have liked to see the match between the two talented seniors in front of the hometown crowd.

“I’m all for making moves that help win you the match, though I think a lot of people here would have liked to see that match at 170,” Pearson said. “But they did what they needed to do and we didn’t have enough to battle it back.”

The dual completed the regular season schedule for both schools setting up next Saturday’s Region 4A state qualifying meet in Sturgis (10 a.m.).

Wyatt Jungclaus gets a pin for Rapid City Central in the 170-pound match against Jayden Alexander of Rapid City Stevens Thursday night at Naasz Gymnasium.

Rapid City Central's Cael Larson controls Hunter Casey of Rapid City Stevens before he got the fall in the first period Thursday night at Naasz Gymnasium.