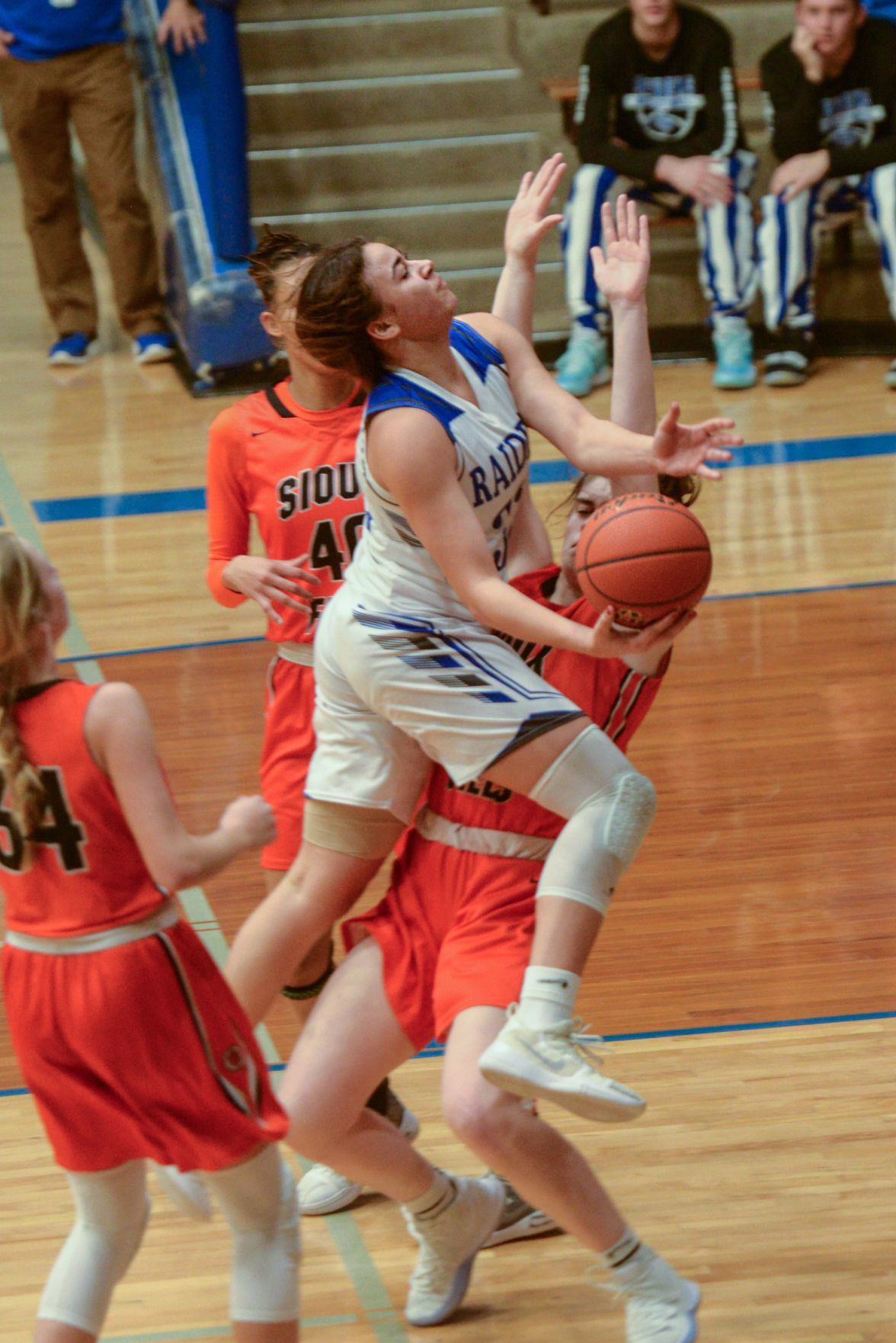 Rapid City Stevens senior Kyah Watson goes to the hoop despite the Washington defenders in her way Friday night against Sioux Falls Washington at Heier Gymnasium. 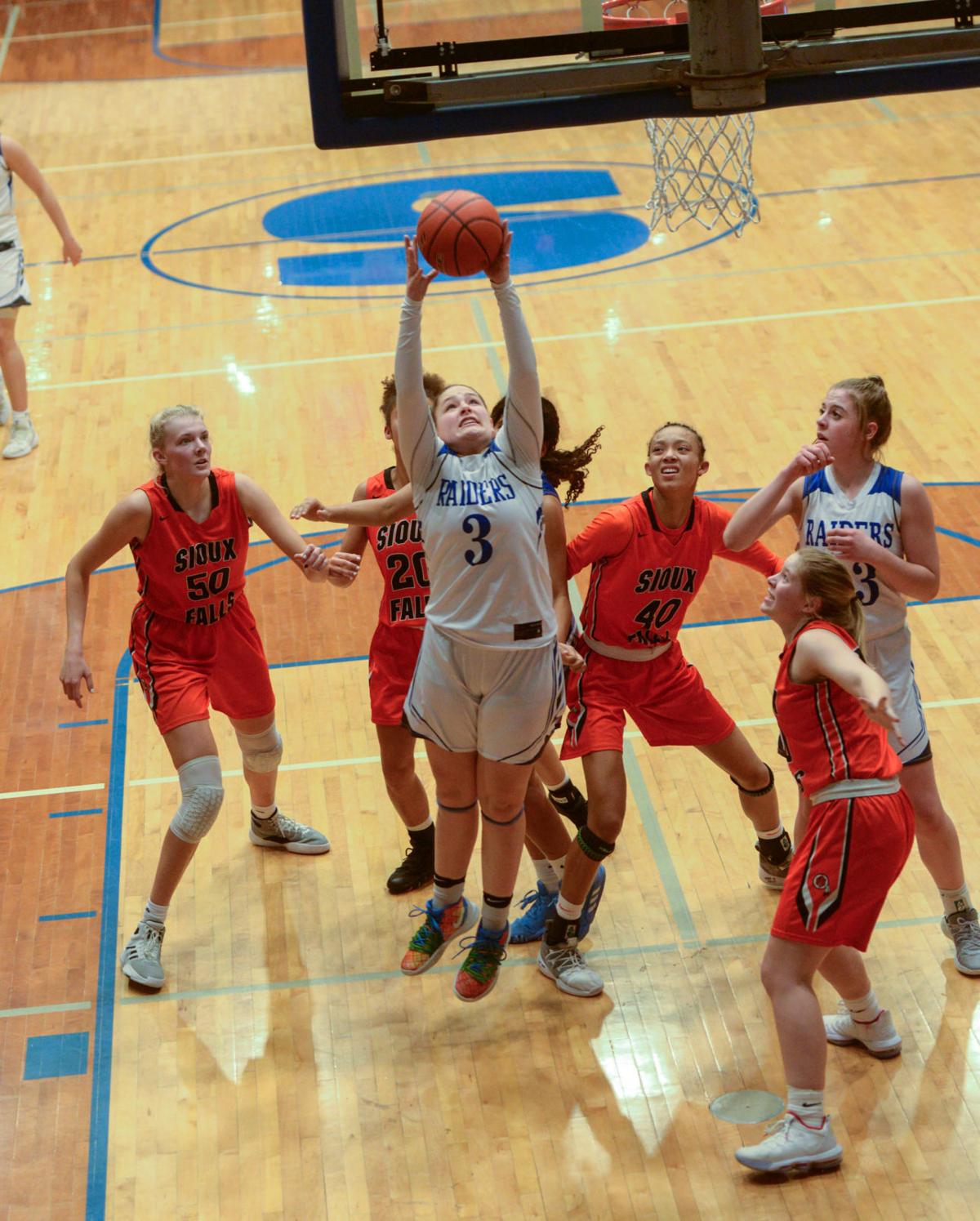 The Warriors tied the game at 34-all when Ndjakale Mwenentanda hit a free throw with 1:16 to play in the game. Martin found herself open on the weakside. Jayda McNabb kicked the ball to Martin, who coolly drained the 3-pointer.

“Ice water in her veins,” Stevens coach Travis Swartz said of Martin. “And for a senior who has sacrificed so much for our team. She comes off the bench; she doesn’t complain. She gets thrown into the starting lineup for three games and doesn’t complain. Then to hit that shot, it’s huge.”

With Washington making life tough on Stevens in the paint, Jayda McNabb found herself near the basket with ball in hand. Instead of trying to squeeze the ball up with 6-foot-5 Syndi Schetnan and the 6-2 Mwenentanda closing on her, McNabb alertly kicked the ball out to Martin on the wing for the 3-point basket that ultimately proved the be the game-winner.

“I knew the tall girls were in there, and if I could get the ball out to Grace, we’d have a better opportunity to make it,” McNabb said. “And we could rebound on the backside.”

Friday night’s game was the second where teams relied on defense over offense. And for the second straight game the Raiders found themselves up against an opponent that didn’t allow them to run the floor much.

“We knew we didn’t want to let them have transition,” Washington coach Jamie Parish said. “Stevens is really athletic, and they like to get out and go. We didn’t necessarily want to play that slow, but we didn’t want to be giving away layups.”

Stevens shot just 28.0% from the floor, making 14 of 50 shots. Washington shot even worse, making 12 of 57 shots for a 21.1% shooting rate. It wasn’t so much both teams were cold, but more so every shot was contested.

“Defensively, we executed the game plan to a ‘T’ and we haven’t always been able to do that,” said Swartz, whose team eked out a 29-26 win over rival Rapid City Central on Feb. 6. “I’m so proud of our kids for taking something we don’t typically do — playing a sagging, packed-in defense — and executing it.”

Stevens, playing with Kyah Watson back in the starting lineup after missing three games, looked to take control of the game through the heart of the second quarter. A 3-pointer from Rising — her second of the opening half — pushed the Raiders ahead 19-13 with 2-1/2 minutes to go in the second stanza.

Hannah Harpe and Eden Hullinger hit 3-pointers on back-to-back possession. Then Mwenentanda put back her own miss for a basket and Taylor Thompson hit a layup just ahead of the halftime buzzer to make it 23-19 Washington.

Stevens scored the first eight points of the third quarter to take a 27-23 lead with 5:40 to play in the period. Washington came back and tied it at 27-all on two free throws by Harpe before a Martin free throw sent the Raiders into the break up 28-27.

Baskets by Bailee Sobczak, Grace Ellis and Rising lifted Stevens to a 34-27 lead. Washington scored seven straight points to tie the game at 34-all with 1:16 to play to set up Martin’s game-winner.

“We told the kid you’ve got to win gritty sometimes,” Swartz said. “It’s fun to win games in the 70s, but you also have to figure the way to grind games out in the 30s and 40s.”

Rapid City Stevens senior Kyah Watson goes to the hoop despite the Washington defenders in her way Friday night against Sioux Falls Washington at Heier Gymnasium.