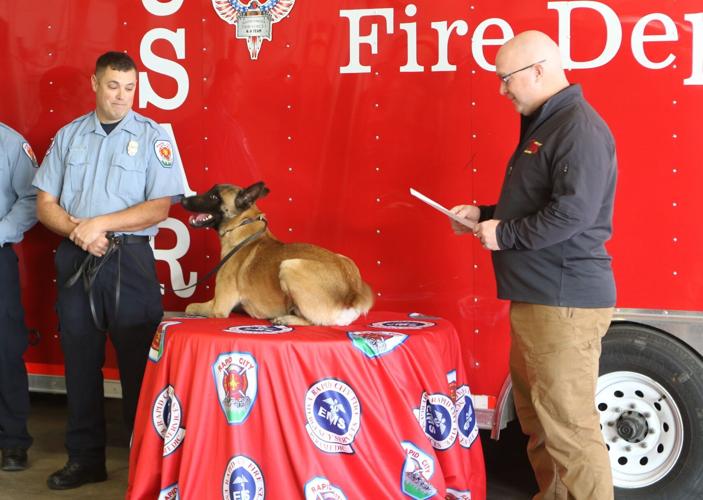 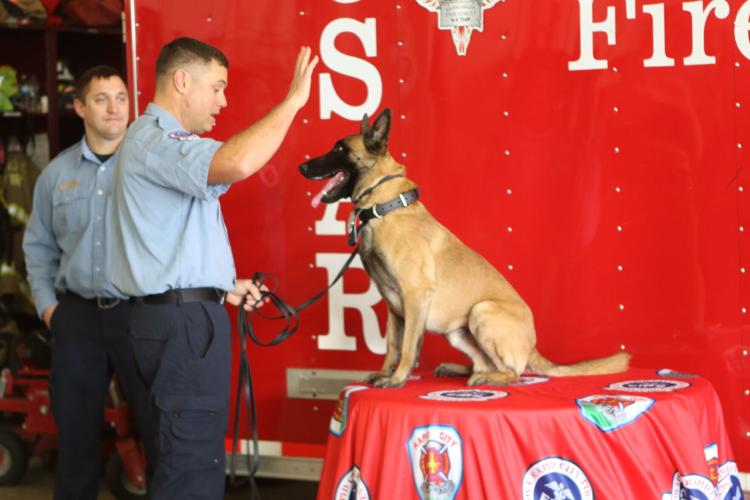 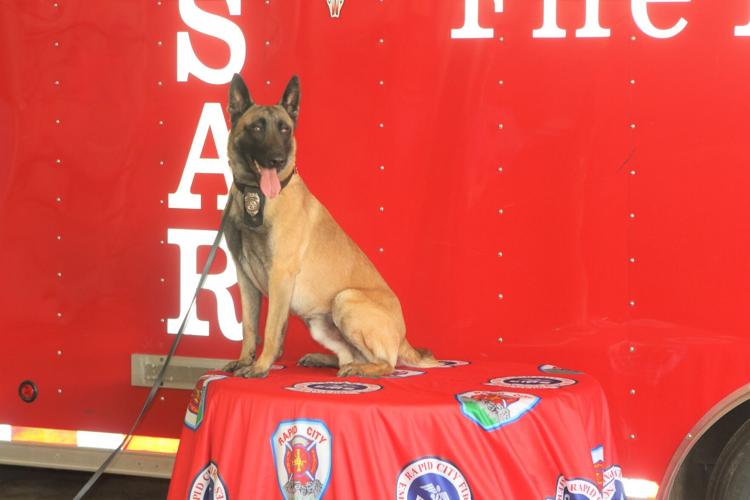 With a series of barks, the newest member of the Rapid City Fire Department took his oath of service and received his badge Monday morning at Fire Station 7 on Tish Boulevard in north Rapid City.

Drogon, a 2-year-old Belgian Malinois, is the department's second rescue K9. He will be certified in wilderness and disaster searches, RCFD K9 handler Jeremy Gibbons said.

"He will find lost people in the hills ...  or after a disaster like a tornado or a building collapse. He'll be cross-trained in both," Gibbons said.

Drogon was born in Illinois in 2020 and was 10 months old when the RCFD picked him up in Nevada. He arrived in Rapid City in August 2021 and replaces the RCFD's first K9, Cisco, a Belgian Malinois who had to retire early due to health issues.

Gibbons said that Belgian Malinois are fast and have a high pain tolerance, which primes them for the job.

"I've watched them work through some injuries and still keep searching and not want to slow down. I've been pretty impressed with them," he said.

The 2-year-old teenage recruit brought his youthful excitement with him to his swearing in ceremony, barking during portions of Chief Jason Culberson's reading of his oath. Despite his excitement, Drogon behaved well and looked for his handler's commands as he sat on a table positioned in front of a firetruck in the station.

Drogon is a one-handler dog, Gibbons said. He goes with him to the station when Gibbons is on shift and returns home with him as well, although he's not a pet.

"He's still a working dog," Gibbons said. "He doesn't sleep inside the house. He's got his own lot outside. He's treated a little differently until he's retirable."

Drogon trains 30-40 hours a month and has been working on obedience, bark alert, rubble searches and building searches. Gibbons uses German commands to instruct Drogon on what task to complete. Gibbons said Drogon should be ready for his certification in March 2023 after "a ton of training."

Once certified, Drogon will be a statewide emergency resource ready for call-out anytime day or night.

It wasn't until the woman got home at the end of the day that she was met by police officers, who told her the patient was her 17-year-old daughter, Montana.

A state prison inmate left his community assignment in Rapid City Wednesday and has been placed on escape status.

Trump's tax returns are handed over to House Committee

Trump's tax returns are handed over to House Committee