“Usually when we say salmon and South Dakota in the same sentence, people are kind of confused,” said Dylan Gravenhof, a fisheries biologist with South Dakota Game, Fish and Parks.

The agency that manages the state’s recreational and outdoor resources has been stocking salmon in Lake Oahe since the early 1980s, providing a unique fishing opportunity for the region.

“Not many people know you can catch salmon in the Midwest,” Gravenhof said. “You think it has to be a coastal thing.”

Found naturally in the northern Pacific Ocean and Pacific Northwest, Chinook salmon thrive in the deep, cold waters of Lake Oahe, an artificial reservoir that stretches for 231 miles from Oahe Dam near Pierre to Riverdale, North Dakota.

South Dakota Game, Fish and Parks stocks about 300,000 young Chinook salmon there each spring – as well as a smaller number of Atlantic salmon – and the fish can grow to 30 pounds or more within three or four years.

They’re a big hit with anglers who are in the know.

“There’s definitely a lot of interest. When the fish are biting, people come out of the woodwork to target them,” Gravenhof said.

Other predators are looking for the succulent salmon, too. Smallmouth bass, walleye, northern pike and adult salmon all pose a threat to the juvenile fish after they’re transported to Lake Oahe from the Cleghorn Springs hatchery in Rapid City and McNenny hatchery in Spearfish.

It’s up to Gravenhof to protect the state’s investment.

In addition to his full-time job, Gravenhof is pursuing a master’s degree in biology from the University of Nebraska at Kearney.

That’s where he reconnected with associate professor Melissa Wuellner, a fellow fisheries biologist who taught him as an undergraduate student at South Dakota State University.

Together, they recently launched a research project that uses sound-emitting acoustic tags to keep tabs on Chinook salmon in Lake Oahe.

The tiny tags – each about 13 millimeters long and 5 millimeters wide – contain even tinier batteries that allow them to transmit a high-frequency “ping” every two minutes. They’re surgically implanted at the hatchery and tracked using unique ID numbers.

Once the tagged salmon are released, their movements are monitored by underwater receivers that are continuously “listening” for the fish or by boat using a hydrophone that picks up the signals. By tracking the fish in real time, the researchers can determine where the salmon go and what types of habitat they prefer.

“This gives us a whole new look at what happens to these fish following stocking,” said Wuellner, who holds a doctorate in wildlife and fisheries science from South Dakota State.

Historically, South Dakota Game, Fish and Parks has relied on coded wire tags that didn’t provide any information until the fish were recaptured, either by anglers or by state officials collecting eggs each fall.

“That’s the drawback of the coded wire tags. We put those tags in when they’re a juvenile and we never see those fish again until three to four years later,” Gravenhof said. “There’s a big gap in there when we don’t know what those fish are doing. With acoustic tags, we can see what happens to these fish immediately after they’re in the water.”

The new tags offer one more major benefit. They’re coated in a special polymer membrane that dissolves in stomach acid. If a tagged fish is eaten by a predator, a different signal is sent to the receivers. It’s the first time South Dakota has used this technology.

“Previously, if a predator ate a tagged fish, that predator would retain the tag for a little while. And that predator is still moving, so you think the fish you originally tagged is still alive. But in reality, you’re now tracking something you didn’t intend to track at all,” Wuellner explained.

Gravenhof speculates many of the Chinook salmon stocked at Lake Oahe are eaten shortly after they’re released, so this is important information to have.

The joint research project will help South Dakota Game, Fish and Parks answer a number of questions related to salmon stocking. Among them, where are the best locations to release salmon? What’s the ideal size? Can they use other fish to satisfy predators? Even the type of feed used at the hatchery could impact salmon survival rates.

“We have a lot of ideas for different stocking strategies that we want to try that might increase the overall survival of our stocked fish, but before we try any of those, we need something to compare the success to,” Gravenhof said. “We can’t really evaluate other strategies if we don’t know exactly what’s going on now.”

The UNK graduate student placed acoustic tags inside 50 salmon released earlier this month, and he’ll tag another 50 fish next spring. Each tag costs about $600 and functions for around five months.

Gravenhof and Wuellner will begin analyzing the data this fall.

“We should get huge databases of information back from this,” Gravenhof said.

Along with answering their own questions, the research results will be presented in academic publications and at professional conferences, allowing other agencies to better manage their resources.

“That’s the cool thing about science,” Wuellner said. “The sharing of information can improve angling opportunities across the country.” 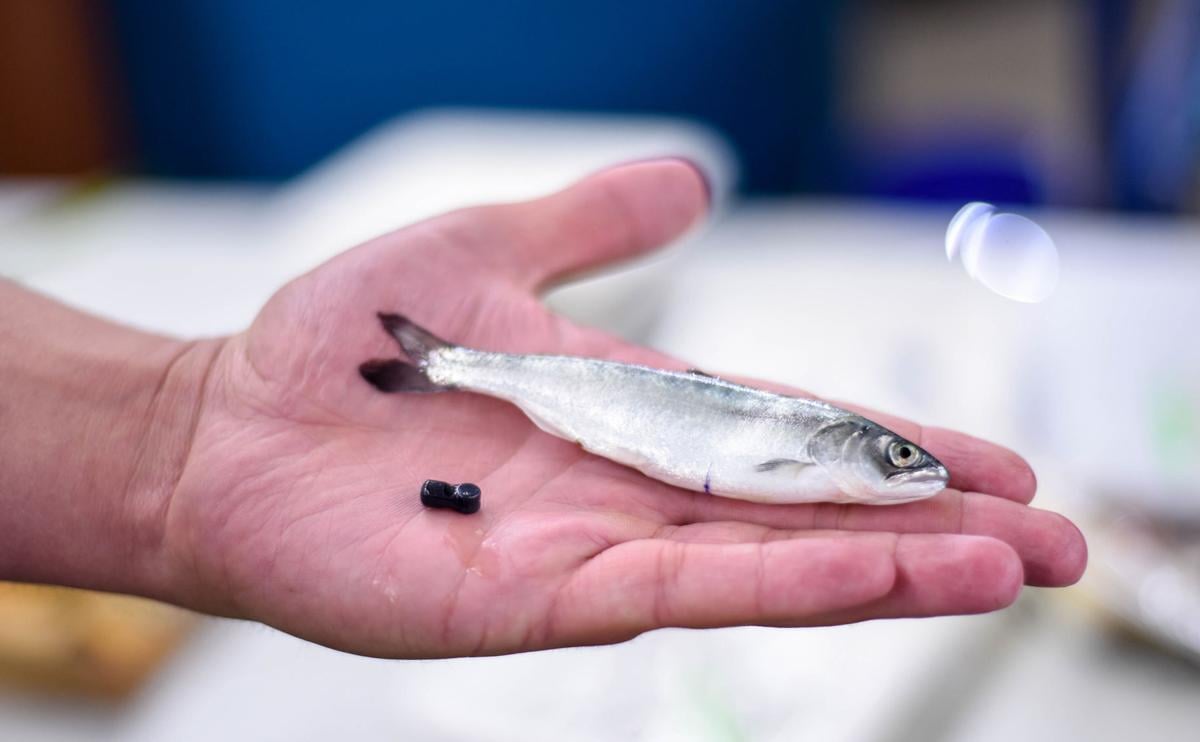 The University of Nebraska at Kearney and South Dakota Game, Fish and Parks are collaborating on a research project that uses acoustic tags to monitor Chinook salmon stocked at Lake Oahe. The tiny tags transmit a high-frequency “ping,” allowing researchers to track the fish using a hydrophone and underwater receivers. 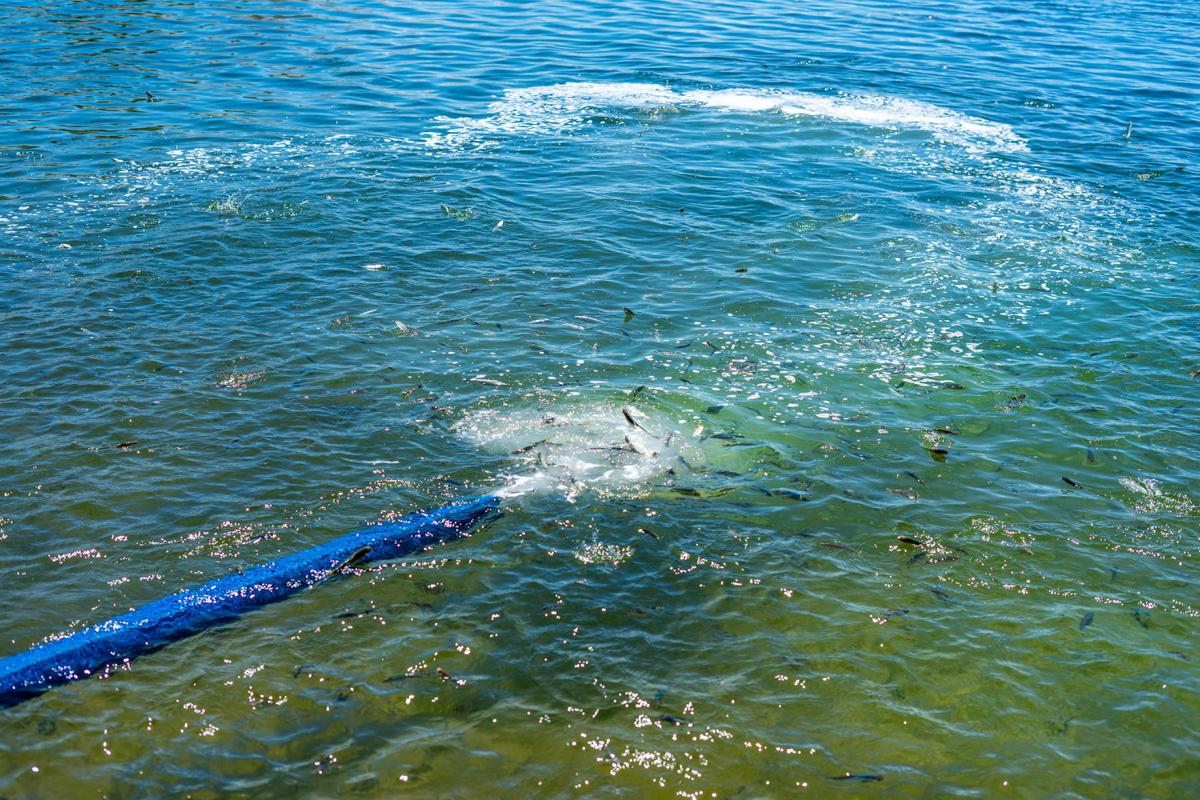 Juvenile Chinook salmon are released into Lake Oahe earlier this month. South Dakota Game, Fish and Parks stocks about 300,000 salmon there each spring. 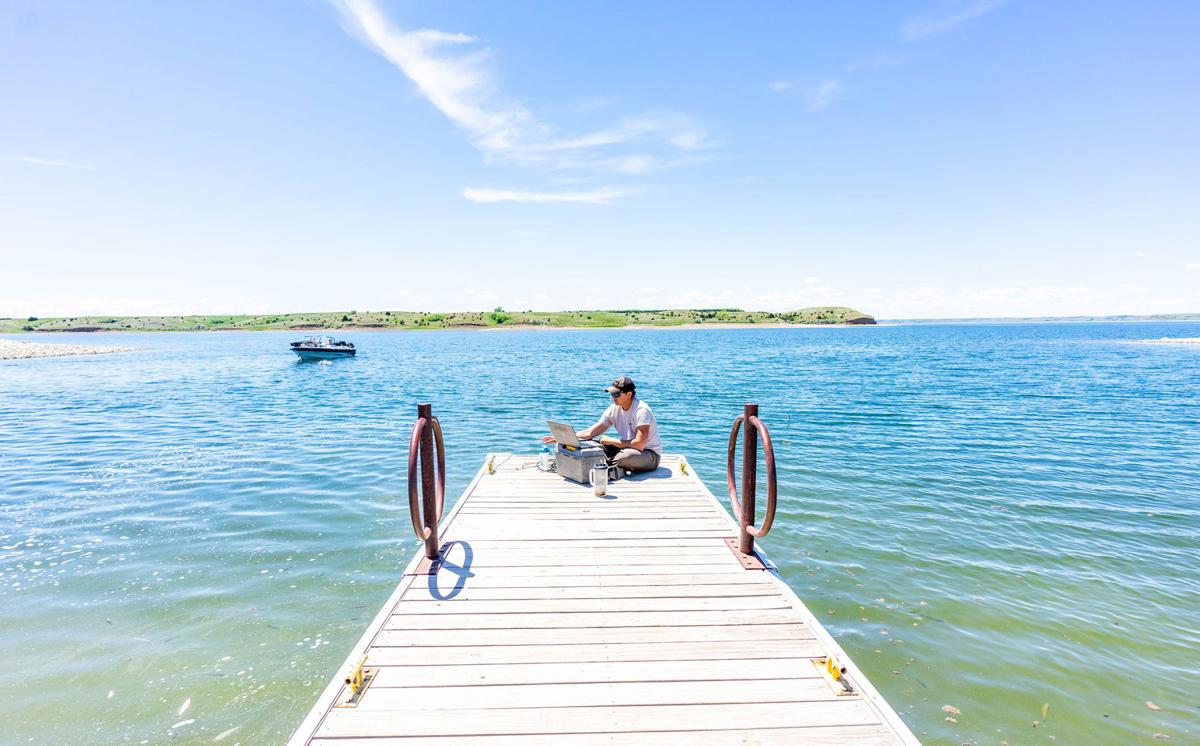 Dylan Gravenhof, a fisheries biologist with South Dakota Game, Fish and Parks, uses a hydrophone to “listen” for tagged fish as they’re released into Lake Oahe earlier this month. 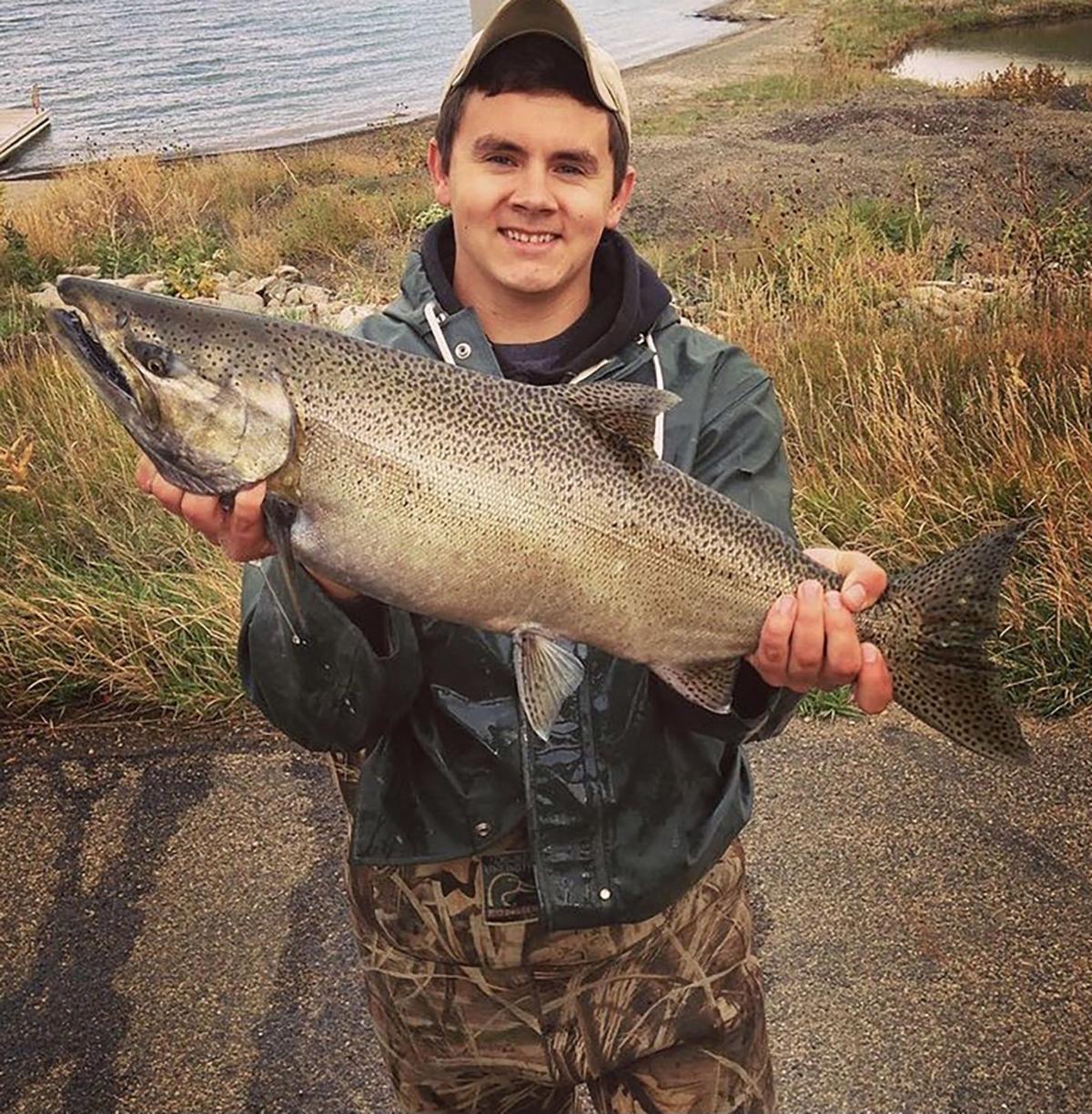