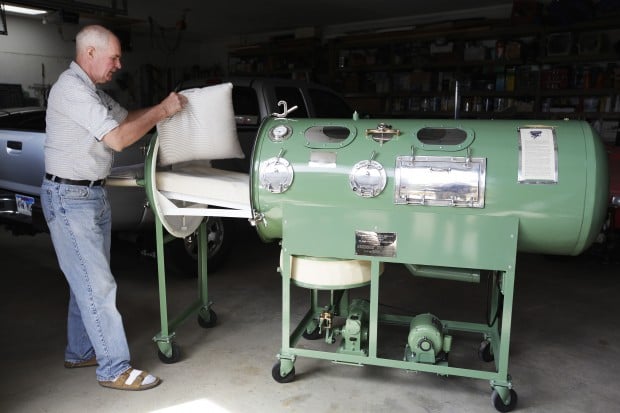 Larry David pulls out the bed in South Dakota’s first iron lung, which he had restored at a cost of $10,500. The iron lung was used in the Lead-Deadwood area and was stored at the old Homestake gold mine's hospital. It was left outside to deteriorate after the hospital was demolished in the 1970s. 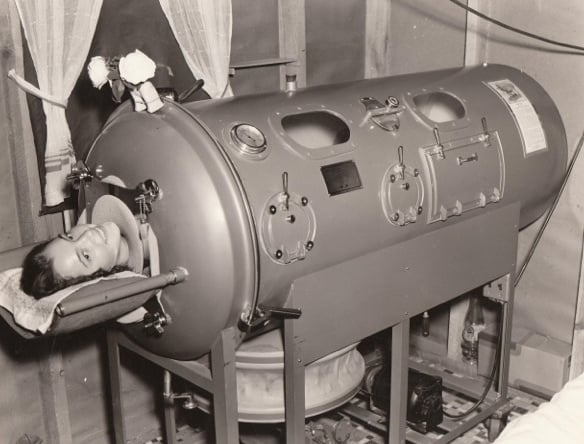 In this August 1940 photo, 17-year-old Vera Junek rests inside the iron lung at her family's Spearfish home. 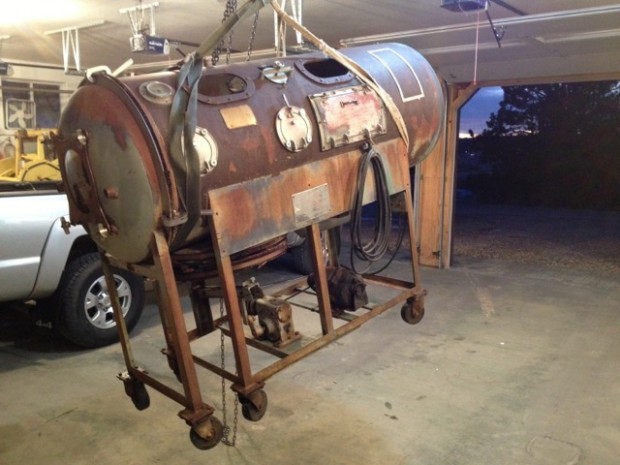 This before photo shows the deteriorated condition of the iron lung when Larry David saved it from a Rapid City construction yard two years ago. 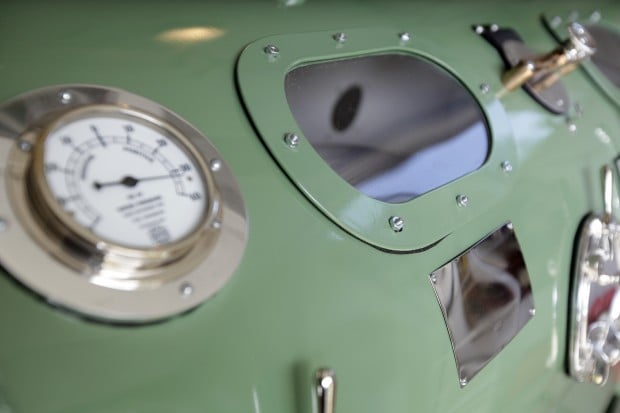 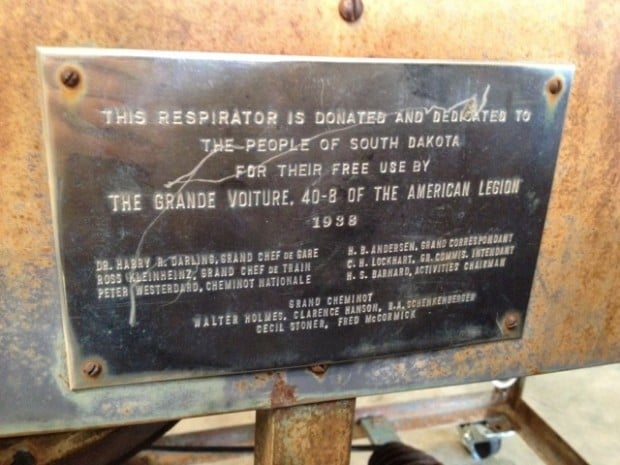 The original 1938 dedication plate on the iron lung was fully restored and features names associated with the Grande Voiture 40-8, a historical American Legion group that began in 1919 and takes its name from the French box cars that could transport either 40 men or 8 horses during wartime.

Joan Chismire cried when she saw the restored iron lung that saved her polio-stricken mother's life back in 1940.

"When the bellows started working, that’s when I started tearing up. It just reminded me of mom," said the Ridgway, Colo., woman who owes her very existence to the first iron lung ever used in South Dakota. Chismire saw the machine in operation on television during an episode of the History Channel's "American Restoration" program that aired this week.

"It means the world to us," she said. "It saved my mom. My brother and I wouldn't be here if hadn't been for the ingenuity of that machine."

The machine is a 1938 Drinker Negative Pressure Ventilator, more commonly known as an iron lung, that Rapid City businessman Larry David salvaged from a Rapid City construction yard two years ago. It had been exposed to the elements since the 1970s, after it was removed during the demolition of the old Homestake Hospital in Lead.

David was told the severely deteriorated iron lung might make a logical candidate for the cable television reality show that features unusual restoration projects done at Rick's Restoration in Las Vegas. "American Restoration" producers thought so, too, and it aired this week in an episode titled, "American Respiration."

"I don't have cable TV, so I had never seen the show," David said from his rural Black Hawk home Tuesday where, after a $10,500 restoration bill, the 500-pound, 6-foot-plus-long iron is stored.

With a fresh coat of green paint, it looks at least as bright and shiny as it must have the day it rolled off the assembly line, with its highly polished aluminum rivets, a completely restored springs and mattress and new bellows. While much of the steel body had to be refabricated, the original light bulb that brightened the interior space for the medical attendants survived intact inside the machine for at least half a century.

Once David knew the iron lung had been accepted for the show, he wanted to learn more about this important piece of western South Dakota medical history. He found plenty.

In the late 1930s, there were three big stories that routinely made newspaper headlines: the Depression, Hitler's aggression and the build-up to World War II, and the polio epidemic. People were terrified of an airborne disease they did not understand that struck so indiscriminately and had no cure.

"This was big news in the Northern Hills when it arrived," he said of the iron lung. David spent days poring over newspaper accounts and hospital archives. "Day after day after day they were preparing for this thing to arrive, and raising money for it and after it got here, demonstrating it to service clubs and doctors. It was a huge novelty and a very big deal."

Delivered in December 1937 to St. Joseph's Hospital in Deadwood, the iron lung arrived before the polio epidemic did, thanks to the foresight of numerous American Legion posts and auxiliaries in the area, including the Grand Voiture 40-8, which bought it for the "free use by the people of South Dakota." The machine cost $1,385 in an era when a new Ford car cost $599, David said.

Seventeen-year-old Vera Junek was one of three people who contracted polio in the summer of 1940, the first victims in the area. Two of them recovered, but Junek did not. As her breathing worsened and her arms became paralyzed, she was the first person to use the iron lung.

Junek would spend nearly a year in the respirator, but she never recovered the use of her arms, her daughter said. Junek went on to marry and raise two children, and she quickly became adept at using her feet instead of her hands to write, paint, do needlepoint and any other task she wanted to accomplish. Vera Junek Heileson died at age 63 in 1988 from complications related to post-polio syndrome, her daughter said.

Like many people born after Jonas Salk invented the polio vaccine, which eradicated the epidemic with the immunization of nearly every child in America by 1955, Chismire has never seen a real iron lung. She and her brother, Ed Heileson, are history buffs and fans of the show and they watched the May 7 "American Respiration" episode. She was surprised by the iron lung's green color, since the only photographs she ever saw of her mother in it were in black and white. And she's excited to see it in person soon.

"I can’t wait to go see it, and my brother as well," she said. "We were just so touched that he would take the time to do the history on this."

At some point, the machine was moved from the Deadwood hospital to the one in Lead where Homestake provided medical care to its employees. Chismire remembers family members telling the story of how her mother was transported to St. Luke's Hospital in Hot Springs inside the iron lung on a flatbed trailer, ostensibly for further treatment.

"This particular iron lung was so well-made. If the electricity failed, it could quickly be converted to a hand crank," she said.

Several family members took turns pumping the bellows by hand during the trip, stopping in various towns along the way to plug the iron lung into an electrical outlet to give them a break, Chismire said.

David believes the restored iron lung can provide a window on medical technology of the 1930s and will help people understand the significance of the polio epidemic in the Black Hills and throughout the world. He plans to make it available for display, perhaps at fundraising efforts for the ongoing restoration of the Homestake Opera House, which was the location for much of the 1930s fundraising for the iron lung.

David hopes his iron lung, perhaps the only one of its make and model that remains in the world, will one day reside in a medical museum or perhaps in the lobby of a cardiopulmonary hospital or institute. There were thousands of the machines manufactured, but most were crushed for scrap metal, and wide-scale production stopped in 1954, David said.

With about $17,000 invested in the machine to date, he'd like to sell it but has no idea what it is worth.

"It's either worthless junk, or its priceless," he said. "It's certainly a priceless piece of western South Dakota history."

Check the History Channel listings for rebroadcasts of "American Respiration" or watch it online at www.history.com/shows/american-restoration

Marvel’s Hero Project is out to prove that superheroes live among us. One of those superheroes is activist, public speaker and high school stu…

Larry David pulls out the bed in South Dakota’s first iron lung, which he had restored at a cost of $10,500. The iron lung was used in the Lead-Deadwood area and was stored at the old Homestake gold mine's hospital. It was left outside to deteriorate after the hospital was demolished in the 1970s.

In this August 1940 photo, 17-year-old Vera Junek rests inside the iron lung at her family's Spearfish home.

This before photo shows the deteriorated condition of the iron lung when Larry David saved it from a Rapid City construction yard two years ago.

The original 1938 dedication plate on the iron lung was fully restored and features names associated with the Grande Voiture 40-8, a historical American Legion group that began in 1919 and takes its name from the French box cars that could transport either 40 men or 8 horses during wartime.