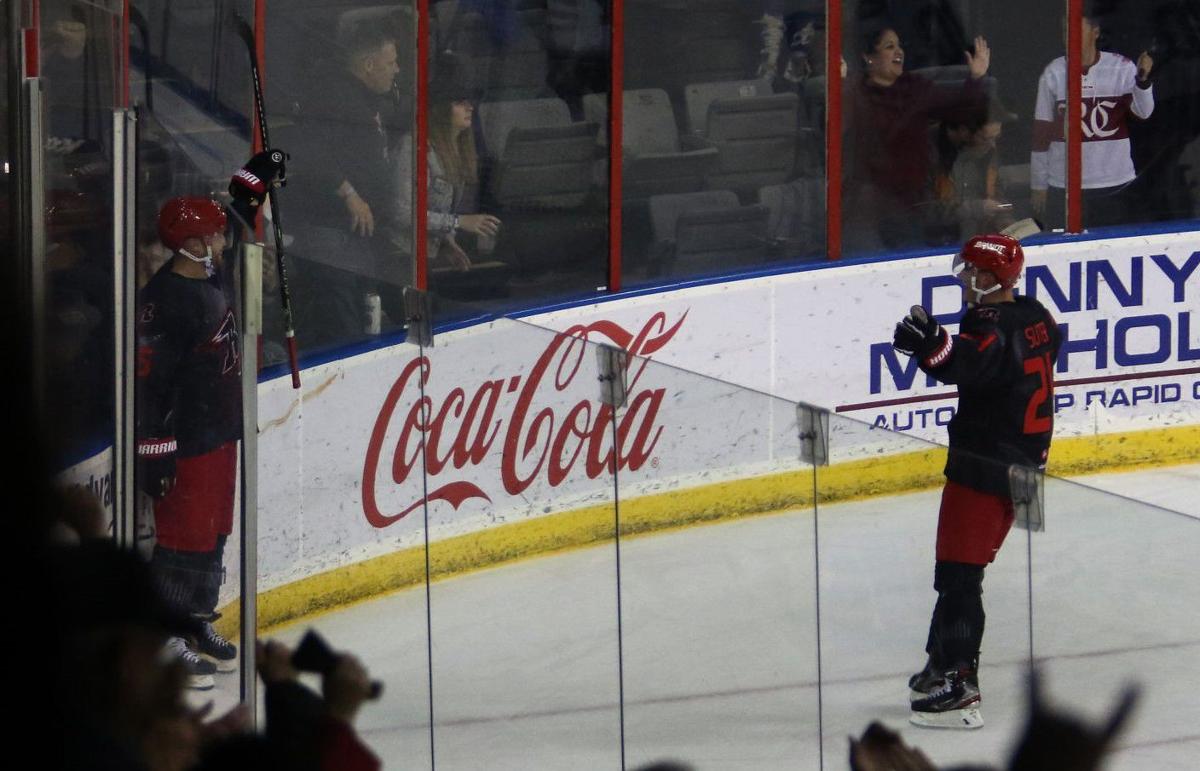 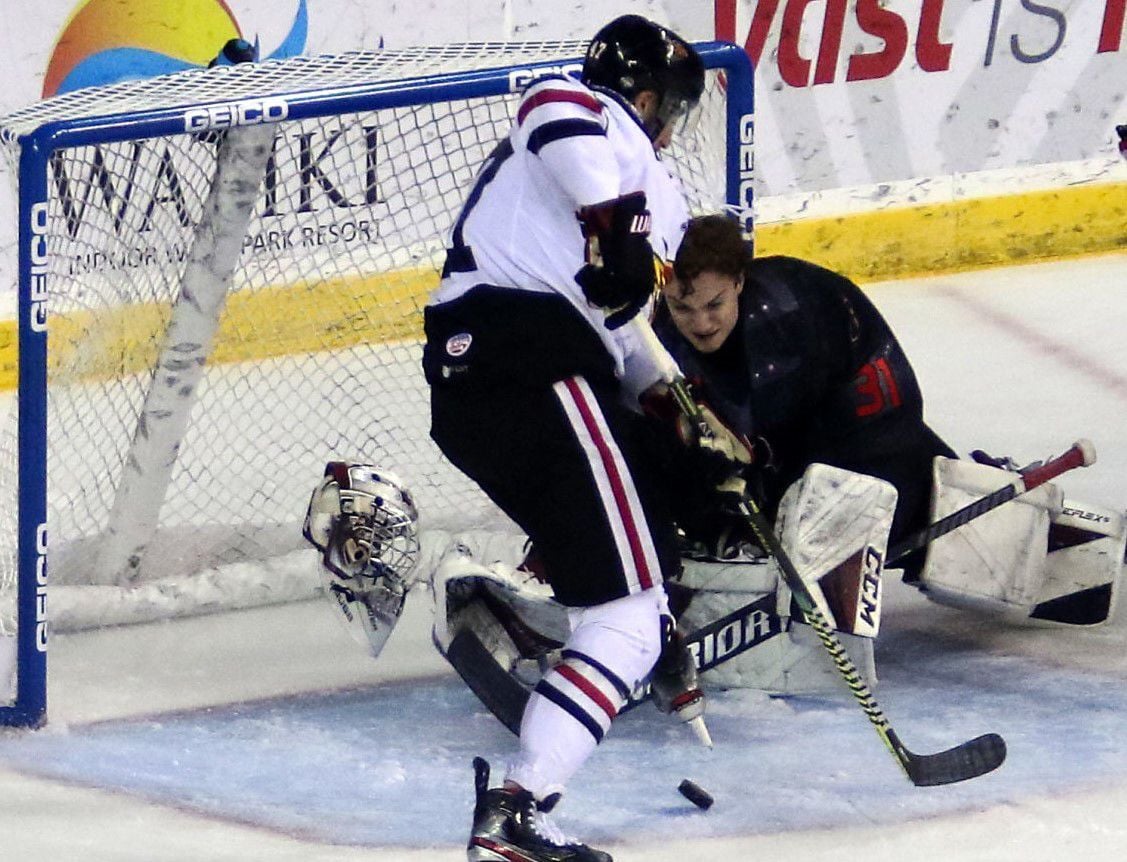 After an Indy Fuel forward knocked his helmet off with his stick, Rush goalie David Tendeck makes a diving save without his helmet for Rapid City. Tendeck made 29 saves in the win.

The mainstays of the Rapid City Rush’s offense this season were still in full force Friday night, but it was the irregulars who got the job done.

With the help of Tyson Empey, John Albert and Eric Israel, just 25 points between them this year entering the game, the Rush battled back from a pair of deficits against the Indy Fuel and tallied two unanswered goals for a 3-2 victory at Rushmore Plaza Civic Center to take a 2-0 series in the four-game set.

“We’re just playing every game like it’s our last. We know our backs are against the wall, and we’ve got to keep digging and keep working to try and get into the playoffs,” Empey said. “We love playing here in our city, we’re a tight group and we’re really not ready for the season to be over.”

The win gives Rapid City (32-28-4) three straight with seven to go, but the victory failed to close the gap on the Utah Grizzlies for the fourth and final playoff spot in the Western Conference. The Grizzlies topped the Allen Americans 4-1 to maintain a 0.039 percentage points lead in the standings.

The Rush finished with just 18 shots, their second fewest in a game this season, but are 2-1 when failing to reach 20 shots.

“We battled back all night, being down by one goal in the first and then in the second. It’s a playoff-style atmosphere, the crowd was into it and it’s always fun to play in front of an atmosphere like that,” Rush head coach Daniel Tetrault said. “To get the win feels great, and we’ve just got to keep going one game at a time.”

Dave Tendeck weathered a 31-shot storm and received much-needed assistance from his defensemen — something largely absent from Wednesday’s win — stopping 29 shots to break .500 and improve to 11-11-0. The rookie netminder is 11-7-0 since grabbing his first career victory Jan. 16.

“He’s calm and cool and collected back there,” Tetrault said. “He’s just playing with a lot of confidence, a lot of poise. He’s not playing nervous, and he did a great job playing the puck as well tonight and making those big stops when we needed them.”

Tendeck made a pair of big saves in the first period, a stretching kick-save to stop a wrap-around try and a diving save that caused his helmet to fly off, to keep Indy (31-22-7) off the board. The Fuel eventually did notch a goal, however, on a rebound by Matt Marcinew past the glove-side of Tendeck at 17:06, to take a 1-0 lead.

The Rush, unsurprisingly outshot 9-5 in the opening frame, went 10-10 in second period and leveled the contest at 9:54 when Tyler Coulter picked up a loose puck in and maneuvered past a defender before burying a backhander.

.@tcoulter23 nets it to get us on the board! pic.twitter.com/vNo6okeAen

Indy retook the lead less than four minutes later when Dmitry Osipov sniped a shot from the point that sailed through traffic and past a screened Tendeck at 13:22, but Rapid City answered on a one-timer from Albert, who fired a drop-pass from Israel short-side on the stick-side of Fuel netminder Sean Romeo at 18:40 to earn his first goal in a Rush uniform.

“That was his best game. He won a lot of faceoffs for us, had a big goal and he’s just a smart player,” Tetrault said of Albert. “He’s got his legs under him. He was out for a while with an injury, but he’s got that veteran presence in the locker room as well.”

First in a red uniform for ALBERT! pic.twitter.com/BA5CGm3oPh

Israel picked up just his sixth assist of the season, playing on the front lines with fellow defenseman Charlie Curti and in replacement of Hunter Garlent, Stephen Baylis, Mike Hedden and Andrew Sturtz, who are all injured.

“We were without Garlent and Baylis tonight and they stepped up big time,” Tetrault said. “They did a tremendous job.”

More than 17 minutes of the third period was played without a go-ahead score, but Rapid City eventually moved in front when Empey threw a shot on net that bounced off Romeo and went in to make it 3-2 with 2:58 remaining in regulation.

It was just the fifth goal potted by Empey this season.

“It was nice to see him get rewarded on that game-winning goal,” Tetrault said. “He’s been working so hard, fighting for the team, hitting, blocking shots. For a guy like that to get a game-winning goal, we were really happy.”

Romeo was pulled for an extra attacker with 1:34 to play but Tendeck and company kept the Fuel out of the net. The Rush managed just three shots on target in the final frame.

“That last two minutes was unbelievable,” Tetrault said. “The guys sacrificing their bodies, blocking shots when (Indy) had pulled their goalie.”

Game 3 of the series starts at 7:05 p.m. Saturday at Rushmore Plaza Civic Center. Rapid City is 2-3-0 in the third game of a series this season when winning the first two.

After an Indy Fuel forward knocked his helmet off with his stick, Rush goalie David Tendeck makes a diving save without his helmet for Rapid City. Tendeck made 29 saves in the win.