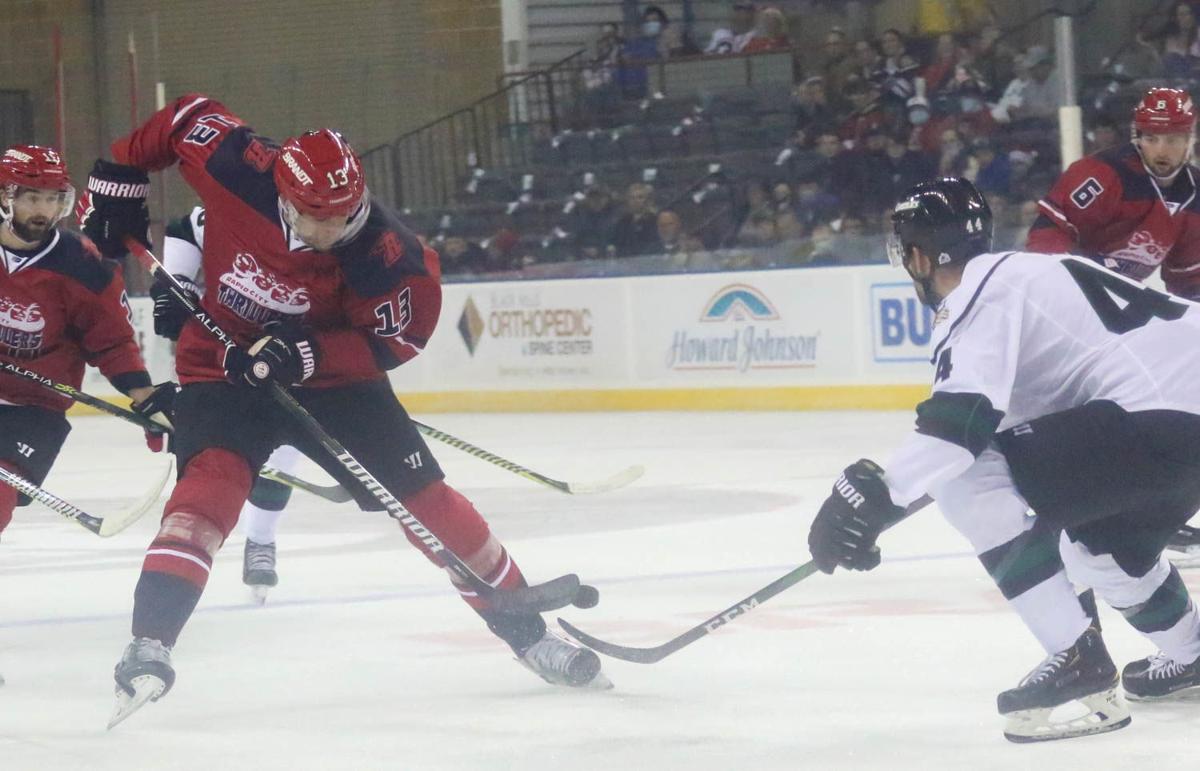 Forward Avery Peterson attempts to get the puck past defenseman Alex Lepkowski during the first period of the game Saturday night. 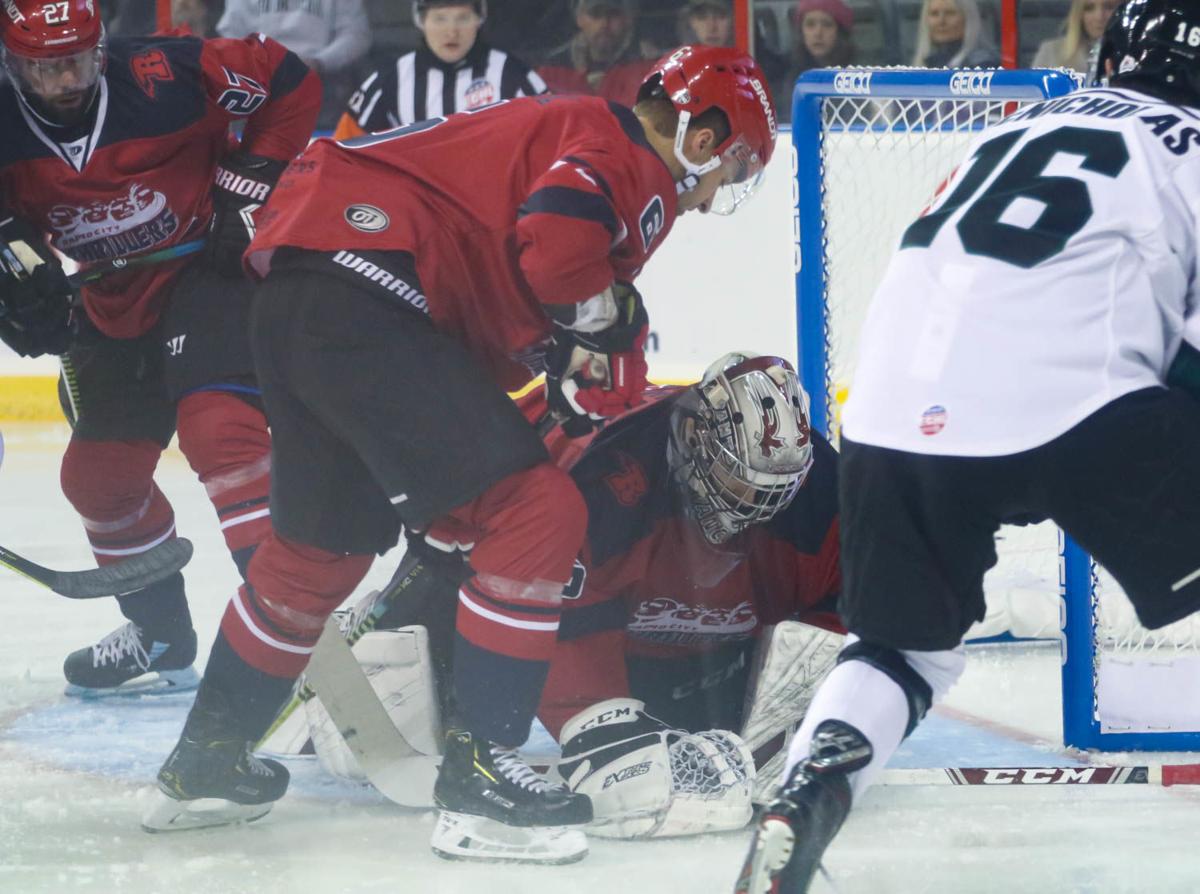 Rookie goaltender Dave Tendeck catches the puck before it reaches the goal during the game against the Utah Grizzlies Saturday night. 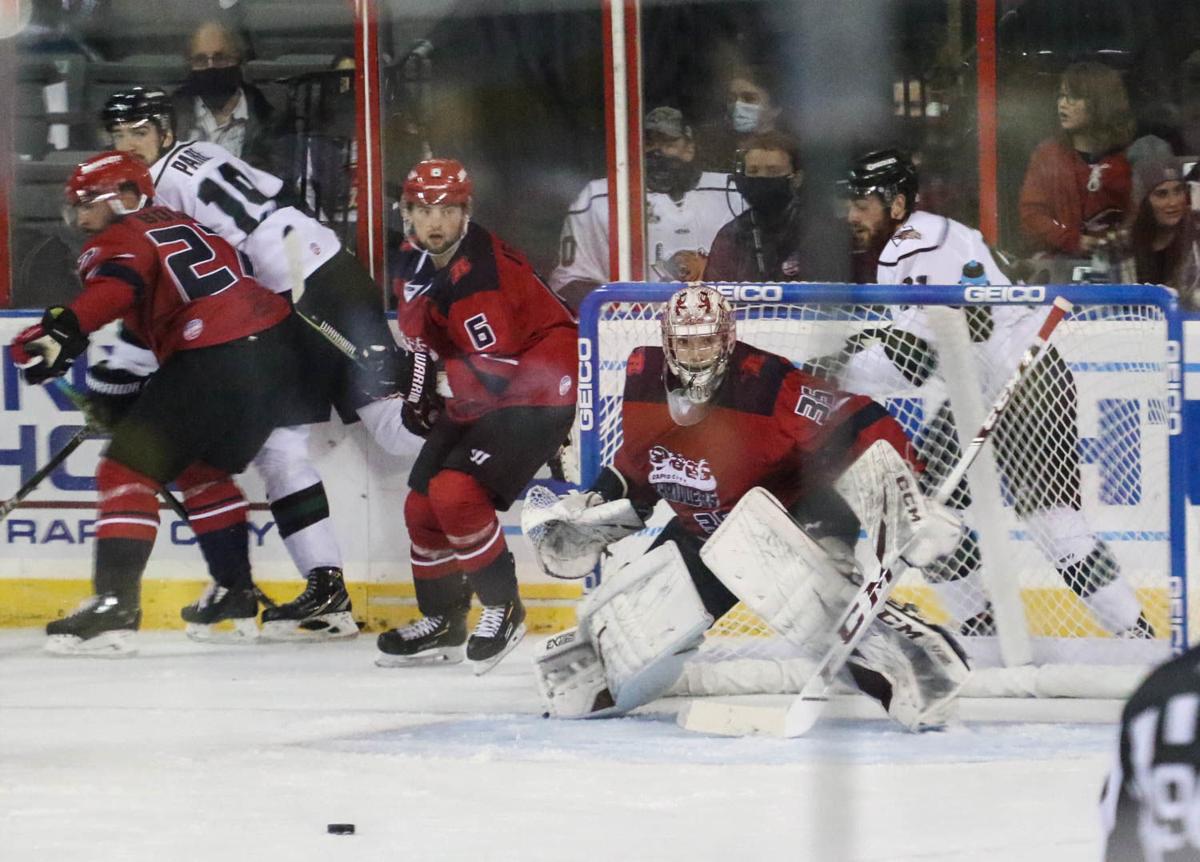 The Rapid City Rush watch players approach the puck during the first period against the Utah Grizzlies Saturday night.

After a strong offensive performance in their season opener Friday where they put half a dozen shots into the net, the Rapid City Rush mustered just one tally in Game 2.

The contest was tied for the majority of the first 40 minutes, as goals scored by both teams in the opening period came within 24 seconds of each other. The deadlock was broken midway through the third as the Utah Grizzlies notched a pair of goals in just over a minute to come away with a 3-1 victory Saturday and split the series at Rushmore Plaza Civic Center.

“Utah came out to play. They wanted it tonight,” Rush head coach Daniel Tetrault said. “You have to give credit to them; they battled, they won every one-on-one battle. We thought maybe it was going to be easy but they made it hard on us and were well-prepared.”

Jack Suter, a former rookie tryout who earned a spot on the squad this week, earned Rapid City’s (1-1-0) lone goal and his first professional goal, which was assisted by rookies Griffin Luce and Jake Wahlin. Dave Tendeck made his professional hockey debut in net and saved 31 shots.

Diego Cuglietta and Brayden Gelsinger collected a goal and an assist each for Utah (1-1-0), and Michael McNicholas added a goal.

“I think we played two good periods, we just needed to keep the pace for the third one,” forward Cedric Montminy said. “It was a good start, but we just need to learn to keep the pressure on and stay on the puck every night.”

Sporting Rapid City Thrillers jerseys in paying homage to the defunct semi-pro basketball team from the late 1990s, even going by “the Thrillers” for the evening, the Rush killed an early slashing penalty on Brandon Fehd, and soon after got on the scoreboard when Suter deflected in a blue-line wrister from Wahlin with 13:02 to play in the opening period.

Rapid City’s lead lasted less than 30 seconds as the Grizzlies responded with an equalizer from Gelsinger with 12:38 left.

In the final three minutes of the first, Peter Quenneville put a shot on goal that bounded off the goalie’s face mask, Joe Sides rattled a shot off the crossbar and Mark Auk was tripped up while preparing for a shot but no call was made.

Tendeck, who stopped a powerful one-timer in the first frame, saved a point-blank shot and a one-on-one opportunity by the Utah offense in the second to keep it a tie game heading into the third period. Rapid City put just 16 shots on net through the first 40 minutes, finishing with 22, while their opponent managed 24 in the period and 35 overall.

“Tendeck played great. He kept us in the game,” Tetrault said. “He made some big saves, we just couldn’t find anything offensively tonight.”

The Rush picked up their first and only power-play opportunity of the night 3:16 into the third period when Matt Abt was nabbed for hooking. The man-advantage was quickly quelled as Tyler Coulter was flagged for interference following a faceoff just four seconds later, and the two squads went on to play a scoreless 4-on-4 for the next two minutes.

The Grizzlies finally broke the stalemate with 11:42 to play in regulation when Cuglietta found the back of the net on a left-handed wrister. McNicholas then drove the puck to the net and celebrated the score before the referees, initially waving it off, elected to review the play and overturned the call with 10:34 left.

Suter had a chance at another goal inside 10 minutes, wrapping a shot around the goalkeeper, but the opposing netminder kicked away the puck at the last second.

Sides was called for slashing with 3:20 to play but Utah failed to benefit from it. Tendeck was pulled from the two-score contest for a 6-on-5 with 35 seconds left.

“It’s a learning experience. We split the series, and we’ve got to move on,” Tetrault said. “I just felt that Utah was more ready to play tonight.”

Forward Avery Peterson attempts to get the puck past defenseman Alex Lepkowski during the first period of the game Saturday night.

Rookie goaltender Dave Tendeck catches the puck before it reaches the goal during the game against the Utah Grizzlies Saturday night.

The Rapid City Rush watch players approach the puck during the first period against the Utah Grizzlies Saturday night.