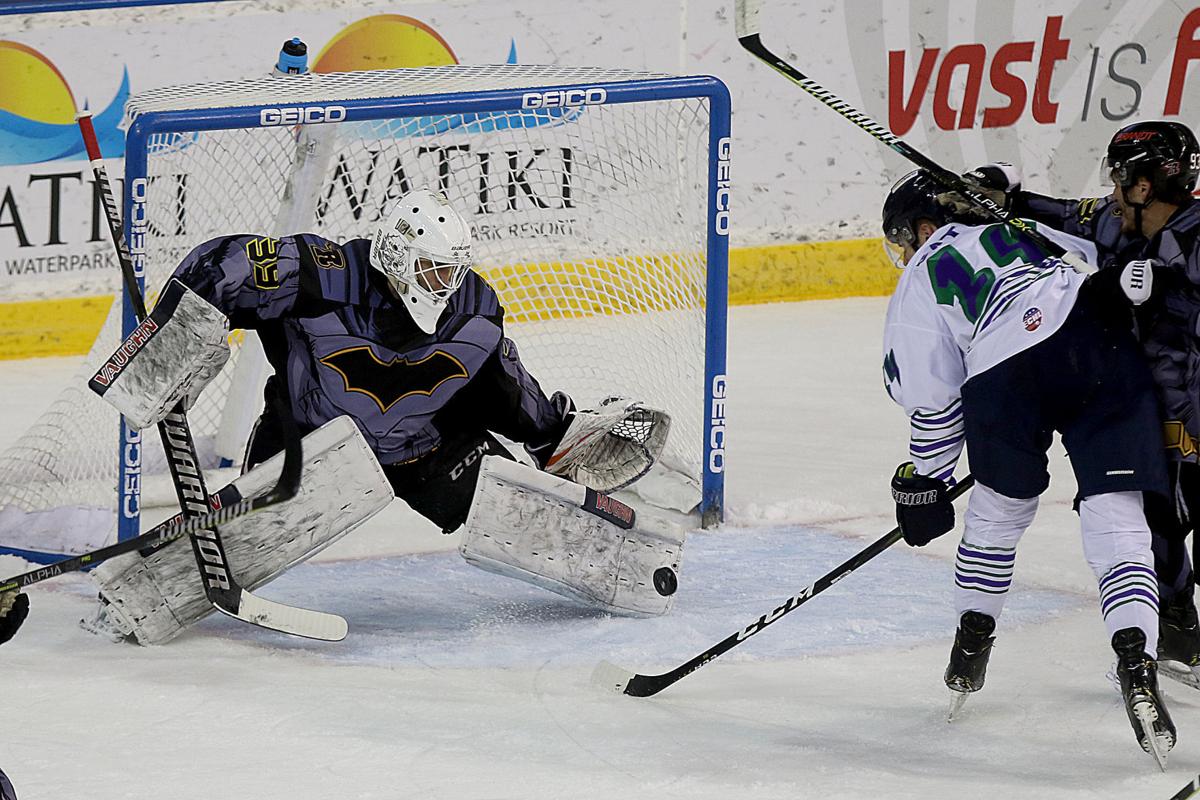 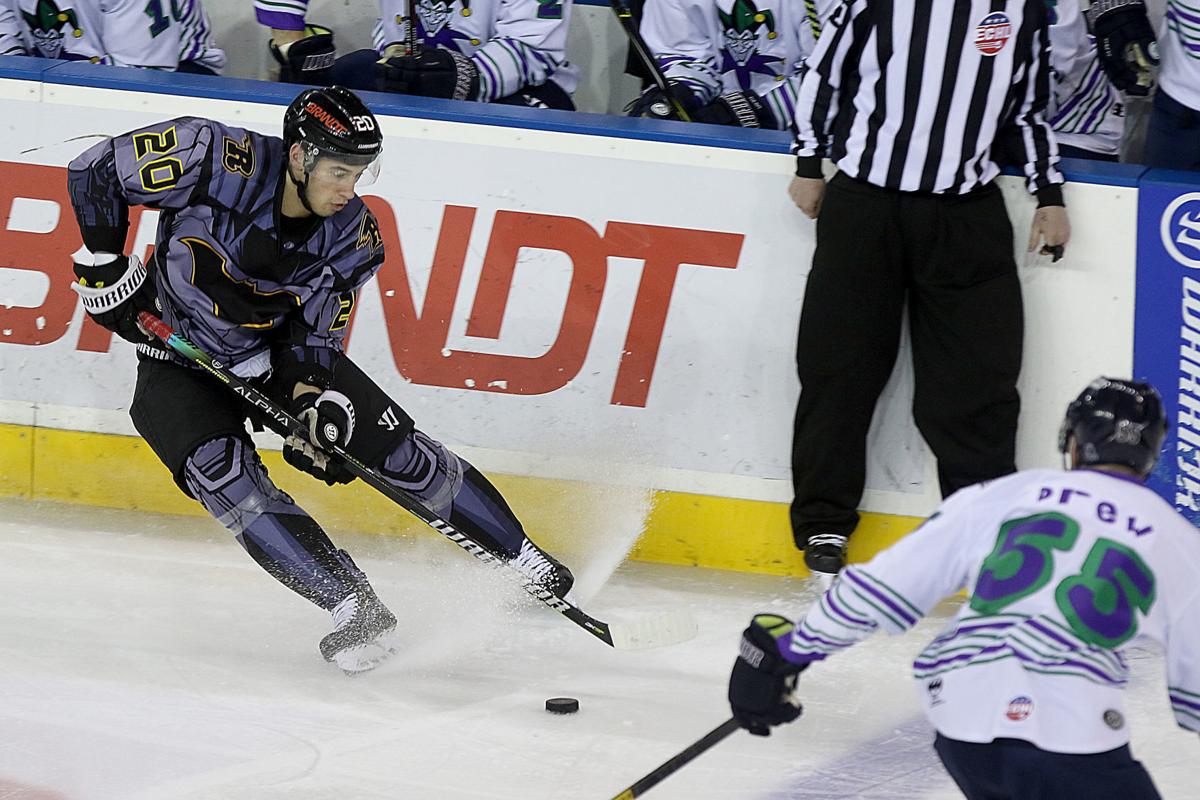 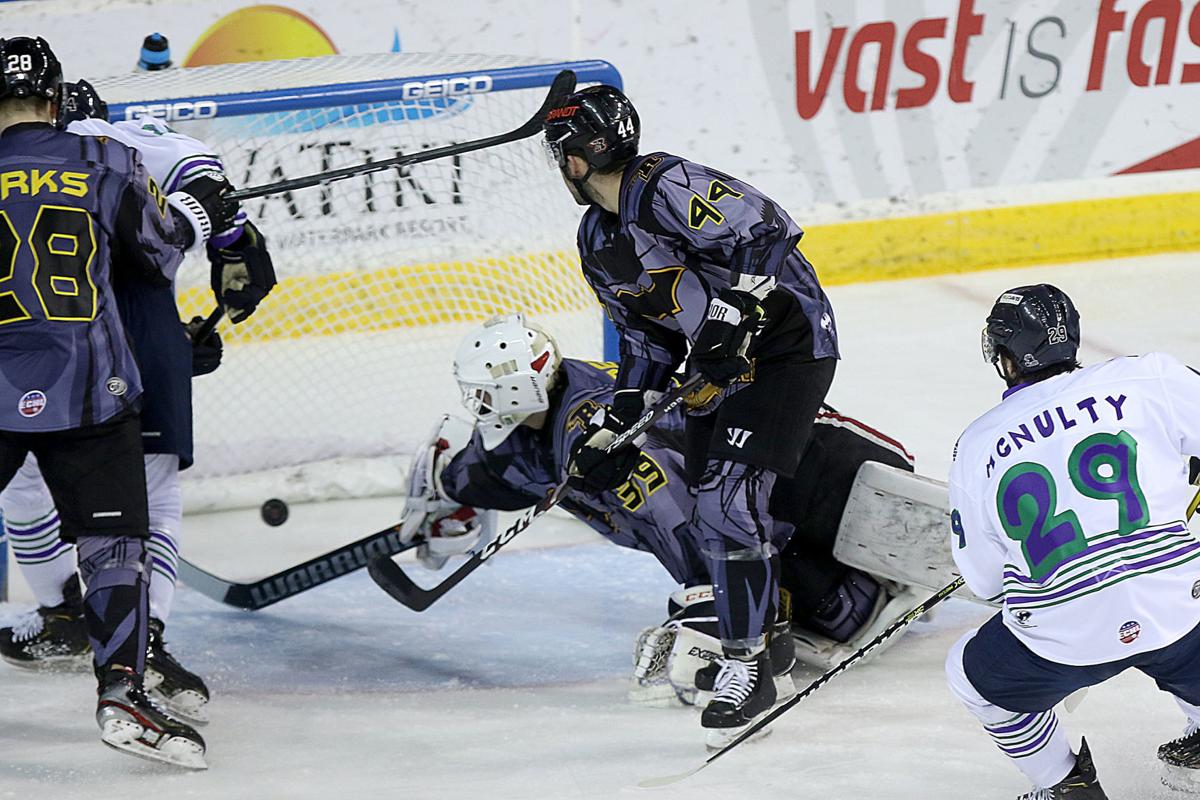 Rapid City Rush goaltender Gordon Defiel (39) tries to make a save on the close-range shot by Tulsa forward Brent Gates Jr., left, during the Rush’s ECHL game against the Tulsa Oilers on Saturday at the Rushmore Plaza Civic Center Ice Arena.

The Rapid City Rush, a night removed from a deflating 6-3 loss to the Tulsa Oilers, rebounded Saturday with an important 8-4 win to even the weekend series at a game each and earn a valuable two points in the chase for the ECHL playoffs.

Outshot 46-27, the Rush still came away with the win, powered by the goaltending of Gordon Defiel, the hat trick by Tyler Coulter, a two-goal, three-point night from Keeghan Howdeshell, two goals from Brennan Saulnier and three assists by Peter Quenneville.

Defiel backstopped the Rush on a night where the Oilers kept play in Rapid City’s end of the ice for long stretches. Defiel, playing in his 13th game with the team, finished with 42 saves and gathered his fifth win of the season.

“He’s been playing great since I picked him up from Indy,” Tetrault said of Defiel. “He’s playing with a chip on his shoulder, and he’s just playing great.”

The eight-goal game tied a season high for the Rush. Rapid City also scored eight times during an 8-2 defeat of Wichita on Jan. 15. In fact, it’s the second straight time the Rush have won by an 8-4 score on Feb. 29. The last coming in 2012 when Rapid City knocked off the Arizona Sundogs that leap year game.

“Personally, I love games like that,” Coulter said of the 8-4 game. “It’s back and forth, and it keeps the fans involved. That’s what’s big for me.

“That was a huge comeback game for us. Not only redemption for last night but in the standings. We need that win.”

Tetrault changed up his lines leading into Saturday’s game, and Coulter was one of the beneficiaries. He was paired with Saulnier and Dante Salituro, two of the Rush’s more fluid and speedy skaters.

“Saulnier can fly like I’ve never seen, and he and Salitaro were feeding off each other,” Coulter said. “They’re two quick guys. I was just waiting in the background for stuff to open up.”

The Rush struck first when Howdeshell took a feed from behind the net from Tanner Karty and beat Tulsa goalie Devin Williams stick-side past his right skate. The goal, Howdeshell’s 11th of the season, came 2:14 into the opening period.

Defenseman Ryker Killins, who fed the puck around the boards to Karty, got the other assist, his 15th of the season. Karty got his sixth assist and 12th point in 27 games.

The Oilers, who held a 16-7 advantage in shots on goal over the opening 20 minutes, tied the game at 1-1 when Tulsa forward Gates scored a power-play goal just 14 seconds after Rapid City’s Garrett Milan was sent off when the Rush were assessed a two-minute bench minor. J.J. Piccinich and Miles Liberati assisted on Gates’ goal, his seventh of the season.

Oiler assistant captain Ryan Tesink was sent off for tripping at the 14:16 mark, and the Rush wasted no time taking advantage. Coulter set up in front of Williams and knocked a rebound off a Howdeshell shot home to stake Rapid City to a 2-1 lead 6:32 into the second period.

Matteo Gennaro made it 3-1 Rush five minutes later when he checked Tulsa defenseman Steve Kaunisto behind the Oilers net, stepped out from behind the net to Williams’ left and beat him with a one-timer past his glove. Assists on Gennaro’s goal at the 11:22 mark, his second in nine games with Rapid City, went to Quenneville and Chris Leibinger.

Coulter got his second goal of the night when Howdeshell one-timed a slapshot on goal and Williams gave up a rebound that ended up on Coulter’s tape. Coulter lifted the puck past a sprawling Williams to make it 4-1 Rush with 2:42 left in the second period.

Defiel came up big twice late in the second period with the Oilers skating with a 5-on-3 man advantage after Tanner Karty and Leibinger took minor penalties inside the 2:06 mark.

The Rush goalie skated out to cover space between him and Tulsa forward Ian McNulty, who one-timed a slapshot on goal but into Defiel’s chest. Then off the ensuing faceoff, McNulty got a second look and his slapshot from the point hit Defiel in the right shoulder, keeping the score 4-1 heading into the second intermission.

Howdeshell scored a nifty, shifty goal 1:43 into the third period to put the Rush up 5-1. Howdeshell scooped the puck up onto the blade of his stick as he skated behind the Oilers’ goal before wrapping the puck around and tucking it into the net over Williams’ right shoulder and just under the goal’s crossbar.

Tulsa answered right back with Brent Gates Jr. came in along on Defiel and beat him glove side to cut Rapid City’s lead to 5-2 just 2:38 into the final period.

Coulter completed the hat trick less than a minute later, skating in from Williams left and snapped home his third goal of the game — and 20th of the year — to run the Rush’s lead back to four at 6-2 3:31 into the third period. Saulnier and Salituro assisted on the goal.

Gates scored his second goal of the period, matching Coulter’s hat trick, when he beat Defiel past his glove hand with a tough-angle slapshot from the faceoff circle to cut Rapid City’s lead to 6-3 with 12 minutes to play in the game.

Saulnier pushed the Rush up 7-3 when he took possession of the puck in the neutral zone, charged up the right boards, split two Tulsa defenders and snuck the puck under Williams. Assists went to Karty and Eric Israel.

Charlie Sampair scored with 5:24 to play when he redirected a wrist shot from the point by defenseman Steven Ruggiero. Moynihan also assisted on Sampair’s counter, which cut Rapid City’s lead to 7-4.

Matteo Gennaro scored his second goal of the game — an empty-netter — at the 17:23 mark pushed Rapid City ahead 8-4.

Rapid City Rush goaltender Gordon Defiel (39) tries to make a save on the close-range shot by Tulsa forward Brent Gates Jr., left, during the Rush’s ECHL game against the Tulsa Oilers on Saturday at the Rushmore Plaza Civic Center Ice Arena.