Rush forward Logan Nelson (28) tries to get the puck around a prone Allen defenseman in the second period Wednesday night. 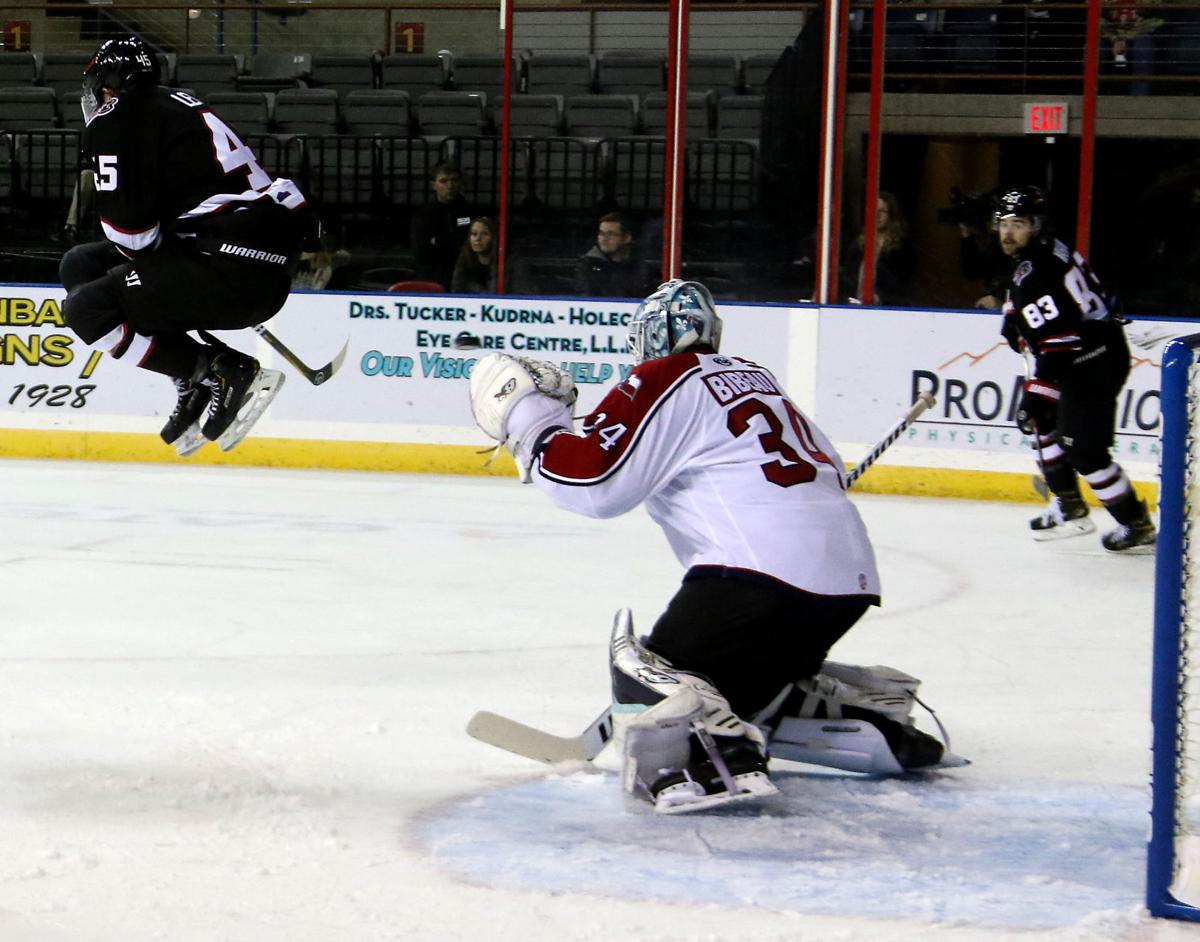 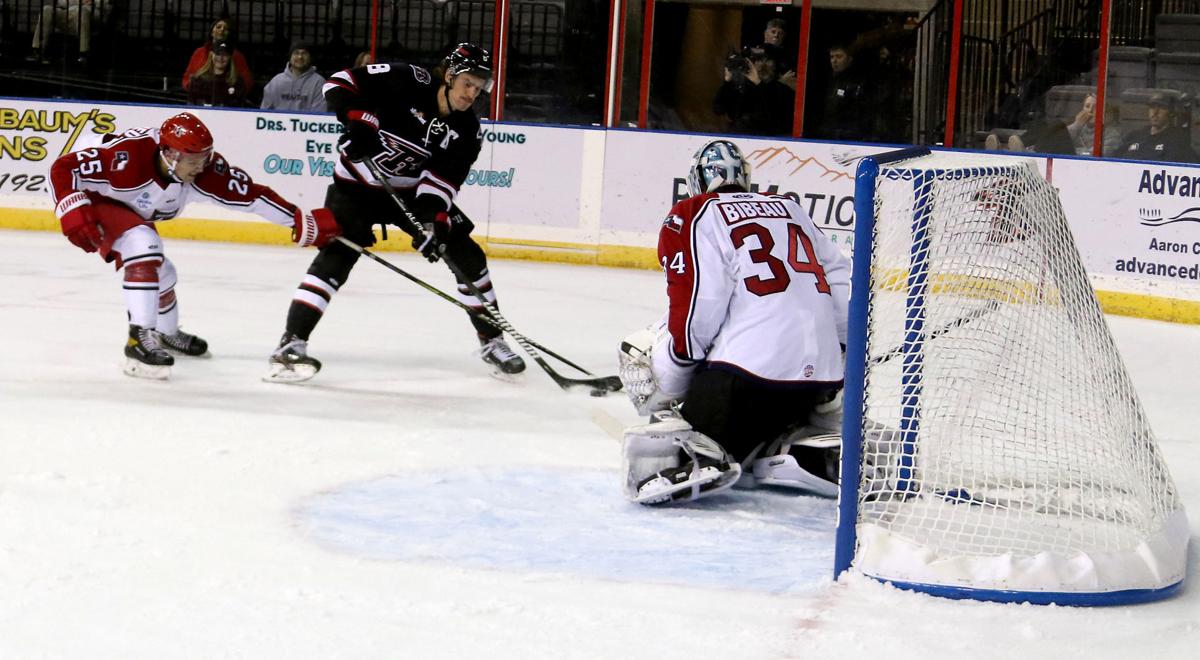 Rush defenseman Kenton Helgesen (8) gets in on some action on the offensive end during a power play in the second period Wednesday night. 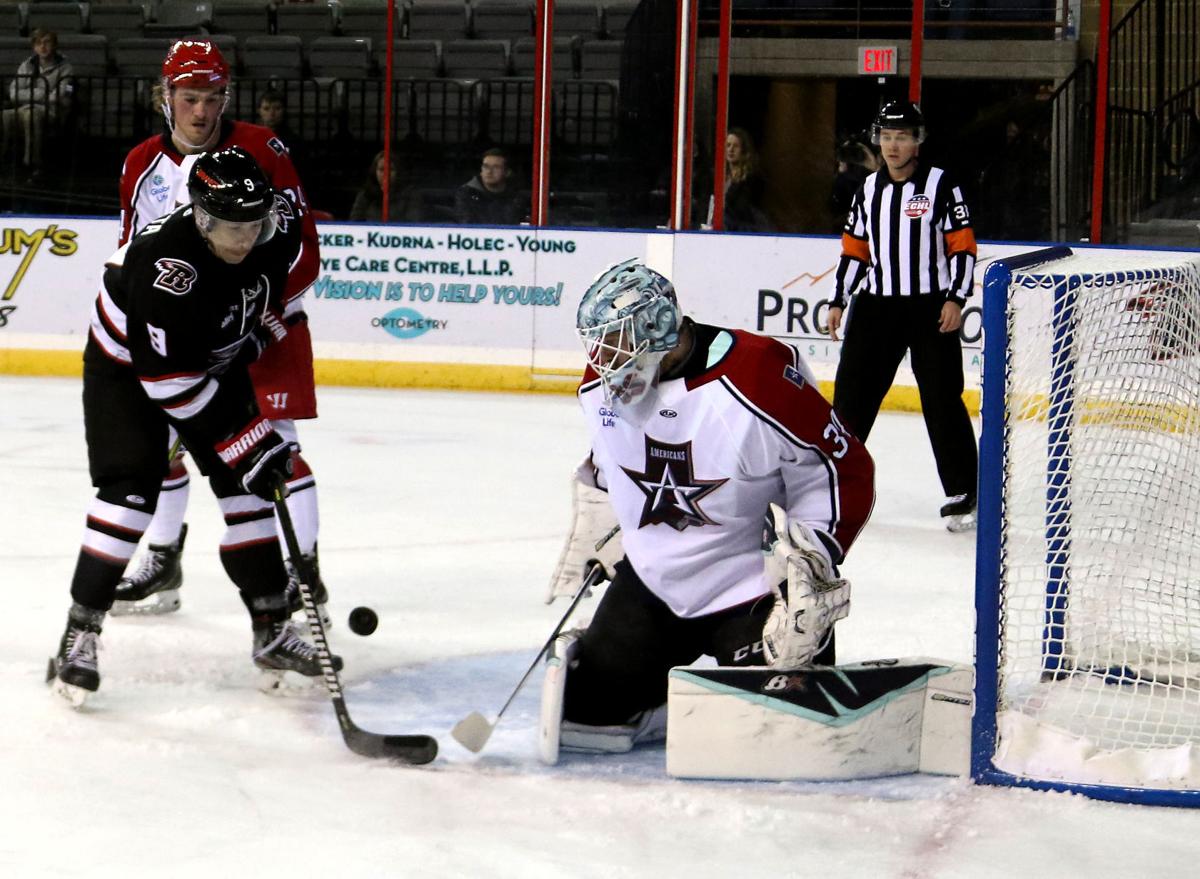 Rush forward Max Coatta tries to get the puck past the Allen goalie. Coatta scored in the first period Wednesday night for Rapid City.

For the offensive onslaught that was 60 minutes of hockey Wednesday night, overtime was the opposite.

The Rapid City Rush, rebounding from last Saturday’s performance where they tallied a season-low shots in a shutout loss, racked up a season-high shots and blistered the Allen Americans goalie with a flurry of attacks in the extra period, but failed to get one final goal.

“Give our guys credit because they battled and they put pucks to the net, but there comes a time and place where they need to bear down and score some goals,” Rapid City head coach Scott Burt said. “Yeah we put up some goals tonight but we didn’t put up enough.”

In the end, the Americans had the final answer, as veteran Chad Costello notched the lone goal of a shootout to clinch a 6-5 victory at The Monument Ice Arena.

The Rush (3-6-1) finished with 45 shots on offense, collecting 36 in regulation, and surrendered a season-low 22 shots on defense. Four of their five goals were go-ahead scores, and their fifth was an insurance marker, but the Americans (3-5-2) battled back every time to snap a four-game losing skid, skating only 13 players and with veteran player Jack Combs serving as head coach due to a team COVID-19 outbreak.

Max Coatta, less than a week removed from a hat trick performance, potted the game’s first goal less than three minutes in when unleashed a wrister off the blue line that found its way in to give Rapid City an early advantage, which lasted less than seven and a half minutes as Allen answered with its own shot from the blue line that D-Jay Jerome deflected in at 10:19 of the first period.

Jake Wahlin then stripped a defender of the puck from behind the net and, setting up with time from Gretzky’s office, fed a pass to Colton Leiter, who snapped one past goaltender Antoine Bibeau to give the lead back to the Rush at 16:32.

This turnover goal tho 😍 pic.twitter.com/NzupzJzdSC

This time the lead lasted less than two minutes as Jared Bethune unleashed a shot that trickled under Rapid City netminder Cole Kehler and in on a power-play chance to make it 2-2 heading into the first intermission. Kehler totaled 17 saves in his first start since Oct. 29.

Following an Alec Butcher hooking penalty, Stephen Baylis grabbed hold of a defensive faceoff and skated the other direction for a breakaway opportunity, and buried a shorthanded goal top-left to put the Rush out in front 3-2 at 16:17 of the second period.

a breakaway AND short-handed? We love to see it @skipbaylis pic.twitter.com/Hp1NwuZ8Yu

But the Americans responded 1:13 later when Nolan Kneen fired a slap shot through traffic and scored to level things at 3-3 after two frames.

Off a leftover power play that awarded Rapid City 1:46 of a man-advantage to begin the third period, Logan Nelson blasted a clapper from the point that Butcher redirected into the net 46 seconds into the frame to put the Rush ahead 4-3. Leiter then stuffed in his second goal of the night from close range three minutes in to make it a 5-3 affair.

But Allen came roaring back, potting a goal 29 seconds later before equalizing with one at 12:42. Spencer Asuchak tapped in the first one, and Jackson Leppard deflected in the second on a power play.

The Americans’ first shot of the third was their first goal of the period. They didn’t tally another one until their second goal.

“We scored, and we gave up a lot right after we scored,” Burt said. “We didn’t sustain any type of a lead tonight, and we didn’t get the two points tonight, which we needed.”

The Rush outshot their Mountain Division foe 9-3 in the seven-minute overtime period. In the shootout, the elected Baylis, Wahlin and Brett Gravelle all failed to convert their try's. Costello, a 35-year-old, tallied his by slipping one through Kehler’s legs on his team’s second attempt.

“We can score as many goals as we can,” Burt said. “But at the end of the day if you give up that extra one, you give up the extra two points.”

Rapid City and Allen will meet again Friday for the second of two meetings at The Monument Ice Arena this week. Puck drop is slated for 7:05 p.m.

Airbus A340 plane lands in Antarctica for the first time

Airbus A340 plane lands in Antarctica for the first time

Matthew McConaughey will not run for governor of Texas

Matthew McConaughey will not run for governor of Texas

Rush forward Logan Nelson (28) tries to get the puck around a prone Allen defenseman in the second period Wednesday night.

Rush defenseman Kenton Helgesen (8) gets in on some action on the offensive end during a power play in the second period Wednesday night.

Rush forward Max Coatta tries to get the puck past the Allen goalie. Coatta scored in the first period Wednesday night for Rapid City.