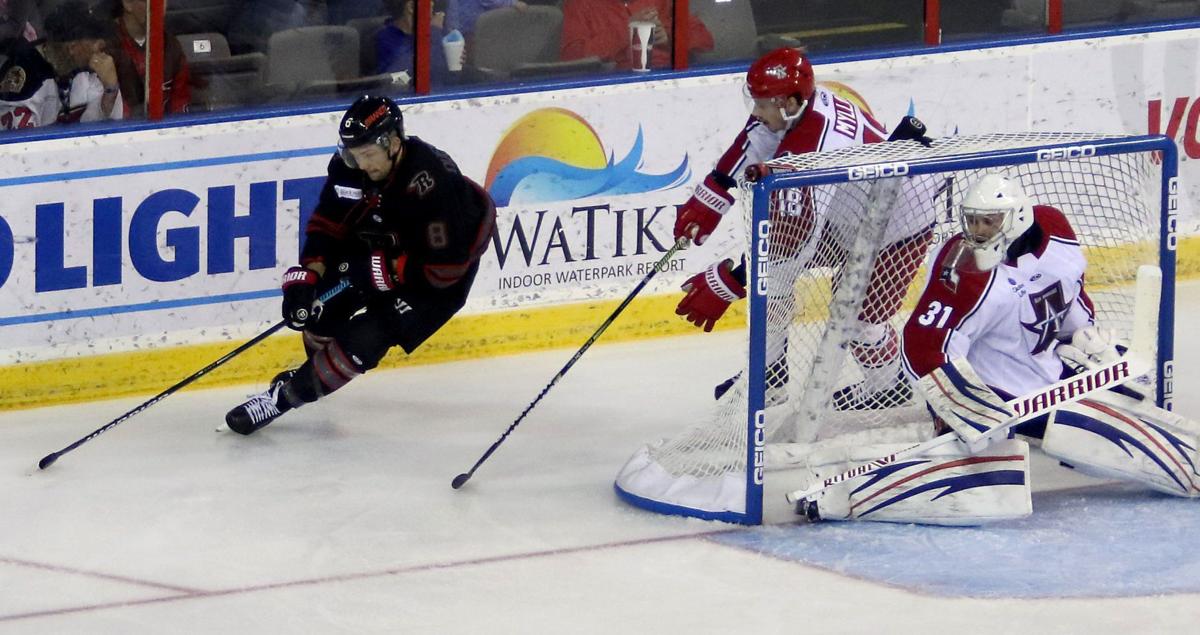 Rapid City forward Peter Quenneville wraps around the goal trying to score in the second period. Quenneville scored both goals for the Rush in a 3-2 loss Sunday. 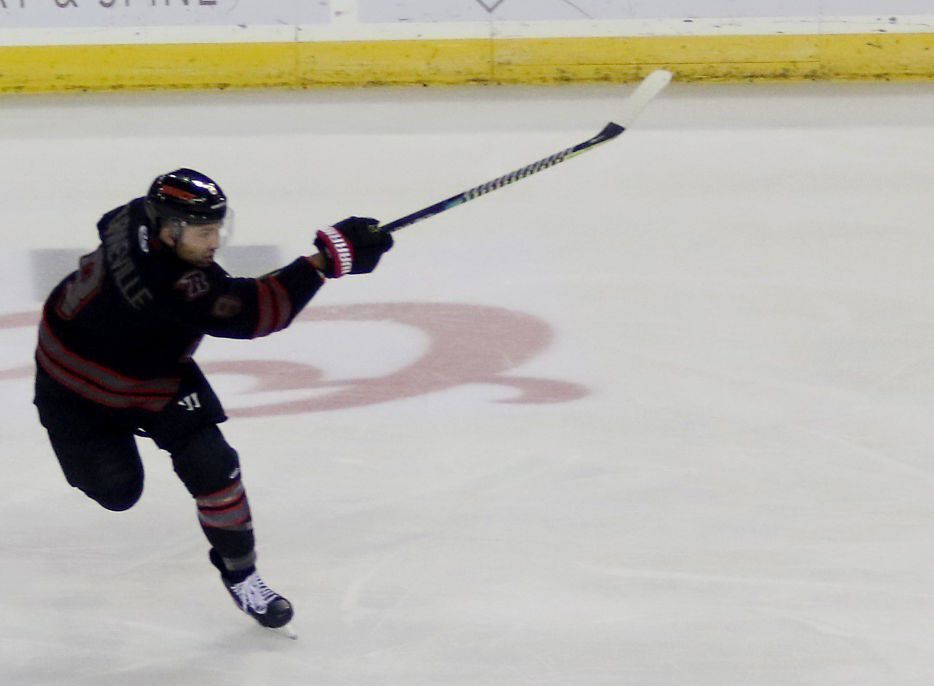 Rush forward Peter Quenneville fires an early shot on goal. Quenneville scored both Rapid City goals in the 3-2 loss to the Allen Americans. 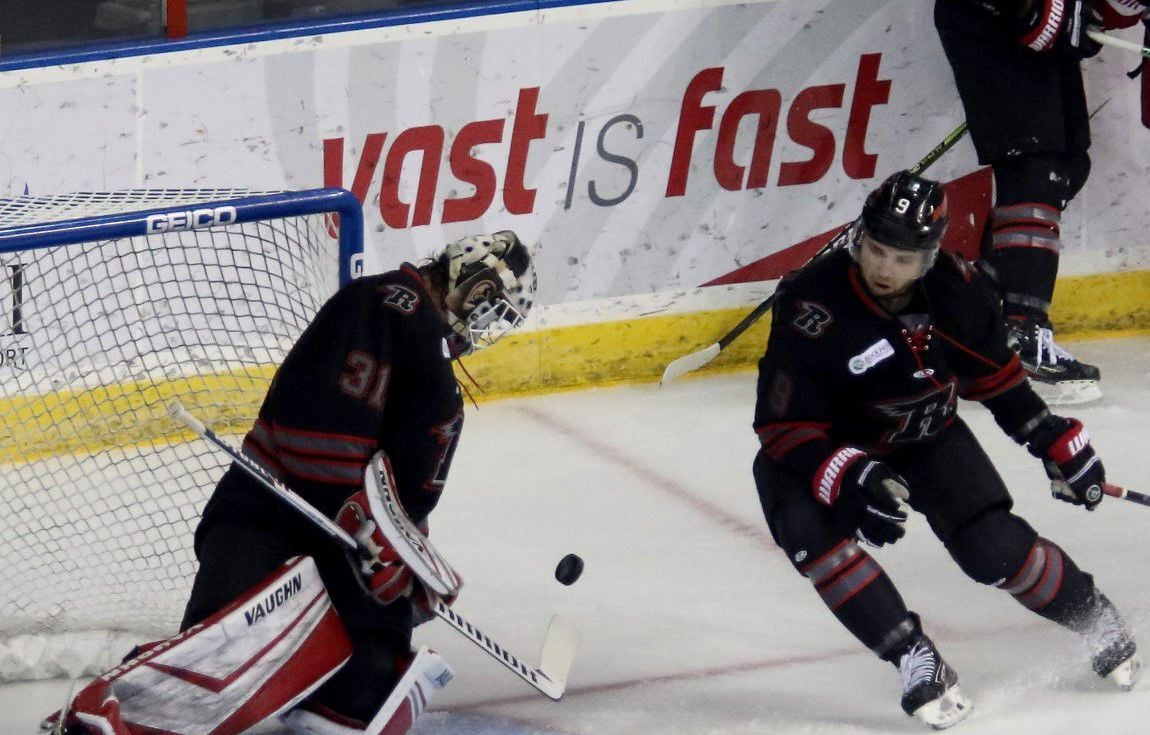 In their final home game of the season, the Rapid City Rush put on a comeback effort for the fans at Rushmore Plaza Civic Center.

With their goalie pulled, the Rush made a last-minute push to try and find a third goal in the final frame and even the score Sunday against the Allen Americans.

Their effort fell just short as several attempts on net were turned away, and Rapid City fell 3-2 for the series sweep to drop their fifth straight game.

“It was a great effort. We’ve had trouble scoring goals here the last couple weeks here, but the guys never quit,” Rush head coach Daniel Tetrault said. “We battled back. I thought we were going to tie it, but their goalie actually made some pretty big saves there at the end.”

Held scoreless for more than 45 minutes, Peter Quennevile potted two goals in a seven-minute span to make it a one-score contest. Tyler Coulter’s assist on the second goal gave him 60 points on the season, joining Quenneville and marking the first time a pair of Rapid City skaters have both reached that mark since the 2014-15 season.

“I’m just proud of the effort from the boys in the third. We would’ve loved to have tried to get the fans a win in the last game at home, but unfortunately it didn’t work out that way,” Quenneville said. “I thought we threw everything we could at the net and we gave it our best effort to try and fight back.”

The Americans (42-23-4) got on the board at 6:49 of the first period when Corey Mackin hauled in a backdoor pass from Sam Ruopp on a scramble and snapped a shot past the glove side of Carlson. They then doubled their lead later in the frame when Dyson Stevenson won a race to the puck on a Rush (32-33-4) power play and scored the shorthanded goal to make it 2-0 at 14:42.

Allen tacked on another at 14:10 of the second period when Scott Conway perfectly deflected in a head’s up shot from Zane Franklin to tally a power-play goal for a three-score advantage.

Rapid City, trying to avoid its second shutout in four games with an ice-cold offense, finally got on the board at 5:18 of the third when Quenneville rifled in a textbook one-timer from Ian Edmonson to the bottom right corner of Allen netminder C.J. Motte’s net from the left faceoff circle.

The Edmonton, Alberta native then redirected a netfront pass by Coulter from behind the net and scored from close range to cut the Rush’s deficit to one with 7:54 remaining in regulation.

“Maybe from an outside perspective, it’d be easy to shut it down, but I think we care too much about each other, and at the end of the day we want to have respect for the fans and the people who pay money to come watch us play,” Quenneville said. “I think if we didn’t give an effort in the third period, it’s just not very professional, so I’m proud of the fact we didn’t give up, but I would’ve loved to have gotten a win.”

Tetrault pulled Carlson with 1:58 to play for the 6-on-5 and Rapid City put three more shots on target, two coming from Quenneville, including a blistering one-timer, but all three were stopped by Motte, who finished with 30 saves.

“We had a lot of chances and there’s no quit. We wanted to go out with a bang here in the last home game in front of our fans,” Tetrault said. “We knew we had to give all our best there in the third period, and we did.”

Rapid City will play the final two games of its campaign in Allen on Friday and Saturday before a shortened offseason gets underway due to the ECHL’s planned return to normal scheduling for the 2021-22 season.

“We’ll go to Allen, try to get some wins there, and play hard and play with pride,” Tetrault said. “That’s what we did tonight, especially in the third period.”

Rapid City forward Peter Quenneville wraps around the goal trying to score in the second period. Quenneville scored both goals for the Rush in a 3-2 loss Sunday.

Rush forward Peter Quenneville fires an early shot on goal. Quenneville scored both Rapid City goals in the 3-2 loss to the Allen Americans.