By the time the third period rolled around Saturday night, the Allen Americans had had enough.

For the previous eight frames, their intensity and pressure had been matched at almost every point by the Rapid City Rush, who had taken the first two games of the series and pushed their rivals back on their heels

The Rush finally bent, and the Americans took advantage.

Aided by two special teams goals and three total in the final frame, Allen pulled away for a 4-1 victory at Rushmore Plaza Civic Center to avoid a sweep and snap Rapid City’s four-game winning streak.

Had the Rush picked up the victory and the Utah Grizzlies fell to the Kansas City Mavericks — they won 4-1 — they would’ve slid into a playoff spot, but remain on the outside looking in with 22 games remaining.

“It just seemed like we thought it was going to be easy tonight,” Tetrault said. “We weren’t ready to play, and you’ve got to give credit to Allen; they came out hard. I warned the guys they were going to come out hard.”

Brad Barone was battered in his second straight start between the pipes, replacing a banged up Adam Carlson, and made 42 saves to drop to 8-3-2 on the season and suffer his first career loss at the Civic Center.

“Brad Barone played great. He’s probably one of the only guys who played well in the lineup tonight,” Tetrault said. “We were just a half a step too late to everything. Allen wanted it more, and maybe we got too confident.”

The Americans (29-15-3) put the hammer down in the first period and walloped Barone with 20 shots on net. Just one of those found the back of the net, however, as Corey Mackin hauled in a pass from the left circle as the Rush (24-22-4) scrambled to clear the attack and fired in a forehand shot from the right at 8:52.

Garlent answered less than three and a half minutes later when he gloved down a deflected shot outside the crease and then wrapped the puck around Allen goalie Jake Paterson to level the contest at 12:09.

The Americans finished the opening frame with a 20-9 shot advantage.

For just the fourth time this season, the Rush played a scoreless second period with their opponents as the score remained deadlocked at 1-1. A high-sticking call on Allen gave Rapid City its first power play of the night, but the Rush were unable to take advantage, as they did with two others to drop to 1-for-39 on man-advantage against the Americans in 11 matchups.

Garlent lit the lamp on a pass from Tyler Coulter off a 1-on-1 at 11:49 but the goal was immediately called off and remained a no-goal upon review.

Physical aggression was also on tap between these bitter rivals, but no fights broke out. The only action taken was a coincidental roughing call at 10:47 of the middle frame on a scuffle between Tyson Empey and Scott Conway that sent them both to the box for a 4-on-4.

Allen’s first of three third-period goals was scored at 2:00 when Conway, who sat out Friday’s game, easily put away a kick-saved rebound. Les Lancaster potted another one just as a 4-on-4 expired to record a shorthanded goal at 8:51.

“We were out of rhythm, especially in the third period. Out of sync,” Tetrault said. “They scored a quick goal there to make 2-1 and they just carried the momentum and outworked us and outplayed us. Plain and simple.”

Chad Butcher notched the last goal of the evening when he snapped in a shot with Barone down on the ice after making a save on a power play at 17:44. Barone pleaded with officials that goaltender interference prevented him from attempting a save on the shot, but the call stood after a review.

The Rush, now 5-7-1 when tied after two periods, will begin a three-game series in Tulsa, Oklahoma against the Oilers on Wednesday, with the second and third games set to be played Friday and Saturday.

“We’ve got to regroup and start another winning streak, and it’s a good time to get on the road here,” Tetrault said. “You’ve got to burn that film and move on.” 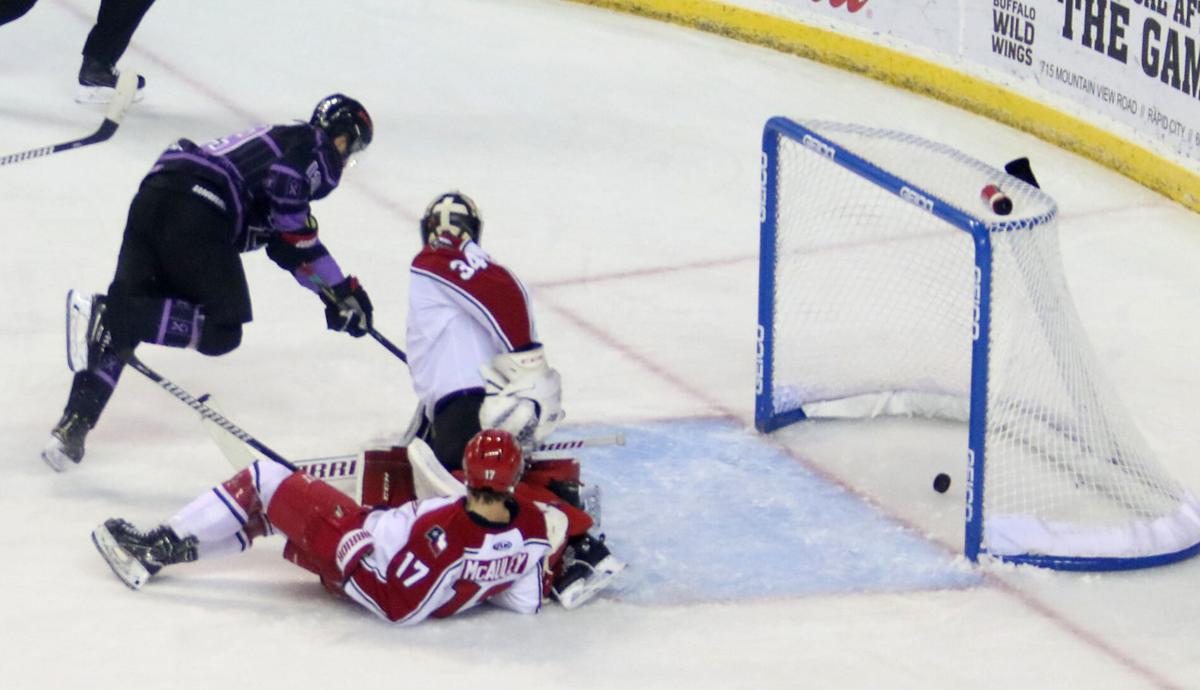 Rush forward Mike Hedden gloved the puck and wrapped it around the Allen goalie to tie the game at 1-1. Allen went on to win 4-1. 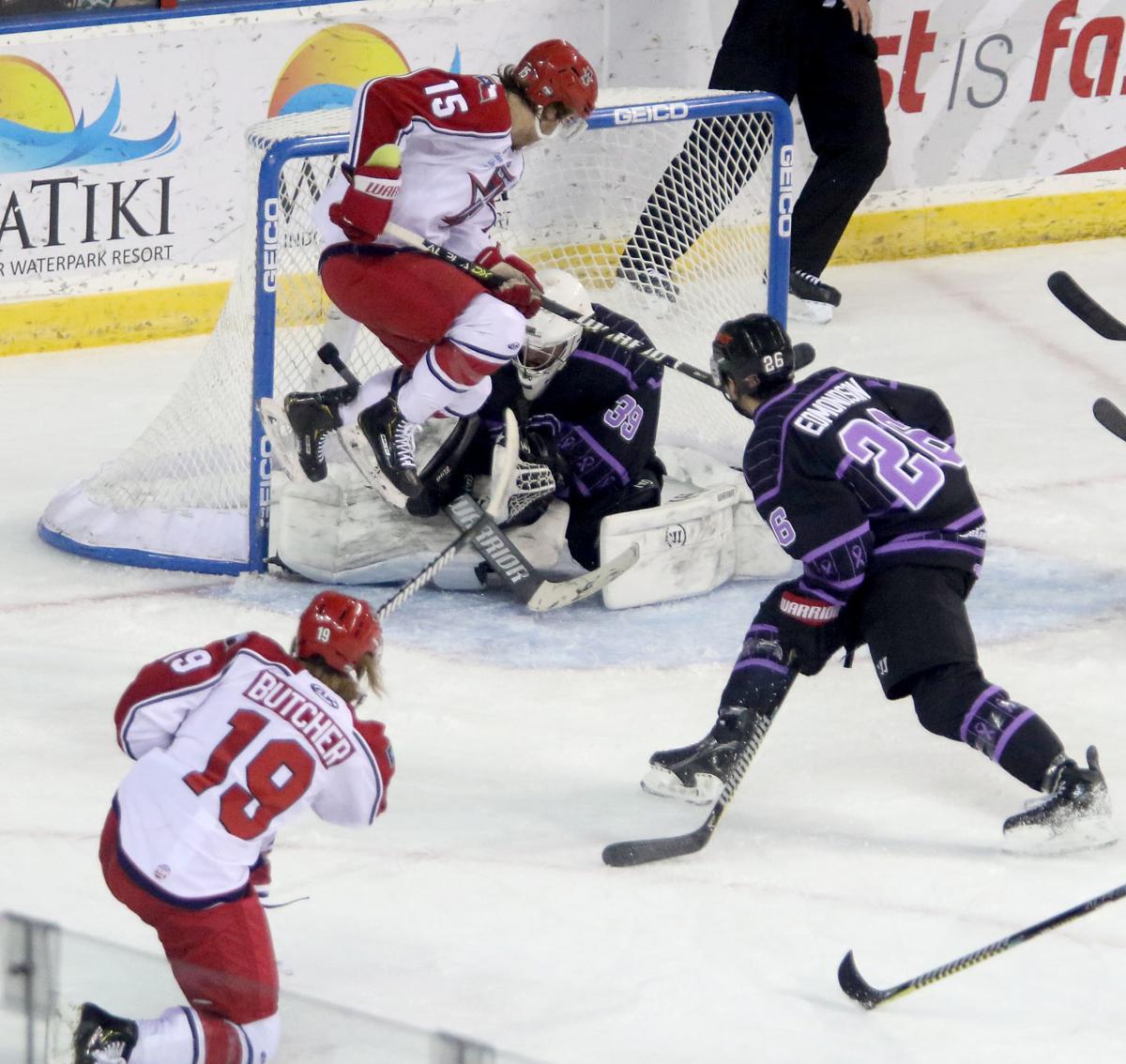 Rapid City goalie Brad Barone makes a save around a leaping Allen forward Saturday night in the Rush's 4-1 loss to Allen. 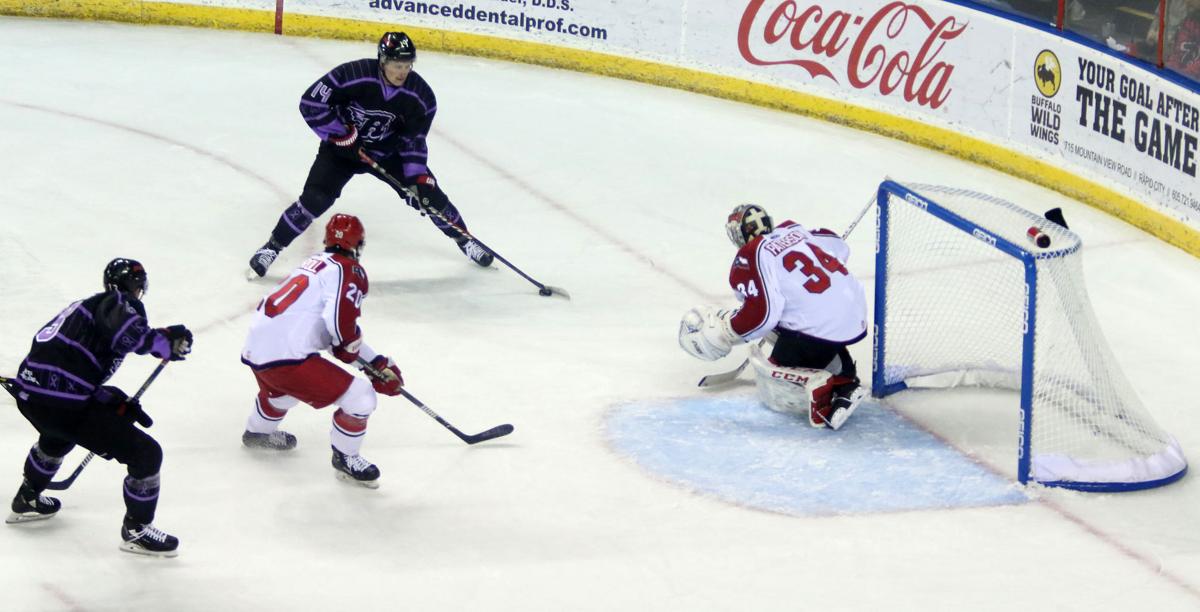 Rapid City forward Tyler Coulter looks for a pass to Peter Quenneville. The Rush dropped a 4-1 decision to Allen to end their 4-game win streak. 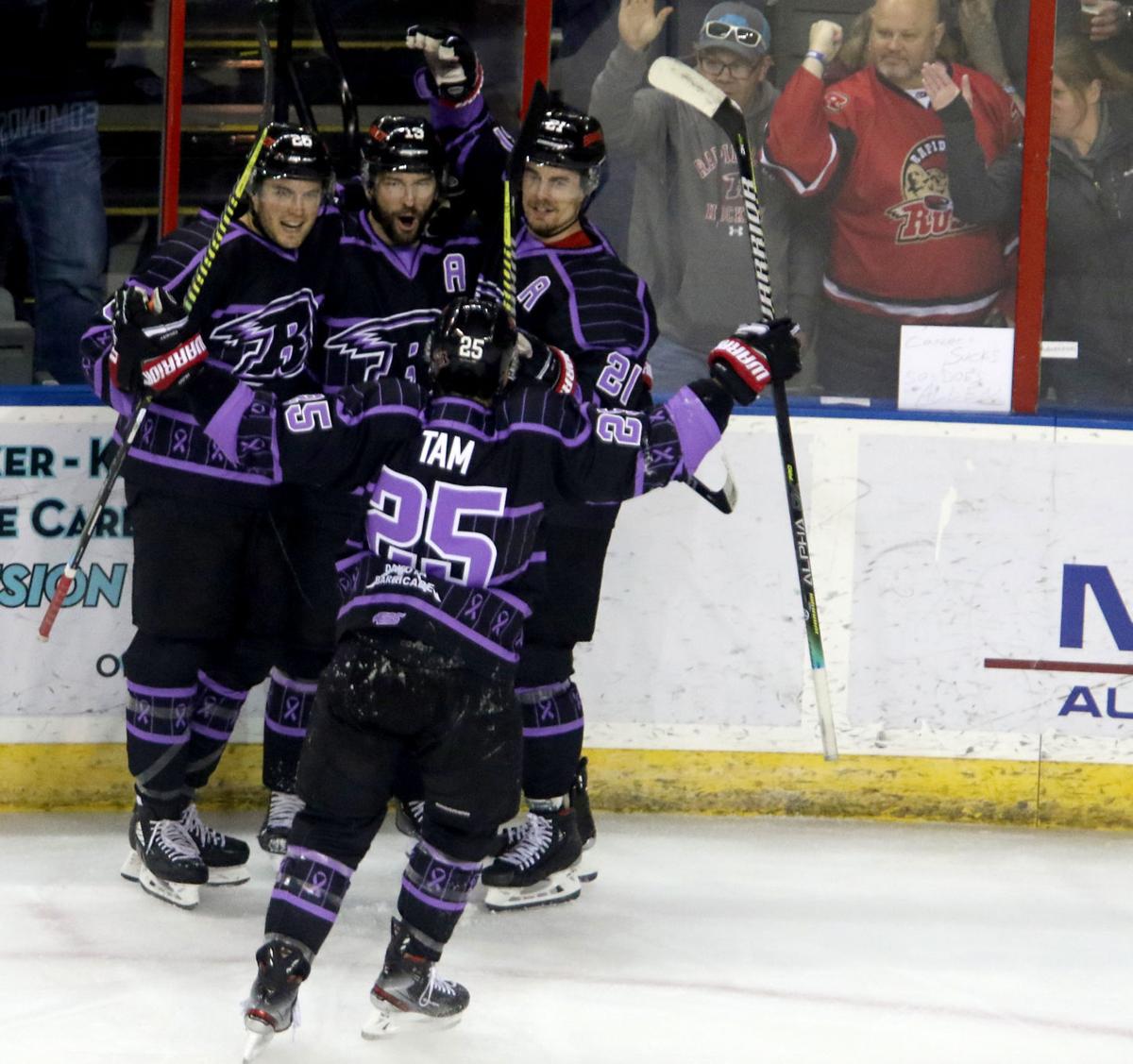 Mike Hedden and his Rush teammates and fans celebrate his goal to tie the game with Allen.