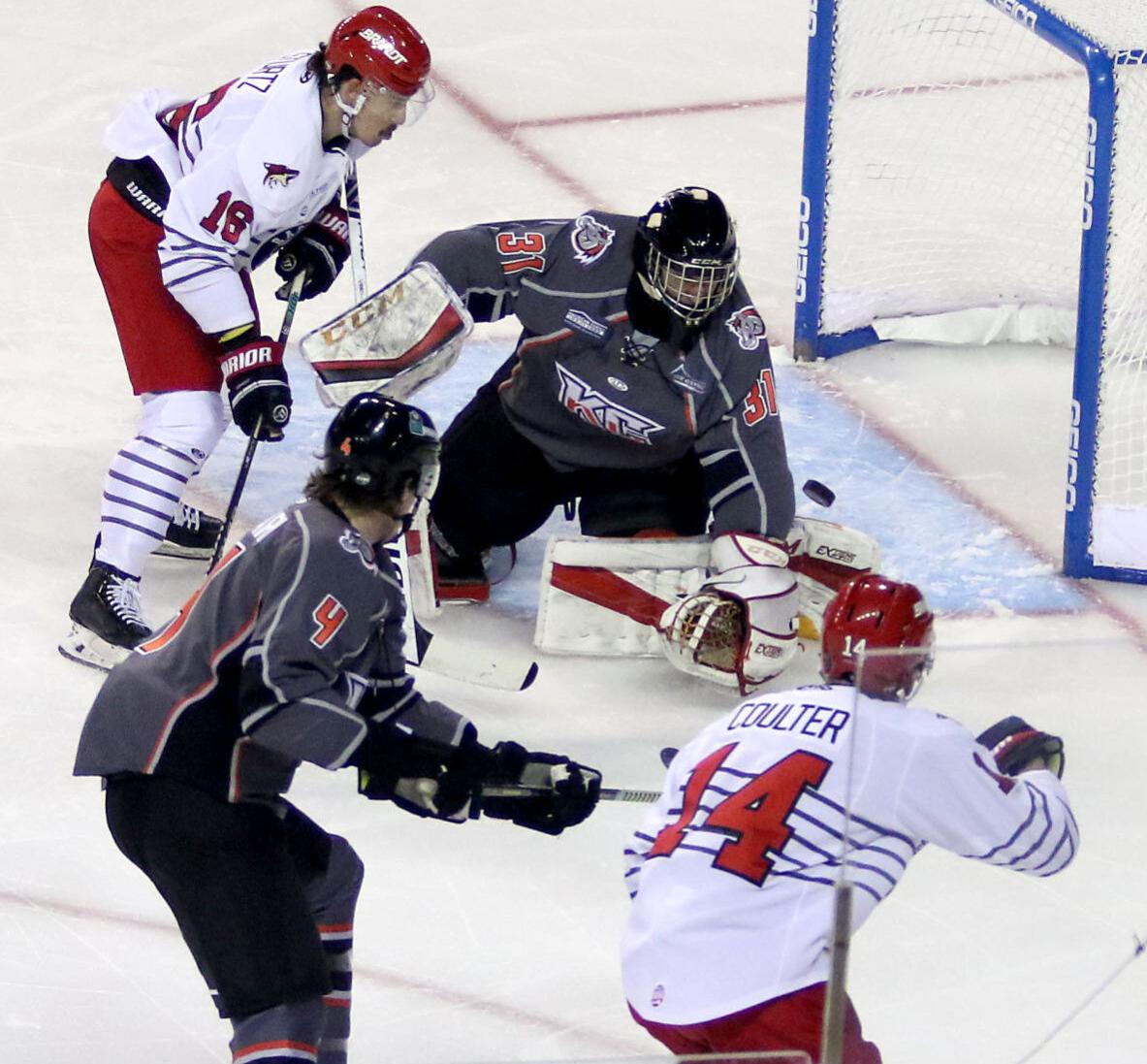 Tyler Coulter (14) fires a shot on goal in the first period Sunday. Coulter scored a late third period goal to send the game to overtime for the second straight day. The Rush won in a shootout to complete the series sweep of the Mavericks. 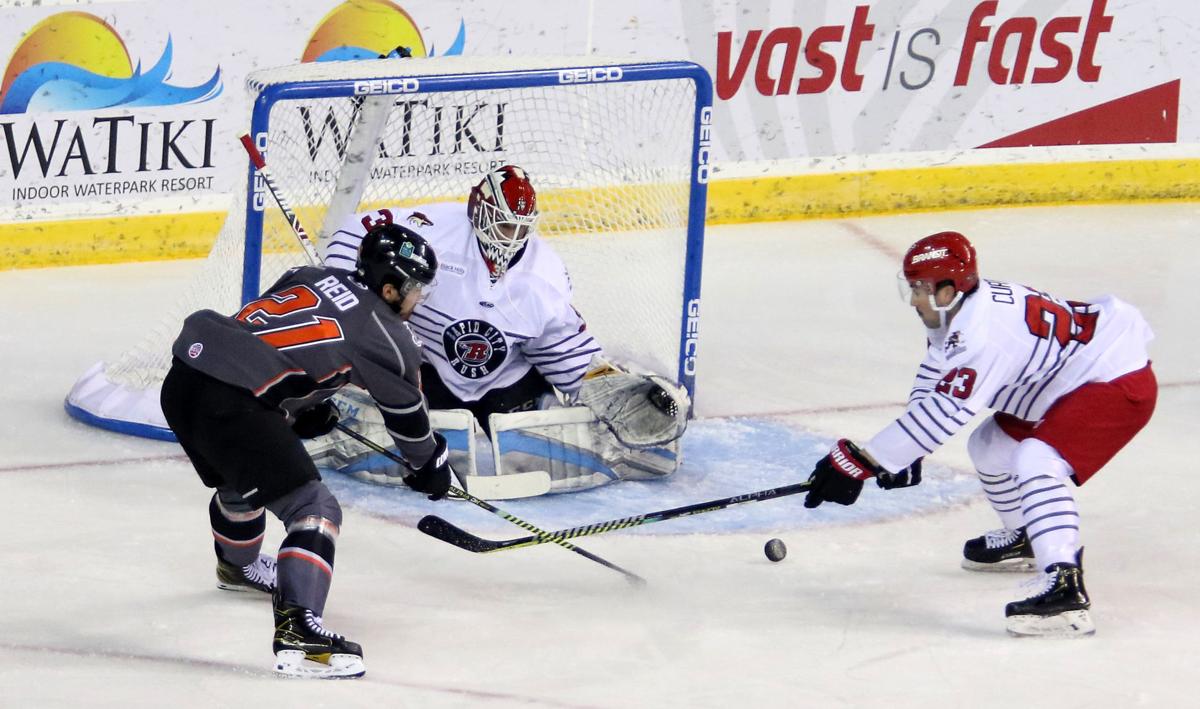 Rush goalie Gordy DeFiel gloves one of his 30 saves in a win over the Mavericks. DeFiel got the start and the shootout win over Kansas City Sunday.

The Rapid City Rush don’t have much experience in the shootout this season, but it didn’t seem to matter Sunday evening.

With goals from Tyler Coulter, Peter Quenneville and Hunter Garlent, the Rush took advantage of all three chances and topped the Kansas City Mavericks 3-1 in the shootout to defeat their Western Conference foe 4-3 for the three-game series sweep and their fifth straight victory.

“They were highlight goals, too. They put on some good moves in the shootout,” Rush head coach Daniel Tetrault said. “It’s rare you see three goals in a shootout. I’ll take it, and everybody’s pretty happy.”

Since an 8-5 wakeup call loss to the Greenville Swamp Rabbits last week, Rapid City (17-18-2) has allowed a combined eight goals during this streak and has claimed three wins via overtime or shootout. Its only other shootout this season came in a 3-2 victory over the Utah Grizzlies on Feb. 19.

All three goals from Kansas City (13-13-6) were go-ahead scores that the Rush answered. The final response to send the contest into overtime was pegged by Coulter, who held the puck in front of the net for what felt like eternity before finishing off a backhander at 18:17.

“It was just such a great play by Cedric (Montminy), getting up the ice, and (Quenneville) being such a shooting threat opens so much time in the middle of the ice,” Coulter said. “From there, I think it was just seeing where the goalie was, and the rest is history.”

Coulter then got the first call on the shootout, repeating a similar holding action but potting a forehander. Adam Brady, who put the Mavericks on the board with a 4-on-4 goal at 10:41 of the first period, beat Defiel on his attempt to even the shootout.

Quenneville and Garlent both notched backhanders on their goals, while Defiel made a stop in between to close out a 30-save win and improve to 4-4-1 on the season.

“Gordy played great, considering he hadn’t played for a while. He made the saves that we needed at the right times and came up big in the shootout,” Tetrault said. “I’m really happy for Gordy. He needed that, confidence-wise. It’s good to have two goalies who can play well and win you games, so it was a good game for Gordy.”

Garlent’s game-winner served as his second consecutive and third over the last four games, as he stuffed in overtime goals in Saturday’s and last Sunday’s victories.

Brady’s power-play goal in the opening frame ended a streak of 14 straight penalty kills by Rapid City, but the game was soon leveled when rookie Gabriel Chabot rifled in a one-timer from Montminy from the left side with just sevens seconds left in the first period.

🍏 Montminy, Curti
We enjoy upsetting KC to tie the game right before the end of the period, right @bigchaby? pic.twitter.com/QQJFci5qMt

After Jarred VanWormer gave Kansas City a 2-1 advantage at 10:38 of the middle frame, Charlie Curti fed a backdoor pass to Quenneville, who found the back of the net from the left less than two and a half minutes later to make it 2-2.

Coulter’s game-tying score late in the third came just over two minutes after Rob Bordson tapped in a rebound to put the Mavericks ahead.

Prior to the winning streak, the most consecutive victories the Rush managed to put together were just two. They are now one win away from .500 as the back half of the season gets underway.

“Getting a sweep at home is so huge right now, climbing the standings and trying to get back into it after maybe not the start we were looking for,” Coulter said. “But we’re definitely rolling in the right direction now.”

Rapid City returns home Friday and Saturday for a two-game set with the Utah Grizzlies. The Rush are 3-6-1 against the Grizzlies.

Tyler Coulter (14) fires a shot on goal in the first period Sunday. Coulter scored a late third period goal to send the game to overtime for the second straight day. The Rush won in a shootout to complete the series sweep of the Mavericks.

Rush goalie Gordy DeFiel gloves one of his 30 saves in a win over the Mavericks. DeFiel got the start and the shootout win over Kansas City Sunday. 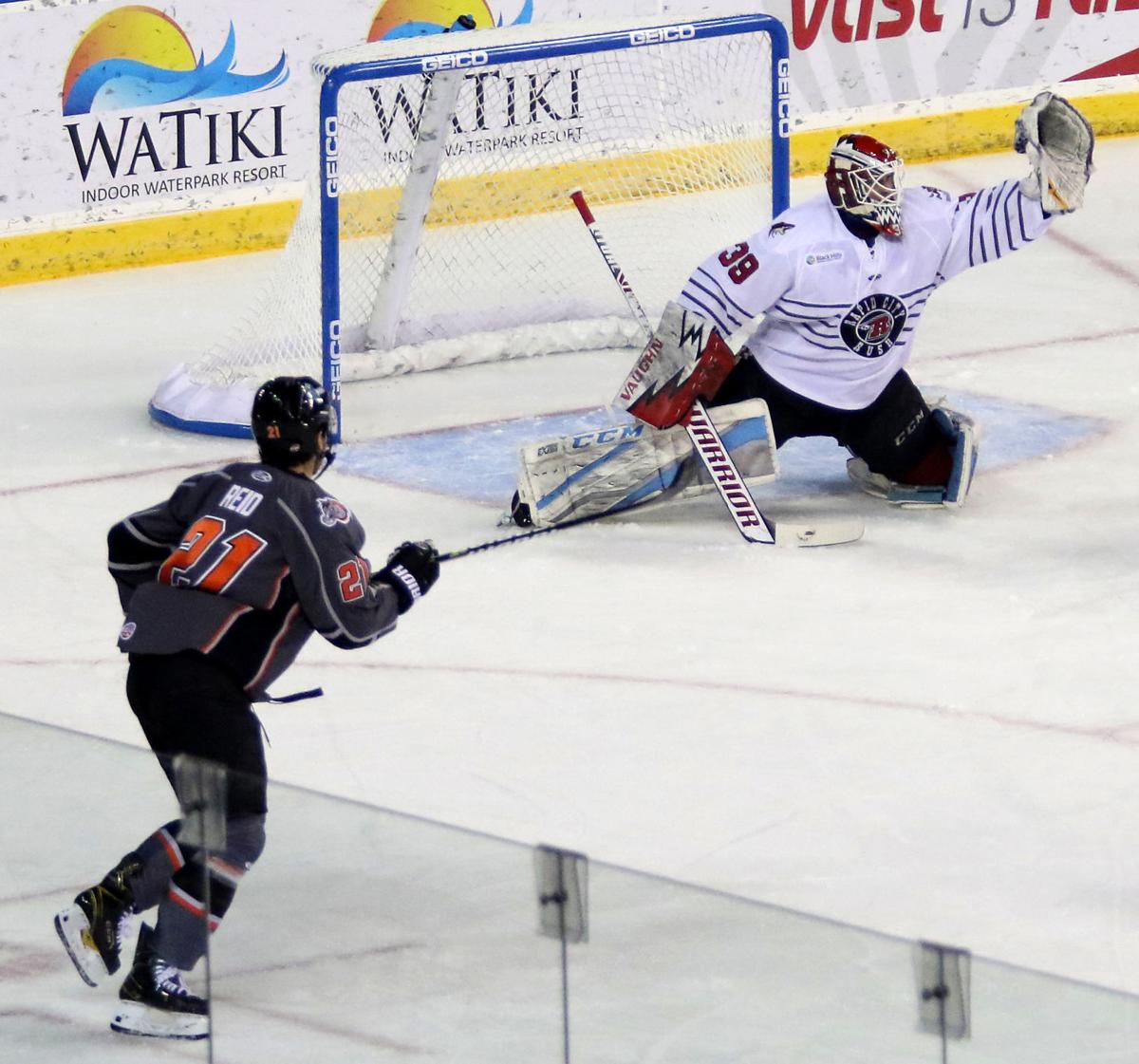 Rush goalie Gordy Defiel gloves one of his 30 saves in a win over the Kansas City Mavericks on March 14 at Rushmore Plaza Civic Center. Defiel got the start and the shootout win.