Five pushups for every missed shot.

The Rush had opportunities to get on the board Saturday night, but shots sailed wide, over and pretty much everywhere but on the net. They finished with just 14 on target, by far a season-low, in a 3-0 loss to the Idaho Steelheads at The Monument Ice Arena that served as their inaugural blanking of the season.

Dave Tendeck was back between the pipes after Lukas Parik made the start Friday. He recorded 35 saves among a 66% capacity crowd to move to 1-4-0 in his second year as a professional.

The Steelheads (6-5-0) scored early again, potting their first goal at 1:31 of the first period when Colton Kehler fired a cross-ice one-timer over the left shoulder of Tendeck.

Tensions that resulted in a dual-fight in Friday’s affair continued in the opening frame of Saturday’s contest as a hard but legal hit on Kehler into the boards at 11:09 resulted in the 5-foot-9, 183-yard pound forward dropping the mitts with Kenton Helgesen, who outsized Kehler at 6-foot-3, 200-pounds. Both were sent to the box following the fight and not other fisticuffs broke out.

The Rush (3-5-1) picked up their only power play of the evening on a cross-checking minor that started in the final 19.5 seconds of the first period and spilled over into the second period. Nothing came of it, however.

Later in the middle frame, Chase Zieky stuffed in a rebound past Tendeck’s left-handed glove side to give Idaho a 2-0 advantage at 17:41.

With less than 10 minutes to play in regulation, the Rush put the pressure on with a shift that resulted in three furious shots. The best chance came from Logan Nelson, who unleashed a one-timer from the high slot that clanked off the post at 12:55.

Tendeck was pulled with 2:41 remaining in regulation. The extra attacker yielded zero shots, and in turn Clint Filbrandt glided an empty-netter from the Steelheads’ defensive zone at 18:03.

Idaho finished with a 38-14 shot advantage.

“I don’t know if we didn’t have it today, but it seems like it’s starting to get consistent of us missing the net,” Burt said. “Not giving ourselves an opportunity to battle in front of the net with our shots.”

Rapid City returns to The Monument Ice Arena on Wednesday to begin a three-games series with the Allen Americans. 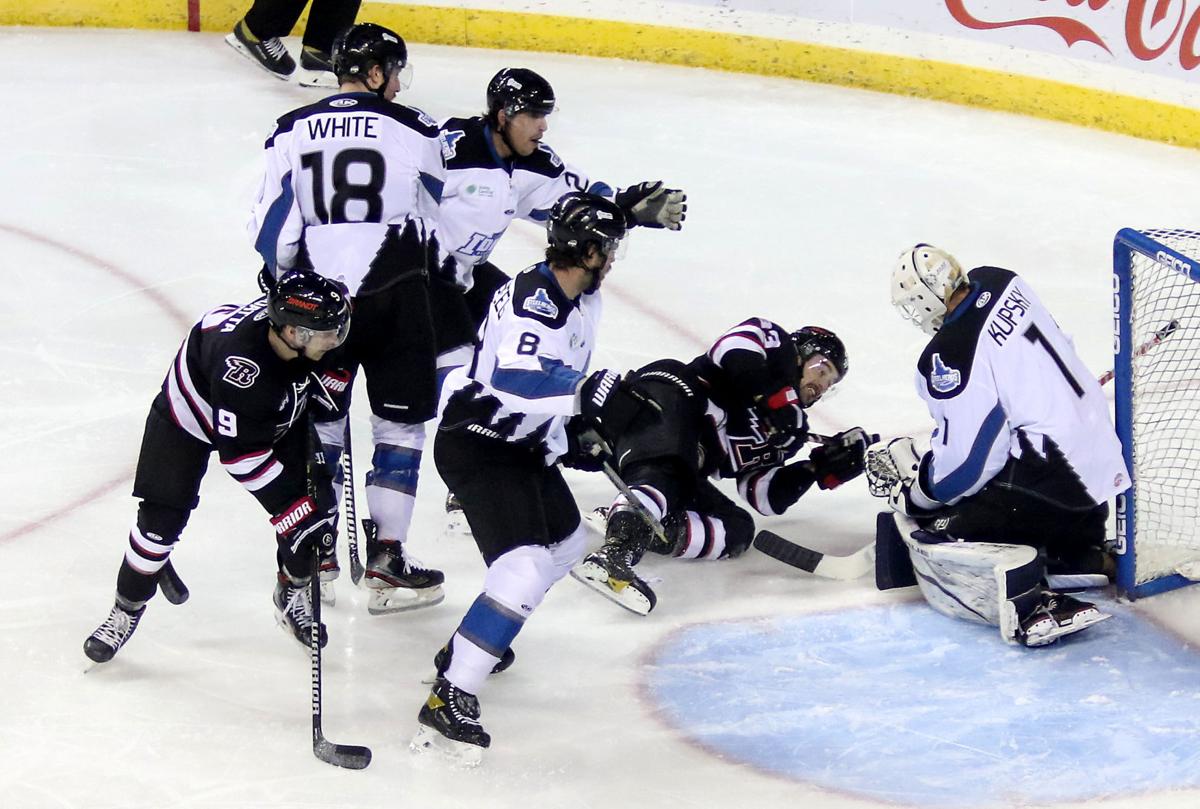 Rapid City forward Brett Gravelle (23) hits the ice but still gets a shot on goal in the first period of the Rush's 3-0 loss to Idaho. 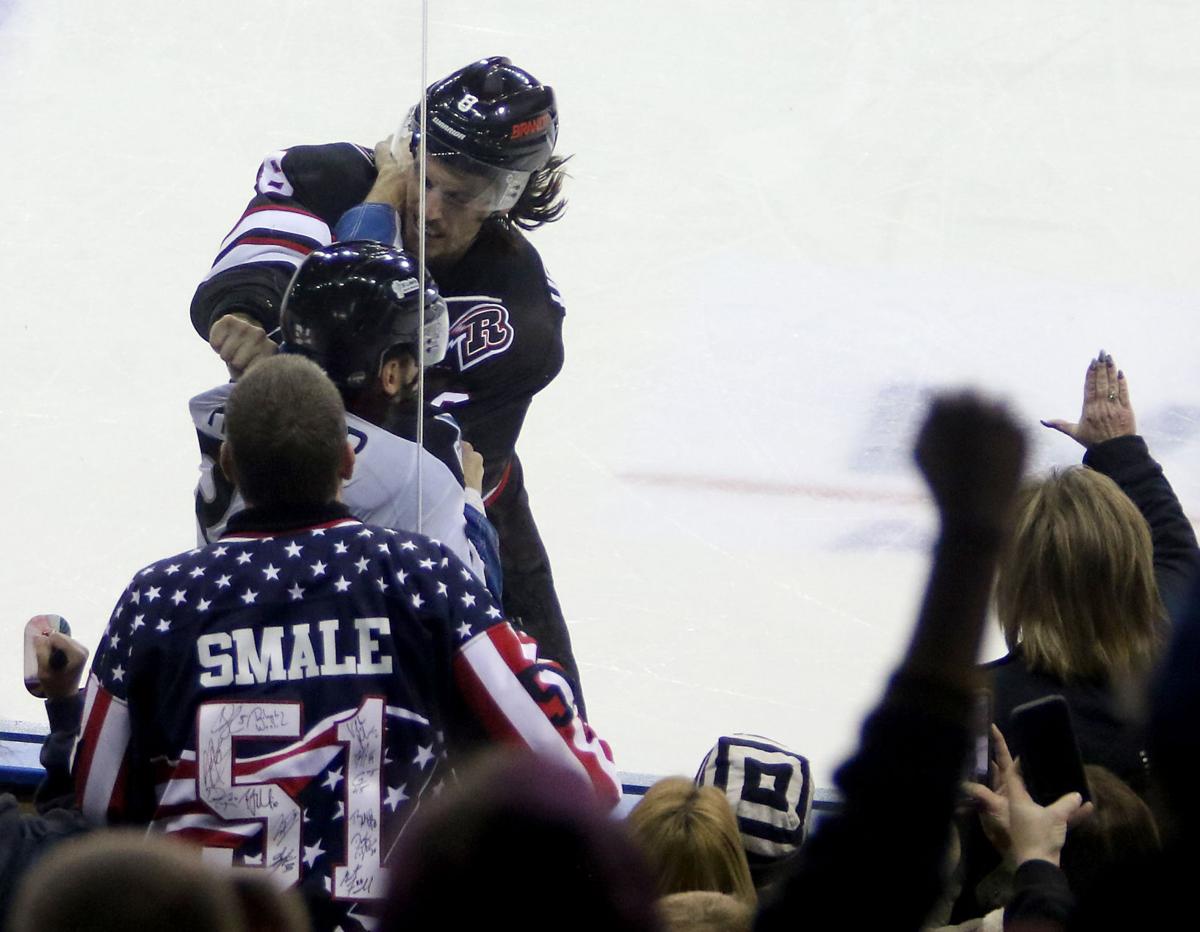 Rapid City's Kenton Helgesen and Idaho's Colton Kehler square off in the first period of the Steelhead's 3-0 win Saturday. 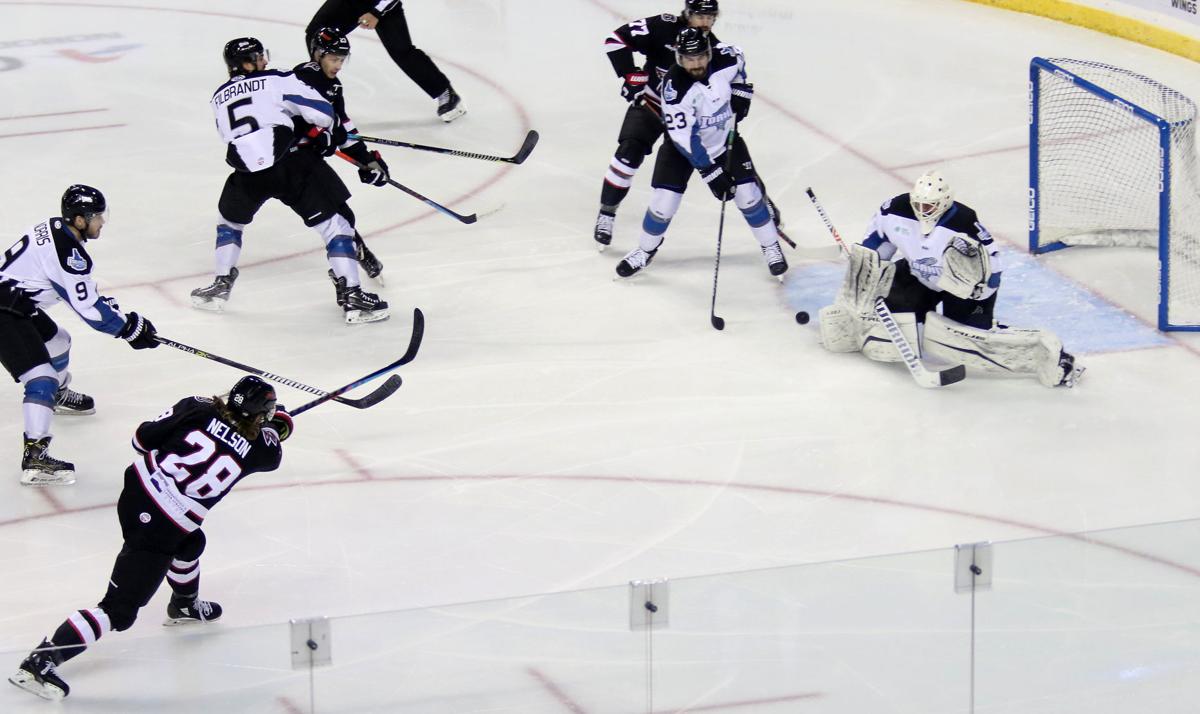