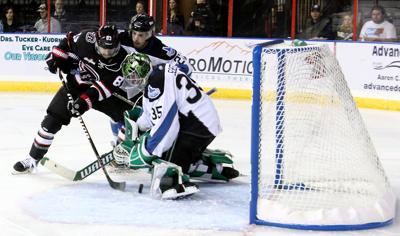 Signed just two days ago, Tanner Schachle made a hurried road trip from Long Island, New York to the Black Hills so Wednesday could serve as his ECHL debut.

He reached the City of Presidents in time, and reached a rebounded puck in the second period before stuffing in his first-career goal to get the Rapid City Rush on the board.

“It’s nice to get the monkey off the back right away,” Schachle said. “But we didn’t win and that’s what really matters, so it’s bittersweet there.”

Schachle’s goal was just one of a season-high 34 shots on net to get through for the Rush, who in turn gave up goals in each frame in a 4-1 loss to the Idaho Steelheads at The Monument Ice Arena.

The Rush, now on a four-game skid (0-2-1), plastered Steelheads (5-4-0) goalie Adam Scheel with 17 shots on frame in the first period, also a season-high, but tallied 17 in the final two frames and were outshot 38-34. They went 0-for-4 on power plays, failing to convert on a near minute-long 5-on-3 in the middle frame.

“At the end of the day I look at the power plays and penalty kill,” Burt said. “Special teams lost us tonight as they scored a power-play goal and we didn’t get one.”

Shawn McBride silenced an already hushed 40% capacity crowd by burying a one-timer past the glove side of Rapid City goaltender Dave Tendeck on Idaho’s inaugural shot 2:46 into the contest. Tendeck went on to stop 34 of the next 37 shots.

Two penalties in the opening frame aided in the Rush’s 17-7 shot advantage, which stood at 11-3 more than midway through, but none of the attempts seriously threatened the net of Scheel, who finished with 33 saves.

“We funneled a lot of pucks, that’s for sure,” Burt said of the first period. “It gave us an opportunity to battle in front of the net, and then we kind of went away from that. I thought the two power plays we had in the first period let us down.”

The Steelheads struck early again in the second period when Will Merchant fired a wrister from the right circle that caught a large piece of Tendeck but trickled under the young netminder and over the goal line at 1:17.

Following a squandered 5-on-3 chance and a 5-on-4 opportunity that was quelled when Max Coatta was nabbed for hooking to produce a 4-on-4, Idaho made it 3-0 when former Rush defenseman Darren Brady unleashed a wrister from the slot at 10:56 on a power play after Logan Nelson was called for interference.

Schachle put away the first goal of his ECHL and Rush career at 11:55 of the middle frame after Coatta’s shot was turned away and the 24-year-old stuffed in the rebound glove side of Scheel.

“He just wanted to come here and play,” Burt said of Schachle. “There’s obviously going to be some learning curves with him, but to see a young guy get the opportunity to bury a goal in his first game, it’s exciting for him, it’s exciting for us, we just didn’t back that up.”

The Steelheads tacked on one more in the third period when David Norris rifled in a rebound from the slot on a shot that ricocheted off Tendeck’s facemask at 12:49.

“We didn’t work hard enough. I thought they outworked us in all facets of the game,” Burt said. “We’ll come back tomorrow and work our tail off.”

The two teams will meet again Friday for the second of three meetings in the series. Puck drop is slated for 7:05 p.m. at The Monument Ice Arena. 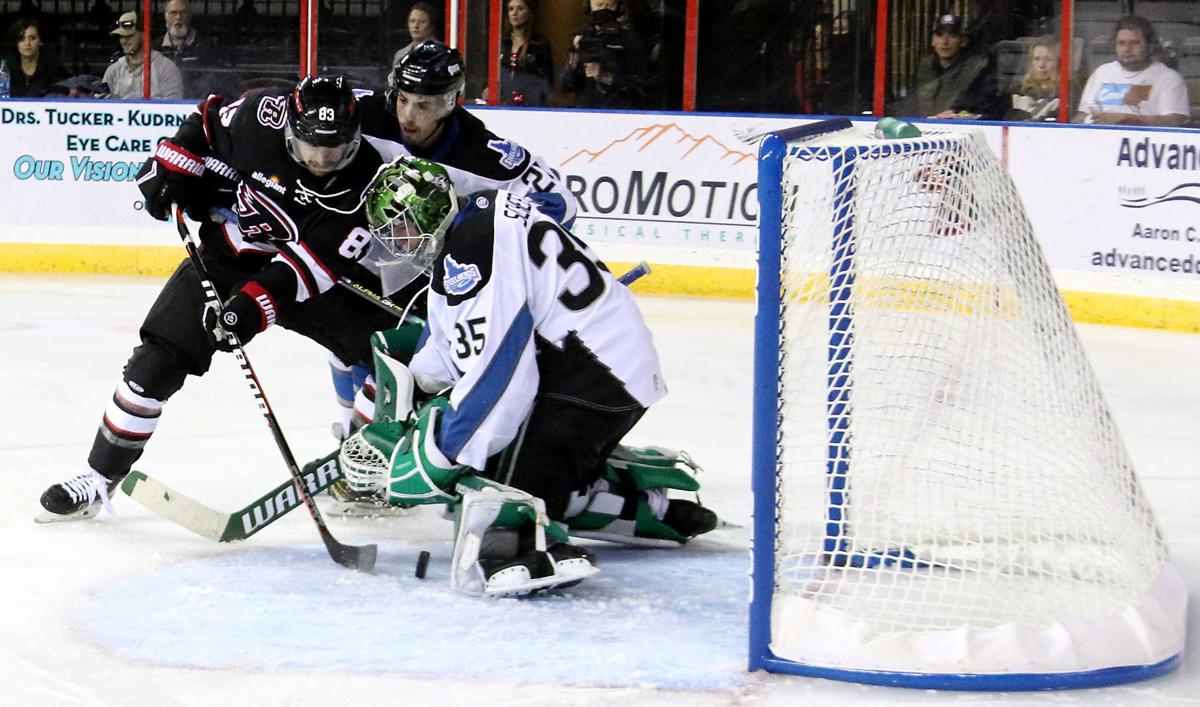 Rush forward Jake Wahlin (83) tries to push the puck around the Idaho goalie Wednesday night in Rapid City's 4-1 loss to the Steelheads at The Monument Ice Arena. 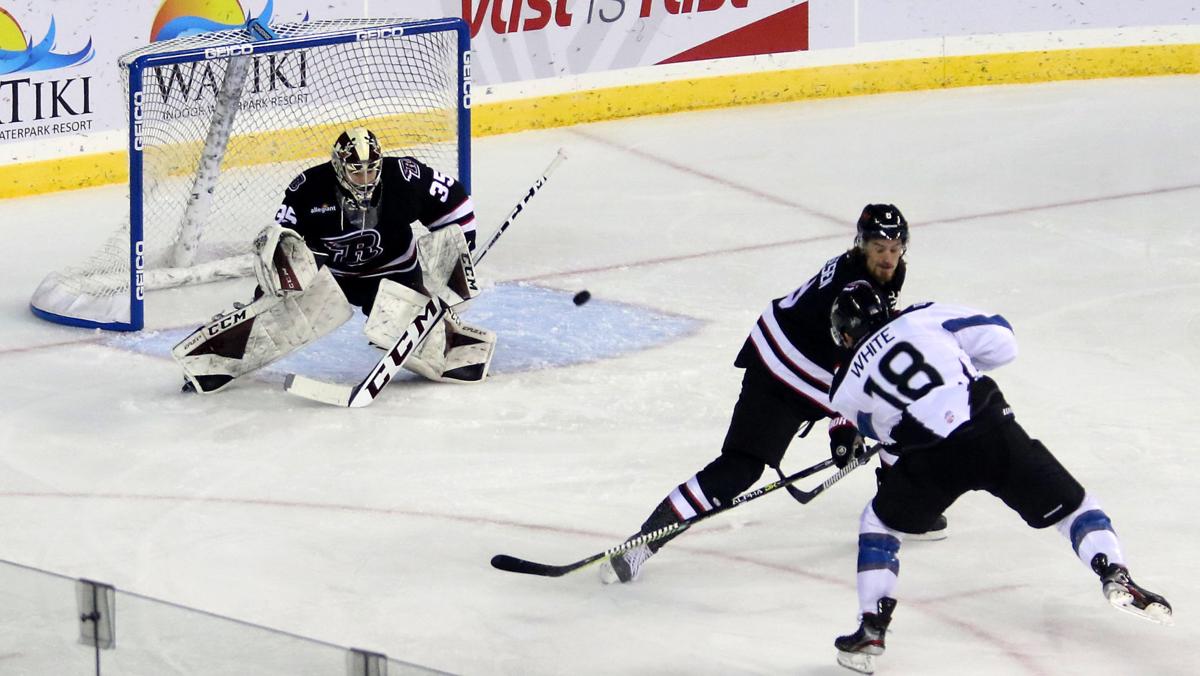 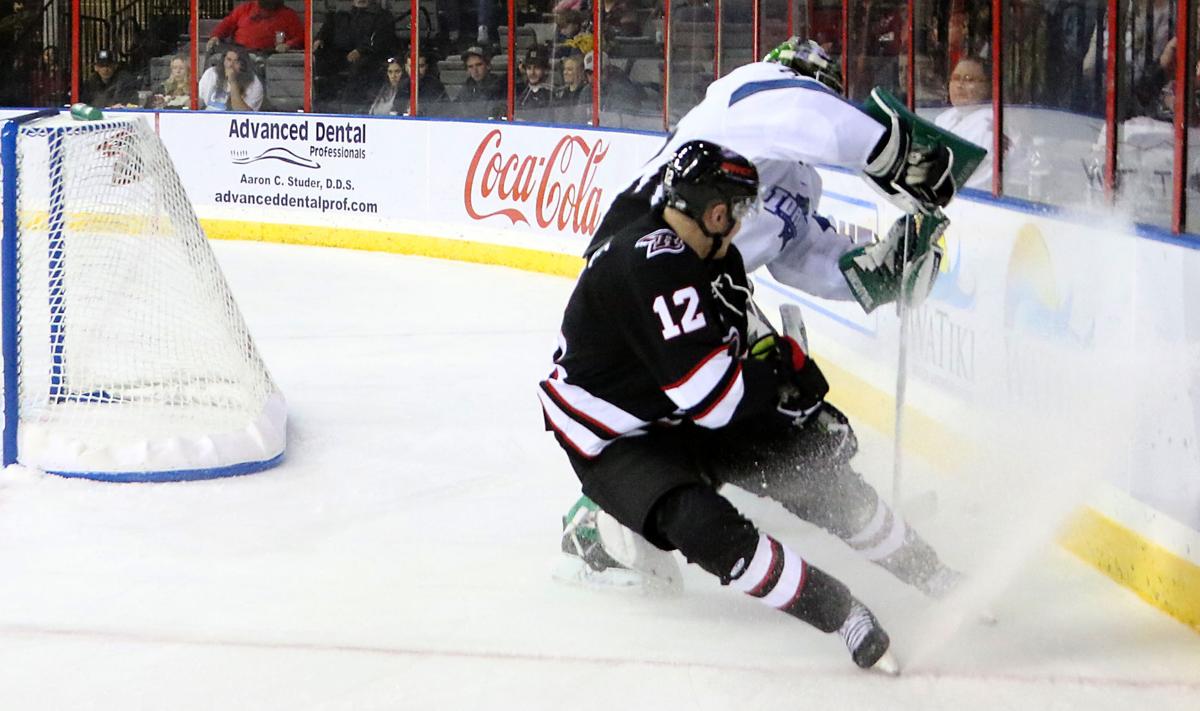 Rush forward Tanner Schachle (12) scored the only goal for Rapid City in his ECHL debut Wednesday at The Monument Ice Arena.