Giving up just 40 points in the last three games propelled the South Dakota Mines football team into a winning season. That improved defense was almost enough to give the Hardrockers a huge upset of Colorado Mesa University Saturday at O’Harra Stadium.

But the Mavericks, the top-ranked offense in the Rocky Mountain Athletic Conference, kicked a short field goal late in the game for a 13-10 win over the ‘Rockers in both teams’ regular-season finale.

The loss dropped Mines to 4-5 in conference play and 6-5 overall, the program’s first winning season since the 2015 campaign.

“Our seniors have done a fantastic job of laying down the foundation for the culture of this program,” said Mines head coach Charlie Flohr, who completed his first full season at the helm after last year’s 2-2 COVID-shortened year. “I can’t thank those nine seniors enough. I’m so extremely proud of our football team. They battled and kept us in a lot of football games.

"Obviously we wanted to end the season at 7-4, but it didn’t quite come up that way. But for us to have a winning record at 6-5, it says a lot about the foundation that has been laid for this program, and we’re really looking forward to the future.”

“It was a heck of an effort by the defense,” Flohr said. “I have been very proud of them. They really answered the bell in the last three weeks. Coach (Vance) Winter has done a phenomenal job with that defense, getting them ready to go. That team is No. 1 in the conference in points scored. Our defense did a good job of shutting them down. I’m very proud of their effort as a unit.”

The only big play of the game against the Mines defense came in the second quarter when redshirt freshman quarterback Karst Hunter found wide receiver Dwight Blakey on a 77-yard touchdown pass, on a play that Blakey turned out at the right time and grabbed the pass over a Hardrockers defender and raced into the end zone for the score.

That touchdown, at the 12:38 mark of the second quarter, put the Mavericks up 10-0. Kicker Lucas Ruiz-Diaz scored the game’s first points on a 38-yard field goal with the pesky wind at his back midway through the first quarter.

Mines finally got on the scoreboard late in the second quarter on a 31-yard field goal by Hardrockers placekicker Connor Taylor, who missed a 35-yarder early in the quarter.

That field goal was set up when Mesa punter Blake Moore basically kicked the football into the backs of his blocking wall for technically a Mines block, giving the Hardrockers the ball on the Mavericks 33-yard line. Senior safety Christian Singleton was credited with the block.

The Hardrockers defense came through again in the third quarter when junior Adrian Eastman took away a pass from a Mesa receiver for an interception and ran it back 38 yards to the 18-yard line.

“What a huge momentum play for us. It was a great interception by Adrian. He took the ball right out of the kids’ hands and got us in great field position for a touchdown to tie the game,” Flohr said.

The Hardrockers got another break on a facemask penalty as the offense was going backwards on third down, as they retained the ball on the 5-yard line on first down.

On third and goal, Mines redshirt freshman quarterback Jayden Johannsen hit freshman tight end Josh Leone on a 3-yard score, and Taylor’s kick tied the game at 10-10 with 1:29 to play in the third.

The Mines offense had a couple of opportunities to take the lead in the fourth quarter, but came up short against the wind. Early in the quarter, the Hardrockers put together an 11-play drive that got them on the Mesa 20-yard line, but an offensive holding penalty nullified a first down and two incomplete passes stalled the drive at the 30.

The Mavs took advantage and went on a 10-play scoring drive that resulted in a game-winning field goal, a 25-yarder by Ruiz-Diaz with 2:46 to play.

The Hardrockers still had one more chance for the win or tie, but failed to get the football downfield and stalled on four plays that gave the Mavericks the ball back on the 46-yard line. Eventually, after a big first-down pass to Dagan Rienks, Hunter kneeled twice to secure the win deep in Mines territory.

“What a great college football game,” Flohr said. “I’m proud of our kids. They battled through a full 60 minutes. Ultimately it just came down to (Mesa) making more plays at the end than we did. We had opportunities and just didn’t quite make them, and they did, and they ended up coming away with the victory.”

Johannsen paced the Mines offense, as he completed 13-of-26 passes for 114 yards and the one score, while leading the running attack with 73 yards on 12 carries. As a team, the Hardrockers ran for 114 yards, giving the ‘Rockers just 228 yards of total offense.

Junior receiver Jeremiah Bridges had 77 yards on four catches, with a long of 45 yards, while freshman Isaiah Eastman grabbed five passes for 27 yards.

On defense, freshman defensive back Kaleb Tischler had 10 tackles to pace the Hardrockers, with freshman linebacker Hunter Newsom adding nine stops, including a quarterback sack. Adrian Eastman had seven tackles, the one interception and one QB sack. Junior defensive end Kyante Christian had two quarterback sacks.

For the Mavericks, Hunter, a Miller native, was 21-of-26 passing for 299 yards and the one score. Darick Holmes had 66 yards rushing on 15 carries and Lionell McConnell had eight pass receptions for 108 yards. Blakey added six catches for 96 yards and the score.

Despite the loss, Flohr said they are looking forward to building off of this winning season for 2022.

“We have a lot of guys coming back and a really good freshmen group that we’re excited about,” he said. “Recruiting is moving forward for us as well. We feel bad for these seniors today that we didn’t get the victory for them, but I’m extremely happy for what they have done for me and our program.”

VIDEO: The 2021 Festival of Lights Parade 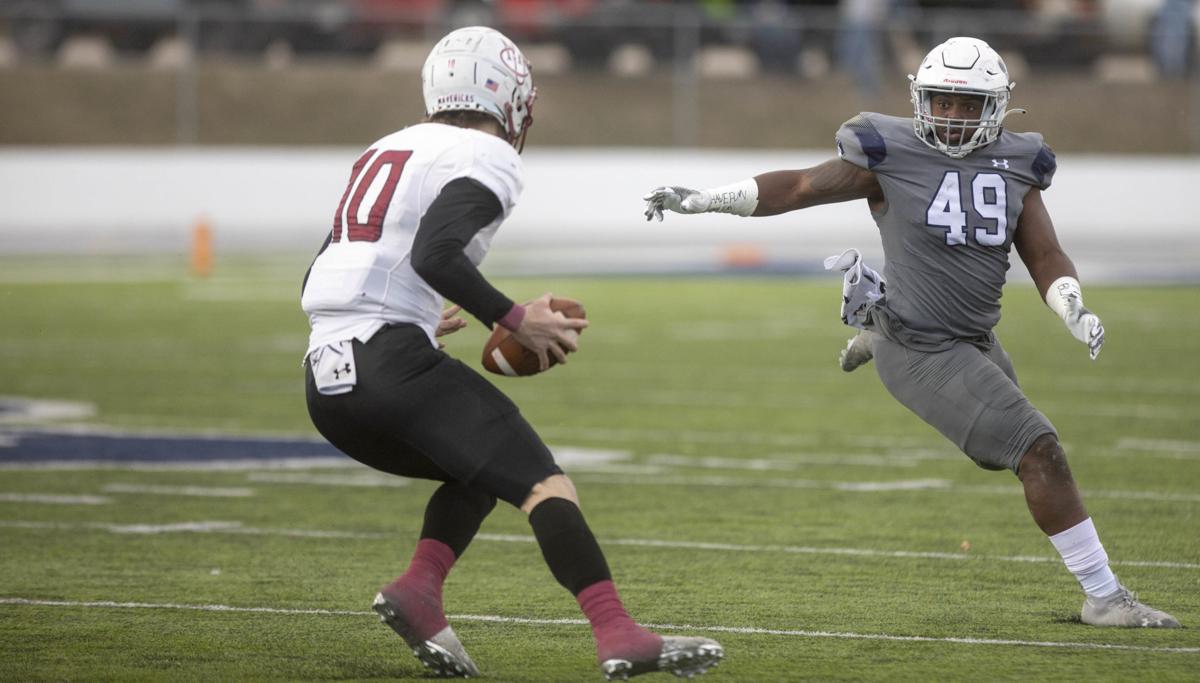 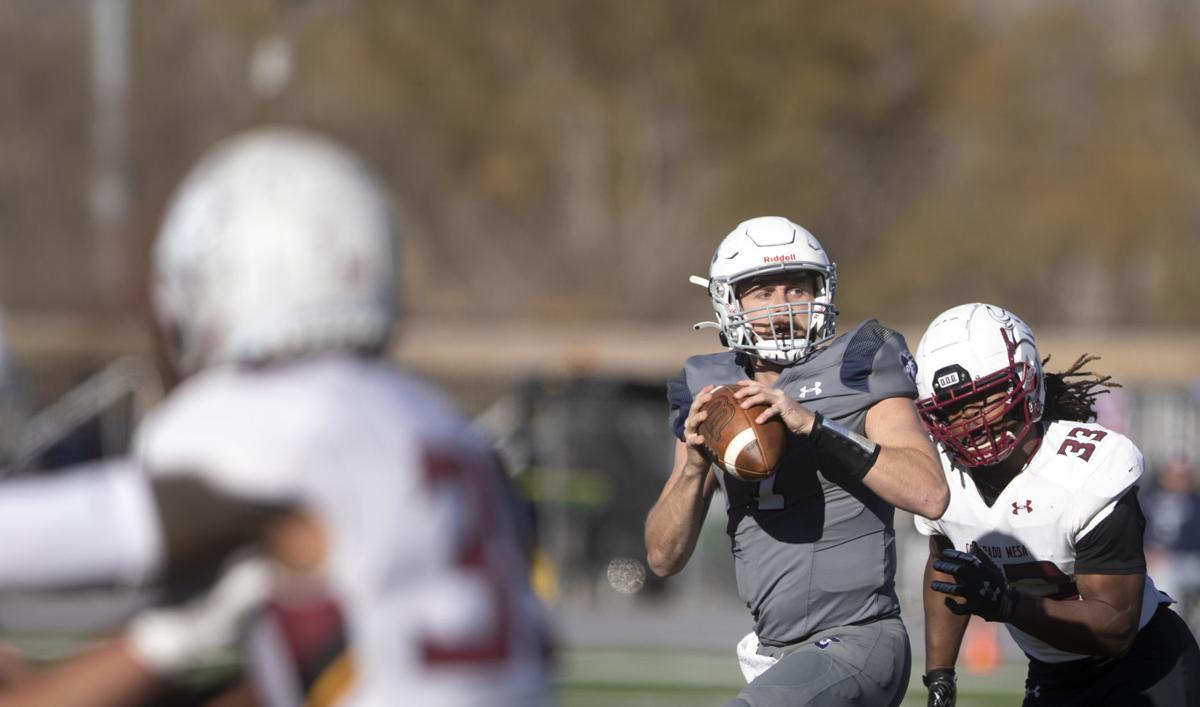 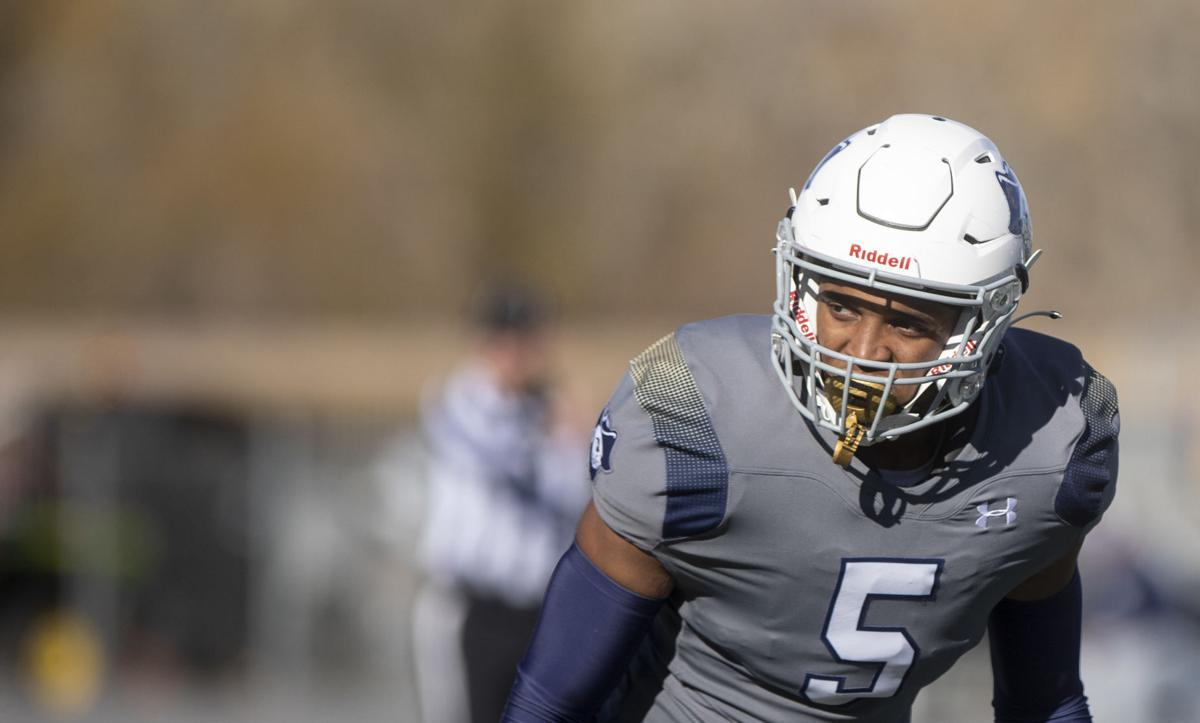 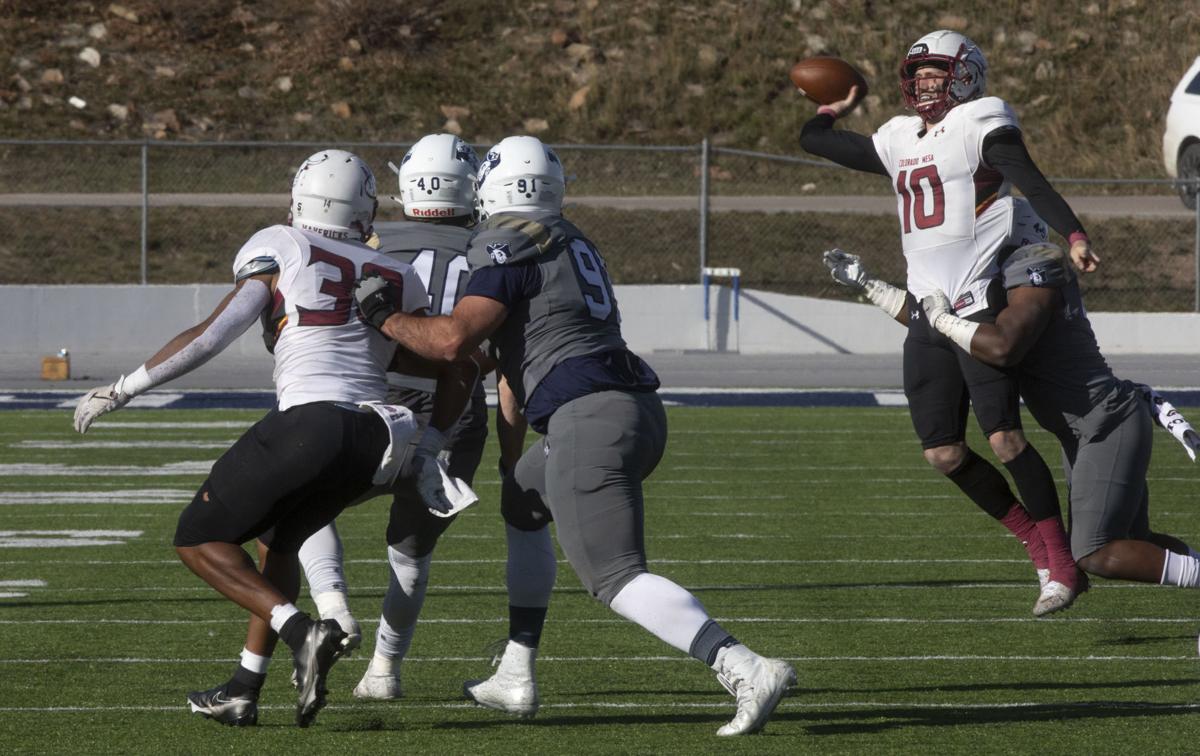 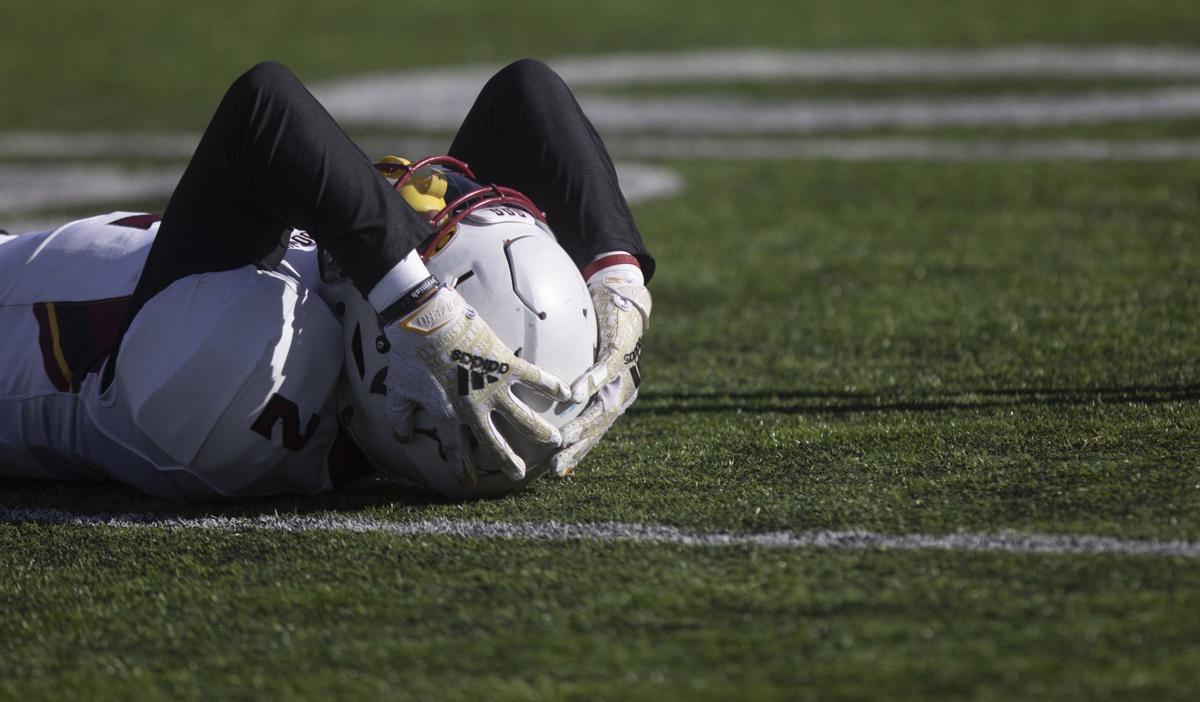 Colorado Mesa defensive back Damar'ren Mitchell lies on the ground after failing to intercept the ball during a passing play by South Dakota Mines on Saturday at O'Harra Stadium. 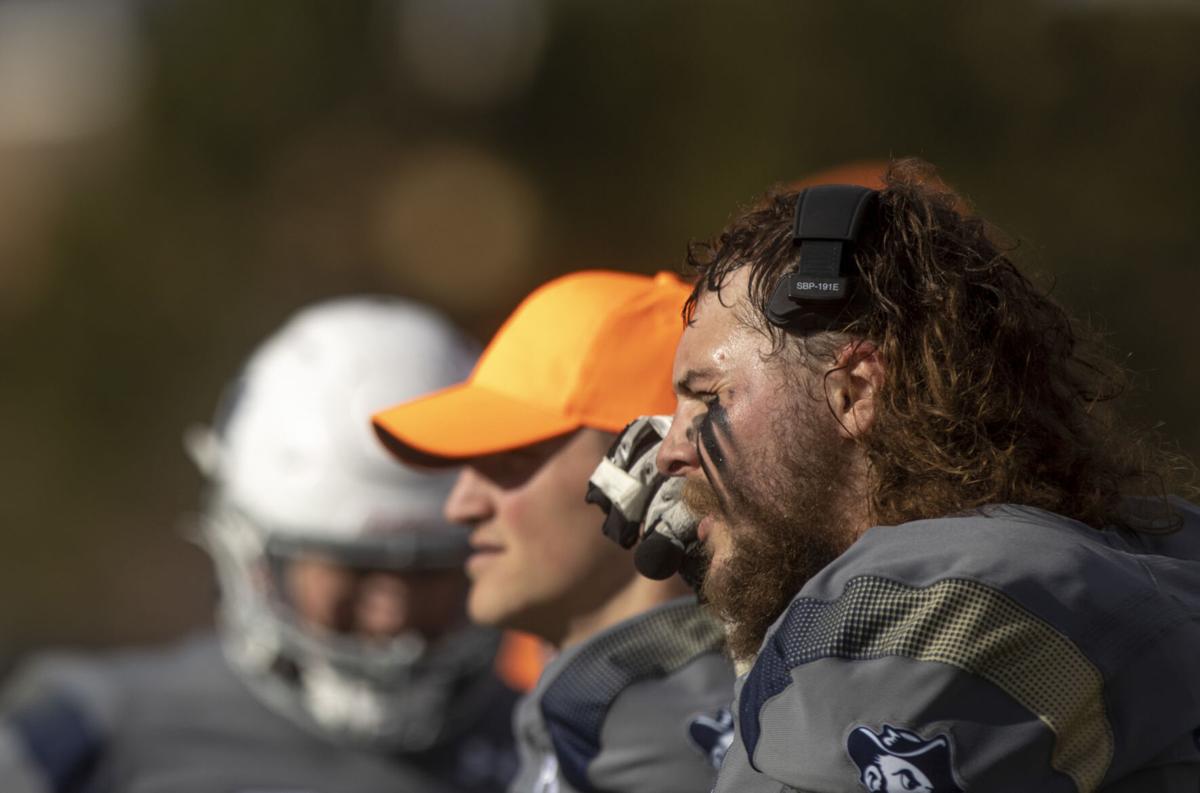 South Dakota Mines offensive lineman Austin Roth communicates through his headset during the game against Colorado Mesa on Saturday at O'Harra Stadium.