Plaintiffs are arguing that an amendment legalizing marijuana violates the South Dakota Constitution in harmful ways, while the defendants say it doesn’t and that the suit was brought too late and without standing.

“By failing to follow the proper constitutional procedure, the proponents of Amendment A deprived South Dakota voters of the opportunity to have Amendment A and its far-reaching and pernicious effects on our system of government properly scrutinized at a constitutional convention,” the plaintiffs argued.

We have “a scenario in which the state is essentially suing itself to determine whether it can avoid a law the voters passed,” a defendant wrote before asking the judge to throw out the lawsuit.

Pennington County Sheriff Kevin Thom and Highway Patrol Superintendent Rick Miller are asking a Hughes County judge to void Amendment A which was approved by 54% of voters statewide and 59% in Pennington County.

The lawsuit claims the amendment violates the state constitution by not following the “one-subject rule” and because it’s not an amendment but a revision that needed to be approved through a constitutional convention, a more complex process.

The defendants are the Secretary of State and South Dakotans for Better Marijuana Laws, which intervened along with four voters.

Judge Christina Klinger will be the first South Dakota judge to analyze whether a voter-approved amendment violates the one-subject rule, the parties noted. While legislators have had to limit laws to single subjects for years, voters have only had to follow it since Amendment Z passed in 2018. 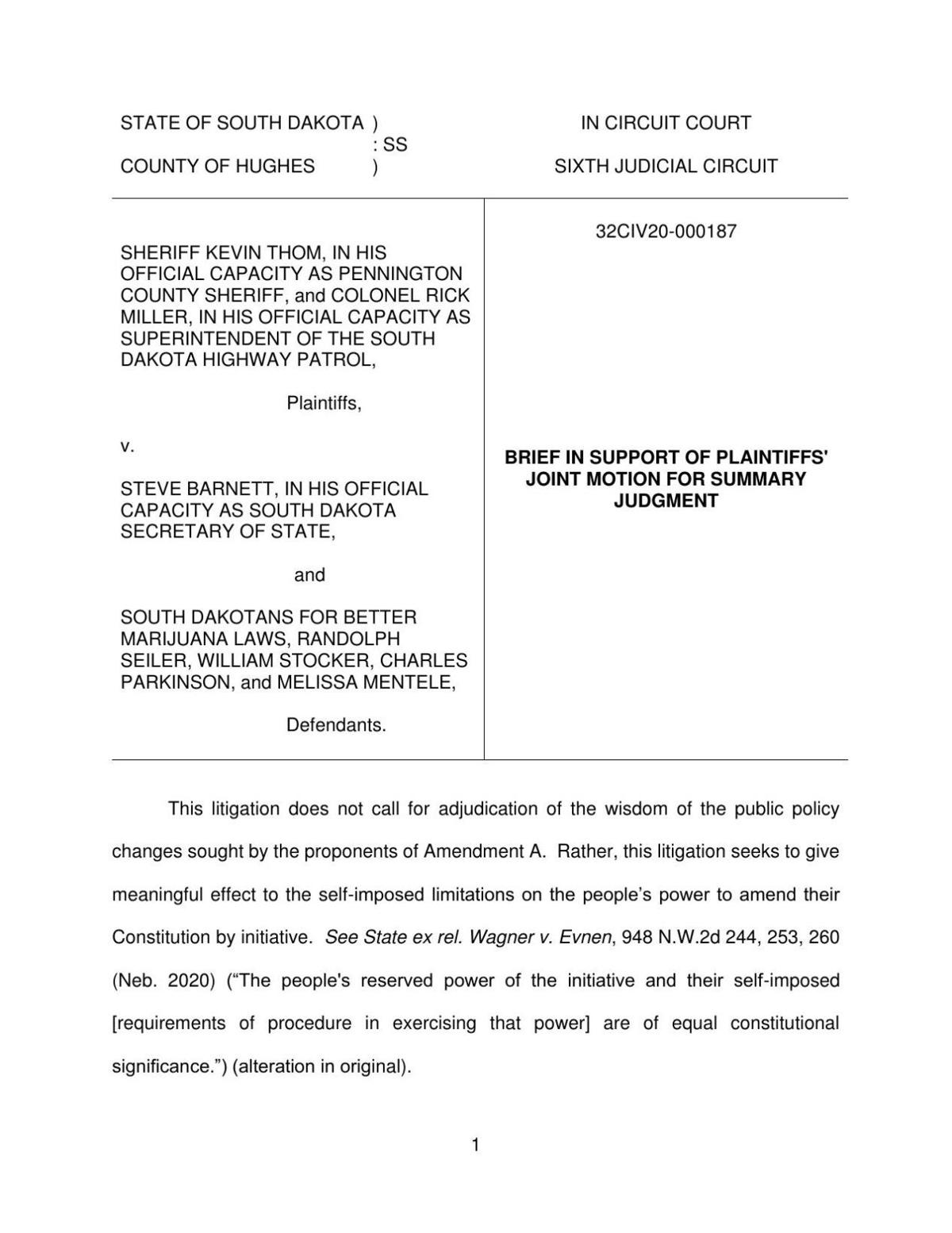 Lawyers for Thom and Miler say the lawsuit isn’t about “the wisdom” of the marijuana policy changes itself but the legality of the creation and text of the amendment.

The lawyers acknowledge the difference between a constitutional amendment and revision aren’t defined in the South Dakota Constitution but say the parameters are identified in other states and court rulings.

They say the amendment gives exclusive power to the Department of Revenue to regulate marijuana when usually it’s the Legislature that delegates powers to offices of the executive branch.

“Amendment A wrestles authority over marijuana from the legislative and executive branches and consolidates that power in a single independent agency with plenary authority,” the brief says.

The lawyers say the amendment interferes with other legislative and judicial roles while impacting 22 existing provisions in the constitution.

The brief says Amendment A addresses more than one topic and that South Dakota voters previously rejected three narrower measures related to hemp and medical marijuana.

Thom and Miller have a serious stake in the outcome of the lawsuit, their lawyers wrote.

“There can be little question that plaintiffs, as taxpayers, and as public officials who swore to uphold the constitution, are entitled to bring this public action,” they wrote. 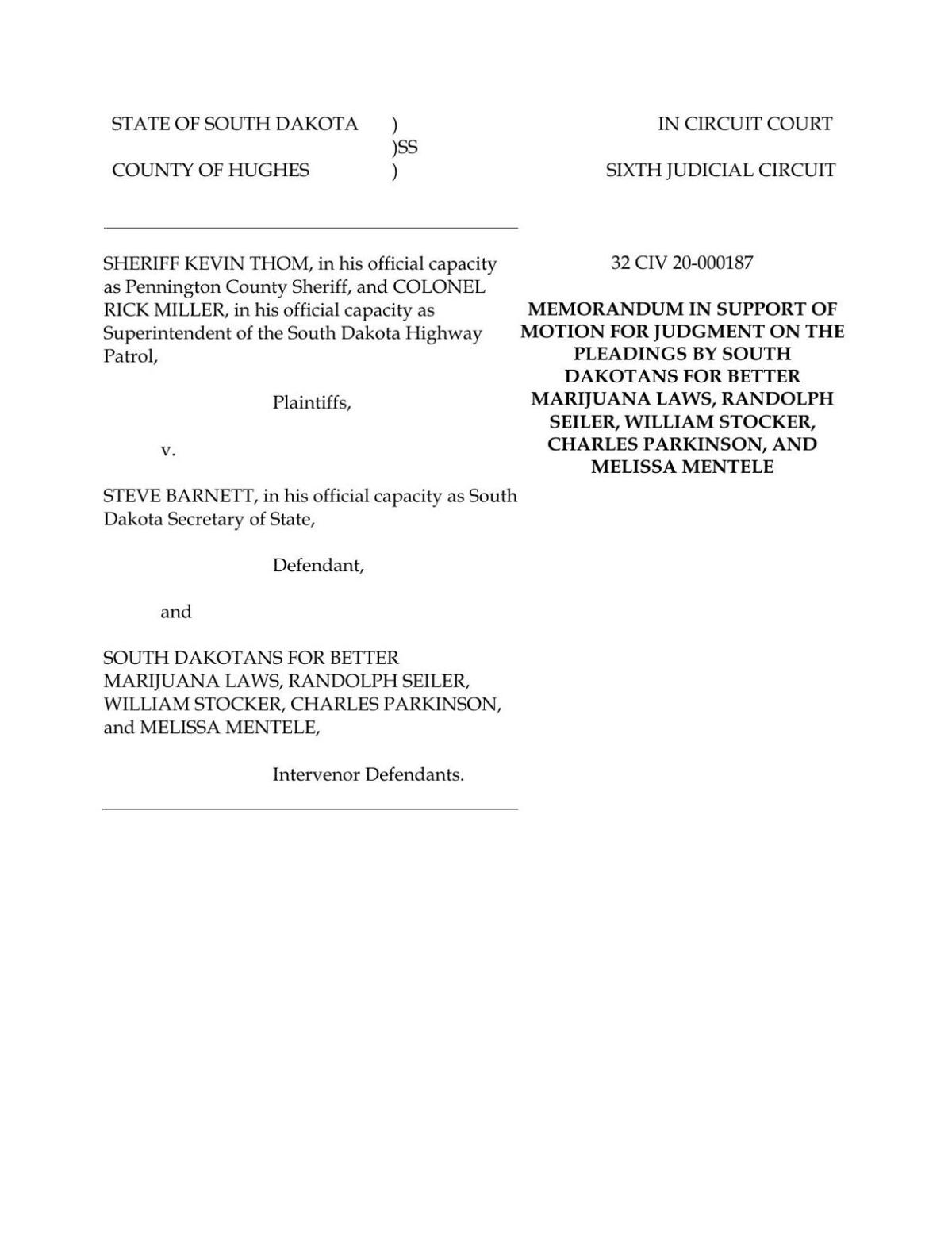 Lawyers for the marijuana group made the opposite argument: That South Dakota law prevents Thom and Miller from suing the state because they themselves are state officials.

Thom and Miller “have sworn to uphold the law, which includes laws passed by voters. Allowing officials to challenge laws they do not like undermines the rule of law and improperly injects the state into the election process," the memo says. 'Law enforcement officers may not pick and choose which laws they will uphold in their official capacities, and they may not use their offices to play politics."

“This is particularly concerning where, as here, the state appears to be paying at least some of the legal fees to allow a state official to sue the state,” the lawyers wrote.

The memo cites reporting by the Journal that explains that Gov. Kristi Noem approved state funds to pay for Miller’s defense. Thom’s lawyer and the spokeswoman for the sheriff’s office say taxpayer money is not being spent on his legal fees but won’t say if Thom or a third party is paying.

“The plaintiffs have not identified any basis — statutory or otherwise — for the expenditure of public funds to oppose election results,” the memo says.

The lawyers point to two state laws to argue that the lawsuit could and should have been filed before the election, not after.

Instead, Thom and Miller “chose to take their chances and campaign against Amendment A (which both plaintiffs openly did),” they wrote.

Filing after the election harms the supporters who got Amendment A on the ballot, the voters and — if the plaintiffs win —  all taxpayers who will have to cover legal fees, the memo says.

“Had the electorate voted in the way that plaintiffs preferred, the plaintiffs would happily abide by the results of the same election they now claim was void from the outset,” the lawyers wrote. “The reality that this lawsuit materialized only after the election demonstrates that the plaintiffs’ challenge is not aimed at the validity of the measure on the November 3, 2020 ballot, but rather targets the results of that election.” 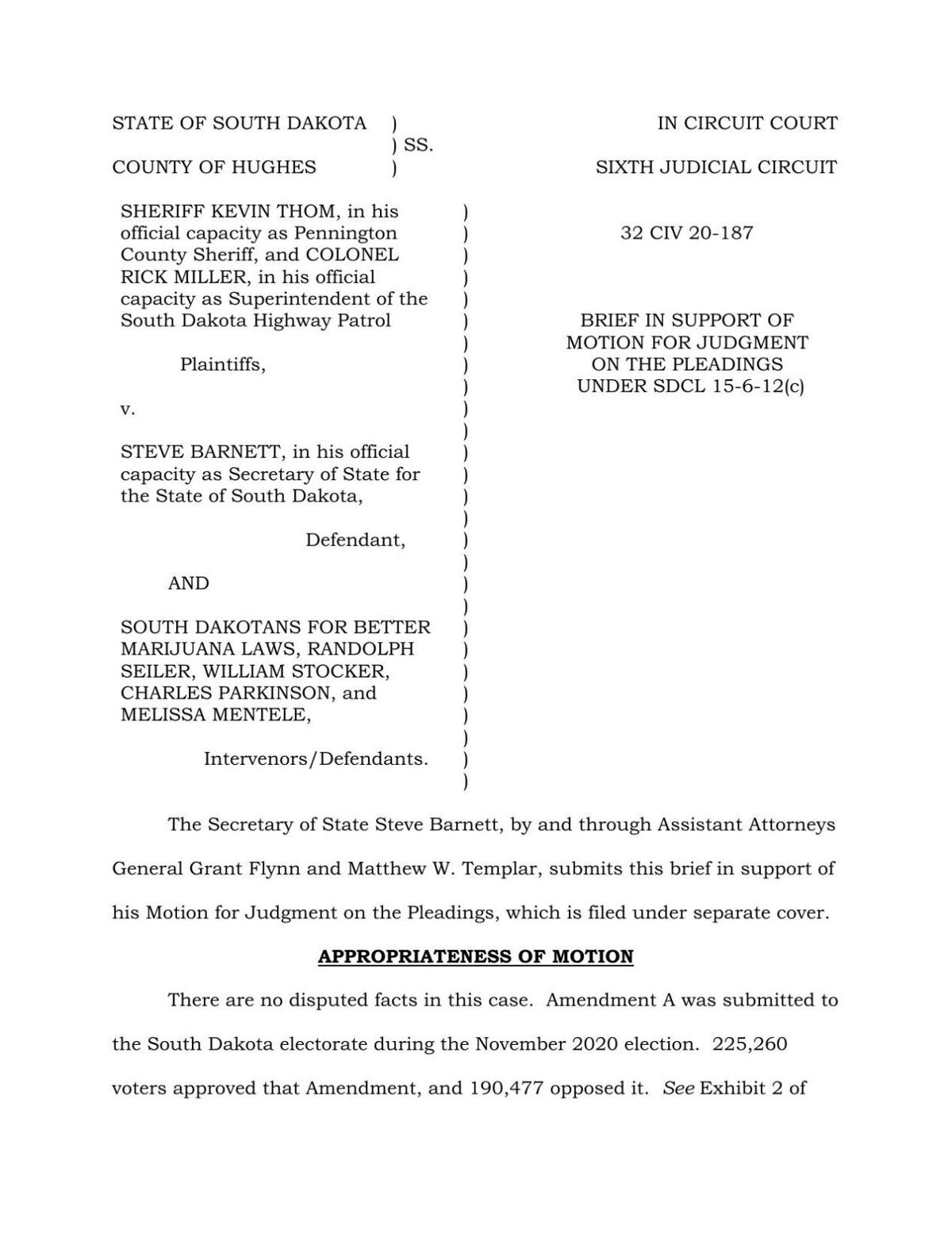 The marijuana group and Secretary of State — who's represented by two lawyers at the Attorney General's Office — both argue that Amendment A is indeed an amendment and only covers one topic.

“While different states have adopted a variety of tests to determine when a constitutional change is an amendment or a revision, they have consistently held that the authority of the citizens to alter their governing document is paramount; and the courts should only subvert the people’s will in the narrowest of circumstances,” the lawyers for the Secretary of State wrote in their memo.

The word “may” rather than "shall" in the part of the constitution about amendments and revisions means that amendments don’t have to limit themselves to amending existing articles, the lawyers wrote. Amendment A includes fines but will have no major impact on the constitution or separation of powers. The powers it gives to the DOR is what the Legislature might do if it legalized marijuana.

The lawyers turned to an analogy between laws regulating cannabis and corn when discussing the one-subject rule.

No hearings have been scheduled but the parties have until Jan. 8 to file responses.