Harney All Star catcher Bradley Woidt makes a catch and tag to stop a double steal for Sioux Falls and end the top of the sixth inning. 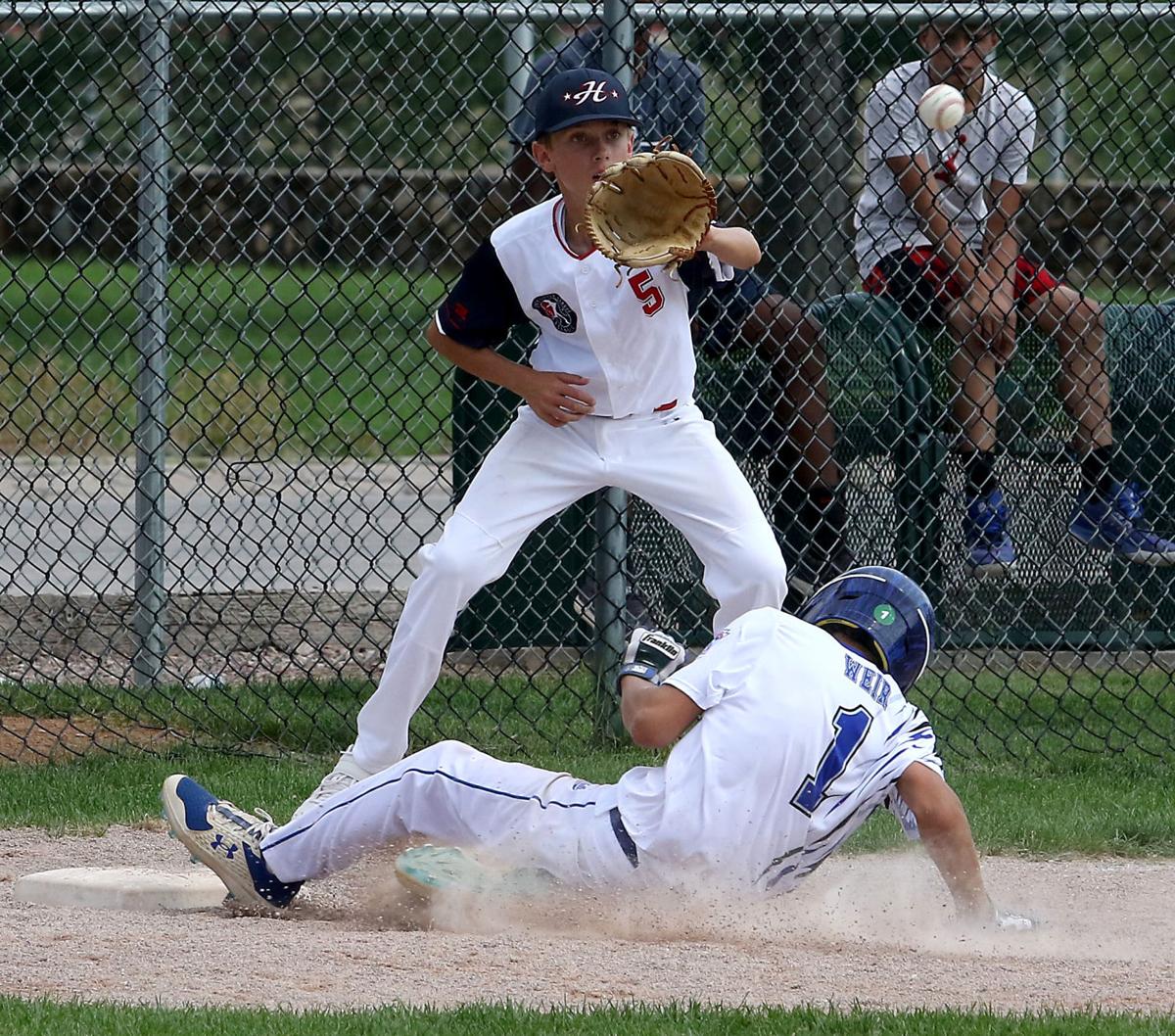 Harney's Conor Konvalin waits for a throw during a play at third base Saturday in his team's 3-0 loss to Sioux Falls. 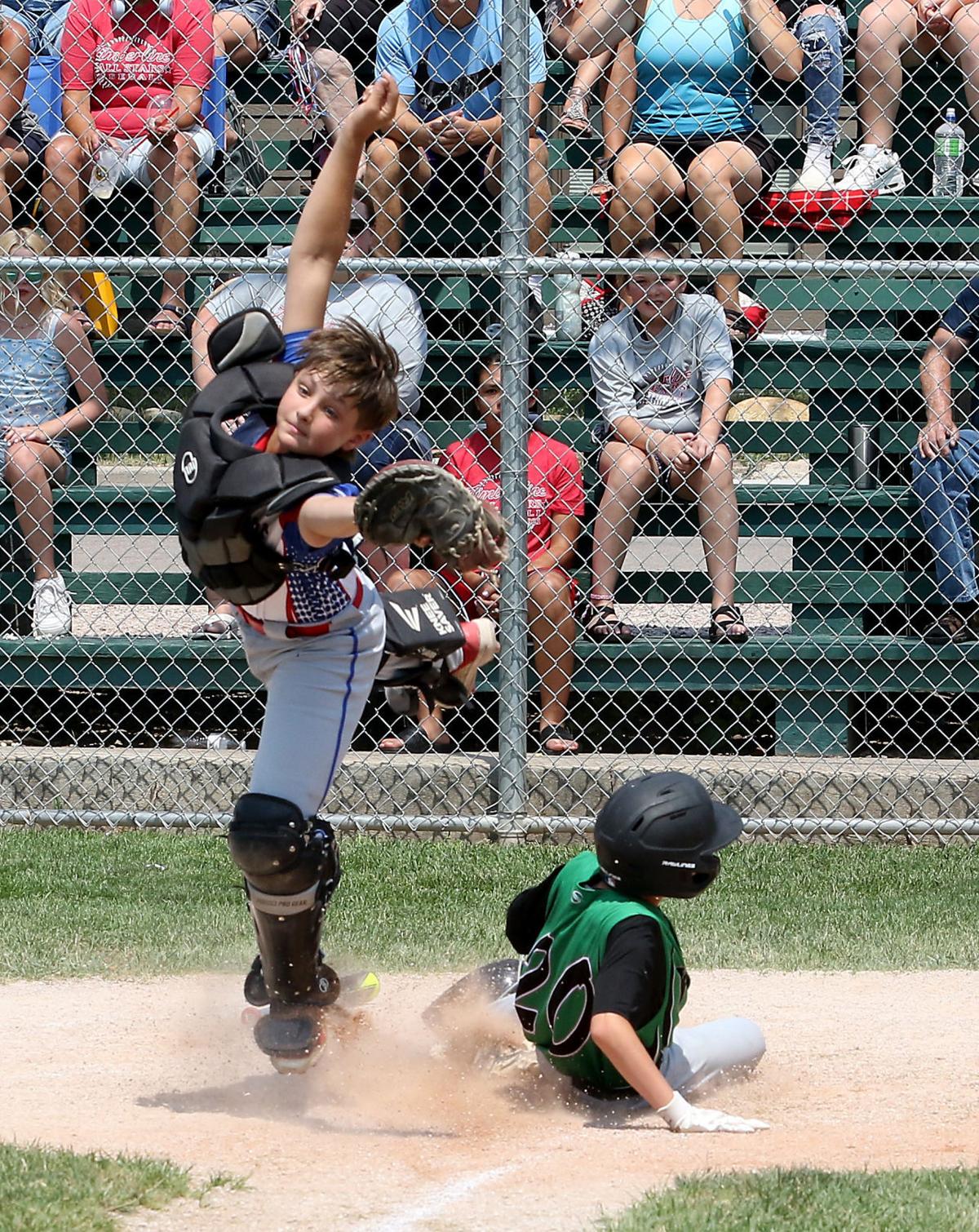 Timberline All Star catcher Bridger Mez makes a lunging grab while he tries to keep a foot on home plate for a force out. Timberline lost to Pierre to see their season come to an end Saturday. 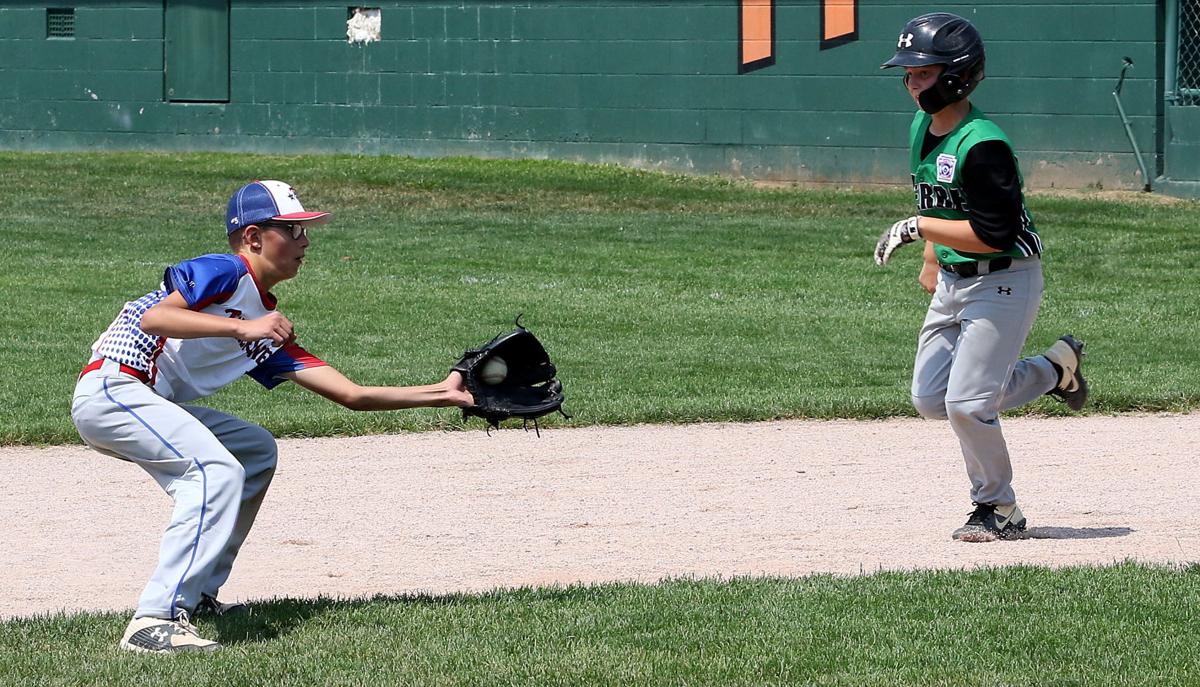 Timberline's Reegan Turnquist makes a play on a grounder in the first inning against Pierre Saturday. 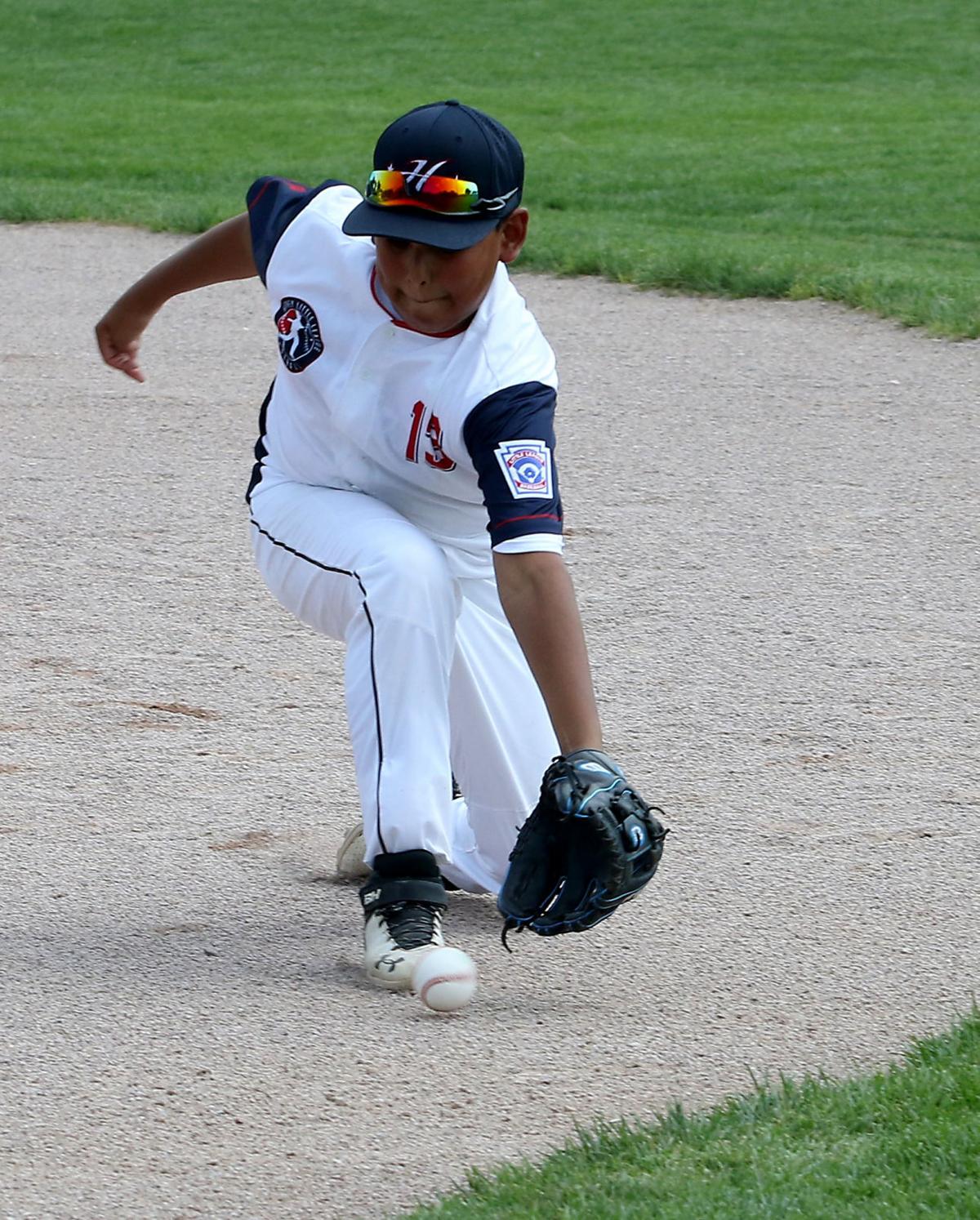 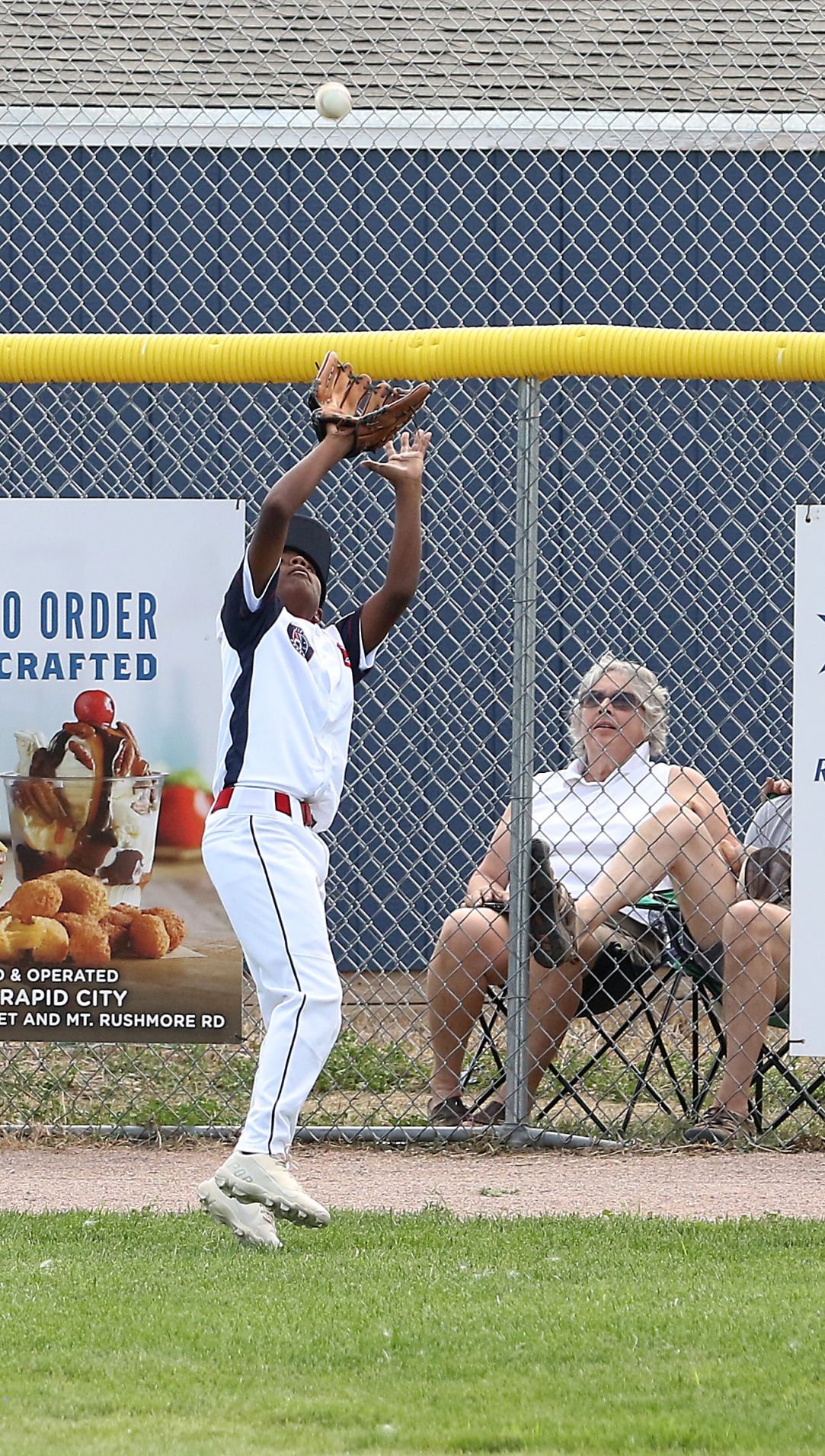 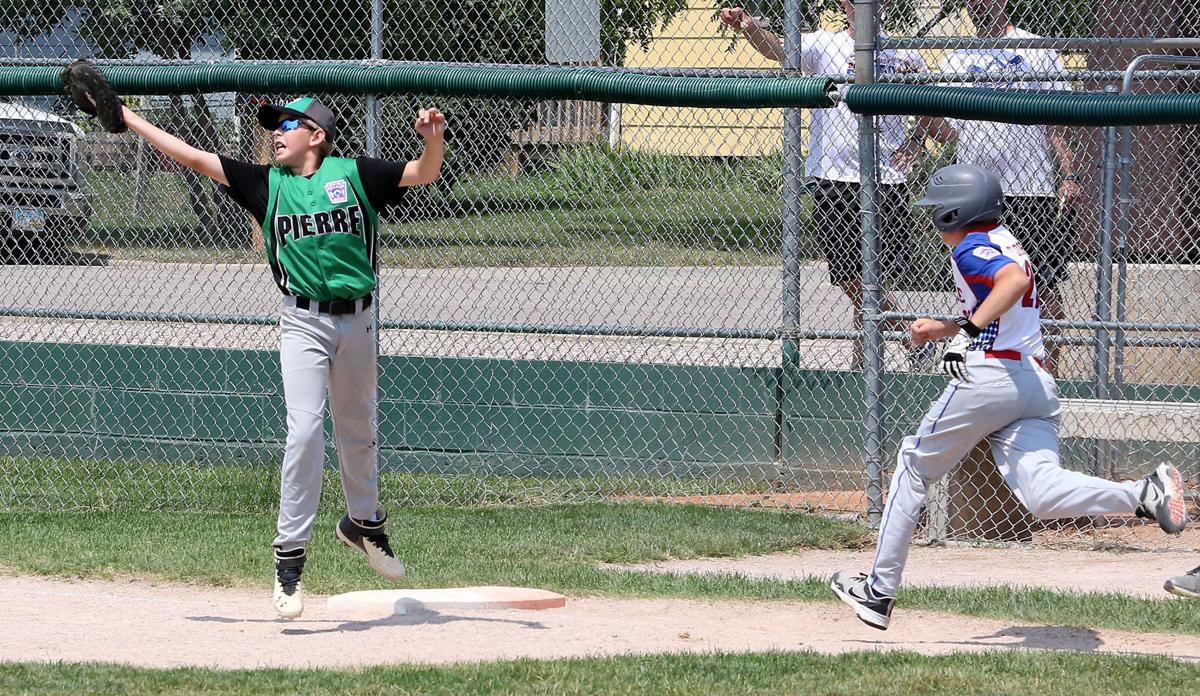 Timberline All Star Austin Flohr beats a throw to first base as the defender is pulled off the bag Saturday against Pierre.

The Sioux Falls All-Stars don’t need to score too many runs these days with the pitching staff that it has, and Gavin Weir proved it once again as he stopped the Harney All-Stars 3-0 Saturday in the semifinals of the South Dakota District 1 Little League State Tournament at Red Pesek Field.

Harney had just one hit against Weir and reliever Cason Mediger. Sioux Falls scored single runs in three innings, which proved to be more than enough to move on to the tournament championship game Monday night. Sioux Falls will play the winner of Sunday’s Harney and Capital City (Pierre) game.

“Their pitcher threw well. We did have guys on a few times, we couldn’t hit them in at critical times,” Harney manager Nick Wald said. “We went up and looked at too many pitches and didn’t get our bats going. If you don’t score any runs, it is going to be hard to win any game.”

Harney’s lone hit came in the fifth inning on a one-out single by Noah Wald. Weir walked two batters and struck out 13. Harney had six baserunners in the game, with its best chance to score with runners on first and third with two outs in the second, before Weir got out of the jam with a strikeout.

“What I always love to say is it is sports and anybody can lose a game, but when you send Gavin to the mound, you feel really good that he is there to compete for you, and when he has the stuff that he has and he wants to compete — he is one of our best competitors — you feel really good about that,” Sioux Falls manager Mike Gorsett said. “The good thing is we have some other guys who love to throw and who love to compete. Yeah, this is a really good pitching staff.”

In four postseason games — two in Sub-Districts and two at state — Sioux Falls hasn't given up a run.

Noah Wald pitched well for the Harney All-Stars, scattering nine hits but only one run was scored on a base hit. Sioux Falls scored its first two runs — in the first and fourth innings — on the first and third double steal attempt where the runner off of first gets in a rundown long enough for the runner on third to score.

Gorsett said it was a play his team worked on every day in practice, much to the players’ chagrin at times.

“The last week or so during practice I think the guys started going, ‘Oh, we’re going through first and third situations again,’” he said. “I kept preaching to the guys that this was going to pay off. We kept going through bunt coverages, we go through first and third on a daily basis. I just told our guys that this is why we did this, this is the monotonous time but we came through today. It was a huge part of the ballgame.”

Sioux Falls scored its third run of the game on a RBI single by Opland Sonnichsen in the fifth inning.

“Noah pitched well and battled hard,” Nick Wald said. “There were a few key plays that we didn’t make today, and that was the difference in the game. When you don’t make those plays, it is hard to win especially when they are pitching as well as they are.”

Mediger came on in the sixth inning and struck out the side, giving Sioux Falls 16 strikeouts of Harney’s 18 outs.

Nick Wald said the Harney All-Stars have to come out ready to hit on Sunday, something they didn't do Saturday. It will face a Capital City team that got past Timberline 11-8. First pitch is set for noon.

“Pierre is a good team, so we will have to leave it in the boys’ hands and they will have to come out and hit the ball,” he said.

Weir paced Sioux Falls with two hits, with seven other players also getting into the hit column.

Gorsett said it was big to get the win Saturday as they now get a day off, can save some pitching and enjoy the experience.

“I keep telling the kids that this is it for them, they don’t get to come back and do Little League again at the 12-year-old level, so enjoy this experience, have an enjoyable day off with your family and then come ready to roll on Monday,” he said. “We’re in the driver’s seat, but at no point are we being complacent or do we think we can’t lose two games on Monday. I’m interested to see the outcome from Sunday. They are two really good teams that can obviously come get us.”

The Pierre All-Stars jumped out to a big 7-1 lead in the first inning — on just one hit — and held on for the win to stay alive in the tournament.

It was a tough start for Timberline, which fell to Harney 3-0 in Friday’s opener. Capital City took advantage of four errors, a dropped third strike, two walks, one single and one hit-by-pitch.

Timberline scored three times in the third to cut the lead to 7-4, but Capital City scored two runs in each of the fourth and fifth innings before Timberline closed with four runs in the top of the sixth.

“It was just one of those deals where they wanted it more than we did,” Timberline manager Tyson Waddell said. “The defense didn’t fire like it needed to and the bats were flat. We got out-played.”

In the three-run third, all three outs that Timberline made in the inning came on the base baths — two at second and the third at home.

“There are a few things we could have changed, but it is a game made of plays. You have to make them to win,” Waddell said. “The season got cut shorter than we wanted it to be and now it is a West River vs. East River thing and cheer on Harney and hope they can bring it home.”

Timberline had 11 hits, with Austin Flohr leading the way with three this and Reegan Turnquist and Tucker Waddell finishing with two hits each. Tucker Waddell and Trevor Schlosser had two runs batted in each.

Despite seeing its season come to an end, Tyson Waddell said it was a pleasure to coach his players.

“I’ve had the experience of coaching these guys all summer on the field with multiple teams and All Stars. You can’t ask for a better group of guys,” he said. “They came down from behind before, they know what it takes to fight, it was the little things that needed one more spark and we couldn’t get it.”

Harney All Star catcher Bradley Woidt makes a catch and tag to stop a double steal for Sioux Falls and end the top of the sixth inning.

Harney's Conor Konvalin waits for a throw during a play at third base Saturday in his team's 3-0 loss to Sioux Falls.

Timberline All Star catcher Bridger Mez makes a lunging grab while he tries to keep a foot on home plate for a force out. Timberline lost to Pierre to see their season come to an end Saturday.

Timberline's Reegan Turnquist makes a play on a grounder in the first inning against Pierre Saturday.

Timberline All Star Austin Flohr beats a throw to first base as the defender is pulled off the bag Saturday against Pierre.