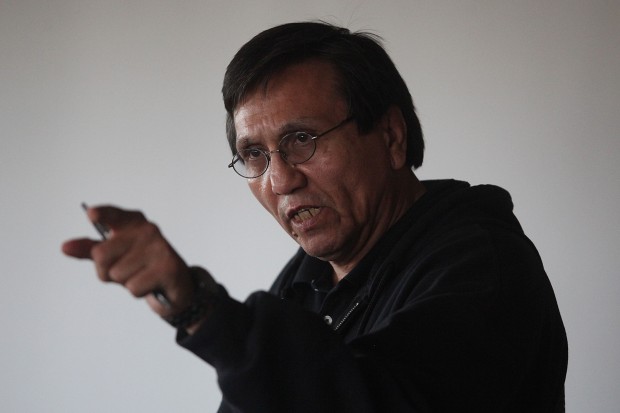 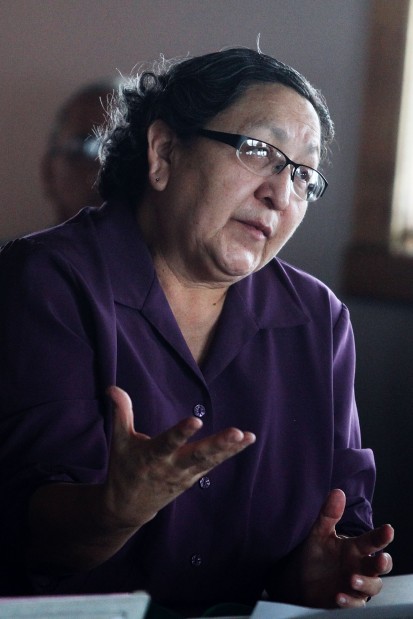 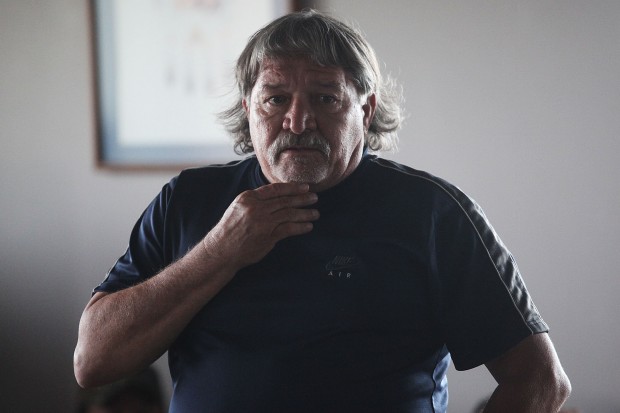 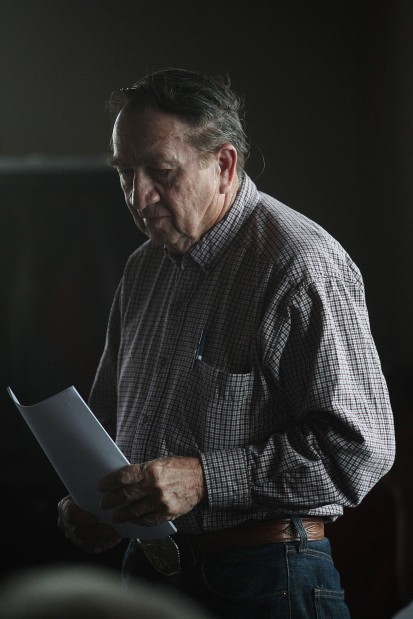 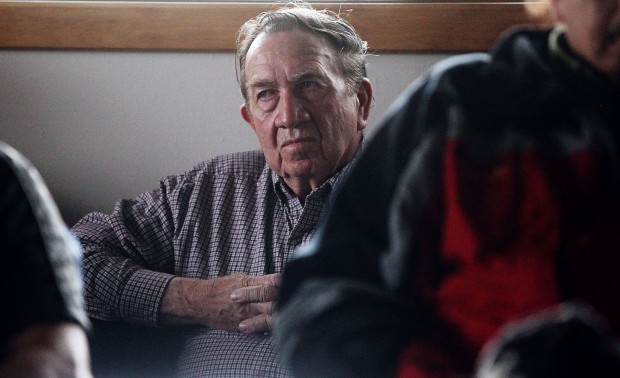 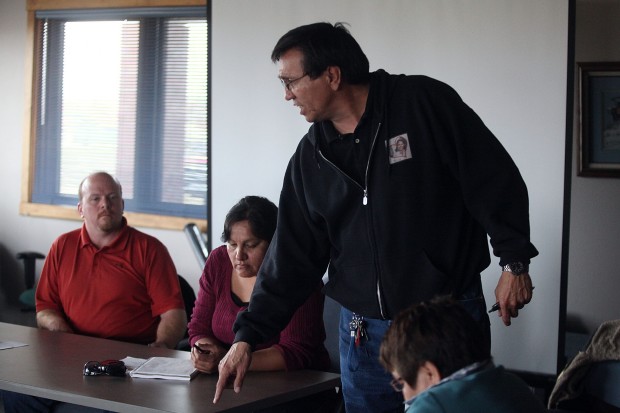 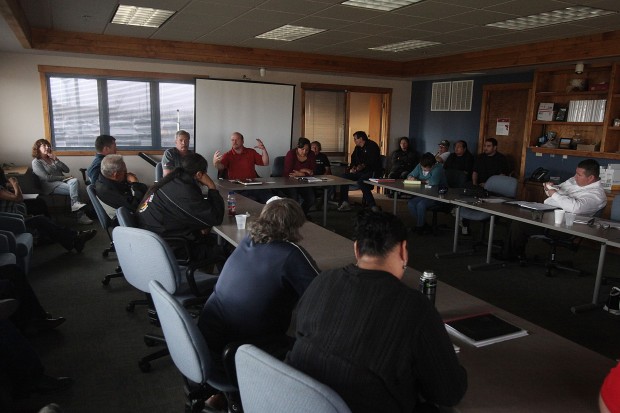 Officials from Milender White Construction speak to Pine Ridge contractors during a Department of Public Safety meeting at the LOWO building in Pine Ridge on Thursday, April 12, 2012. (Aaron Rosenblatt/Journal staff) 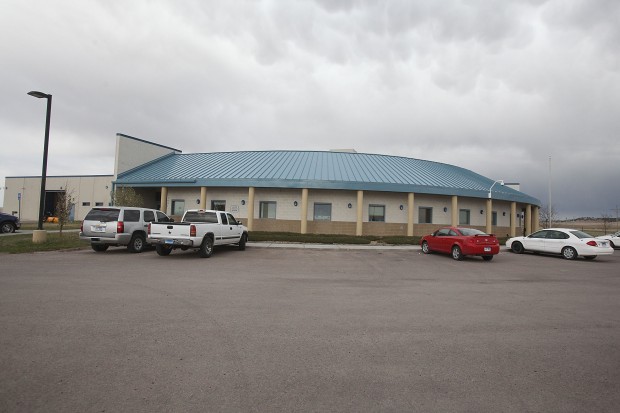 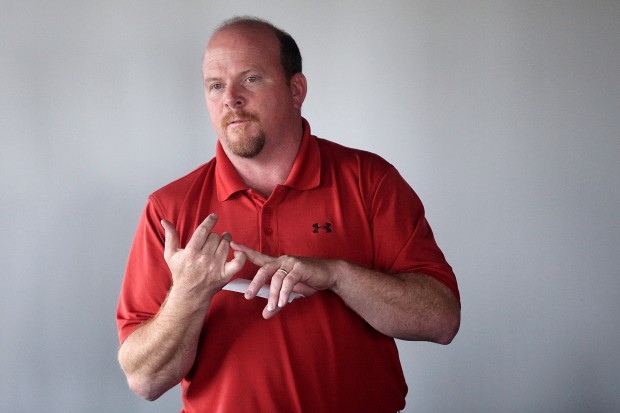 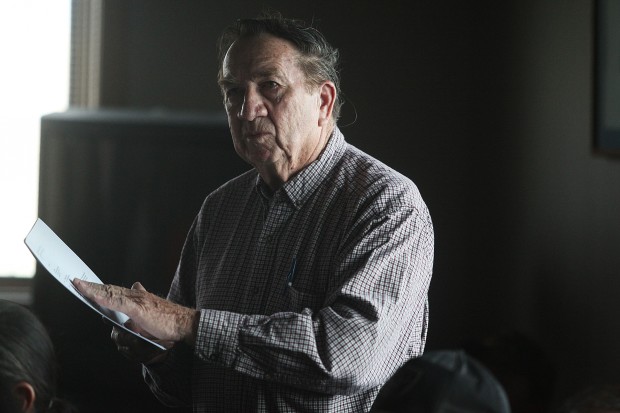 Louis Twiss of Native American Contracting & Supply asks why he was not awarded a contract during a Department of Public Safety meeting at the LOWO building in Pine Ridge on Thursday, April 12, 2012. Officials from Milender White Construction attended the meeting to explain to Pine Ridge contractors why their subcontract bids for the new Pine Ridge justice facility were not selected. (Aaron Rosenblatt/Journal staff) 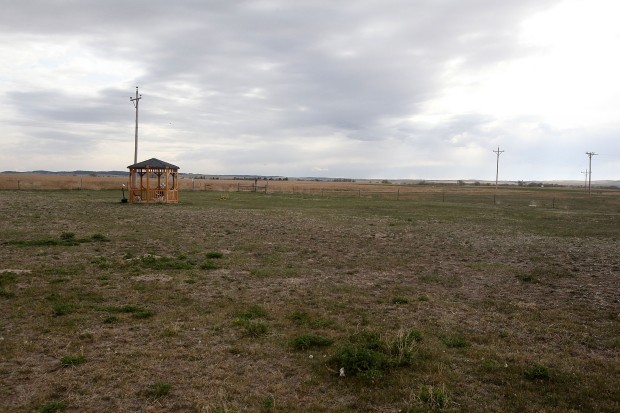 The site of the new Justice Center which be part of the Oglala Sioux Tribe adult jail near Pine Ridge on Thursday, April 12, 2012. (Aaron Rosenblatt/Journal staff)

Tensions ran high Thursday as Native American construction companies on the Pine Ridge reservation met to debate why they had only been awarded a quarter of the bids for a $28.5 million justice center project.

Reservation-based construction companies face several challenges when they bid to work on large construction projects. For one thing, contractors on the reservation cannot use land to take out bonds to fund projects, because reservation land is trust land and not taxed by the federal government.

“Banks won’t come anywhere near the reservation,” said Dustin Twiss, who with his father lost a bid on a communication system for the new facility. “You’d be lucky to make a payday loan, let alone a half a million dollar bond down here, unless you have 100 percent of the assets.”

Some contractors, like Mike Carlow, who has been in business 23 years and owns Carlow Enterprises, think the tribal government should step in and designate funding to back their businesses. Other companies think startups should have to earn their own ability to take out bonds, said Cordelia White Elk, director of the Tribal Rights Employment Office.

The bidding process, which was designed to give Native American reservation-based companies preference in the project, allowed reservation companies an early bidding period; contractors typically all bid at the same time. Some contractors at the meeting were concerned that the method allowed their contractors and suppliers to let other sub-contractors know what people were bidding, so they could underbid.

After the early bidding period, Denver-based Milender White Construction Company opened the bidding process to off-reservation companies for leftover parts of the project.

Louis and Dustin Twiss said they felt treated unfairly because off-reservation companies might be able to find out what they bid and underbid them later in the process.

“We feel like we can go to Denver and bid on the open market and be competitive,” said son Dustin Twiss. “Yet we can’t be competitive right here in our corner, in the middle of nowhere in South Dakota.”

The project will house the Oglala Sioux Tribe’s jail, police force and judicial system in one 93,642-square-foot building southwest of the current adult jail near the Nebraska border. It is being overseen by Milender White, which is obligated to give preference to Native Americans in the subcontractor bidding process because the project is on the reservation.

Companies from the Pine Ridge reservation put in 22 bids on the project. Adam Mack, operations manager for Milender White, considered six of those bids, totaling about $10 million, and the rest of the project was bid off the reservation. The reservation bids were for earthwork, utilities, concrete, food service equipment and mechanical and electrical work.

About a dozen other tribal contractors were at a heated, 90-minute special meeting of the Oglala Sioux Tribe Department of Public Safety on Thursday.

Tribal and construction companies overseeing the bidding process have communicated poorly, said Carlow. He bid on six parts of the justice center and was recommended as a contractor for two.

In addition, many companies are used to handling $200,000 or $300,000 projects and don’t have the employees or budget to jump to a several million dollar project, Mack said.

“They’re not exposed to this many large opportunities, so if we were doing housing, some foundations, siding, painting — great, fantastic,” he said. “If you’ve got a guy that tries to get 10 times bigger all at once, he will fail. It just happens.”

Ken Soderlin, owner of Sod’s Mechanical, was recommended to provide plumbing and heating work for the building. He bid the project at $6,553,500, less than 4 percent over the bid budget of $6,316,152. He said he reached an agreement with Milender White and was planning to take on the project when the company said he needed to cut his budget further. The construction company was working to cut $3 million from the project budget at the tribe’s request.

“They’re basically saying we’re $1 million over budget when we were supposedly within thousands of dollars,” he said. “It’s quite a contrast, when you think you have the job.”

A patient who tested positive for coronavirus at Monument Health was also a caregiver there who worked in the cancer care institute.

A Monument Health caregiver from Meade County has tested positive for the coronavirus, which is the first case diagnosed in the Black Hills.

South Dakota has 10 new cases of coronavirus in the state according to the daily Health Department report.

The warden of the South Dakota Women's Prison in Pierre resigned Tuesday, the day after nine inmates walked away from the prison's minimum-sec…

There is one new positive coronavirus test in Pennington County and 22 new positive results in the state Sunday.

Not everyone will get checks for virus economic relief. Here's how to find out your status.

Texas Roadhouse CEO Kent Taylor is giving up his salary and bonus for the year to pay the steakhouse chain's front-line employees during the virus pandemic.

Inmates, loved ones describe fear in prison where woman tested positive for COVID-19

Officials from Milender White Construction speak to Pine Ridge contractors during a Department of Public Safety meeting at the LOWO building in Pine Ridge on Thursday, April 12, 2012. (Aaron Rosenblatt/Journal staff)

Louis Twiss of Native American Contracting & Supply asks why he was not awarded a contract during a Department of Public Safety meeting at the LOWO building in Pine Ridge on Thursday, April 12, 2012. Officials from Milender White Construction attended the meeting to explain to Pine Ridge contractors why their subcontract bids for the new Pine Ridge justice facility were not selected. (Aaron Rosenblatt/Journal staff)

The site of the new Justice Center which be part of the Oglala Sioux Tribe adult jail near Pine Ridge on Thursday, April 12, 2012. (Aaron Rosenblatt/Journal staff)